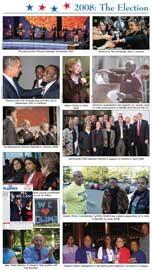 July 27, 2004 – A little-known senator from Illinois makes a speech before the Democratic National Committee that propels him into the national spotlight.

Feb. 10, 2007 — Obama declares his candidacy in Springfield, Ill. The crowd endured sub-zero temperatures to hear his views on everything from health care to the war in Iraq.

Jan. 8, 2008 – Hillary Clinton wins New Hampshire Democratic Primary after she appears to shed a tear about the personal nature of the campaign.

Jan. 22, 2008 – Famous actor and senator, Fred Thompson, drops out of the Republican race.

Jan. 29, 2008 – John McCain wins Florida primary, while Rudy Giuliani drops out after finishing third. This win propels McCain to the front of the pack.

March 17, 2008 – Hillary Clinton claims to have run under the bullets of sniper fire in war-torn Bosnia in the '90s when she was the First Lady; video of her tour shows otherwise.

April 29, 2008 – Obama denounces "incendiary" remarks made by his pastor of 20 years, the Rev. Jeremiah Wright. He eventually resigns from Trinity Unity Church a month later.

June 5, 2008 – Rival Hillary Clinton announces she will be suspending her bid for the White House. In subsequent weeks, she puts her support behind Obama, bucking a historic trend that caused other presidential nominees to lose their races.