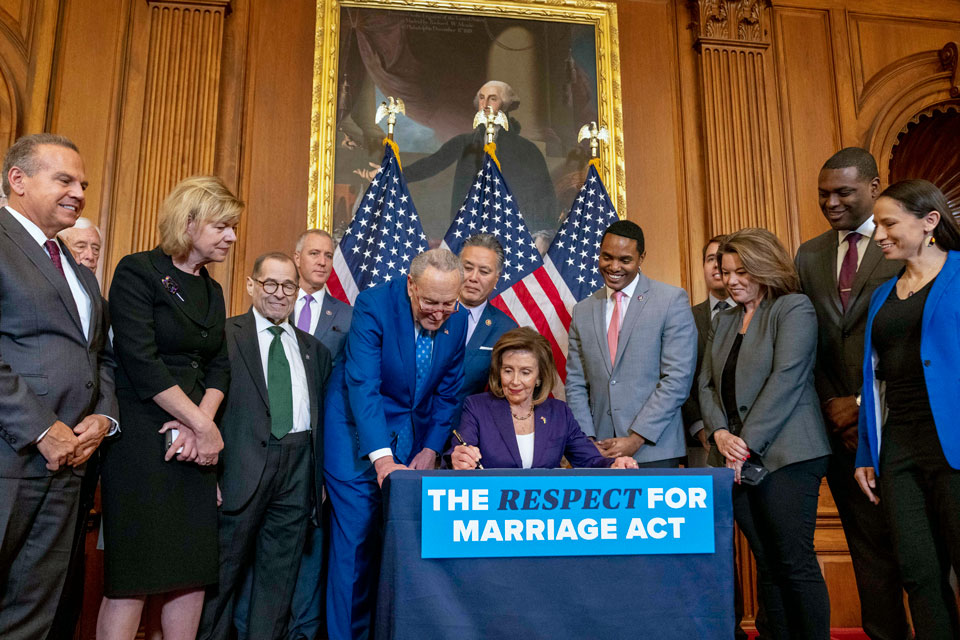 WASHINGTON (AP) — The House gave final approval Thursday to legislation protecting same-sex marriages, a monumental step in a decadeslong battle for nationwide recognition of those unions that reflects a stark turnaround in societal attitudes.

President Joe Biden is expected to promptly sign the measure, which requires all states to recognize same-sex marriages. It is a relief for hundreds of thousands of couples who have married since the Supreme Court’s 2015 decision that legalized those marriages and have worried about what would happen if the ruling were overturned.

The bipartisan legislation, which passed 258-169 with almost 40 Republican votes, would also protect interracial unions by requiring states to recognize legal marriages regardless of “sex, race, ethnicity, or national origin.” After months of negotiations, the Senate passed the bill last week with 12 Republican votes.

House Speaker Nancy Pelosi, who presided over the vote as one of her last acts in leadership before stepping aside in January, wiped her eye as she became emotional before signing the bill, which sent it to the White House immediately after the vote. She called the bill “a glorious triumph of love and freedom.”

Democrats moved the bill quickly through the House and Senate after the Supreme Court’s June decision that overturned the federal right to an abortion. That ruling included a concurring opinion from Justice Clarence Thomas that suggested the 2015 Obergefell v. Hodges decision legalizing same-sex marriage could also be reconsidered.

In debate ahead of the vote, several gay members of Congress talked about what a federal law would mean for them and their families. Rep. Mark Pocan, D-Wis., said he and his husband should be able to visit each other in the hospital just like any other married couple and receive spousal benefits “regardless of if your spouse’s name Samuel or Samantha.”

Rep. Chris Pappas, D-N.H., said he was set to marry “the love of my life” next year and that it is “unthinkable” that his marriage might not be recognized in some states if Obergefell were to be overturned.

“The idea of marriage equality used to be a far fetched idea,” said Rep. David Cicilline, D-R.I. “Now it’s the law of the land and supported by the vast majority of Americans.” 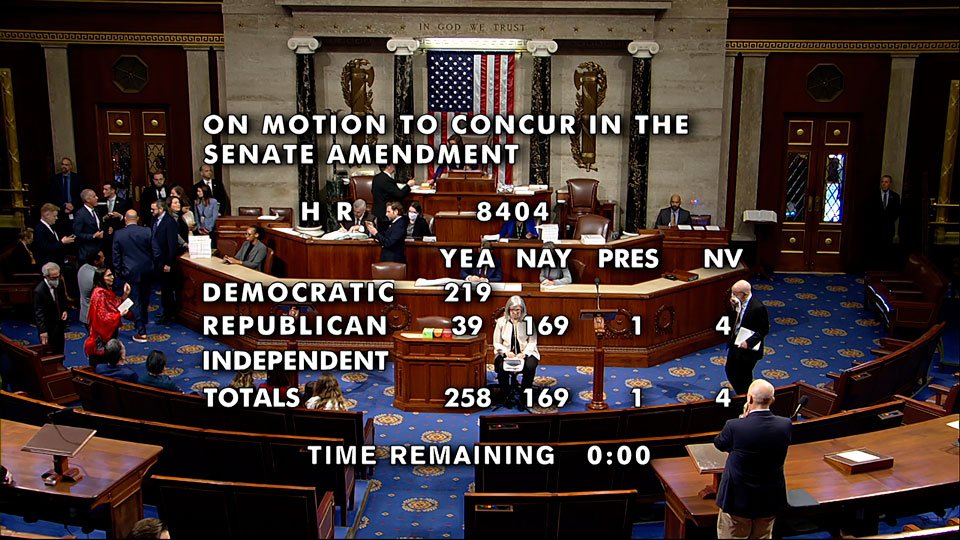 In this image from House Television, the vote total with final passage of the bill with protections for same-sex marriages is shown, on the House Floor, Thursday, Dec. 8, 2022, in Washington. The bipartisan legislation, which passed 258-169, would also protect interracial unions by requiring states to recognize legal marriages regardless of "sex, race, ethnicity, or national origin." (Senate Television via AP)The legislation lost some Republican support since July, when 47 Republicans voted for it — a robust and unexpected show of support that kick-started serious negotiations in the Senate. But most of those lawmakers held firm.

“To me this is really just standing with the Constitution,” said Republican Rep. Ann Wagner of Missouri, who voted for it both times. She pushed back on GOP arguments that it would affect religious rights of those who don't believe in same sex marriage.

“No one’s religious liberties are affected in any way, shape or form,” Wagner said.

Republican Rep. Chris Stewart of Utah said he was “proud to once again vote in favor of protecting our LGBTQ and religious friends and neighbors.” He praised Senate changes to the bill ensuring that it would not affect current rights of religious institutions and groups.

“Civil rights are not a finite resource, we do not have to take from one group to give to another," Stewart said.

The legislation would not require states to allow same-sex couples to marry, as the Supreme Court's 2015 Obergefell v. Hodges decision now does. But it would require states to recognize all marriages that were legal where they were performed and it would protect current same-sex unions if the Obergefell decision were overturned.

While it's not everything advocates may have wanted, passage of the legislation represents a watershed moment. Just a decade ago, many Republicans openly campaigned on blocking same-sex marriages; today more than two-thirds of the public support them.

Still, most Republicans opposed the legislation and some conservative advocacy groups lobbied aggressively against it in recent weeks, arguing that it doesn’t do enough to protect those who want to refuse services for same-sex couples.

“God’s perfect design is indeed marriage between one man and one woman for life,” said Rep. Bob Good, R-Va, ahead of the vote.

“And it doesn’t matter what you think or what I think, that’s what the Bible says.”

Rep. Vicky Hartzler, R-Mo., choked up as she begged colleagues to vote against the bill, which she said undermines “natural marriage” between a man and a woman.

“I’ll tell you my priorities,” Hartzler said. “Protect religious liberty, protect people of faith and protect Americans who believe in the true meaning of marriage.”

Democrats in the Senate, led by Wisconsin's Tammy Baldwin and Arizona's Kyrsten Sinema, worked with supportive Republican senators to address those GOP concerns by negotiating changes to clarify that the legislation does not affect the current rights of private individuals or businesses. The amended bill would also make clear that a marriage is between two people, an effort to ward off some far-right criticism that the legislation could endorse polygamy.

In the end, several religious groups, including The Church of Jesus Christ of Latter-day Saints, came out in support of the bill. The Mormon church said it would support rights for same-sex couples as long as they didn’t infringe upon religious groups’ right to believe as they choose.

Personal meaning for some

Republican Sen. Susan Collins of Maine, who led negotiations with Baldwin and Sinema in the Senate, attended a ceremony after the House vote with Pelosi and House Majority Leader Chuck Schumer.

“When I think about this bill, I think about how much it matters to people in each of our lives, our family members, our coworkers, our neighbors, our friends,” Collins said.

Thursday's vote came as the LGBTQ community has faced violent attacks, such as the shooting earlier this month at a gay nightclub in Colorado that killed five people and injured at least 17.

“We have been through a lot,” said Kelley Robinson, the incoming president of the advocacy group Human Rights Campaign. But Robinson says the votes show “in such an important way” that the country values LBGTQ people.

“We are part of the full story of what it means to be an American,” said Robinson, who was inside the Senate chamber for last week’s vote with her wife and young son.

“It really speaks to them validating our love.”

The vote was personal for many senators, too. Schumer said after the House vote that his daughter and her wife are expecting their first child next year.

“My grandchild will live in a world that will respect and honor their mothers' marriage,” Schumer said.

Baldwin, the first openly gay senator who has been working on gay rights issues for almost four decades, also attended the House ceremony.

“We are giving these loving couples the certainty that their marriages are legal, and that they will continue to have the same rights and responsibilities and benefits of every other married couple," Baldwin said. “We are telling these Americans that we see them and we respect them.”