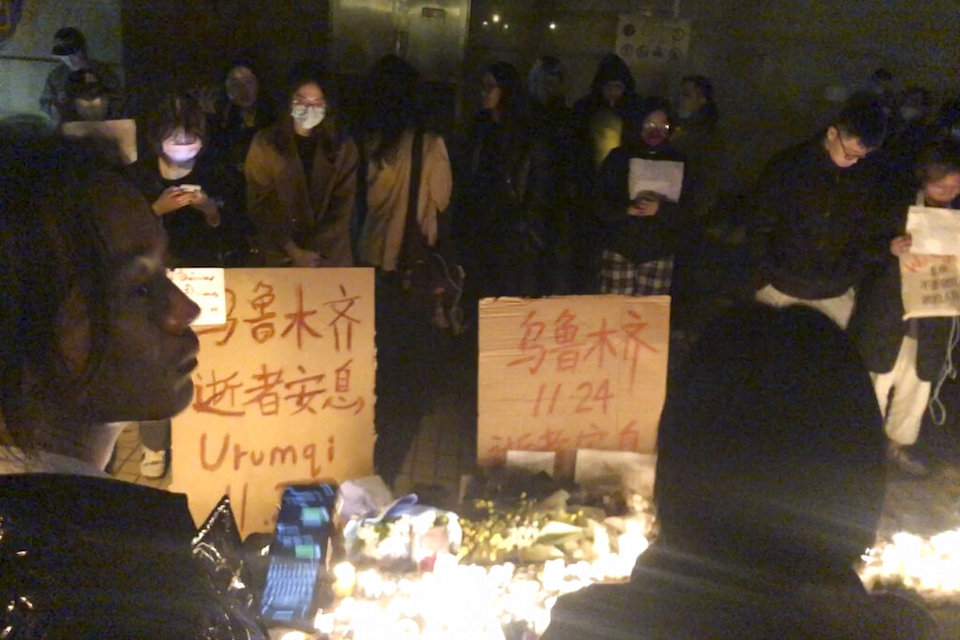 BEIJING (AP) — Protests against China's pervasive anti-virus controls that have confined millions of people to their homes spread to Shanghai and other cities after complaints they might have worsened the death toll in an apartment fire in the northwest.

Shanghai police used pepper spray against about 300 protesters, according to a witness. They gathered Saturday night to mourn the deaths of at least 10 people in an apartment fire last week in Urumqi in the Xinjiang region in the northwest.

Videos posted on social media that said they were filmed in Nanjing in the east, Guangzhou in the south and at least five other cities showed protesters tussling with police in white protective suits or dismantling barricades used to seal off neighborhoods. Witnesses said a protest occurred in Urumqi, but The Associated Press was unable to confirm details of other videos

President Xi Jinping’s government faces mounting anger at its “zero-COVID” policy that has shut down access to areas throughout China in an attempt to isolate every case at a time when other governments are easing controls and trying to live with the virus.

That has kept China’s infection rate lower than the United States and other countries. But the ruling Communist Party faces growing complaints about the economic and human cost as businesses close and families are isolated for weeks with limited access to food and medicine.

Some protesters were shown in videos shouting for Xi to step down or the ruling party to give up power.

Party leaders promised last month to make restrictions less disruptive by easing quarantine and other rules but said they were sticking to “zero-COVID.”

Meanwhile, an upsurge in infections that pushed daily cases above 30,000 for the first time has led local authorities to impose restrictions residents complain exceed what is allowed by the national government.

The fire deaths in Urumqi triggered an outpouring of angry questions online about whether firefighters who needed three hours to extinguish the blaze or victims trying to escape might have been obstructed by locked doors or other controls. Authorities denied that, but the disaster became a focal point for public anger about anti-disease restrictions, ruling party propaganda and censorship.

Calls for Xi Jingping to step down

In Shanghai, protesters gathered at Middle Urumqi Road at midnight with flowers, candles and signs reading “Urumqi, November 24, those who died rest in peace,” according to a participant who would give only his family name, Zhao.

Zhao said one of his friends was beaten by police and two were pepper-sprayed. He said police stomped on his feet as he tried to stop them from taking his friend away. He lost his shoes and left barefoot.

Around 100 police stood in lines to prevent protesters from gathering or leaving, Zhao said. He said buses with more police arrived later.

Another protester, who gave only his family name, Xu, said there was a larger crowd of thousands of demonstrators, but police stood in the road and let them pass on the sidewalk.

Protests spread to cities across country

Internet users posted videos and accounts on Chinese and foreign social media showing protests in Shanghai, Nanjing, Chengdu and Chongqing in the southwest and Urumqi and Korla in Xinjiang.

A video that said it was shot in Urumqi showed protesters chanting, “Remove the Communist Party! Remove Xi Jinping!”

Protests in Xinjiang are especially risky following a security crackdown against Uyghurs and other mostly Muslim ethnic minorities that has included mass detentions.

Most protesters in the videos were members of China's dominant Han ethnic group. A Uyghur woman in Urumqi said Uyghurs were too scared to take to the streets.

“Han Chinese people know they will not be punished if they speak against the lockdown,” said the woman, who asked not to be identified by name for fear of retaliation. “Uyghurs are different. If we dare say such things, we will be taken to prison or to the camps.”

Posts on Chinese social media were quickly deleted, which Beijing often does to suppress criticism it worries might serve as a rallying point for opposition to one-party rule.

Confined at home since August

People in some parts of Xinjiang have been confined to their homes since early August. Some complain they lack access to food and medicine and have posted appeals for help online.

In a possible attempt to placate the public, authorities on Saturday announced they had achieved “societal zero-COVID” and restrictions in Urumqi and Korla would be relaxed. The government said taxi, railway, bus and other public services that had been suspended for weeks would resume. State-owned China Southern Airlines announced it would resume flights from Urumqi to four Chinese cities starting Monday.

Social media users greeted news the disease was under control with disbelief and sarcasm. “Only China can achieve this speed,” wrote one user on the Sina Weibo social media service.

Anger boiled over earlier after Urumqi city officials appeared to blame the deaths from Thursday night's fire on the apartment tower’s residents.

“Some residents’ ability to rescue themselves was too weak,” said Li Wensheng, head of Urumqi’s fire department, at a news conference.

Police announced the arrest of a 24-year-old woman on charges of spreading “untrue information” about the death toll online.

Videos of protests featured people holding the Chinese flag and shouting “Open up, open up." Some shouted and pushed against rows of men in the white protective suits.

Two Urumqi residents who declined to be named for fear of retribution said large-scale protests occurred Friday night. One of them said he had friends who participated.

The AP pinpointed the locations of two of the videos of the protests in different parts of Urumqi. In one video, police in face masks and hospital gowns faced off against shouting protesters. In another, one protester spoke to a crowd about their demands. It was unclear how widespread the protests were.

Support for lockdowns has fallen

Xi has defended the strategy as an example of the superiority of the Chinese system compared with the United States and other Western countries, which politicized the use of face masks and had difficulties enacting widespread lockdowns.

But support for “zero-COVID” has cratered in recent months, as tragedies sparked public anger.

Last week, the government of the central city of Zhengzhou apologized for the death of a 4-month old girl who was in quarantine. Her father said his efforts to take her to a hospital were delayed after ambulance workers balked at helping them because he tested positive for the virus.

The Uyghur woman in Urumqi said she had been unable to leave her apartment since Aug. 8, and was not even allowed to open her window. On Friday, she and her neighbors defied the order, opening their windows and shouting in protest.