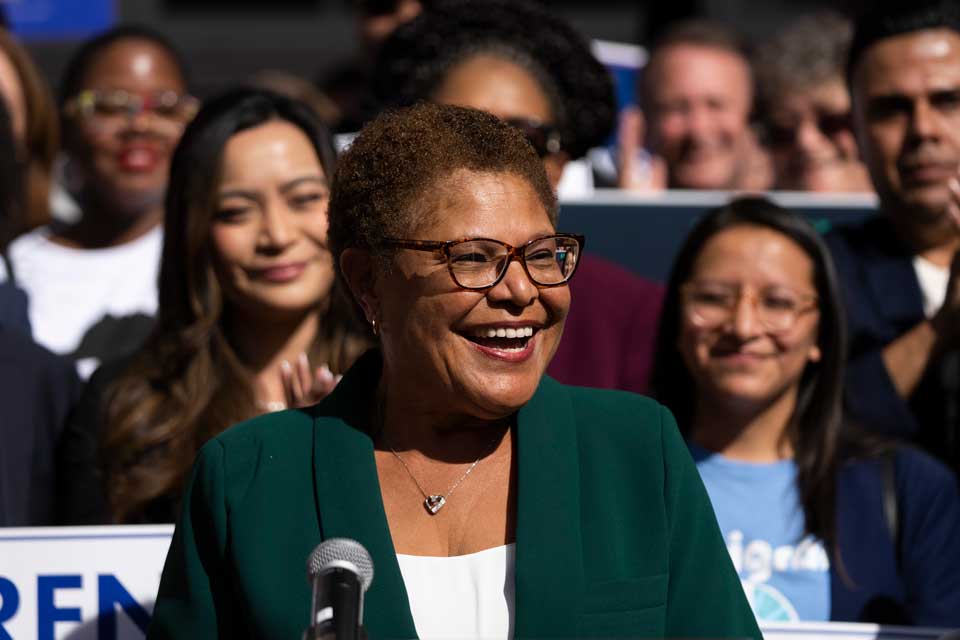 LOS ANGELES (AP) — U.S. Rep. Karen Bass defeated developer Rick Caruso to become the next mayor of Los Angeles on Wednesday, making her the first Black woman to hold the post as City Hall contends with an out-of-control homeless crisis, rising crime rates and multiple scandals that have shaken trust in government.

Bass was working in her congressional office in Los Angeles when she was informed by an aide she had won the race. Caruso’s campaign said he was calling the mayor-elect to offer his congratulations.

“I ran for mayor to urgently confront the crises our hometown faces,” Bass said. “Tonight, 40,000 Angelenos will sleep without a home — and five will not wake up. Crime is increasing and families are being priced out of their neighborhoods. This must change.”

Caruso promised that “there will be more to come from the movement we built.”

“As a city we need to unite around” Bass, he said in a statement.

Bass — a Democrat who was on President-elect Joe Biden’s short list for vice president — overcame more than $100 million in spending by the billionaire Caruso’s campaign while arguing that she would be a coalition builder who could heal a troubled city of nearly 4 million. 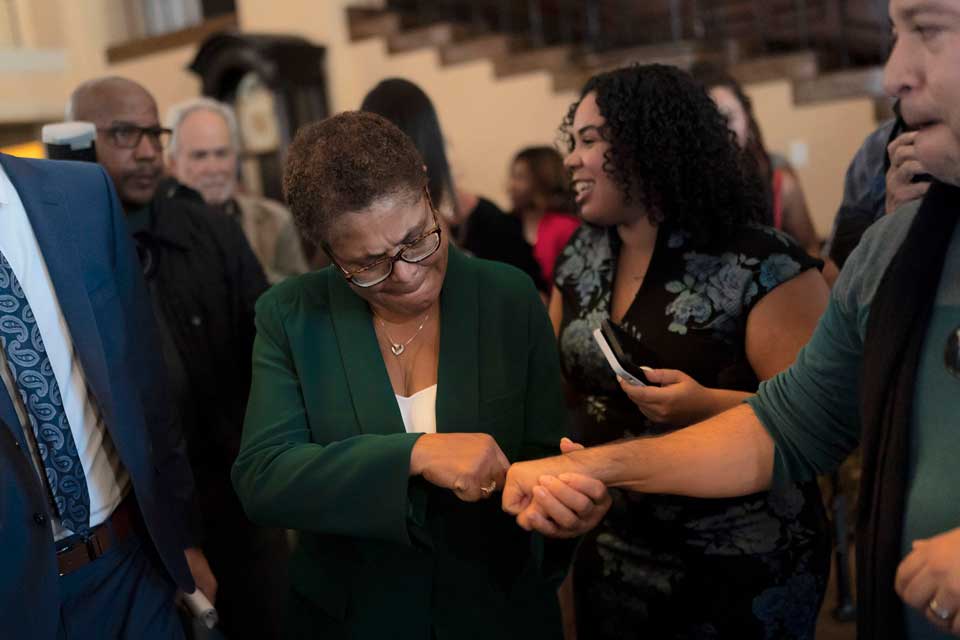 Los Angeles Mayor-elect Karen Bass fist-bumps a supporter after a news conference in Los Angeles, Thursday, Nov. 17, 2022. Bass defeated developer Rick Caruso to become the next mayor of Los Angeles on Wednesday, making her the first Black woman to hold the post as City Hall contends with an out-of-control homeless crisis, rising crime rates and multiple scandals that have shaken trust in government. (AP Photo/Jae C. Hong)The election tested whether voters in the heavily Democratic city were willing to turn away from their liberal tendencies and embrace an approach that would place a strong emphasis on public safety.

Caruso, a former Republican who became a Democrat shortly before entering the race, had represented a turn to the political right. He argued that Bass and other longtime politicians were part of the problem who led LA into multiple crises. He promised to expand the police department to deal with rising crime rates and quickly get ubiquitous homeless encampments off the streets.

Bass, a former state Assembly leader, had the advantage of being a lifelong Democrat in a city where Republicans are almost invisible. She was backed by Biden, Vice President Kamala Harris and the Democratic establishment.

The election had historical dimensions, as she will become the first woman and second Black person to hold the job, after former Mayor Tom Bradley, who held the post from 1973 to 1993.

She takes office next month as City Council faces a racism scandal that led to the resignation of its former president and calls for the resignation of two more members. More than 40,000 people are homeless, and there is widespread anxiety over crime that has ranged from daytime robberies on city sidewalks to smash-and-grab thefts at luxury stores.

Bass has said her first order of business at City Hall will be to declare a state of emergency on homelessness and begin the work of getting thousands of unhoused people out of sagging tent communities and rusted RVs and into shelters.

“We are in a fight for the soul of our city,” Bass said at an election night rally.

“We are going to build a new Los Angeles.”

The winner replaces beleaguered Democrat Eric Garcetti, who will conclude two bumpy terms with his nomination to become U.S. ambassador to India stalled in the Senate — apparently over sexual misconduct allegations against a former top Garcetti adviser.

The race was shaped in large part by Caruso’s lavish spending — and his unavoidable advertising. City records show his campaign expenses have topped $100 million so far, most of it financed with his own money.

Caruso’s focus on unsafe streets had shared some similarity to 1993, when LA voters turned to Republican Richard Riordan to lead the city in the aftermath of the deadly 1992 riots that erupted after four white police officers were acquitted of assault in the beating of Black motorist Rodney King. It also has parallels to New York City in the early 1990s, when the perception that crime was out of control helped usher in Republican Mayor Rudy Giuliani.

Los Angeles, however, is much changed from Riordan’s days. It’s more Latino, less white and more solidly Democratic — Republicans comprise only about 13% of voters, while Democrats account for nearly 60%, with most of the remainder independents who lean Democratic.