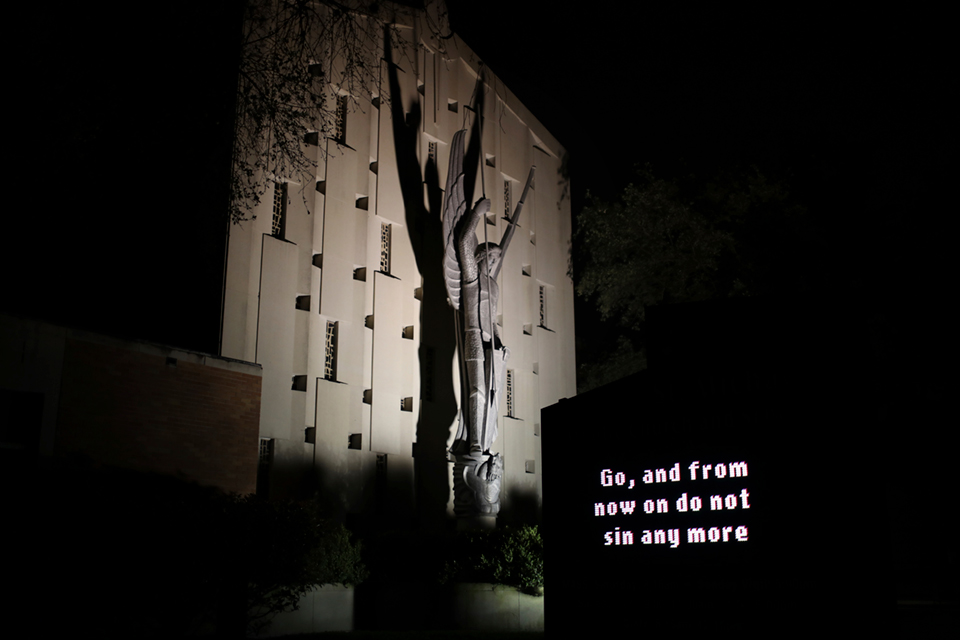 Thirty-three states exempt clergy from laws requiring professionals such as teachers and doctors to report information about alleged child abuse to police or child welfare officials if the church deems the information privileged, an Associated Press review has found.

This loophole has resulted in an unknown number of child sex abuse cases being allowed to continue for years despite the perpetrator having confessed the behavior to religious officials. In many of these cases, the privilege has been invoked to shield religious groups from civil and criminal liability after the abuse became known to civil authorities.

Over the past two decades lawmakers in these states have proposed more than 130 bills seeking to create or amend child sex abuse reporting laws, the AP review found. All either targeted the loophole and failed to close it, or amended the mandatory reporting statute without touching the clergy privilege amid intense opposition from religious groups.

Here is a look at the 33 states and the bills aimed at changing their laws, plus some tips for localizing the story. Find AP's coverage here.

A 2003 Alabama state law included clergy in the list of mandatory reporters, but Alabama’s Rules of Evidence exempts information about alleged child abuse that is obtained by clergy in confidential communications.

In 2012, a bill targeting a different part of Alaska’s mandatory reporting statute expanded who would be a reporter, but did not target the privilege, which in Alaska is for all religious “practitioners.”

Democratic state Sen. Victoria Steele has sought to close the clergy privilege loophole three times since 2020, and has been thwarted in committee each time.

Clergy are mandated reporters in Arkansas, but the clergy-penitent privilege applies to all confessional communications. The reporting laws were updated or amended multiple times in 2009 with the privilege untouched, and there has not been a move to close the loophole in the past decade.

In 2019, then-California state Sen. Jerry Hill proposed a bill (SB-360) that would have required clergy to report reasonable suspicion of child abuse or neglect by other clergy members or coworkers that they learned of during confessions. The bill was placed on hold after opposition from the Catholic Church, the Church of Jesus Christ of Latter-day Saints and other religious groups.

Colorado’s mandatory reporting statute has been amended 31 times since it passed in 1987, but the privilege was never specifically targeted. Colorado has a new task force investigating the clergy loophole that is due to report back in 2024.

A privilege for communications “between priest and penitent in a sacramental confession” was added to Delaware’s Child Abuse Prevention Act of 1997. The bill passed unanimously. However, a judge suggested in a 2016 ruling that the clergy privilege would be unconstitutional if read narrowly to apply only to the religions that call clerics “priests” and recognize a sacrament called “confession.”

The state’s Protection of Vulnerable Persons Act requires all adults to report cases of child harm, but allows churches to exempt clergy-penitent communications from the mandatory reporting statute.

Georgia’s exemption for child abuse reports received during confessions was signed into law in 2012 as part of an unrelated criminal reform bill. The child abuse section significantly expanded mandated reporters of suspected abuse, adding clergy to the list for the first time but leaving in the privilege loophole.

Three bills have amended Idaho’s mandatory reporting rules over the past decade, yet none of them sought to eliminate the clergy-penitent privilege.

A 2019 domestic violence bill included language that would have deleted the clergy privilege in Illinois. After Catholics raised concerns, the lawmaker said she’d remove it. The bill never made it out of first stages.

An effort to remove Kentucky’s penitent privilege was attempted in 2003 when three lawmakers, all Democrats, proposed a bill amid a Catholic Church abuse scandal. The Archdiocese of Louisville was facing dozens of clergy abuse lawsuits, later settled in a class action lawsuit for about $25 million. The bill (HB58) never made it out of the Judiciary committee.

Clergy are mandated reporters, but the privilege loophole exists in Louisiana for confessional conversations. In 2016, the Louisiana Supreme Court ruled that a priest has no duty to report confidential information heard during a sacramental confession.

Bills created clergy as mandated reporters but with the privilege intact, and expanded in 2003 the number of church workers and volunteers who fell under the mandatory reporting category.

A 2003 Maryland bill would have closed the clergy reporting loophole, but a successful campaign to defeat the proposal was led by a Catholic cardinal who would later be defrocked for sexually abusing children and seminarians. A 2004 version would have required clergy to report while acting outside their clerical role. Both bills died in committee.

In 2002, Massachusetts passed a mandatory reporting bill addressing clergy, but left in the privilege loophole. An AP review of bills since has found no effort to reverse the privilege.

Michigan passed a law in 2002 that added clergy as a mandated reporter, but included the loophole for confessions.

New mandatory reporting law enacted by Minnesota’s Legislature in 2020 did not include any suggestion of removing the clergy-penitent privilege.

Both bills addressing the clergy-penitent privilege in Missouri were referred to committee and never received hearings. The sponsor told the AP she considered it a lost cause because of behind-the-scenes pushback from Catholic members.

A bill seeking to do away with Montana’s clergy-penitent privilege reporting exemption was put forward in 2021, but never got a hearing and died.

In 2005, clergy, practitioners of Christian Science, religious leaders and attorneys were removed as persons required to make reports of abuse, neglect, exploitation and isolation of people age 60 and older. A 2013 bill that failed would have added clergy back as required reporters of suspected instances of abuse.

In 2003, New Mexico lawmakers added clergy to the list of reporters amid the Catholic Church’s scandals. The clergy privilege loophole was left in the law, and that piece was never debated. Since then, there have been several bills introduced aimed at clarifying the reporting law. Only one would have eliminated the clergy-penitent privilege. It died in committee.

A bill seeking to remove the clergy-penitent privilege in North Dakota in 2021 was withdrawn under heavy pressure from Catholic dioceses.

In recent years the Ohio Legislature has extended the statute of limitations for reporting abuse in response to the latest priest abuse scandals, but there have been no legislative efforts to remove the clergy-penitent privilege itself.

Oregon’s statutes say public or private officials who are mandated to report include members of the clergy, except when such communication is privileged. There have been no relevant bills over the past decade that have challenged the privilege in Oregon.

At least 40 bills were filed over 20 years in Pennsylvania with the mandatory reporting statute code. There were lots of chances to amend the law to remove the clergy privilege, but it never happened. In 2014, Pennsylvania updated its child abuse code and left in the privilege.

In the wake of the church scandals, a bill was introduced in 2003 that added clergy as mandated reporters unless the information is protected by the priest-penitent privilege. After that, various bills have amended child protection laws but left the privilege in.

A bill seeking to close the clergy-penitent privilege written by Democratic Rep. Angela Romero in 2020 never made it out of committee after strong opposition from Catholic and Mormon churches. Romero is co-authoring a new clergy privilege bill in 2022.

Clergy were added to Vermont’s mandatory reporting law in 2003, but with the privilege loophole.

A bill in 2019 added priests to Virginia’s list of mandatory reporters. The bill’s sponsor said that not targeting the privilege was intentional so that the legislation would make it through without the church killing it.

Two bills sought to remove the clergy-penitent privilege from state law in Wisconsin in 2019 and 2022 made little progress amid strong public opposition from the Catholic Church.

Wyoming law cites “any person” as a mandated reporter of abuse, which can include clergy. However, there is a clergy privilege in Wyoming that exempts clergy from having to report. A failed bill in 2013 that sought to increase penalties for failing to report did not address the privilege. 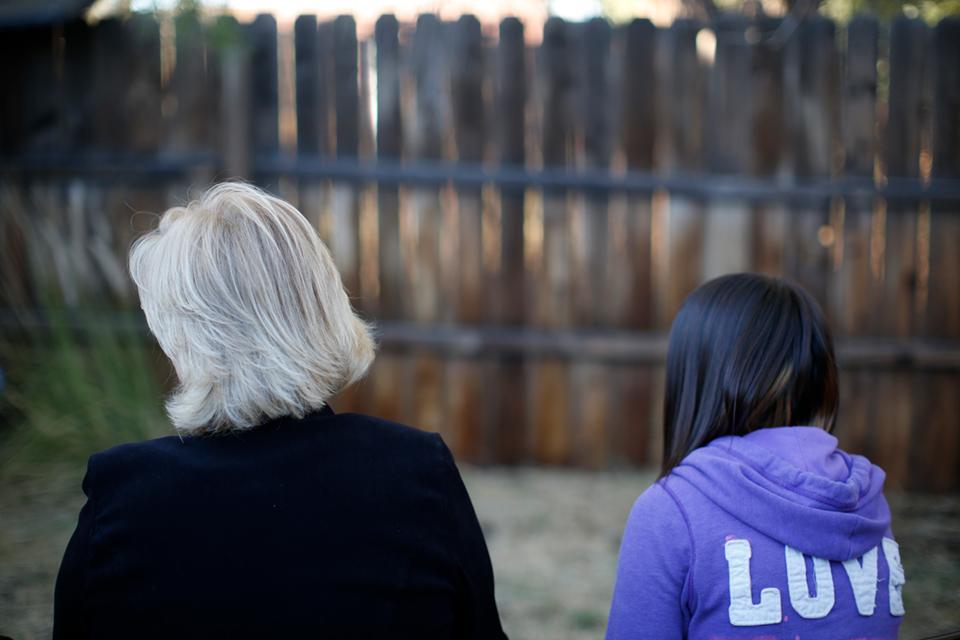 FILE- MJ and her adoptive mother sit for an interview in Sierra Vista, Ariz., Oct. 27, 2021. State authorities placed MJ in foster care after learning that her father, the late Paul Adams, sexually assaulted her and posted video of the assaults on the Internet. (AP Photo/Dario Lopez-Mills, File)

— In these 33 states, clergy are exempt from reporting child sex abuse if they learn about the alleged activity in a confessional conversation. This loophole to mandatory reporting laws has been cited by church lawyers to release the Catholic Church, and others, from liability in cases where the abuse was allowed to continue even after a clergy member had learned of it. Do victims advocacy groups like SNAP, the Survivors Network of those Abused by Priests, know of any cases in your area?

— The AP found that the Roman Catholic Church has used its well-funded lobbying infrastructure and deep influence to protect the privilege, and that the Mormon Church and Jehovah’s Witnesses have also worked in statehouses and courts to preserve it in states where their membership is high. Which groups or individuals are influencing the laws in your state?