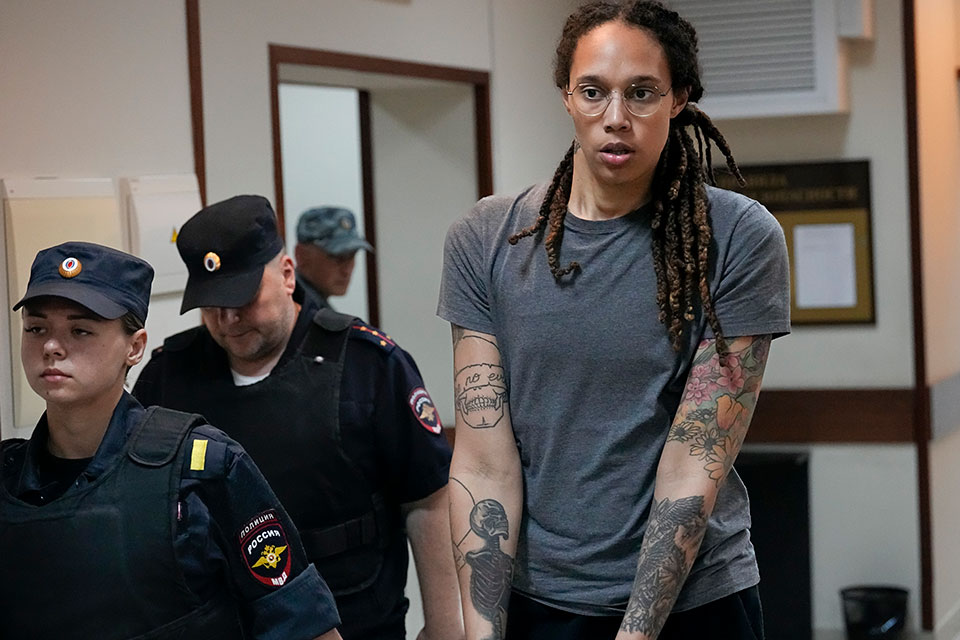 KHIMKI, Russia (AP) — U.S. basketball star Brittney Griner was convicted Thursday in Russia of drug possession and smuggling and was sentenced to nine years behind bars in a politically charged case that could lead to a high-stakes prisoner exchange between Washington and Moscow.

The 31-year-old Griner, a two-time U.S. Olympic champion and a eight-time all-star with the WNBA’s Phoenix Mercury, listened with a blank expression as an interpreter translated the verdict by Judge Anna Sotnikova, but her lawyers said later she was “very upset.” Griner also was fined 1 million rubles (about $16,700). 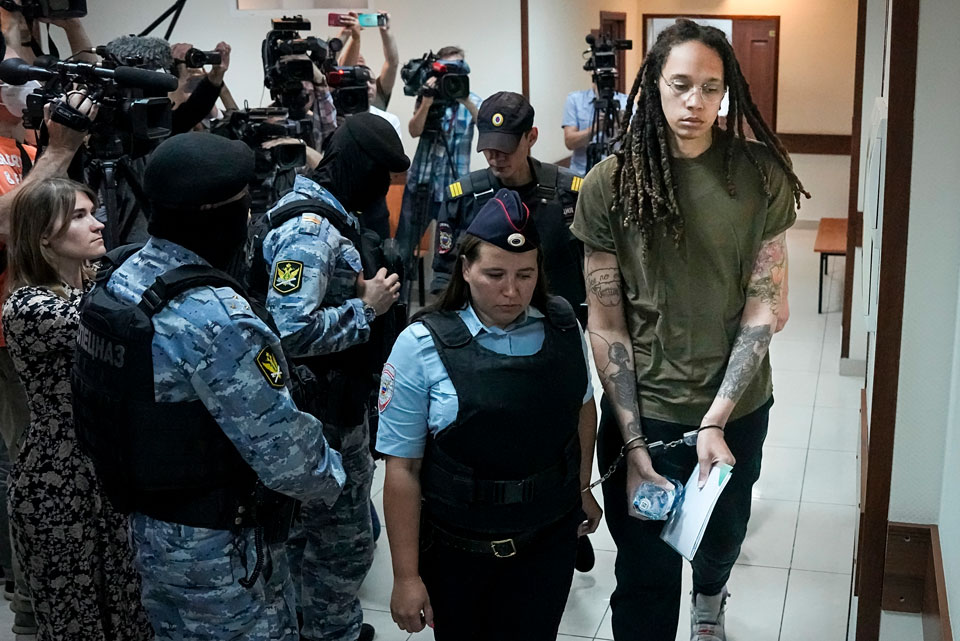 WNBA star and two-time Olympic gold medalist Brittney Griner is escorted in a court room prior to a hearing, in Khimki just outside Moscow, Russia, Tuesday, Aug. 2, 2022. Closing arguments in Brittney Griner's cannabis possession case in Russia are set for Thursday. That's nearly six months after the American basketball star was arrested at a Moscow airport in a case that has reached the highest levels of U.S.-Russia diplomacy. (AP Photo/Alexander Zemlianichenko, File)U.S. President Joe Biden denounced as “unacceptable” the verdict and sentence, which came amid soaring tensions between the U.S. and Russia over Ukraine.

“I call on Russia to release her immediately so she can be with her wife, loved ones, friends, and teammates,” Biden said, adding that he would continue to work to bring home Griner and Paul Whelan, an American imprisoned in Russia on an espionage conviction.

Outside court, the U.S. Embassy's charge d’affaires Elizabeth Rood called the outcome “a miscarriage of justice.”

Griner, recognized as one of the greatest players in WNBA history, has been detained since Feb. 17 after police said they found vape cartridges containing cannabis oil in her luggage upon landing at Moscow’s Sheremetyevo Airport. She was returning to Russia, where she has competed since 2014.

As she was led out of court, Griner said: “I love my family.” 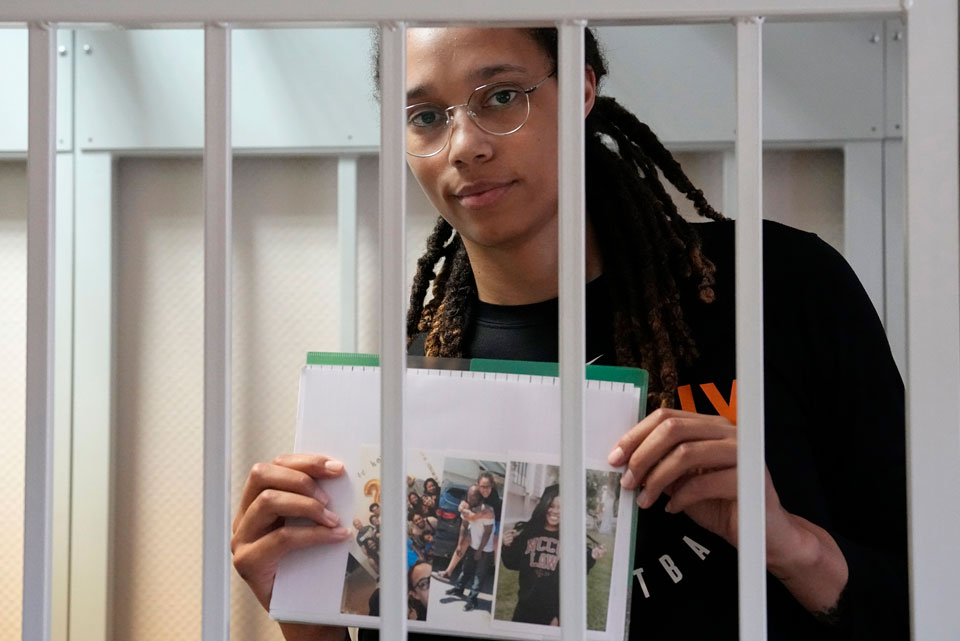 WNBA star and two-time Olympic gold medalist Brittney Griner holds images standing in a cage at a court room prior to a hearing, in Khimki just outside Moscow, Russia, Wednesday, July 27, 2022. (AP Photo/Alexander Zemlianichenko, Pool, File)The nine-year sentence was close to the maximum of 10 years that Griner had faced under the charges. Most Russians possessing small quantities of drugs get at most five years in prison, lawyers said.

Before the unusually swift verdict was reached, an emotional Griner apologized to her family, teammates and the Russian city of Yekaterinburg, where she plays in the WNBA offseason, “for my mistake that I made and the embarrassment that I brought on them.”

With her voice cracking, she added:

“I hope in your ruling it does not end my life.”

Under Russian law, Griner has 10 days to appeal, and her lawyers say they expect a hearing in Moscow regional court next week. Asked if Griner could ask for pardon from President Vladimir Putin, Blagovolina said they would consider every possibility, but the lawyers said they were not part of any discussions about a prisoner swap.

Griner’s agent Lindsay Kagawa Colas tweeted that the sentence “was severe by Russian legal standards and goes to prove what we have known all along, that Brittney is being used as a political pawn." She added that she supported Biden's efforts “to get a deal done.”

A conviction is usually a prerequisite to arranging a prisoner exchange and also allows Griner to apply for a presidential pardon. Deputy Foreign Minister Sergei Ryabkov said last month that the “necessary judicial procedures” must be completed before other steps can be taken.

The disclosure in July that the U.S. government was seeking a prisoner swap involving Griner reflected the growing pressure on the Biden administration to do more to bring her home. The U.S. State Department had earlier declared Griner to be “wrongfully detained” — a charge that Russia has sharply rejected.

When she took the stand July 7, Griner said: “I would like to plead guilty on the charges against me. But I had no intention of breaking any Russian law.” She added that she brought the vape canisters into Russia because she had packed in haste for her flight.

Griner also described a confusing scene while being held at the airport, saying an interpreter provided by authorities translated only a fraction of what was being said to her and that officials told her to sign documents without explaining what they were. She also said she was not informed of her rights.

Her lawyers introduced evidence that Griner was using the medicinal cannabis for chronic pain and injuries sustained during her career and included a letter from her doctor. Griner testified she was aware cannabis oil was outlawed in Russia and had not intended to break the law or “plan to smuggle anything into Russia.”

Griner’s case and her nearly six months behind bars have raised strong criticism among her supporters in the United States, including her wife, Cherelle, that Biden was not doing enough to win her freedom.

Griner sent a personal appeal to Biden, and more than 1,100 Black female leaders urged the administration to “make a deal to get Brittney back home swiftly and safely and to meet with Brittney’s wife Cherelle immediately.” Biden later called Cherelle Griner “to reassure her that he is working to secure Brittney’s release as soon as possible,” the White House said July 6.

Cherelle Griner, who also spoke with Vice President Kamala Harris, later said she was “grateful to the both of them for the time they spent with me and for the commitment they expressed to getting BG home,” using her wife’s initials.

On July 27, U.S. Secretary of State Antony Blinken said Washington has offered a deal to Russia aimed at bringing home Griner and Whelan in a sharp reversal of previous policy. Details of the proposal were not announced, though a person familiar with the matter said the U.S. has offered to trade convicted Russian arms dealer Viktor Bout for Whelan and Griner. The person insisted on anonymity to discuss an ongoing investigation.

Russian media have speculated repeatedly that Griner could be swapped for Bout, nicknamed “the Merchant of Death,” who is serving a 25-year sentence in the U.S. after being convicted of conspiracy to kill U.S. citizens and providing aid to a terrorist organization. Russia has agitated for Bout’s release for years.

The severity of Griner's sentence could give Russia leverage in a swap by increasing pressure on Washington to negotiate her release.

“I think that the harsher the sentence, the more pressure there will be on the Biden administration to make a deal, and obviously they like leveraging that pressure,” Tom Firestone, a lawyer who formerly served as the resident legal adviser at the U.S. Embassy in Moscow, said of the Russians before the sentence was imposed.

Her detention was made public only after Russian troops moved into Ukraine, as relations between Russia and the United States hit new lows after Washington led the West in bringing sanctions against Moscow.

Griner’s plight has been highlighted by her supporters at home, including top athletes, especially after little news emerged from her initial weeks of detention in Russia, where she had limited access to officials from the U.S. Embassy. It was only in May that the State Department designated her as wrongfully detained, moving her case under the supervision of its Special Presidential Envoy for Hostage Affairs, effectively the government’s chief hostage negotiator.

NBA Finals MVP Stephan Curry wore Griner’s jersey under his track suit at the awards show and urged “the entire global sports community to continue to stay energized on her behalf. She’s one of us, the team of athletes in this room tonight and all over the world. A team that has nothing to do with politics or global conflict.”

Griner, a 6-foot-9 center, has 12 of the 15 regular season dunks in WNBA history and set the single-year record for blocks with 129 in 2014. She led the league in scoring twice. She was a two-time Associated Press college basketball player of the year and led Baylor to a 40-0 season and the 2012 NCAA title. She was the No. 1 pick by Phoenix in the 2013 draft.

The commissioners of the WNBA and NBA called the trial's outcome “unjustified and unfortunate, but not unexpected and Brittney Griner remains wrongly detained. ... It is our hope that we are near the end of this process of finally bringing BG home to the United States.”