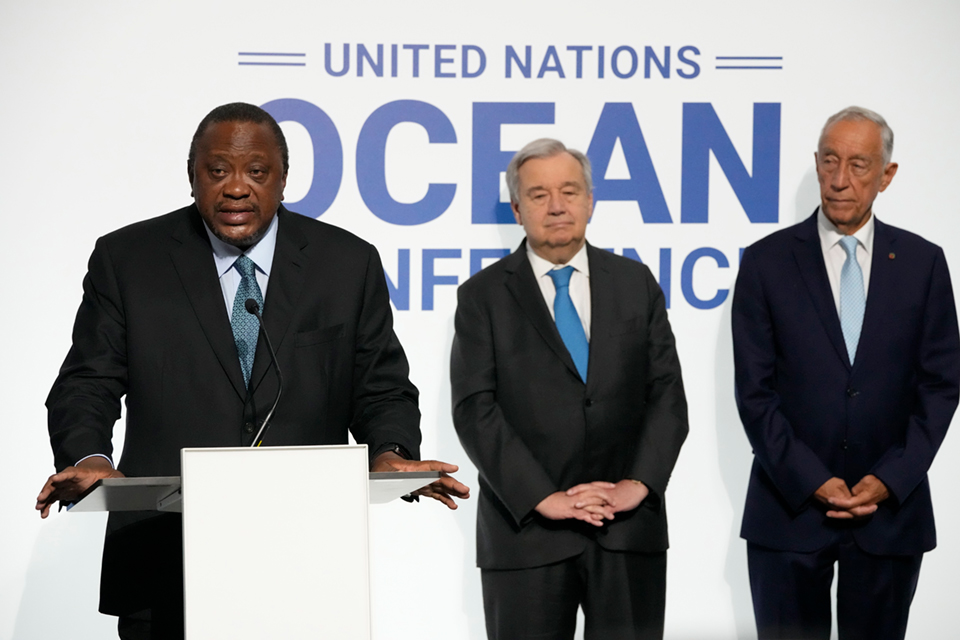 LISBON, Portugal (AP) — The Biden administration is stepping up efforts to combat illegal fishing by China, ordering federal agencies to better coordinate among themselves as well as with foreign partners in a bid to promote sustainable exploitation of the world's oceans.

On Monday, the White House released its first ever National Security memo on illegal, unreported and unregulated fishing, or IUU, to coincide with the start of a United Nations Ocean Conference in Lisbon, Portugal.

Nearly 11% of total U.S. seafood imports in 2019 worth $2.4 billion came from illegal, unreported and unregulated fishing, according to the U.S. International Trade Commission, a federal agency.

While China isn't named in the lengthy policy framework, language in it left little doubt where it was aimed. The memo is bound to irritate Beijing at a time of growing geopolitical competition between the two countries. China is a dominant seafood processor and through state loans and fuel subsidies has built the world's largest distant water fishing fleet, with thousands of floating fish factories spread across Asia, Africa and the Americas.

It will also be followed in coming days by new rules from the National Oceanic and Atmospheric Administration expanding the definition of illegal fishing to include related labor abuses, a first step to the eventual blacklisting of flag states that fail to comply.

Conservation groups praised the effort, which builds on work started under the Obama administration to clean up U.S. seafood supply chains.

“American fishermen have to follow a lot of rules and regulations by the U.S. government,” said Beth Lowell, vice president for Oceana, a Washington-based non-profit. “By taking actions against other countries like China that have a poor labor and environmental record, it levels the playing field and that benefits legal fishermen all over the world.”

The action plan also calls for expansion of the U.S. seafood import monitoring program, which requires importers to provide documentation from the point of catch to insure that illegally caught fish don't slip into the U.S. Currently, the program only covers about a dozen species. Groups like Oceana have been pushing for the program to cover all imports.

"Until the United States holds all seafood imports to the same standards as U.S.-caught fish, illegally sourced seafood will continue to be sold alongside legal catch," Lowell said.

The action plan also doesn't provide any additional resources to enforce laws already on the books.

“Fighting IUU fishing is resource intensive,” said Evan Bloom, a former State Department official who negotiated several international fishing agreements and who now is a senior fellow at the Wilson Center in Washington. “Whether the U.S. really does more may depend on whether NOAA directs more funds to enforcement efforts, intel gathering and inspections.”

In Lisbon, where officials and scientists from more than 120 countries were attending the five-day conference, U.N. Secretary-General Antonio Guterres criticized some countries — which he did not identify — for looking out for their own economic interests instead of the needs of the entire planet.

“International waters are ours,” Guterres insisted, referring to all the planet’s inhabitants.

The U.N. is hoping the conference will bring fresh momentum to the protracted efforts for a global ocean agreement that covers conservation efforts on the high seas. Oceans cover some 70% of the earth’s surface and provide food and livelihoods for billions of people. Some activists refer to them as the largest unregulated area on the planet.

What's known as the Treaty of the High Seas is being negotiated within the framework of the United Convention on the Law of the Sea, the main international agreement governing maritime activities.

After 10 years of talks on the treaty, however, as recently as three months ago, a deal is still not within sight. A fifth round is scheduled for August in New York.

“The world’s largest ecosystem... is still unprotected and is dying as we watch,”

Guterres said “significant progress” has been made toward a deal on a high seas treaty and that the world stands at “a crucial moment” for the future of the oceans.

“We need to make people put pressure on those who decide,” Guterres said, appealing for people to raise their voices and be heard.

The conference is also expected to reaffirm and build upon the some 62 commitments made by governments at the previous summit in Nairobi, Kenya in 2018, from protecting small island states with ocean-based economies to sustainable fishing and combatting warming waters.

On the sidelines of the event, Jeff Bezos, the founder of Amazon, announced $50 million in new grants to help meet a goal of protecting 30% of the planet's land and sea by 2030. Currently, less than 8% of the ocean is zoned as marine protected areas.

More than half of the money being donated by the Bezos Earth Fun will support organizations working in Colombia, Costa Rica, Ecuador, and Panama in strengthening the Eastern Tropical Marine Corridor. The four countries banded together at last year's U.N. Climate Change conference to announce the creation of a Spain-sized marine protected area containing such environmental hotspots as the Galapagos Islands,

U.S. climate envoy John Kerry and French President Emmanuel Macron are among those attending the event.