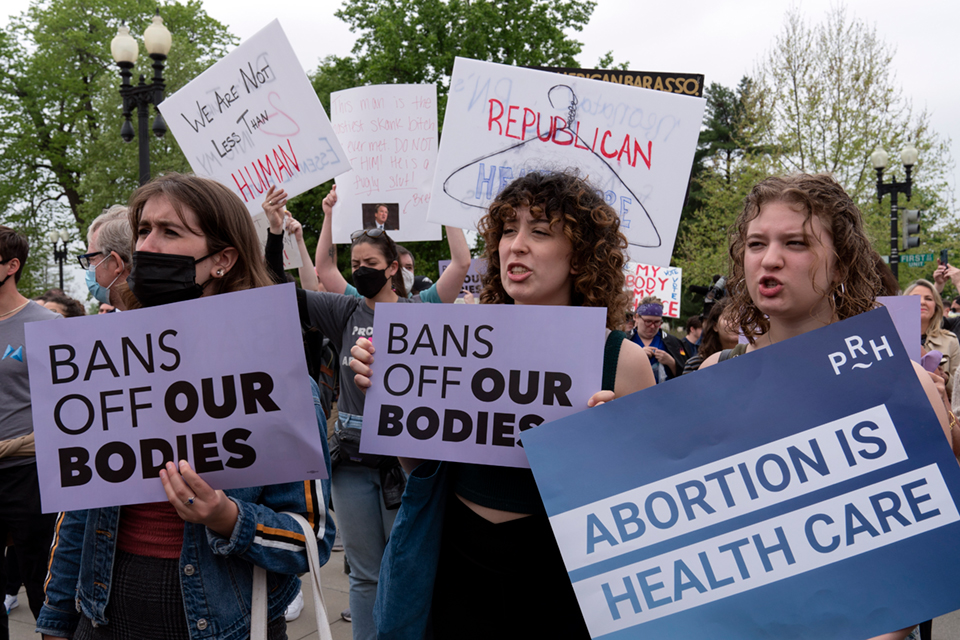 The owner of an Alabama clinic was flying home from a conference for abortion providers Monday night when a leaked Supreme Court draft opinion began ricocheting around the world.

As Dalton Johnson read it, he was struck by the bluntness of the language that would end the constitutional right to an abortion, shuttering clinics in about half of American states, including his. 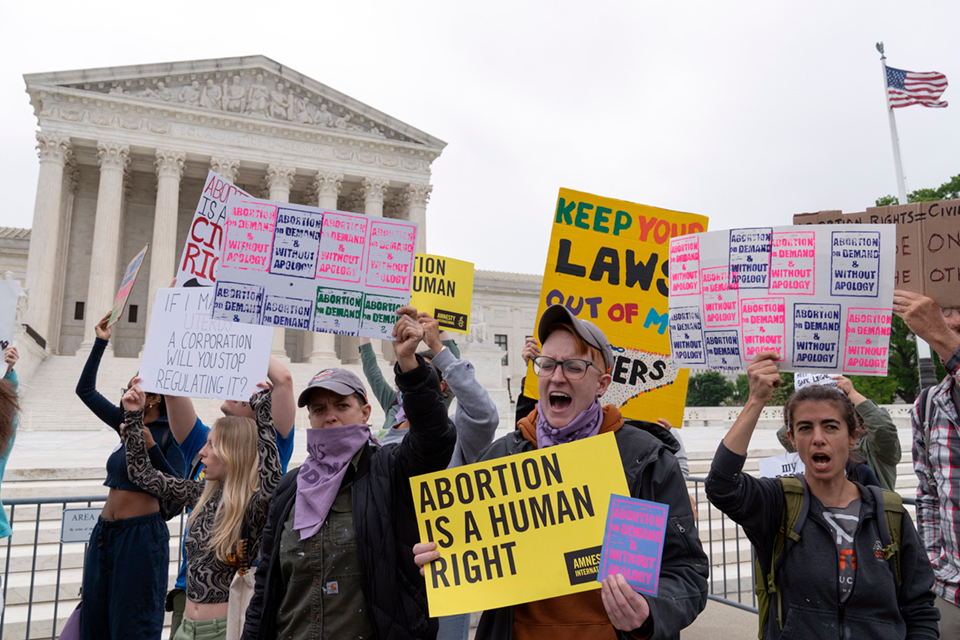 Demonstrators protest outside of the U.S. Supreme Court Tuesday, May 3, 2022 in Washington. A draft opinion suggests the U.S. Supreme Court could be poised to overturn the landmark 1973 Roe v. Wade case that legalized abortion nationwide, according to a Politico report released Monday. Whatever the outcome, the Politico report represents an extremely rare breach of the court's secretive deliberation process, and on a case of surpassing importance. (AP Photo/Jose Luis Magana)

People on both sides of the abortion divide have been expecting the Supreme Court this summer to reverse the landmark 1973 Roe v. Wade case that legalized abortion nationwide. But many said the draft opinion was nevertheless stunning, forcing them to reckon with the reality the nation is likely to enter soon.

“I can’t stop crying,” said an elated Mississippi state Rep. Becky Currie, who sponsored the 2018 law that is the basis for the Supreme Court case. “I am not quite sure I have the words to express how I feel right now, but God has had his hands on that bill since the beginning.”

What the draft revealed

The leaked draft, published late Monday by Politico, is a 98-page opinion in Dobbs v. Jackson Women’s Health Organization, which challenged the constitutionality of the Mississippi bill that banned abortion after 15 weeks. If the decision stands as written, it would also overturn Planned Parenthood v. Casey, a 1992 decision that protected abortion services even though it allowed states to add some limitations.

“Roe was egregiously wrong from the start,” the draft opinion states. It was signed by Justice Samuel Alito, a member of the court’s 6-3 conservative majority. According to Politico, four other justices — Clarence Thomas, Neil Gorsuch, Brett Kavanaugh and Amy Coney Barrett — have agreed with the opinion.

The draft opinion was written in February and the language could change before the court issues its final ruling. As written, it would give states the power to decide the legality of abortion. Roughly half, largely in the South and Midwest, are likely to quickly ban abortion.

Abortion clinics in those states opened Tuesday morning, still seeing patients but uncertain about the future.

The daily rituals unfolded as they always do: protesters screamed at people walking inside, clinic escorts tried to shield them and hustle them in the doors.

“Please overturn Roe v. Wade," said Barbara Beavers, who stood outside the clinic in Jackson, Mississippi, on Tuesday, trying to persuade people against going inside. “Have mercy on our unborn children. We’re destroying our future, killing our babies."

Jean Folsom stopped by the clinic on her way to work, to thank the volunteers who help pregnant people pass protesters like Beavers. 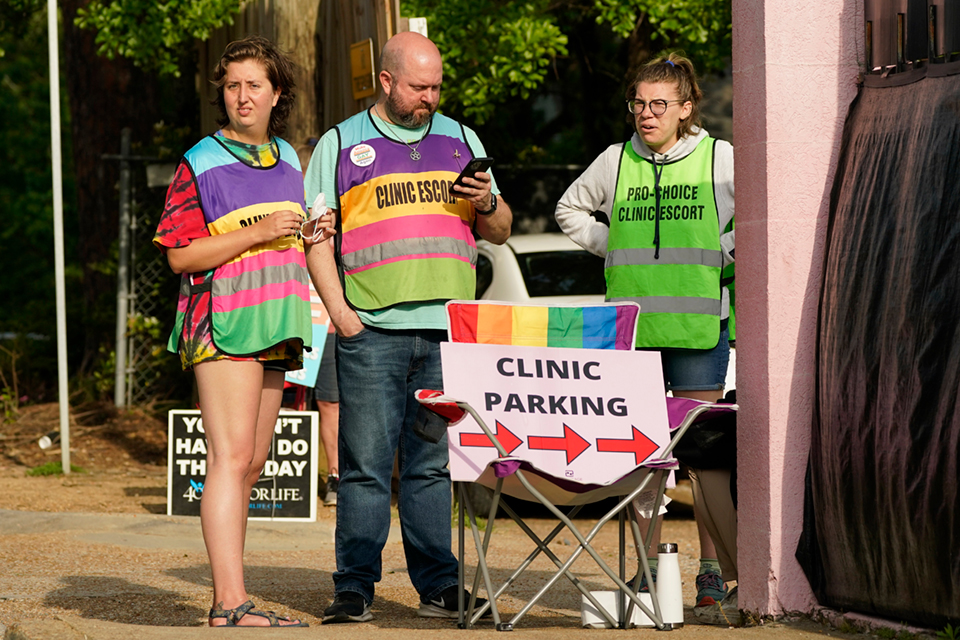 “I really appreciate their efforts, and obviously based on the news last night, I’m worried that this is one of the last times I’ll see them,” said Folsom. She and her family eat breakfast every Saturday at a coffee shop near the clinic, and always felt grateful for the volunteers willing to help people in a state where opposition to abortion is strong.

Folsom said she felt devastated when she read the news Monday night.

“I kind of can’t believe that I live in a country where things seem to be moving backwards,”

Inside clinics, the news prompted frantic phone calls. People were confused about whether abortion remains legal, and for how long.

“I immediately felt sick to my stomach,” said Tammi Kromenaker, who owns a clinic in Fargo, North Dakota. “And 20 million thoughts started going through my head about what can we do? What does my staff need to hear? What do our patients need to hear?”

She posted a notice on the website of the clinics: “If you have an appointment at Red River Women’s Clinic, your appointment is safe."

Katie Quinonez rushed off a plane Tuesday morning and drove straight to the clinic she runs in Charleston, West Virginia. She’d also been attending the National Abortion Federation Conference when the news broke Monday night and she barely slept, she said. She was having nightmares about the Supreme Court.

She was terrified that her patients would misunderstand the news and think that abortion was immediately outlawed. “Abortion is still legal,” the clinic posted on social media, “but that could change as soon as next month.”

She had been bracing for this news.

“But there was still this visceral reaction, this very devastating feeling,” Quinonez said.

At Johnson’s clinic in Huntsville, the phone was ringing more than usual. Women called to ask whether they can still get an abortion. Johnson said his first call of the morning was from a woman who had an abortion scheduled for Friday and wanted to come in Tuesday.

The staff held a meeting, and Johnson says he asked them to focus on the women who are still coming for abortions who need their help. The opinion was just a draft, he told them, and cautioned that it wasn’t the final decision.

Some anti-abortion activists were skeptical that the draft would become reality, fixating instead on the fact that it was leaked the press and whether that implied political posturing.

“I’m hopeful,” said Dennis Westover, a 72-year-old retired electrical engineer, a regular protester outside the clinic in Charleston, West Virginia. But he was suspicious that someone leaked it as ammunition in the country’s intractable culture wars.

“When our Supreme Court stuff starts to be leaked, it’s egregious,” he said. “One side or the other did it for a political motive to stir up some kind of stink.”

In Louisville, Kentucky, protester Angela Minter said she prayed the draft opinion will be the final one.

Minter thinks that’s God answering her prayers: she’s been coming to the clinic most mornings since 2004. Patients tried to dodge her and the other protesters screaming outside. “Don’t murder your baby,” one man shouted at a young woman. Clinic escorts in orange vests helped her into the building. 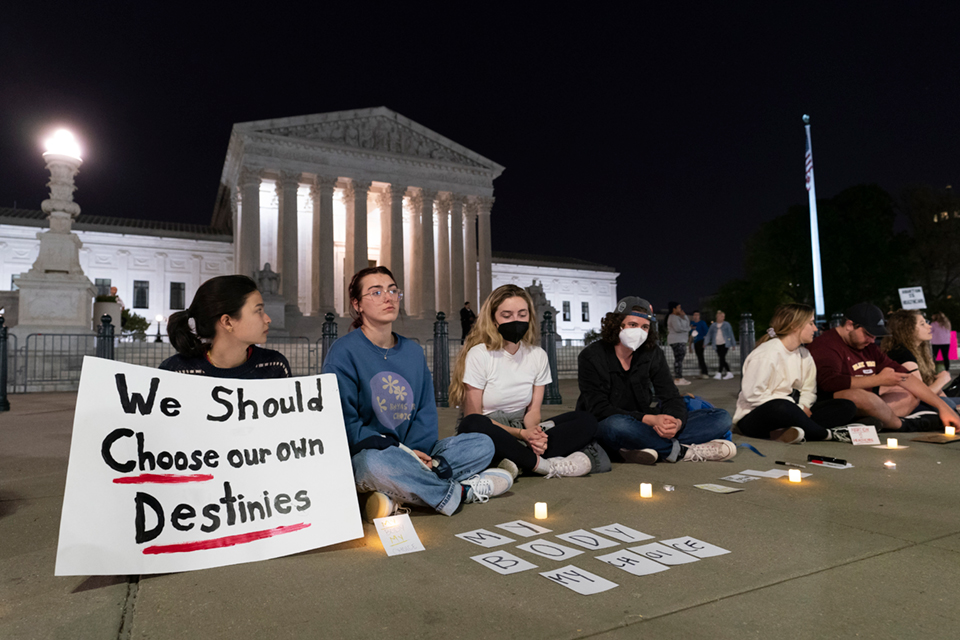 A crowd of people gather outside the Supreme Court early Tuesday, May 3, 2022, in Washington. A draft opinion suggests the U.S. Supreme Court could be poised to overturn the landmark 1973 Roe v. Wade case that legalized abortion nationwide, according to a Politico report released Monday. Whatever the outcome, the Politico report represents an extremely rare breach of the court's secretive deliberation process, and on a case of surpassing importance. (AP Photo/Alex Brandon)

The Louisville clinic was closed for a week last month after the legislature banned abortion, until a court intervened. But if Roe falls, it will likely be shuttered again.

“I do anticipate a day with no abortion clinics in Kentucky," said Meg Stern, who runs the Kentucky Health Justice Network and escorts at the clinic. Abortion access will now be an issue of privilege: people with the means to travel will be able to end their pregnancies.

“It’s the family that only has one vehicle and is already struggling to make ends meet. Maybe they’re in the city, maybe they’re in the rural parts of the state. But if they don’t have access to travel, lodging, gas money, food money, babysitters while they’re gone, time off work," she said. “Do you have the car that will make it?”

For months now, the nation has had a glimpse of what that looks like. Texas banned abortion after six weeks in September. Planned Parenthood clinics in the surrounding states saw a 2,500% increase in patients, said Dr. Iman Alsaden, medical director for Planned Parenthood Great Plains.

Some groups are working to try to circumvent the law the best they can: mobile abortion units, fundraising for travel assistance, mail-order medications. One online women’s health provider reported a significant spike in requests for emergency contraception Tuesday. Democrat-leaning states like New York, California and Illinois are rushing to pass laws to protect abortion access, both for their residents and people coming from out of state.

If abortion is outlawed in North Dakota, Kromenaker is planning to open a clinic just across the river in Minnesota. She hopes the leaked draft shakes people enough to take action, right away.

She texted her husband Tuesday: “We’ve got to move forward very quickly now,” she wrote. “The urgency is there.”