In Surprise Visit to Ukraine Pelosi Meets with President Zelensky 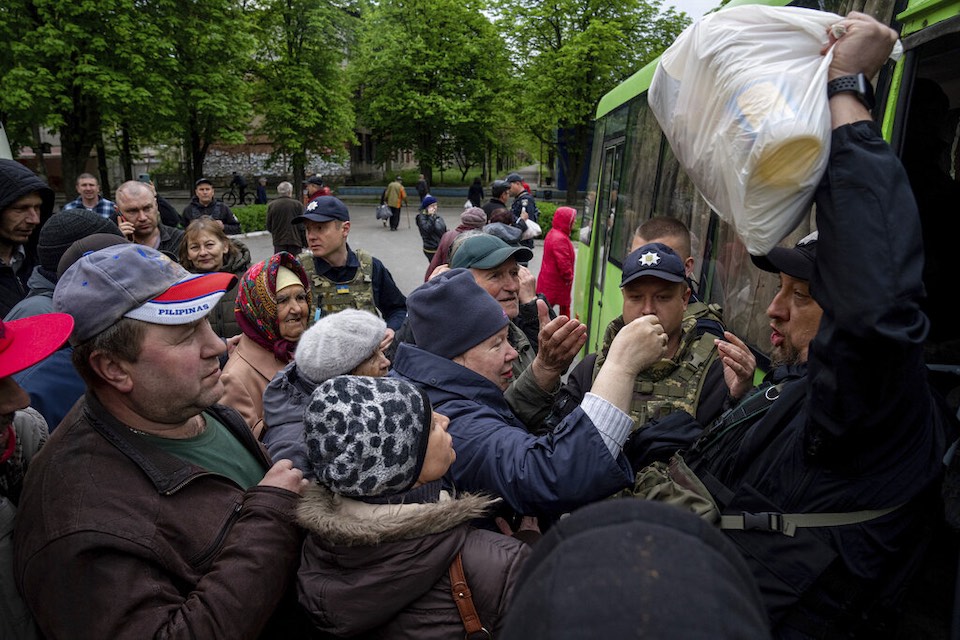 WARSAW, Poland (AP) — A top-level U.S. congressional delegation led by House Speaker Nancy Pelosi praised the “ferocity” and resolve of Ukrainians face to face with their leader in a weekend visit to Kyiv undertaken in extraordinary secrecy.

Pelosi, second in line to the presidency after the vice president, was the most senior American lawmaker to visit Ukraine since Russia’s war began more than two months ago. Only days earlier, Russia bombed the Ukrainian capital while the U.N. secretary-general was there.

Pelosi and the half dozen U.S. lawmakers with her met Ukrainian President Volodymyr Zelenskyy and his top aides for three hours late Saturday to voice American solidarity with the besieged nation and get a first-hand assessment of the effort as she works to steer a massive new Ukraine aid package through Congress.

“Our commitment is to be there for you until the fight is done,” Pelosi is seen telling Zelenskyy in a video of the meeting released by his office. "We are on a frontier of freedom and your fight is a fight for everyone. Thank you for your fight for freedom.”

“You all are welcome,” Zelenskyy told the delegation.

Pelosi told reporters in Poland on Sunday the delegation was proud to convey to Zelenskyy "the message of unity from the Congress of the United States, a message of appreciation from the American people for his leadership and admiration for the people of Ukraine for their courage.” She is set to meet Polish President Andrzej Duda, a NATO ally, on Monday in Warsaw. 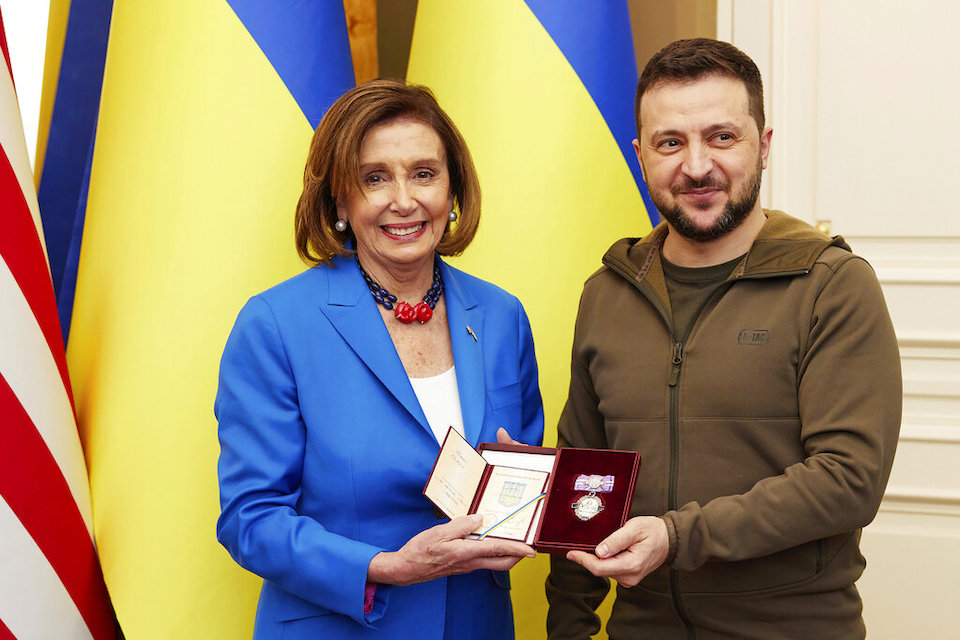 Ukrainian President Volodymyr Zelenskyy, right, awards the Order of Princess Olga, the third grade, to U.S. Speaker of the House Nancy Pelosi in Kyiv, Ukraine, Saturday, April 30, 2022. Pelosi, second in line to the presidency after the vice president, is the highest-ranking American leader to visit Ukraine since the start of the war, and her visit marks a major show of continuing support for the country's struggle against Russia. (Ukrainian Presidential Press Office via AP)

The delegation's trip to Kyiv was not disclosed until the party was safely out of Ukraine. Nor were details given on how they got to the capital and back. A week earlier, Secretary of State Anthony Blinken and Defense Secretary Lloyd Austin Zelenskyy traveled to Kyiv overland from Poland for talks with Zelenskyy.

The members of the congressional delegation were unanimous in praising Ukraine’s defenses, in painting the battle of one as good against evil and in assuring continued long-term U.S. military, humanitarian and economic support.

“This is a struggle of freedom against tyranny,” said Rep. Adam Schiff, chairman of the House Intelligence committee.

Aid is signal to Putin

The trip came two days after U.S. President Joe Biden asked Congress for $33 billion to bolster Ukraine’s fight against Russia, more than twice the size of the initial $13.6 billion aid measure that now is almost drained. The measure is designed to signal to Russian President Vladimir Putin that U.S. weaponry and other forms of assistance aren’t going away.

Rep. Jason Crow of Colorado, a veteran and a member of the House intelligence and armed services committees, said he went to Ukraine with three areas of focus: “Weapons, weapons and weapons.”

“We have to make sure the Ukrainians have what they need to win," he said. "What we have seen in the last two months is their ferocity, their intense pride, their ability to fight and their ability to win if they have the support to do so.”

Scores of U.S. lawmakers are trekking to the region to witness first hand the war’s toll and shore up U.S. troops in the broader region. Pelosi’s delegation was notable for the seniority of its members.

Bipartisan resolve to back Ukraine

The trip also underscored Pelosi's stature as an ambassador on the global stage. The speaker is well known in Europe and elsewhere abroad, typically leads travel delegations and keeps close relations with allies overseas.

Though all in the delegation were Democrats, the U.S. Congress has displayed a rare and, so far, lasting bipartisan resolve to back Ukraine as it battles Russia. Pelosi has branded the war a conflict between democracy and autocracy and vowed Washington will stand with Ukraine until it defeats the invaders.

“This is a time we stand up for democracy or we allow autocracy to rule the day,” Meeks said. Crow said the U.S. "is in this to win, and we will stand with Ukraine until victory is won."

Schiff, as intelligence panel chair, said he was particularly focused on making sure Ukraine is getting the U.S. intelligence support it needs to “defeat Russian forces.”

The delegation’s visit followed those of several EU officials and European heads of state who have gone to show solidarity with Zelenskyy, starting with the March 15 surprise visit by the leaders of NATO members Czech Republic, Poland and Slovenia.

More recently, U.N. Secretary-General António Guterres met Zelenskyy in Kyiv on Thursday. A missile strike rained down on the capital barely an hour after their joint press conference, an attack Kyiv’s mayor said was Putin giving his “middle finger” to Guterres.

The delegation was visiting southeast Poland and going later to the capital. Poland has received more than 3 million refugees from Ukraine since Russia launched its war on Feb. 24.

“We look forward to thanking our Polish allies for their dedication and humanitarian efforts,” Pelosi said.

McGovern said Russia’s war had repercussions far beyond Ukraine and was exacerbating a food crisis that would be disastrous for poor people across the globe.

He added: “I don’t think that Putin cares if he starves the world."