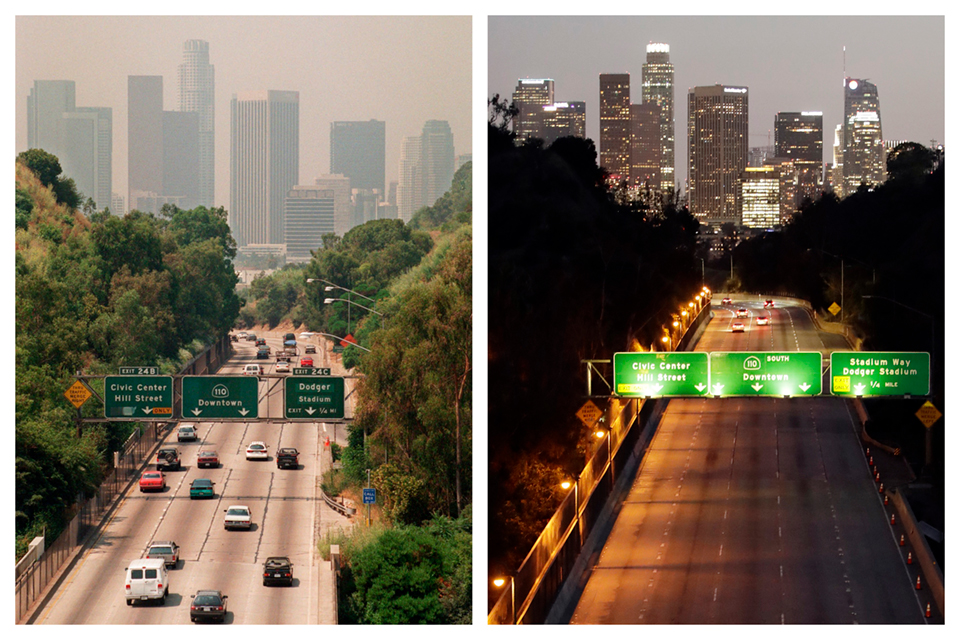 With climate change, plastic pollution and a potential sixth mass extinction, humanity has made some incredible messes in the world.

But when people, political factions and nations have pulled together, they have also cleaned up some of those human-caused environmental problems, including healing the ozone hole, clearing perpetually smoggy air and saving many species from the brink of extinction.

“We can be good at cleaning up our messes, it’s whether or not we choose to be and what we prioritize,” said Michigan State University environmental sustainability researcher Sheril Kirshenbaum.

For Earth Day, The Associated Press asked more than 25 environmental scientists and policy experts, including two former U.S. Environmental Protection Agency chiefs and the current director of the United Nations Environment Programme, to share their top stories about environmental problems that the world fixed.

“There are some amazing success stories,” said Stanford University environmental scientist Rob Jackson. “It’s easy for us to get tunnel vision with everything going wrong, and there is a lot that needs to change quickly. But it’s wonderful to remind ourselves that other people in the past have succeeded and that society has succeeded too, both nationally here in the U.S. and also internationally.”

Here are the four successes mentioned most often and a key aspect that so many ecological wins have in common.

Fixing ozone depletion was by far the top choice of scientists, officials and environmental policy experts.

“It was a moment where countries that usually compete with each other grasped the collective threat and decided to implement a solution,” former EPA chief Carol Browner said in an email.

Scientists in the 1970s had discovered that a certain class of chemicals, often used in aerosol sprays and refrigeration, was eating away the protective ozone layer in Earth’s atmosphere that shields the planet from harmful ultraviolet radiation linked to skin cancer.

The ozone layer was thinning everywhere, creating a hole over Antarctica, which not only threatened increased skin cancer cases, but cataracts and widespread changes to ecosystems around the globe, said University of North Carolina atmospheric scientist Jason West.

“It’s the first time we created a planet-killing problem and then we turned around and solved it,” Stanford’s Jackson said. 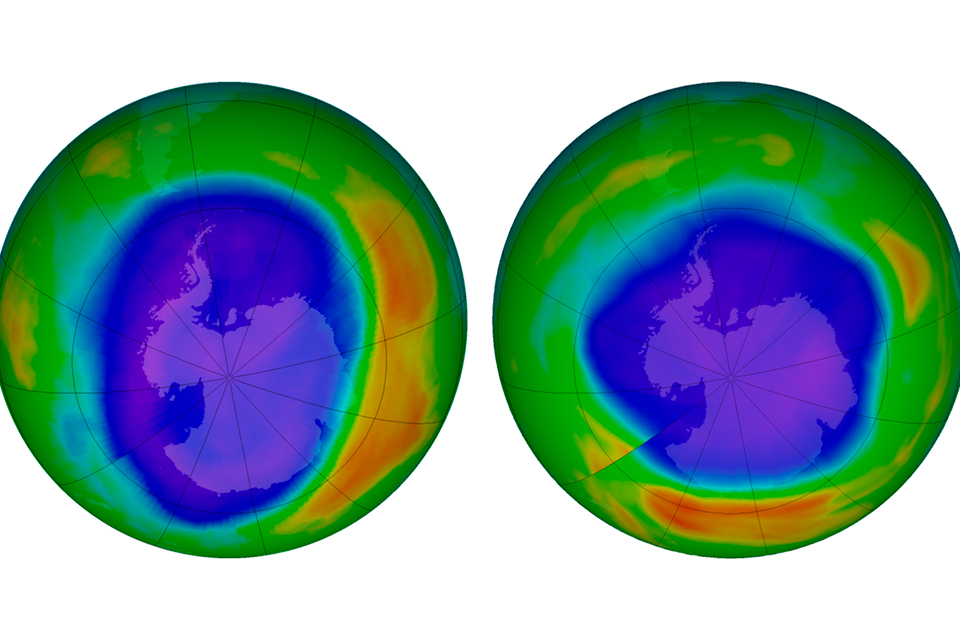 FILE - This combination of images made available by NASA shows areas of low ozone above Antarctica on September 2000, left, and September 2018. The purple and blue colors are where there is the least ozone, and the yellows and reds are where there is more ozone. With climate change, plastic pollution and a potential sixth mass extinction, humanity has made some incredible messes in the world. But when people, political factions and nations have pulled together, they have also cleaned up some of those human-caused environmental problems. (NASA via AP)

In 1987, the countries of the world signed the Montreal Protocol, a first of its kind treaty that banned the ozone-munching chemicals. At this point every nation in the world has adopted the treaty, 99% of the ozone-depleting chemicals have been phased out, “saving 2 million people every year from skin cancer,” United Nations Environment Programme Director Inger Andersen said in an email.

The ozone hole over Antarctica worsened for a couple decades, but over the last several years it has slowly started to heal in fits and spurts. The United Nations Environment Programme projects that the ozone “ will heal completely by the 2030s.”

While activists point to the Montreal Protocol as a hope and example for the fight against climate change, it’s not quite the same. In the case of the banned ozone-sapping chemicals the corporations that manufactured them also made their replacements. But with climate change “it’s more of an existential threat to the oil and gas companies,” Jackson said.

In the United States and much of the industrialized world, the air is much cleaner and clearer than it was 50 or 60 years ago when major cities like Los Angeles were choked with smog and even more dangerous microscopic particles in the air. And lakes and rivers were dumping grounds, especially around Ohio, Michigan and Canada.

“We would go to Lake Erie when I was young... and play on the beach and there would be dead fish everywhere. We would have dead fish fights,” Stanford’s Jackson said.

In the United States the Clean Air Act of 1970 and its follow up in 1990 with EPA regulations “effectively cleaned our air,” UNC’s West said. A similar law passed in the 1972 for water.

“This has led to fewer health conditions such as cancer and asthma, for example, and saved millions of lives and trillions of dollars in health care costs,” Syracuse University environmental sciences professor Sam Tuttle said. “That means healthier people, more productive fisheries and a healthier and more attractive environment for all of us to enjoy.” 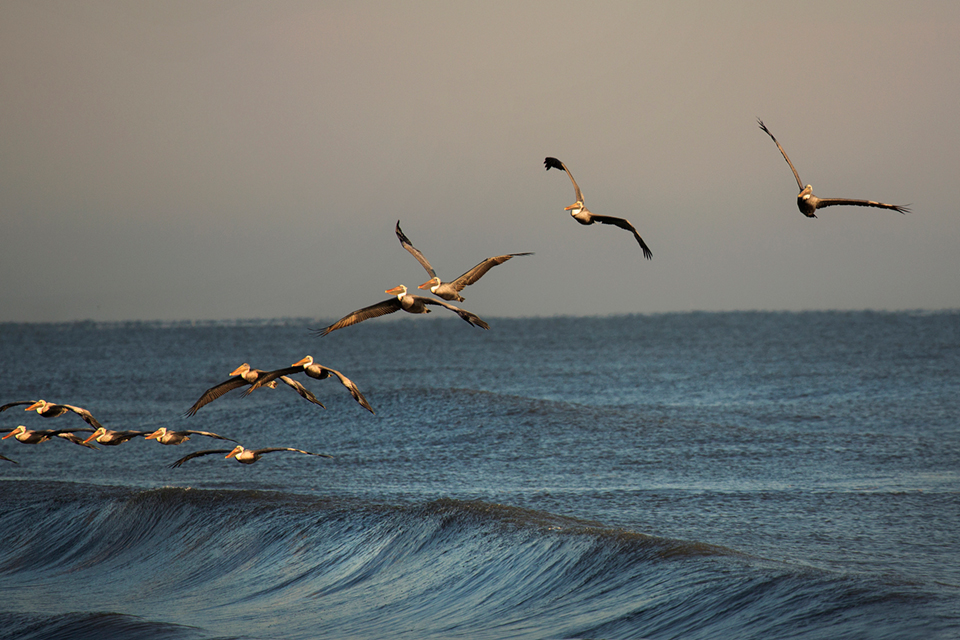 FILE - A squadron of brown pelicans glides over the ocean waves off Sandbridge beach in Virginia Beach, Va., in 2019. With climate change, plastic pollution and a potential sixth mass extinction, humanity has made some incredible messes in the world. But when people, political factions and nations have pulled together, they have also cleaned up some of those human-caused environmental problems. (L. Todd Spencer/The Virginian-Pilot via AP, File)

On the water, Brown University environmental scientist J. Timmons Roberts also grew up on Lake Erie and stopped going to the water because of the dead fish: “Regulations and cooperation between the U.S. and Canada really made the difference and now there’s genuine eco-tourism there and thousands of walleye and other fishers come out every summer.”

The steep fall in price of solar and wind power, which do not produce heat-trapping gases, has surprised experts and given them hope that the world can wean itself from coal, oil and natural gas that are causing global warming.

Solar “is becoming a dominant energy technology and it’s becoming cheaper,” Jackson said. “It is cheaper than almost all other forms of electricity generation.”

Few people thought solar and wind prices would drop so quickly just ten years ago, Jackson, Kirshenbaum and others said.

Experts credit renewable power subsidies to pull the world out of the 2008 Great Recession, especially in Germany and the United States. 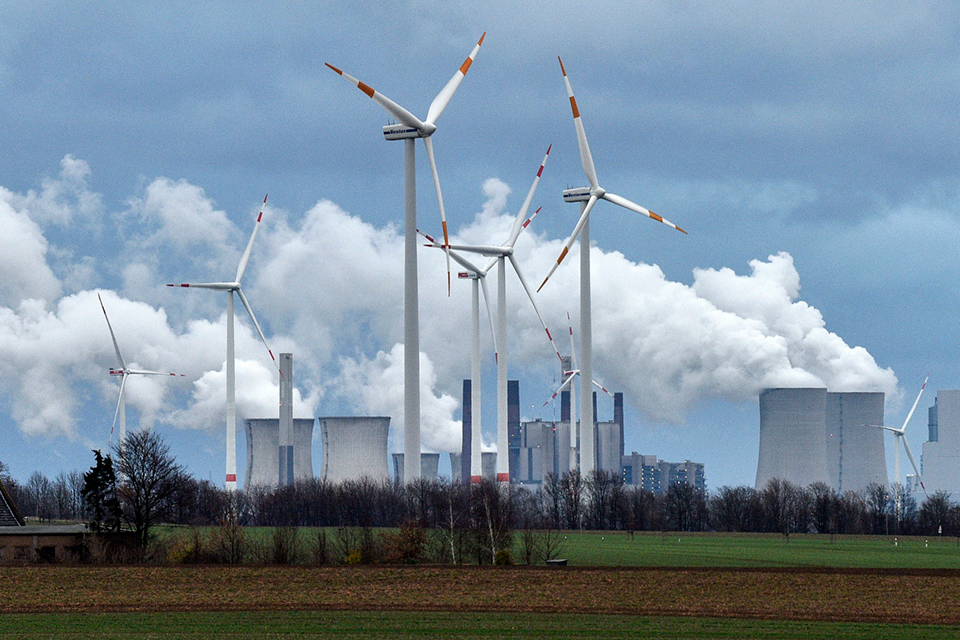 FILE - Wind turbines are seen in front of a coal fired power plant near Jackerath, Germany on Friday, Dec. 7, 2018. With climate change, plastic pollution and a potential sixth mass extinction, humanity has made some incredible messes in the world. But when people, political factions and nations have pulled together, they have also cleaned up some of those human-caused environmental problems. (AP Photo/Martin Meissner, File)

All were once on the brink of extinction, put on the endangered species list for protection. Now they are all of the protected list and in some cases they are so abundant that people consider them a nuisance or they cause problems for other species.

“Conservation efforts are clawing some endangered species back from the brink,” Duke University ecologist Stuart Pimm said. “We are learning to do this thing called conservation.”

The U.S. Fish and Wildlife Service has taken 96 species off the endangered species list, 65 of them because they have recovered.

Experts credit regulations and laws across the world with restricting the killing and trading of endangered species and preventing destruction of crucial habitat for those critters and plants.

Another key change was the ban on the pesticide DDT, which reverberated through the food chain, causing thinning eggs for eagles, peregrine falcons and other birds of prey, Cornell University environmental biology professor Robert Howarth said.

In the United States, many of these key successes were spurred by laws and actions taken by Republican administrations of Richard Nixon, Ronald Reagan and George H.W. Bush.

“All these major milestones, including the creation of the EPA, were bipartisan, but unfortunately today we can’t seem to get that stuff done,” said Christie Todd Whitman, who was an EPA chief during a Republican presidency. “Sadly, Republicans don’t seem to care about these issues anymore — everything is so hyper partisan now that (the) GOP seem to be Neanderthals on the environment.”

Often when a Republican is president, the rest of the country moves left and becomes more friendly to environmental action, whereas they move right and become more environmentally complacent during Democratic administrations, said Kirshenbaum, a former congressional staffer and director of Science Debate. What's important is cooperation and buy-in to big issues from all sides, experts said.

The treaty to heal the ozone hole is the example for what working together can accomplish, Syracuse's Tuttle said: “This agreement proved that the international community could come together to create an enforceable framework to tackle an environmental problem of global significance.”