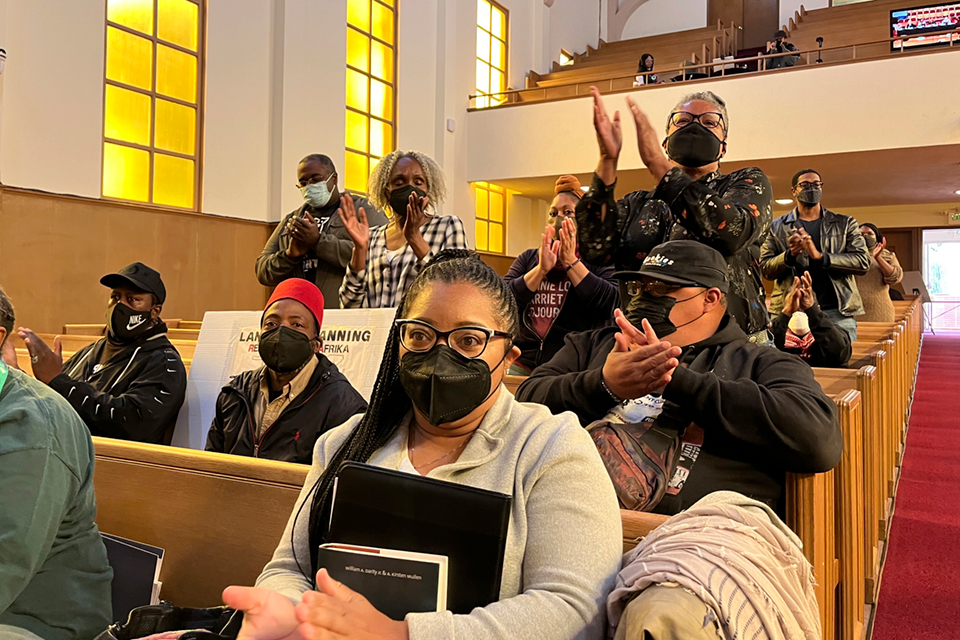 SAN FRANCISCO (AP) — Members of California's first-in-the-nation reparations task force convened in a historic African American church in San Francisco on Wednesday, making their own history as they work to educate the public and develop a restitution proposal for the people harmed by the institution of slavery.

The two-day meeting at the Third Baptist Church in the city's Fillmore district was the first time the nine-member task force gathered in person since its inaugural meeting nearly a year ago. The meeting comes mere weeks after the group voted to limit restitution to descendants of enslaved Black people.

Morning attendance was light, but the emotions largely jubilant. About a dozen speakers lined up for public comment, some thanking the task force members for undertaking its critical work.

"Everybody in here is a part of history,"

Chris Lodgson of the Coalition for a Just and Equitable California, a reparations advocacy group, said before the meeting. “I couldn't be more excited and blessed, really, to be here.”

Gov. Gavin Newsom signed legislation creating the two-year reparations task force in 2020, making California the only state to move ahead with a mission to study the institution of slavery, educate people about its findings and develop remedies. Reparations at the federal level have not gone anywhere, but cities and universities across the country are taking up the issue.

Wednesday's meeting was held in a neighborhood once thriving with African American night clubs and shops until government redevelopment forced out residents — a prime example of how local policies decimated a Black neighborhood.

Third Baptist Church was founded in 1852, the first African American Baptist congregation founded west of the Rocky Mountains, according to a city landmark designation awarded the church in 2017. Its pastor is the Rev. Amos Brown, task force vice chair, longtime civil rights activist and president of the San Francisco chapter of the NAACP. 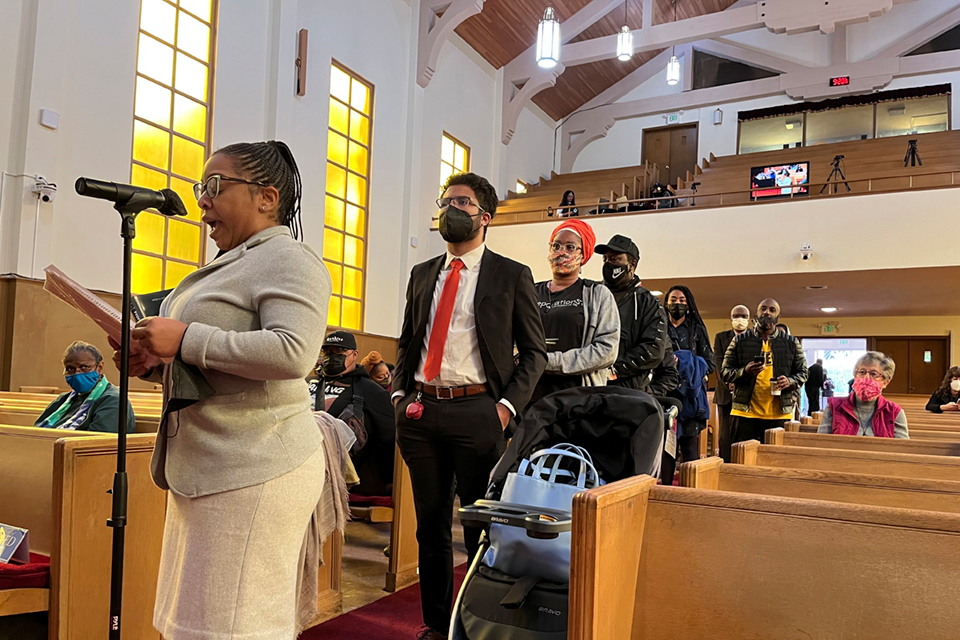 People line up to speak during a reparations task force meeting at Third Baptist Church in San Francisco, Wednesday, April 13, 2022. California's first-in-the-nation reparations task force met for the first time since its inaugural meeting nearly a year ago. The live meeting also comes mere weeks after the group voted to limit restitution to descendants of enslaved or free Black people in the U.S. before the 20th century. (AP Photo/Janie Har)

More than three dozen people were in the wooden pews for the all-day meeting, which included testimony from experts in disparities in education. On Thursday, the committee is scheduled to discuss a report to be made public in June that shows how the institution of slavery continues to reverberate throughout California, including in the form of disparities in household income, health, employment and incarceration.

In a dramatic vote last month, California’s task force split 5-4 to limit reparations to people who can show they are descended from enslaved or free Black people in the U.S. as of the 19th century. Those who favor broader eligibility says lineage-based reparations unfairly shuts out Black people who have also suffered systemic discrimination.

But Josiah Williams, a member of the Coalition for a Just and Equitable California in Oakland, said the vote validated African Americans who have striven throughout history to make society more equitable for everyone else, only to watch as some minority groups received compensation but not them.

“This isn’t about excluding anyone. It’s about making sure we get what we need for our own people."

Several members in the audience were with his coalition, which worked on the legislation to get the task force created. But others were learning about the state's reparations efforts for the first time — as well as the possibility of having to collect paperwork to prove their eligibility for restitution.

Oakland native Terrill Johnson, 41, showed up Wednesday after a friend told him about the meeting.

"I didn't even know this was an actual topic that was going on," he said.

Attorney Cheryce Cryer, who had traveled from Los Angeles to attend the meeting in person, turned around in her pew to advise Johnson to start researching his lineage to enslaved ancestors.

“Don't assume,” Cryer advised him. “Get your documentation together now.”

Committee member Cheryl Grills, a clinical psychologist and professor at Loyola Marymount University, said before the meeting that the task of turning reparations into reality is daunting given that advocates will have to craft a plan that will be approved by lawmakers and funded by the government.

But she acknowledged the excitement.

"We’ve never seemed to get this close to actually being acknowledged, being seen, being understood, being empathized with,” she said. “This country has never done that.”

Since its inaugural meeting in June, the nine-member panel has dedicated much of its time to hearing from experts in weighty areas such as housing and homelessness, racism in banking and discrimination in technology.

Task force members were appointed by the governor and the leaders of the two legislative chambers. A plan for reparations is due to the Legislature in 2023.