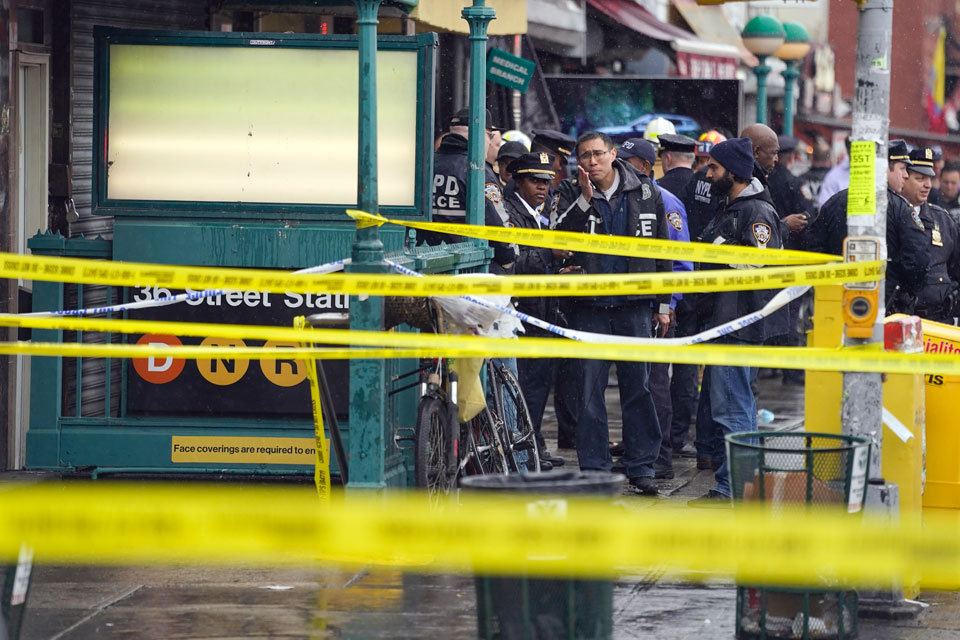 Officials said the gunfire wounded at least five people, and at least 11 in all were injured in some way in the attack at the 36th Street station in the borough's Sunset Park neighborhood.

A train rider's video shows smoke and people pouring out of a subway car. Wails erupt as passengers run for an exit as a few others limp off the train. One falls to the platform, and a person hollers, “Someone call 911!” In other video and photos from the scene, people tend to bloodied passengers lying on the platform, some amid what appear to be small puddles of blood, and another person is on the floor of a subway car.

“My subway door opened into calamity. It was smoke and blood and people screaming,” eyewitness Sam Carcamo told radio station 1010 WINS, saying he saw a gigantic billow of smoke pouring out of the N train once the door opened. 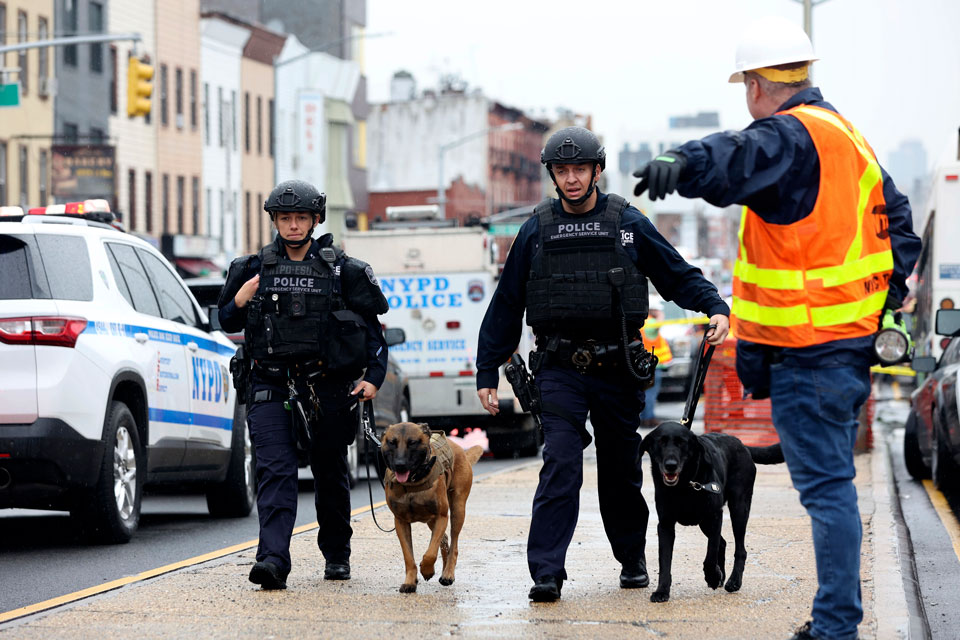 Officers with bomb-sniffing dogs look over the area after a shooting on a subway train Tuesday, April. 12, 2022, in the Brooklyn borough of New York. Multiple people were shot and injured Tuesday at a subway station in New York City during a morning rush hour attack that left wounded commuters bleeding on a train platform.(AP Photo/Kevin Hagen)According to multiple law enforcement sources briefed on the investigation, preliminary information indicated that the suspect who fled was a man wearing a construction vest and a gas mask.

Investigators believe the suspect deployed a smoke device before opening fire, one of the law enforcement officials said. Investigators are examining whether the suspect may have used that device in an effort to distract people before shooting, the official said.

Fire and police officials were investigating reports that there had been an explosion, but the police department tweeted that there were “no active explosive devices at this time.” Multiple smoke devices were found on the scene, said mayoral spokesperson Fabien Levy, who confirmed the initial shooting injury count.

At least 11 people were being treated at two local hospitals. No MTA workers were physically hurt, according to a statement from the Transport Workers Union Local 100. 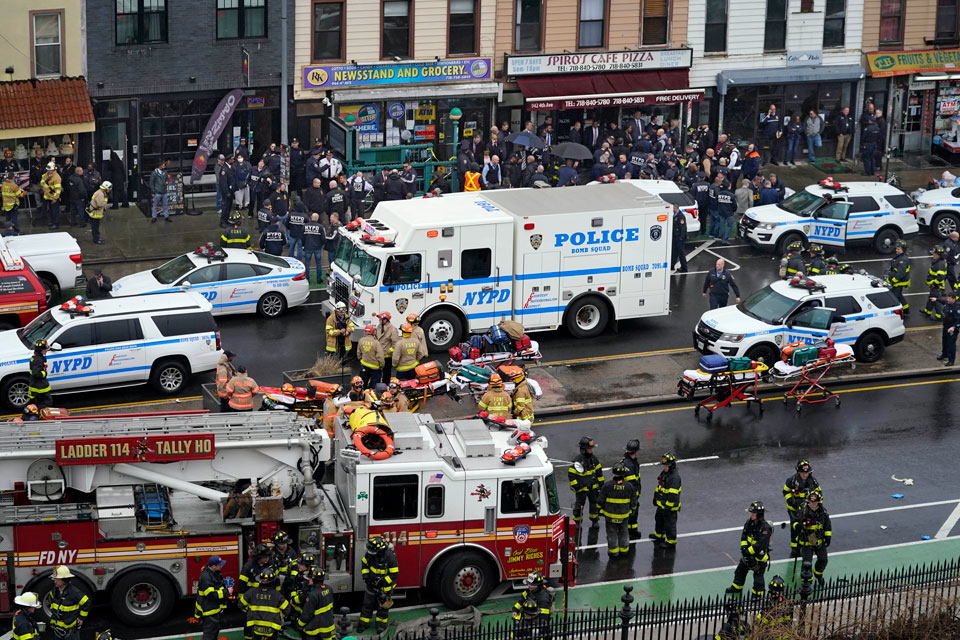 Emergency personnel gather at the entrance to a subway stop in the Brooklyn borough of New York, Tuesday, April 12, 2022. A gunman filled a rush-hour subway train with smoke and shot multiple people Tuesday, leaving wounded commuters bleeding on a platform as others ran screaming, authorities said. (AP Photo/John Minchillo)Juliana Fonda, a broadcast engineer at WNYC-FM, told its news site Gothamist she was riding the train when passengers from the car behind hers started banging on the door between them.

“There was a lot of loud pops, and there was smoke in the other car," she said.

"And people were trying to get in and they couldn’t, they were pounding on the door to get into our car.”

President Joe Biden and Attorney General Merrick Garland were briefed on the incident, as was Gov. Kathy Hochul. New York City Mayor Eric Adams, who is isolating following a positive COVID-19 test on Sunday, was briefed at the mayor’s residence. 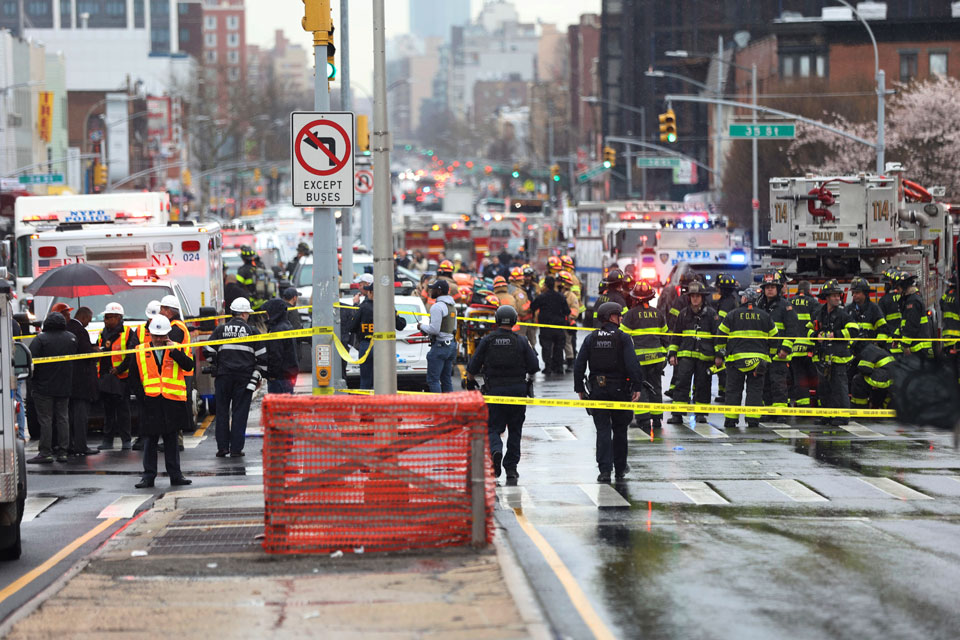 Law enforcement gather near the entrance to a subway stop in the Brooklyn borough of New York, Tuesday, April 12, 2022. Multiple people were shot and injured Tuesday at a subway station in New York City during a morning rush hour attack that left wounded commuters bleeding on a train platform.. (AP Photo/Kevin Hagen).The incident happened on a subway line that runs through south Brooklyn in a neighborhood about a 15-minute train ride to Manhattan. Local schools, including Sunset Park High School across the street, were locked down.

Danny Mastrogiorgio of Brooklyn had just dropped his son off at school when he saw a crush of passengers, some of them wounded, running up the subway stairway at the nearby 25th Street station in panic. At least two had visible leg injuries, he said.

“It was insane,” he told The Associated Press. “No one knew exactly what was going on.”

Allan Lee was running his business, Cafe Nube, when a half-dozen police cars and fire vehicles suddenly converged on the block that contains the 36th Street station.

“Then they started ushering people that were on the block to the adjacent block and then closed off the subway entrance” near the cafe’s door, he told the AP. When he noticed bomb squad officers and dogs, he was certain it was no everyday subway problem.

A sea of emergency lights was visible from at least a dozen blocks away, where a police cordon was set up.

New York City has faced a spate a shootings and high-profile incidents in recent months, including on the city’s subways. One of the most shocking was in January when a woman was pushed to her death in front of a train by a stranger.

Adams, a Democrat a little over 100 days into his term, has made cracking down on crime — especially on the subways — a focus of his early administration, pledging to send more police officers into stations and platforms for regular patrols. It wasn’t immediately clear whether officers had already been inside the station when the shootings occurred.