Cheers for Jackson, Who Declares, 'We've Made It, All of Us' 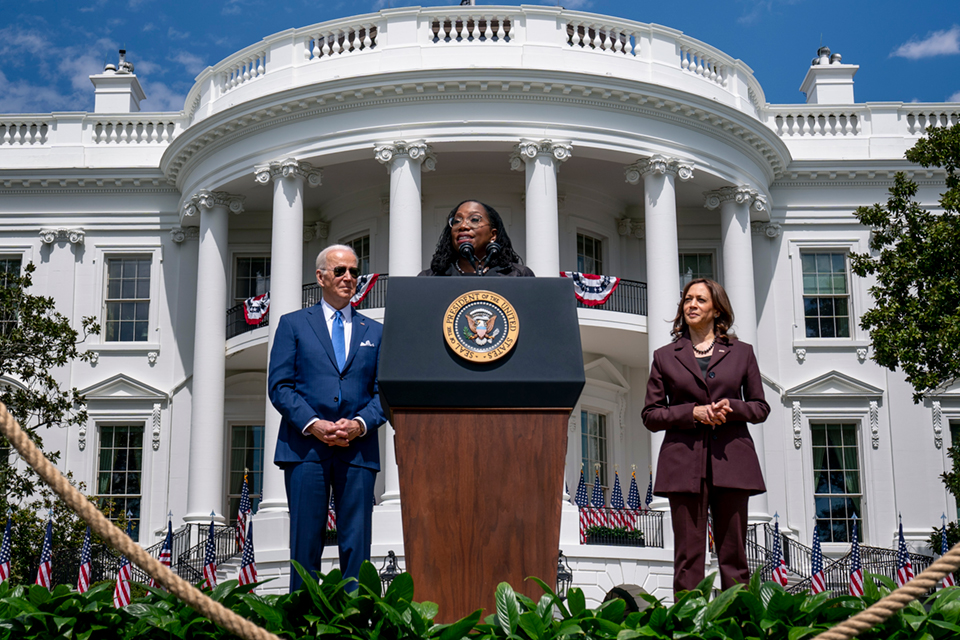 By ZEKE MILLER and WILL WEISSERT Associated Press
Published: 08 April 2022

WASHINGTON (AP) — Tearfully embracing a history-making moment, Judge Ketanji Brown Jackson said Friday her confirmation as the first Black woman to the Supreme Court showed the progress of America, declaring, ″We’ve made it — all of us."

Jackson delivered emotional remarks on the sunny White House South Lawn a day after the Senate approved her nomination, saying, it was a development the entire country could be proud of.

“We have come a long way toward perfecting our union"

she said. "In my family, it took just one generation to go from segregation to the Supreme Court of the United States.”

President Joe Biden, who made his own history by nominating her, stood by her side for Friday's event, celebrating her confirmation as “a moment of real change in American history.” On Jackson's other side: Vice President Kamala Harris, the first Black woman to attain her high office.

Jackson will take the bench later this year, filling the seat of retiring Justice Stephen Breyer on a court that was made up entirely of white men for almost two centuries, that declared her race unworthy of citizenship and endorsed American segregation.

“It has taken 232 years and 115 prior appointments for a Black woman to be selected to serve on the Supreme Court of the United States,” Jackson said. "But we’ve made it. We’ve made it, all of us.”

Jackson, at times speaking through tears as she thanked her family and mentors for their support, promised to follow in Breyer’s footsteps on the bench.

“I have done my level best to stay in my lane and to reach a result that is consistent with my understanding of the law,” she said, “And with the obligation to rule independently, without fear or favor.” 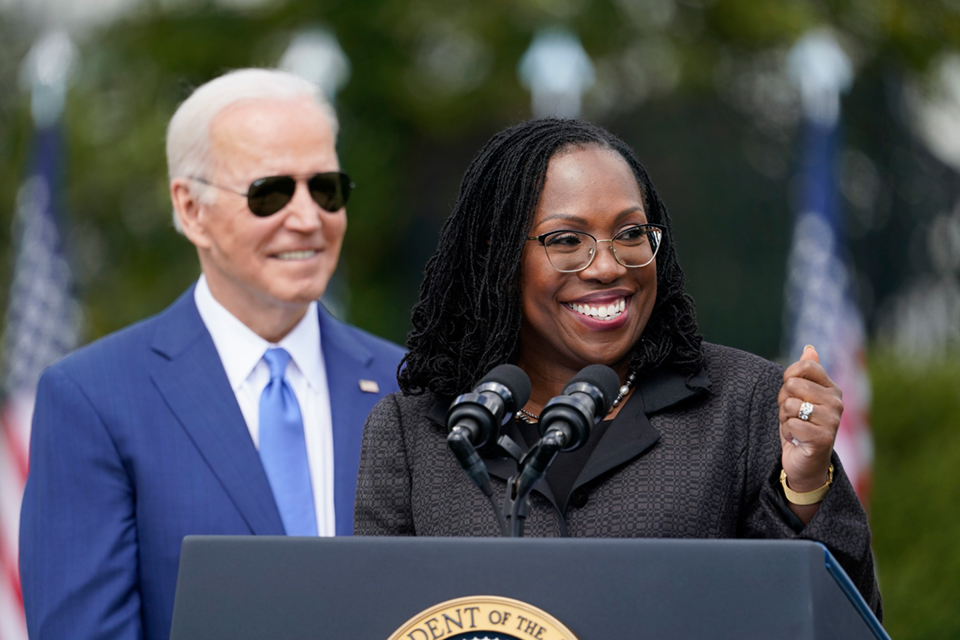 President Joe Biden listens as Judge Ketanji Brown Jackson speaks during an event on the South Lawn of the White House in Washington, Friday, April 8, 2022, celebrating the confirmation of Jackson as the first Black woman to reach the Supreme Court. (AP Photo/Andrew Harnik)

Jackson’s remarks on the White House lawn might be the most, and the last, the public hears from her for some time. She won’t formally join the court until early summer, and the justices won’t hear cases again until October. In any event, justices tend not to say much about themselves in their early years on the court, though some make sporadic public appearances and several have done speaking tours to pitch memoirs or their books about the law.

Jackson’s arrival on the bench won’t upend the current 6-3 conservative balance. But in addition to the racial history, it will for the first time put four women on the court at one time.

Biden nominated Jackson on the second anniversary of his pledge ahead of the South Carolina presidential primary to select a Black woman for the court. The move helped resurrect his flailing campaign and preserved his pathway to the White House, and Biden said the promise of putting someone like Jackson on the court helped motivate his bid for the Oval Office.

“I could see it as a day of hope, a day of promise, a day of progress, a day when once again the moral arc of the universe — as Barack (Obama) used to quote all the time — bends a little more toward justice,” Biden told the boisterous crowd on the South Lawn.

“I believe so strongly that we needed a court that looks like America.”

Racial questions aside, a number of Republican senators aggressively questioned Jackson during confirmation hearings, accusing her of liberal activism as an appeals court judge and being soft on crime in some of her sentencing.

Biden praised Jackson's “incredible character and integrity” during the confirmation process, saying she put up with "verbal abuse, the anger, constant interruptions, the most vile baseless assertions and accusations.” He praised the three Republican senators who joined Democrats to back her for the court: Maine Sen. Susan Collins, Alaska Sen. Lisa Murkowski and Utah Sen. Mitt Romney.

Jackson will be the high court’s first former public defender — with the elite legal background of other justices as well. She has degrees from Harvard and Harvard Law School and held top clerkships, including for Breyer himself. 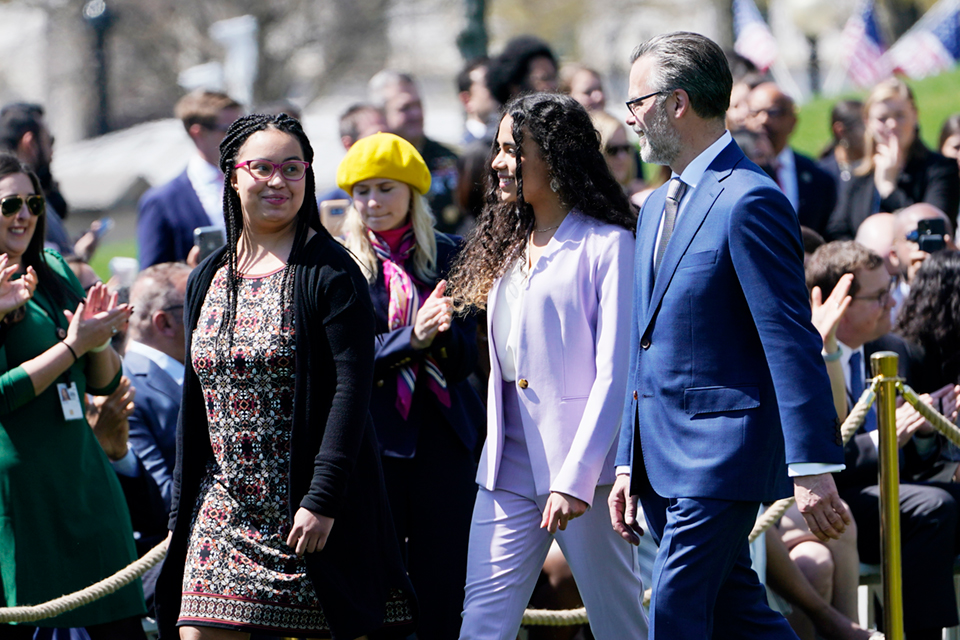 The crowd on the White House lawn included Jackson’s family, members of Biden’s Cabinet, some of the Democratic senators who backed her nomination, as well as Democratic representatives and allies. The White House said all current and former justices of the Supreme Court were invited, but none attended.

The event came amid a COVID-19 outbreak among Washington’s political class that has sidelined members of Biden’s administration and lawmakers, including Collins and Georgia Sen. Raphael Warnock, who tested positive for the virus just hours after voting for Brown’s confirmation. House Speaker Nancy Pelosi, who was on the invite list, tested positive for the virus on Thursday.

White House press secretary Jen Psaki on Thursday addressed concerns that the White House event could be a “super-spreader” for the virus, like President Donald Trump’s Rose Garden ceremony announcing the nomination of now-Justice Amy Coney Barrett. Psaki emphasized that the risks from the virus are now much lower because of vaccinations and treatments.

“At that point in time, vaccines were unavailable, people were not vaccinated, it certainly puts us in a different space,” Psaki said.

While not all attendees were tested for the virus, Psaki said those close to Biden would be. Harris delivered remarks, though she was identified on Wednesday as a close contact of a staffer who tested positive. Centers for Disease Control and Prevention guidelines require close contacts to wear masks while around other people. Harris did not wear one during the South Lawn event, and she hugged Jackson at the conclusion.

“She had an emotional moment, which is understandable,” said Psaki.

On Thursday, Jackson had joined Biden at the White House to watch the Senate vote unfold on TV, the two of them clasping hands in the Roosevelt Room as her confirmation became reality.

Throughout his 50 years in Washington, Biden has played an instrumental part in shaping the court, both inside and out of the Senate. But this was his first opportunity to make a selection of his own.

Biden may not get another chance. Senate Minority Leader Mitch McConnell, in an interview Thursday with Axios, refused to commit to hold confirmation hearings for a future Biden nominee to the high court if the GOP retakes control of the Senate in 2023. 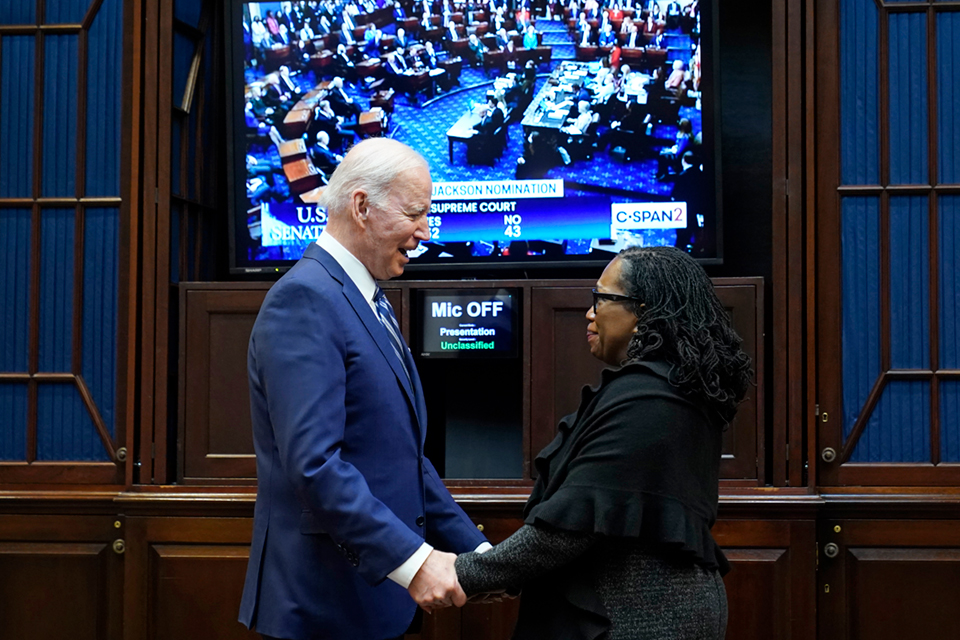 While Jackson awaits Breyer's official retirement, a White House official said, she will remain on the Court of Appeals for the District of Columbia Circuit but continue to recuse herself from cases.