Murkowski, Romney Back Jackson, All But Assure Confirmation 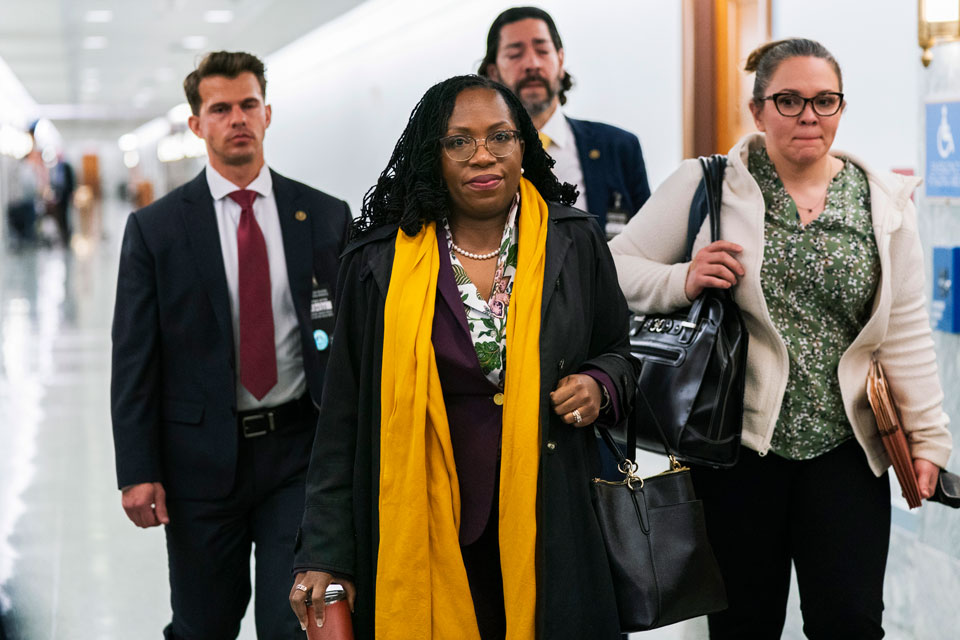 The senators from Alaska and Utah announced their decisions Monday night ahead of a procedural vote to advance the nomination and as Democrats pressed to confirm Jackson by the end of the week. GOP Sen. Susan Collins of Maine announced last week that she would back Jackson, noting her "stellar qualifications” as a federal judge, public defender and member of the U.S. Sentencing Commission. 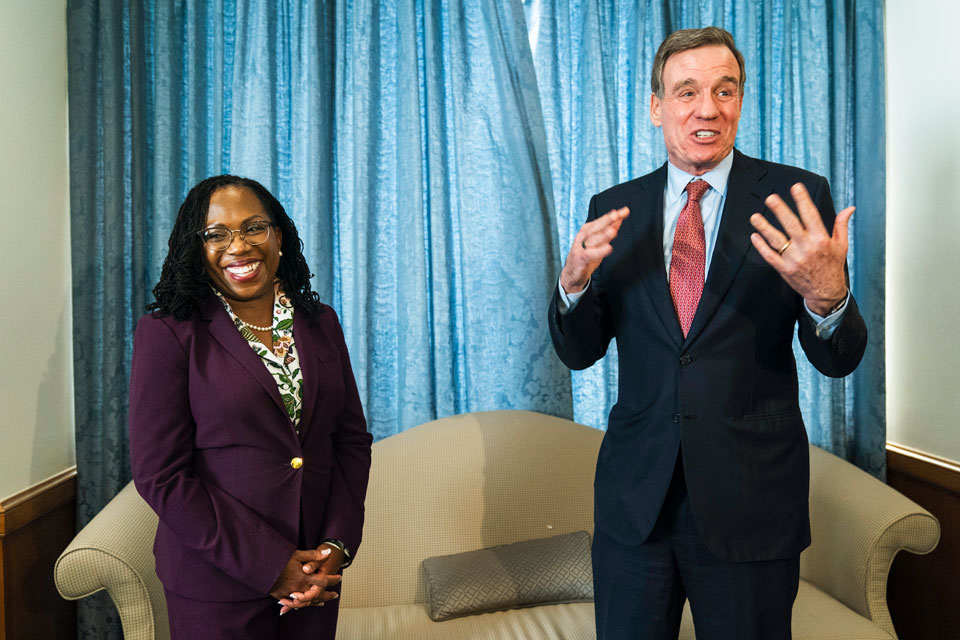 Murkowski said she will “bring to the Supreme Court a range of experience from the courtroom that few can match given her background in litigation.”

With three Republicans supporting her in the 50-50 split Senate, Jackson is on a glide path to confirmation and on the brink of making history as the third Black justice and only the sixth woman in the court’s more than 200-year history. Beyond the historic element, Democrats have cited her deep experience in nine years on the federal bench and the chance for her to become the first former public defender on the court.

Both Collins and Murkowski said they believed that the Senate nomination process has become broken as it has become more partisan in the past several decades.

Murkowski, who is up for reelection this year, said her decision partly rests “on my rejection of the corrosive politicization of the review process for Supreme Court nominees, which, on both sides of the aisle, is growing worse and more detached from reality by the year.”

After the vote, Murkowski said she had “assumed a level of risk” but "there’s three of us that found ourselves in this place where I believe the strength, qualifications of the candidate are such that are appropriate for the court.”

Biden nominated Jackson to replace retiring Justice Stephen Breyer, who will step down after the court's session ends this summer. Biden has sought bipartisan backing for his pick, making repeated calls to senators and inviting Republicans to the White House. White House press secretary Jen Psaki said Monday that administration officials would work the phones until the last minute to maximize support.

“Judge Jackson will bring extraordinary qualifications, deep experience and intellect, and a rigorous judicial record to the Supreme Court,” Biden tweeted earlier Monday. “She deserves to be confirmed as the next justice.”

The Senate's 53-47 vote Monday evening was to “discharge” Jackson's nomination from the Senate Judiciary Committee after the panel deadlocked, 11-11, on whether to send the nomination to the Senate floor.

The committee vote, split along party lines, was the first deadlock on a Supreme Court nomination in three decades. 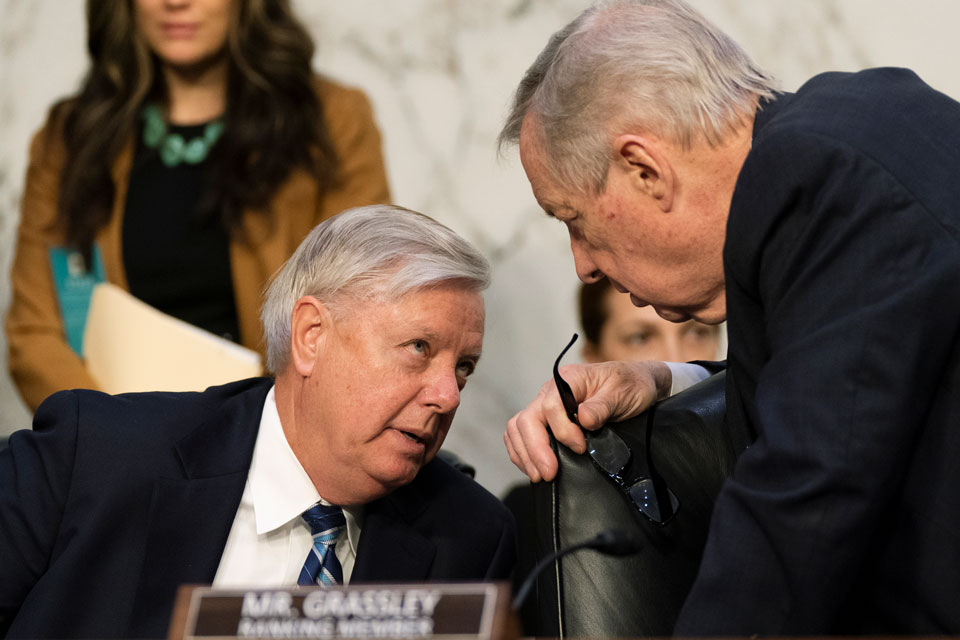 Senate Judiciary Committee Chairman Sen. Dick Durbin, D-Ill., right, talks to Sen. Lindsey Graham, R-S.C., before resuming the committee's business meeting to consider the confirmation of Supreme Court nominee Judge Ketanji Brown Jackson on Capitol Hill in Washington, Monday, April 4, 2022. Democrats are aiming to confirm her by the end of the week as the first Black woman on the court but Republicans are likely to try to drag out the process. (AP Photo/Manuel Balce Ceneta)The Judiciary committee’s top Republican, Iowa Sen. Chuck Grassley, said he opposed Jackson’s nomination because “she and I have fundamental, different views on the role of judges and the role that they should play in our system of government.” 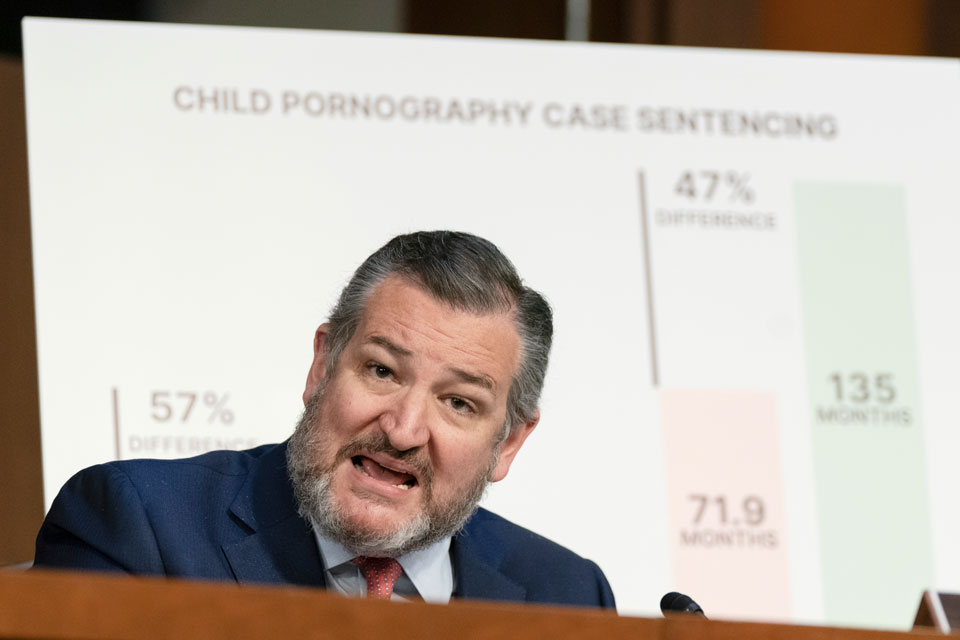 Senate Judiciary Committee member Sen. Ted Cruz, R-Texas, speaks during the committee's business meeting to consider the confirmation of Supreme Court nominee Judge Ketanji Brown Jackson on Capitol Hill in Washington, Monday, April 4, 2022. The Senate Judiciary Committee kicks off Monday morning with a vote on whether to move Jackson's nomination to the Senate floor. (AP Photo/Manuel Balce Ceneta)Senate Republican leader Mitch McConnell of Kentucky set the tone for most of his party last week when he said he “cannot and will not” support Jackson, citing GOP concerns raised in hearings about her sentencing record and her backing from liberal advocacy groups.

Republicans on the Judiciary panel continued their push Monday to paint Jackson as soft on crime, defending their repeated questions about her sentencing on sex crimes.

“Questions are not attacks,” said Marsha Blackburn of Tennessee, one of several GOP senators on the panel who hammered the point in the hearings two weeks ago. 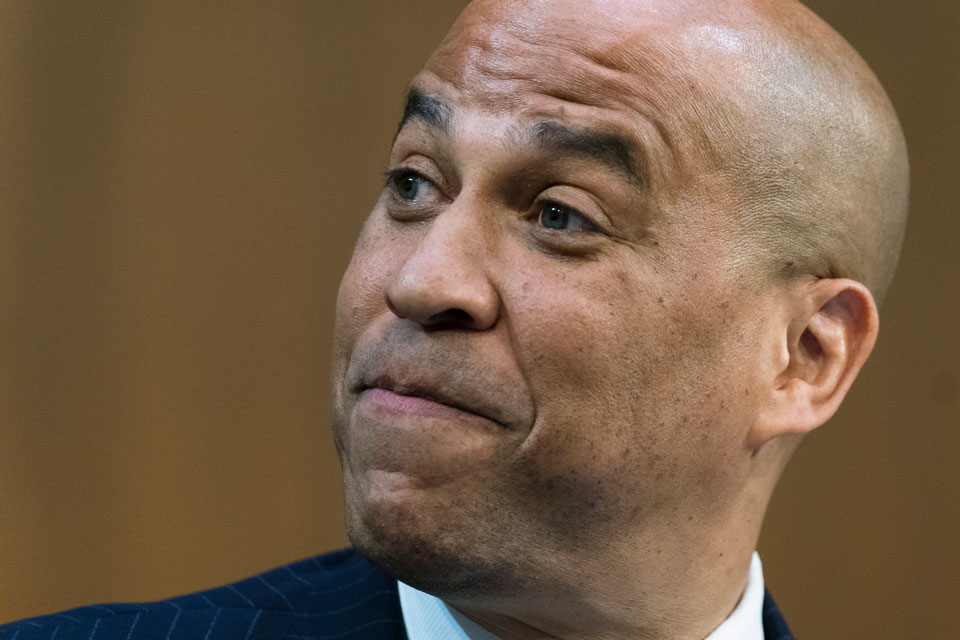 Senate Judiciary Committee member Sen. Cory Booker, D-N.J., speaks during the committee's business meeting to consider the confirmation of Supreme Court nominee Judge Ketanji Brown Jackson on Capitol Hill in Washington, Monday, April 4, 2022. The Senate Judiciary Committee kicks off Monday morning with a vote on whether to move Jackson's nomination to the Senate floor. (AP Photo/Manuel Balce Ceneta)Jackson pushed back on the GOP narrative, declaring that “nothing could be further from the truth" and explaining her reasoning in detail. Democrats said she was in line with other judges in her decisions. And on Monday they criticized their GOP counterparts' questioning.

“You could try and create a straw man here, but it does not hold,” said New Jersey Sen. Cory Booker.

The questioning was filled with “absurdities of disrespect,” said Booker, who also is Black. He said he will “rejoice” when Jackson is confirmed.

Derrick Johnson, president and chief executive officer of the NAACP, expressed disappointment with the committee tie, even as he noted that Jackson had cleared an important hurdle. He said “history will be watching" during the full Senate vote later this week.