Ukraine: Blinken Says US is Not Seeking Russian Regime Change 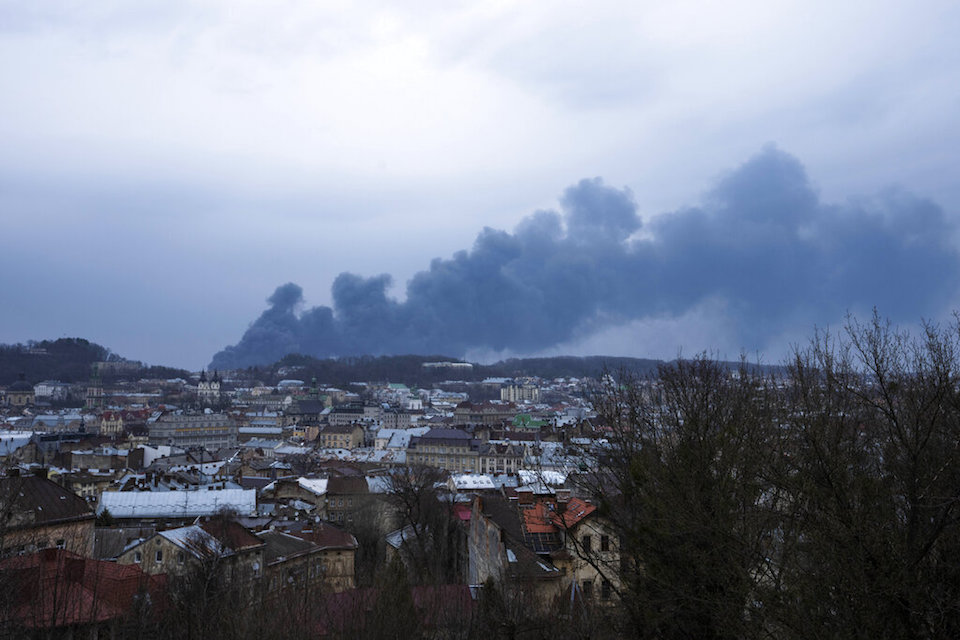 JERUSALEM — Secretary of State Antony Blinken says the U.S. is not trying to topple Russian President Vladimir Putin, despite its harsh condemnations of Russia’s invasion of Ukraine.

Blinken spoke a day after President Joe Biden said of Putin during a speech in Warsaw: “For God’s sake, this man cannot remain in power.”

At a news conference in Jerusalem, Blinken said Biden’s point was that “Putin cannot be empowered to wage war or engage in aggression against Ukraine or anyone else.”

He said the U.S. has repeatedly said that “we do not have a strategy of regime change in Russia, or anywhere else for that matter.”

“In this case, as in any case, it’s up to the people of the country in question. It’s up to the Russian people,” Blinken said.

Speaking in a video address early Sunday, Zelenskyy said that “our partners have all that, and it’s just collecting dust. And in fact it’s necessary not just for Ukraine’s freedom, but for the freedom of Europe.”

Zelenskyy warned that the Baltic states, Poland and Slovakia could eventually face a Russian attack “just because they will have kept in their hangars just 1% of all NATO warplanes and 1% of all NATO tanks. Just 1%! We aren’t asking for more and we have been waiting for that for 31 days!”

He said that “our partners must step up their aid to Ukraine.”

The president said that “Ukraine can’t shoot down Russian missiles with shotguns and machine guns that have accounted for the bulk of supplies. And we can’t unblock Mariupol without the necessary number of tanks, other armor, and warplanes. All defenders of Ukraine know about it.”

He added that the United States and “all European politicians” also know that.

DOHA, Qatar — The head of the International Monetary Fund is warning that the global economic strain caused by Russia’s war in Ukraine could stoke civil unrest in the Middle East and beyond.

Speaking at the Doha Forum in Qatar on Sunday, Kristalina Georgieva said Russia’s invasion and the resulting sanctions on Moscow have forced the world’s poorest to bear the worst of the crisis as they grapple with inflated food costs and scarcer jobs.

Georgieva hinted that the current situation evoked the lead-up to the 2011 uprisings known as the Arab Spring, when skyrocketing bread prices fueled anti-government protests across the Middle East.

“When prices jump, and poor people cannot feed their families, they will be on the streets,” she said. “One thing we know about trouble in one place, it travels, it doesn’t stay there.”

Georgieva called for greater global cooperation to fill the gaps in commodity and energy supplies.

“Please, work together,” she said. “Oil producers, gas producers and food producers today are in a position to help reduce this uncertainty.”

She cited Ukraine’s importance as a top wheat exporter in urging a swift resolution to the war.

“The faster the tanks are out, the faster the tractors will be in,” she said. “We need by July the harvest in Ukraine to contribute to the stability of food prices.”

Russian Defense Ministry spokesman Maj. Gen. Igor Konashenkov said in statement on Sunday that the air-launched cruise missiles hit a fuel depot and a defense plant in Lviv near the border with Poland a day earlier.

Konashenkov said another strike with sea-launched missiles destroyed a depot with air defense missiles in Plesetske, just west of the Ukrainian capital of Kyiv.

ODESA, Ukraine — The Black Sea port of Odesa is mining its beaches and rushing to defend its cultural heritage from a feared Mariupol-style fate in the face of growing alarm that the strategic city might be next as Russia attempts to strip Ukraine of its coastline.

The multi-cultural jewel, dear to Ukrainian hearts and even Russian ones, would be a hugely strategic win for Russia. It is the country’s largest port, crucial to grain and other exports, and headquarters for the Ukrainian navy.

Bombardment from the sea last weekend further raised worries that the city is in Russia’s sights.

Residents say Russian President Vladimir Putin would be insane to take Odesa with the brutal approach that has left other Ukrainian cities in ruins. Once a gilded powerhouse of the Russian empire, Odesa includes one of the finest opera houses in Europe and the famed Potemkin Steps between the city and the sea, featured in Soviet filmmaker Sergei Eisenstein’s 1925 silent film masterpiece “Battleship Potemkin.”

LONDON — The Russian military appears to be trying to encircle Ukrainian forces fighting in the separatist regions in the eastern part of the country, Britain’s Ministry of Defense says.

Russian forces are advancing southward from the area around Kharkiv and north from Mariupol, the ministry said in an intelligence briefing released Sunday morning.

Russia is relying on “stand-off” missiles launched from within its own territory to reduce aircraft exposure to Ukrainian anti-aircraft fire, the ministry said. But it said limited stocks of these weapons will force Russia to “revert to less sophisticated missiles or accepting more risk to their aircraft.”

LVIV, Ukraine — Ukrainian President Volodymyr Zelenskyy angrily warned Moscow that it is sowing a deep hatred for Russia among his people, as constant artillery barrages and aerial bombings are reducing cities to rubble, killing civilians and driving others into shelters, leaving them to scrounge for food and water to survive.

KYIV, Ukraine — Ukraine’s nuclear watchdog says that a nuclear research facility in Kharkiv again has come under shelling by Russia and the fighting makes it impossible to assess the damage.

The State Nuclear Regulatory Inspectorate said that the neutron source experimental facility in the Kharkiv Institute of Physics and Technology came under fire Saturday.

Ukrainian authorities have previously reported that Russian shelling damaged buildings at the Kharkiv facility, but there has been no release of radiation. The newly built neutron source facility is intended for the research and production of radioisotopes for medical and industrial needs. The International Atomic Energy Agency has said that the nuclear material in the facility is always subcritical and the inventory of radioactive material is very low, reducing the risks of radiation release.

Kharkiv has been besieged by Russian forces since the start of the invasion and has come under repeated shelling of its residential buildings and critical infrastructure.

Ukraine’s nuclear facilities have been threatened by the Russian invasion.

LVIV, Ukraine — The governor of the Lviv region says a man was detained on suspicion of espionage at the site of one of the two rocket attacks that rattled the city on Saturday.

Maksym Kozytskyy said police found the man had recorded a rocket flying toward the target and striking it. Police also found on his telephone photos of checkpoints in the region, which Kozytskyy said had been sent to two Russian telephone numbers.

Rockets hit an oil storage facility and an unspecified industrial facility, wounding at least five people. A thick plume of smoke and towering flames could be seen on Lviv’s outskirts hours after the attacks.