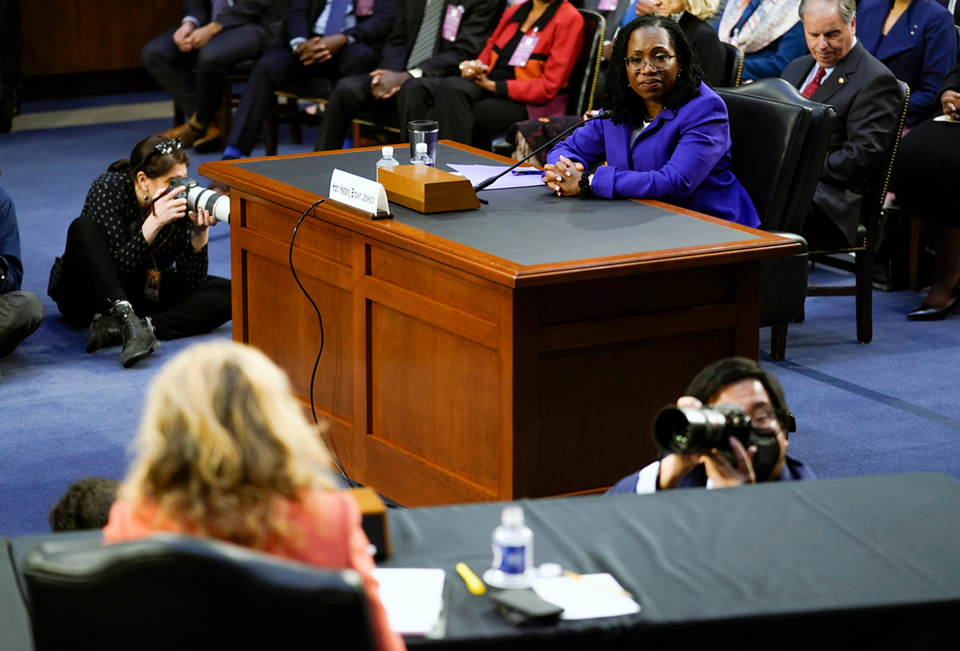 WASHINGTON (AP) — Republican Sen. Marsha Blackburn mischaracterized Supreme Court nominee Ketanji Brown Jackson's judicial views as extremist and soft on crime, claiming she called for critical race theory to be a mandatory consideration in federal sentencing and sought to release all criminals during the pandemic.

Jackson didn't on either front.

Blackburn joined Sen. Josh Hawley and other Republicans during the confirmation hearings in airing a line of conservative grievances that relied on a distortion of the judge's record.

A look at some of the claims and reality:

BLACKBURN: “You have made clear that you believe judges must consider critical race theory when deciding how to sentence criminal defendants.” — remarks Monday.

THE FACTS: Not true. Jackson never called for it to be incorporated in federal sentencing.

“Critical race theory” is a broad-based term. It started as a line of thinking in law schools that racism is systemic in the nation’s institutions. Many Republicans have since cast it as a culture-war effort to rewrite American history and persuade white people that they are inherently racist. Still, there actually is little to no evidence that critical race theory itself is being taught to K-12 public school students, though some ideas central to it, such as lingering consequences of slavery, have been.

Blackburn appeared to be referring to a speech in which Jackson described how she encouraged students to study federal sentencing policy as an academic area implicating many topics.

“Sentencing is just plain interesting on an intellectual level, in part because it melds together myriad types of law — criminal law, of course, but also administrative law, constitutional law, critical race theory, negotiations, and to some extent, even contracts,” Jackson said in her speech. “And if that’s not enough to prove to them that sentencing is a subject ... worth studying, I point out that sentencing policy implicates and intersects with various other intellectual disciplines as well, including philosophy, psychology, history, statistics, economics, and politics.”

In other words, she indicates that “critical race theory” might be one of many potential factors in play in sentencing, not a mandatory consideration.

BLACKBURN: “At the start of the COVID-19 pandemic, you advocated and again I quote, ‘for each and every criminal defendant’ in the D.C. Department of Corrections custody, ‘should be released.’ That would have been 1,500 criminals back on the street if you had had your way.” — remarks Monday.

THE FACTS: Blackburn is quoting Jackson out of context. As a federal court judge, Jackson actually did not release criminal defendants en masse onto the streets.

As a U.S. district court judge, Jackson wrote in an April 2020 case that the health dangers of COVID-19 could “reasonably suggest” that defendants in the D.C. correctional facilities should be released from there. Ultimately, however, the judge ruled against releasing a prisoner who was requesting home detention after review of his individual health history and severity of offenses, concluding he was a danger to society.

At the time, COVID-19 was spiking unabated across the U.S., more than 40 D.C. inmates had tested positive and even prosecutors in the case acknowledged a health threat. The Justice Department in 2020 and 2021 separately decided to release thousands of inmates to home confinement as the pandemic ravaged federal prisons.

“The obvious increased risk of harm that the COVID-19 pandemic poses to individuals who have been detained in the District’s correctional facilities reasonably suggests that each and every criminal defendant who is currently in D.C. DOC (Department of Corrections) custody — and who thus cannot take independent measures to control their own hygiene and distance themselves from others — should be released,” Jackson said in her ruling.

Jackson, however, then proceeded to lay out the law and concluded it falls to the courts to rule “case by case” whether to release consistent “with the dictates of the law.”

In the case at hand, Jackson ruled that the young, healthy and violent criminal who wanted out did not merit release.

The nonpartisan Congressional Research Service, in reviewing her wider judicial record, said Jackson was “case-specific” when weighing whether criminal defendants should be released based on COVID concerns and “did not rely on it to grant release automatically.”