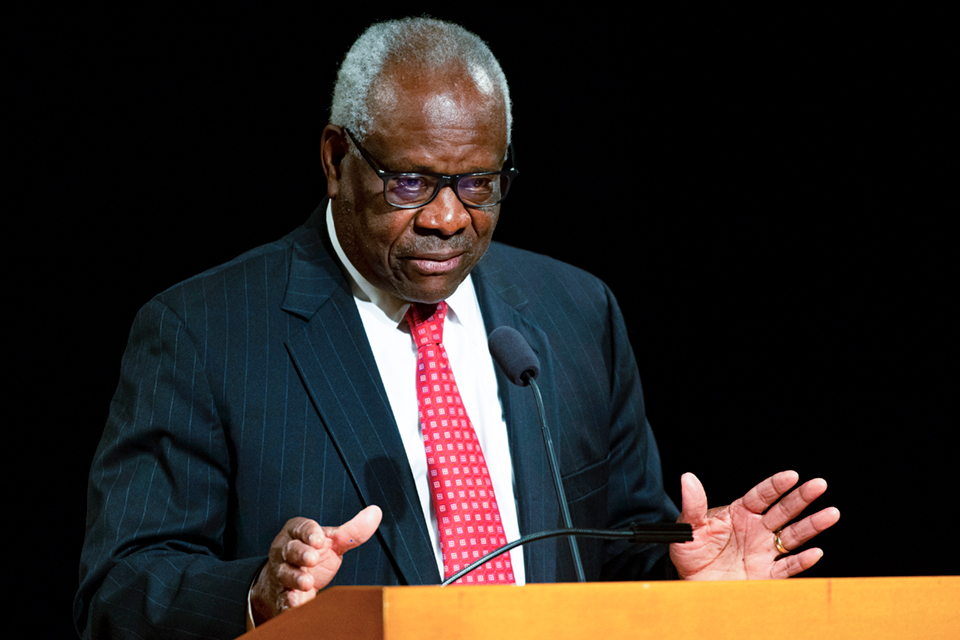 WASHINGTON (AP) — Justice Clarence Thomas remains hospitalized in Washington after being diagnosed with an infection but does not have COVID-19, the Supreme Court said Monday.

The high court announced Sunday evening that the 73-year-old justice had entered the hospital Friday after experiencing “flu-like symptoms” and underwent tests. The court said that Thomas was diagnosed with an infection and was being treated with intravenous antibiotics. The court said at the time that “his symptoms are abating," but it did not say that Thomas had tested negative for the virus.

At arguments at the court Monday, Thomas’ chair to the right of Chief Justice John Roberts was empty and Roberts took note of Thomas’ absence without explaining why. He said Thomas would take part in the cases based on written briefs and recordings of the in-court arguments. Thomas, who has been on the court since 1991, is currently its longest-serving justice.

News of Thomas’ hospitalization came just before the Senate Judiciary Committee opened hearings Monday on the nomination of Ketanji Brown Jackson, whom President Joe Biden has named to replace retiring Justice Stephen Breyer. If confirmed, she would be the first Black woman on the court, but her confirmation would not change the ideological balance on the court. Thomas is the court's second Black justice ever and one of six conservatives now on the court.

Some questions and answers about Thomas’ hospitalization:

The court provided no additional information about the infection that put Thomas in the hospital other than to say he is responding to intravenous antibiotics. There was no indication about the seriousness of the infection or what caused it, but the court said Sunday evening he was expected to be out in a day or two.

Thomas has no known health conditions, but justices make their own decisions about what health information to release and when. The court has said that all nine justices have received the COVID-19 vaccine and booster shot.

The court does occasionally release health and other information about various justices. Its website contains press releases going back to late 2002, including releases about health issues of other justices. Sunday's news appeared to be the first time the court issued health information about Thomas in that way.

Is it odd the public didn’t immediately know Thomas was hospitalized?

No. The court offered no explanation for why it waited two days to disclose that the justice was in the hospital, but it’s not always apparent when the justices are getting medical treatment.

For example, the late Justice Ruth Bader Ginsburg was fairly forthcoming about her many health issues over the years, including several bouts with cancer. But in 2020 she waited more than four months to reveal that her cancer had returned and that she was undergoing chemotherapy.

That same year, Chief Justice John Roberts spent a night in a hospital after he fell and injured his forehead and needed stitches. The injury wasn't disclosed until a month later, and then only because The Washington Post learned of it.

Now-retired Justice Anthony Kennedy has been similarly mum. In 2005 he said nothing publicly when he had a stent inserted to keep an artery open after experiencing mild chest pain. The court only revealed the procedure when Kennedy returned to the hospital to have the stent replaced 10 months later.

Is it the first time a justice has missed arguments but still voted on a case?

No, and there are other recent examples. At the beginning of 2019 when Ginsburg was recovering from cancer surgery she missed arguments but participated in decisions based on the briefs and transcripts of the arguments. She ultimately missed six days on which the court heard a total of eleven arguments and returned to the courtroom for arguments the following month.

In 2004 and 2005, when Chief Justice William Rehnquist was suffering from thyroid cancer and was not on the bench for 44 arguments over five months. Rehnquist voted in most of the cases for which he did not attend the arguments.

Could Thomas have still participated in arguments from the hospital?

For whatever reason, Thomas isn’t doing that. If he had, however, he wouldn’t have been the first justice to participate in arguments from a hospital. Ginsburg participated remotely from Johns Hopkins Hospital in Baltimore in 2020 while hospitalized with an infection caused by a gallstone. At the time, all the justices were participating remotely and the court was hearing arguments by phone because of the coronavirus pandemic.

The justices returned to in-person arguments in October after more than a year and a half of telephone arguments. The courtroom is still closed to the public, however, because of the pandemic.