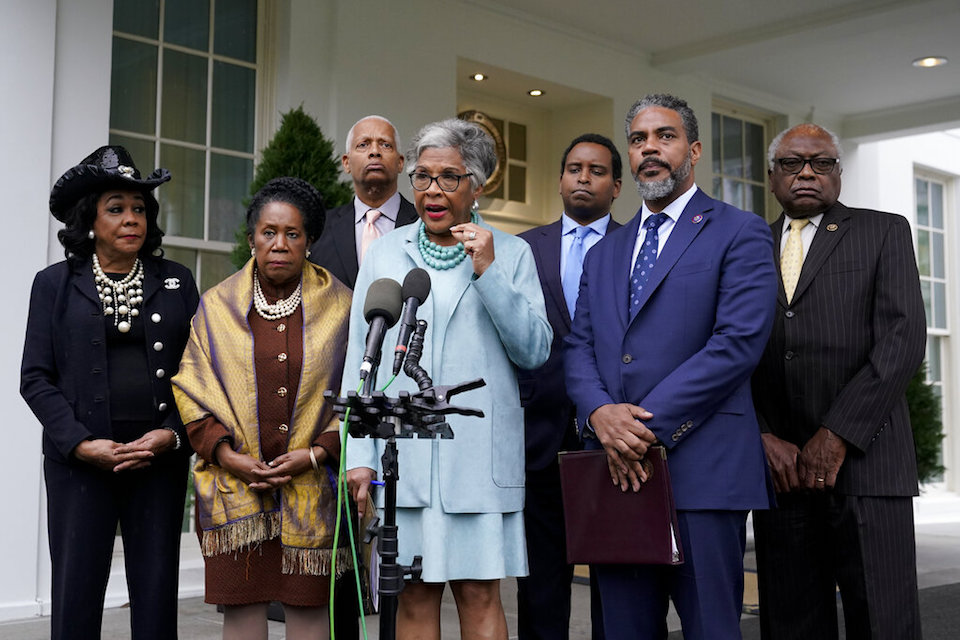 PHILADELPHIA (AP) — Top Democrats are pleading for President Joe Biden to act alone on some of the party’s core legislative priorities, viewing executive action as their best hope of delivering on their promises and energizing liberal voters they worry are going to sit out the elections in November.

In areas like voting rights, police reform and immigration where Democratic bills have been thwarted by GOP opposition in the Senate, the leaders of the influential Black and Asian American caucuses made their requests directly to Biden during a recent meeting at the White House, urging him to issue executive orders that could push their proposals forward without votes in the House and Senate.

The pleas come at a particularly desperate moment for House Democrats, who are heading into a difficult midterm election season where the loss of only a handful of seats will end their majority.

Biden’s struggling poll numbers are adding to the steep headwinds Democrats are facing in a midterm election year that historically has been unfavorable to the party in power.

“I don’t want anyone to think that we believe that executive action is better than legislation,” said Rep. Pramila Jayapal, chair of the Progressive Caucus, during the House Democratic issues conference in Philadelphia.

“But certainly, there are a lot of areas where if we don’t get legislation, the administration can take action to help move us more quickly towards the goals that we’re working on.”

During the recent meeting with Biden, the caucuses’ leaders seemed to acknowledge the damage done in recent months, when intraparty squabbling led them to many legislative dead ends.

The way to turn things around, argued Black Caucus Chair Joyce Beatty, Hispanic Caucus Chair Raul Ruiz and Asian American Caucus Chair Judy Chu — recalling the case they each made or will make to Biden — is for the president to put pen to pad.

“The Congressional Black Caucus has not been silenced for this,” Beatty said of the caucus’ efforts to move forward with voting rights. “We know the value and importance of preclearance for us,” referring to the Voting Rights Act requirement that mandates states or localities with a history of racial voting discrimination get federal approval for election policy changes.

Jayapal and Ruiz told reporters that the Progressive and Hispanic caucuses will be releasing a list next week of their own priorities for executive action.

Reliance on executive action is a strategy that Biden knows well, having seen it in action when he was President Barack Obama's vice president.

Facing a GOP-controlled Congress in 2014, Obama declared that he had a “pen and a phone” and began taking executive actions on matters like guns and immigration.

Biden has acted unilaterally as well, most recently on a series of orders punishing Russia for the invasion of Ukraine. But there are considerable limits to what a president can accomplish through executive action, which is why it is often the option of last resort.

The hunger among Democrats for Biden to go it alone is widely shared. House leadership and rank-and-file members echoed Jayapal’s sentiments on the path forward as Democrats gathered for their annual issues conference in Philadelphia — an event that almost didn’t happen, fittingly enough, due to party infighting over new emergency funding for COVID-19 relief.

Looking for a reset

The one-and-a-half-day retreat was expected to be a reset for a caucus desperately in need of one as a record number of members are retiring and those facing reelection are being challenged by strong, money-backed and, in some cases, Donald Trump-approved candidates.

After Biden gave the Democrats a pep talk Friday, many of the Democrats agreed that he might be their only chance in the next 10 months to make good on the promises made to Democratic voters who handed them the House, Senate and the White House just a year and a half ago.

Even House Speaker Nancy Pelosi, the party’s master legislator, seemed to give a nod toward the White House.

“It’s very important for the executive to act if we cannot get legislative action immediately,” Pelosi told reporters Friday.

The failure in January on one of the major legislative priorities, voting rights legislation, was still fresh for many members, including House Majority Whip Jim Clyburn.

The voting rights package collapsed on the Senate floor in January after Democratic centrist Sens. Joe Manchin of West Virginia and Krysten Sinema of Arizona refused to change the procedural rules necessary to allow the bill to push past a Republican-led filibuster on a majority vote.

Democrats say action is still needed to combat a new wave of voter suppression that is sweeping the country.

Clyburn, who was at the meeting with Biden at the White House last Monday, said he reminded the president of the power executive orders have had in history, including the freeing of slaves in 1863 — two years before the 13th Amendment was passed by Congress.

“When we review our history as a country — a great country — often, more often than not, we see great leadership in our executive, showing the Congress where to go," Clyburn said.

"Before Congress could act on the institution of slavery, Abraham Lincoln used executive order.”

He added, “I think you’ll find that through history sometimes, the Congress, the people need to be nudged by the person being chosen to lead.”