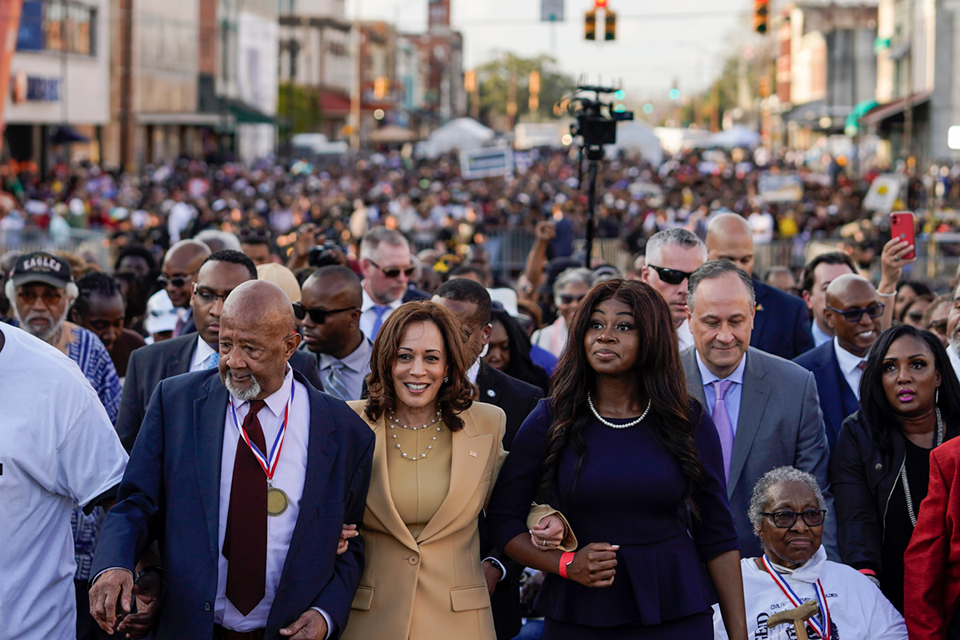 SELMA, Ala. (AP) — Vice President Kamala Harris visited Selma, Alabama, on Sunday to commemorate a defining moment in the fight for equal voting rights, even as congressional efforts to restore the landmark 1965 Voting Rights Act have faltered.

Under a blazing blue sky, Harris linked arms with rank-and-file activists from the civil rights movement and led thousands across the bridge where, on March 7, 1965, white state troopers attacked Black voting rights marchers attempting to cross. The images of violence at the Edmund Pettus Bridge — originally named for a Confederate general — shocked the nation and helped galvanize support for passage of the Voting Rights Act.

Harris called the site hallowed ground where people fought for the “most fundamental right of American citizenship: the right to vote.”

“Today, we stand on this bridge at a different time,” Harris said in a speech before the gathered crowd. “We again, however, find ourselves caught in between. Between injustice and justice. Between disappointment and determination. Still in a fight to form a more perfect union. And nowhere is that more clear than when it comes to the ongoing fight to secure the freedom to vote.” 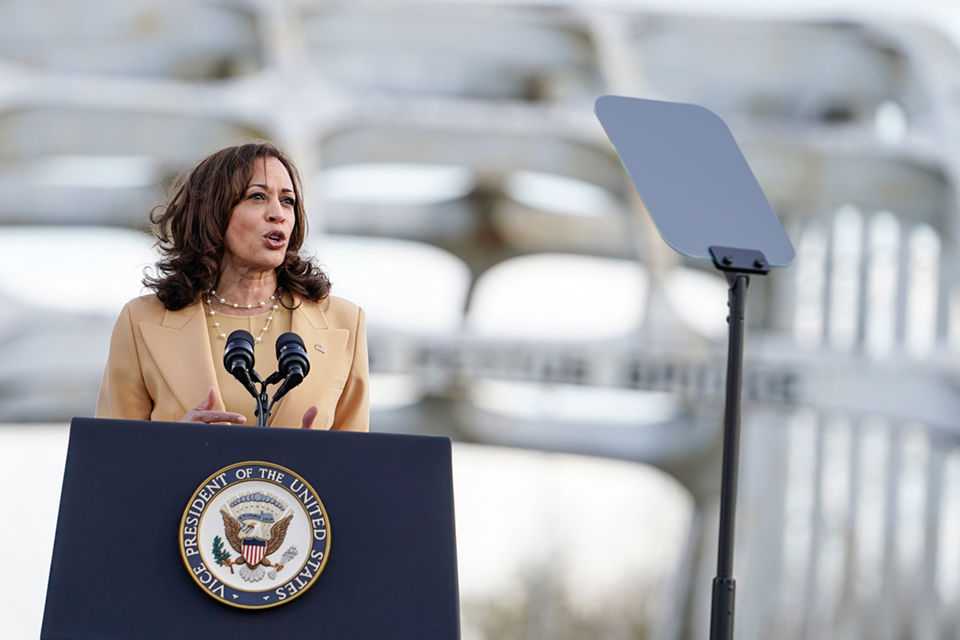 Vice President Kamala Harris speaks near the Edmund Pettus Bridge in Selma, Ala., on the anniversary of "Bloody Sunday," a landmark event of the civil rights movement, Sunday, March 6, 2022. (AP Photo/Brynn Anderson)

The nation’s first female vice president — as well as the first African American and Indian American in the role — spoke of marchers whose “peaceful protest was met with crushing violence. They were kneeling when the state troopers charged. They were praying when the billy clubs struck.”

Police beat and tear-gassed the marchers, fracturing the skull of young activist John Lewis, a lion of the civil rights movement who went on to long and celebrated career as a Georgia congressman. 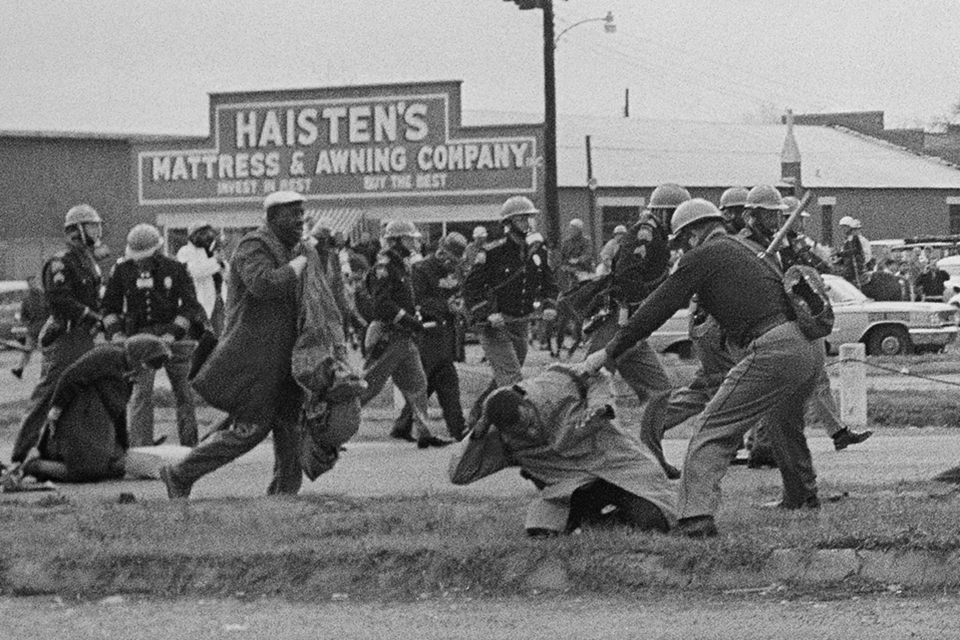 FILE - Alabama state troopers attack voting rights demonstrators in Selma, Ala., in this file photo from March 7, 1965. Despite being known worldwide as a beacon of voting rights, the city and surrounding Dallas County had one of the worst voter turnouts in Alabama for the 2020 presidential election, and some are trying to increase voter participation. (AP Photo/File)

President Joe Biden on Sunday renewed his call for the passage of voting legislation, saying the groundbreaking 1965 Voting Rights Act “has been weakened not by brute force, but by insidious court decisions.”

The proposed legislation is named for Lewis, who died in 2020, and is part of a broader elections package that collapsed in the U.S. Senate earlier this year.

“In Selma, the blood of John Lewis and so many other courageous Americans sanctified a noble struggle. We are determined to honor that legacy by passing legislation to protect the right to vote and uphold the integrity of our elections,” Biden said in a statement.

Democrats have been unsuccessfully trying to update the landmark law and pass additional measures to make it more convenient for people to vote. A key provision of the law was tossed out by a U.S. Supreme Court decision in 2013.

Among those gathered Sunday were rank-and-file activists from the 1965 march. Harris walked across the bridge beside Charles Mauldin, who was sixth in line behind Lewis on Bloody Sunday and was beaten with a night stick.

Two women who fled the violence said having a Black woman as vice president seemed unimaginable 57 years ago.

But Boynton said the anniversary is tempered by fears of the impact of new voting restrictions being enacted.

“And now they are trying to take our voting rights from us."

Ora Bell Shannon, 90, of Selma, was a young mother during the march and ran from the bridge with her children. Ahead of Bloody Sunday, she and other Black citizens stood in line for days at a time trying to register to vote in the then white-controlled city, facing impossible voter tests and long lines.

“They knew you wouldn’t be able to pass the test,” Shannon recalled. 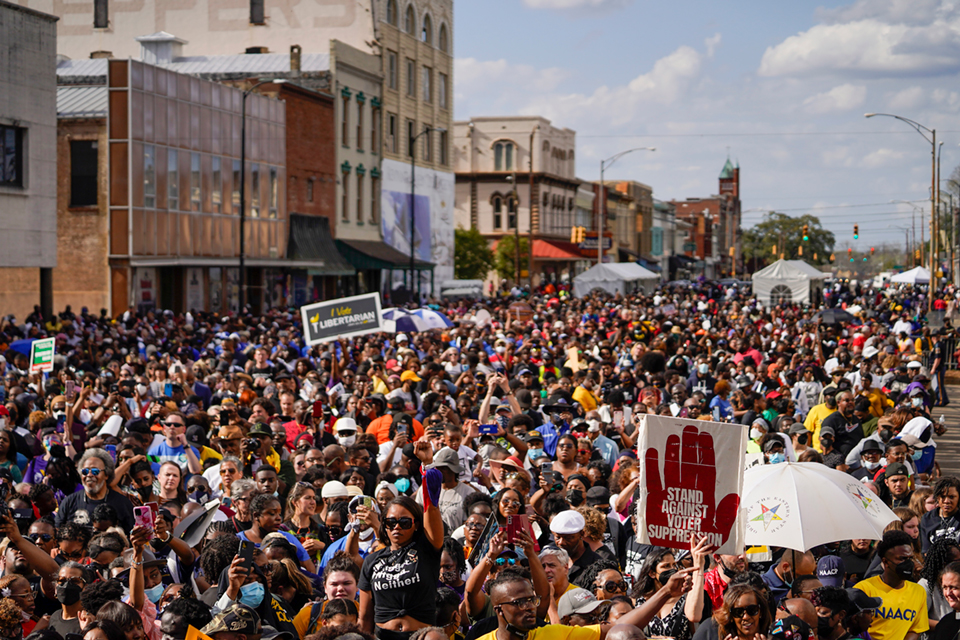 Vice President Kamala Harris marches on the Edmund Pettus Bridge after speaking in Selma, Ala., on the anniversary of "Bloody Sunday," a landmark event of the civil rights movement, Sunday, March 6, 2022. (AP Photo/Brynn Anderson)

The U.S. Supreme Court in 2013 gutted a portion of the 1965 law that required certain states with a history of discrimination in voting, mainly in the South, to get U.S. Justice Department approval before changing the way they hold elections.