Harris on Ukraine: World is at 'Decisive Moment in History' 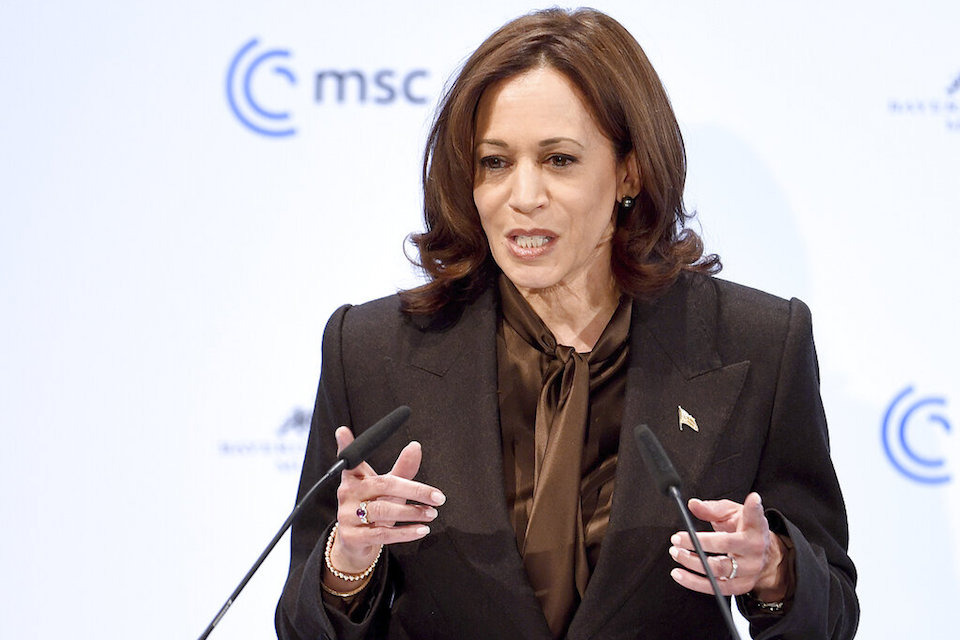 MUNICH (AP) — Vice President Kamala Harris said Saturday that the world has arrived at “a decisive moment in history” as the Biden administration warns a Russian invasion of Ukraine in the coming days is highly likely.

During a meeting with Ukraine's President Volodymyr Zelenskyy on the sidelines of the Munich Security Conference, Harris vowed that the U.S. was committed to Ukraine's sovereignty. The vice president also used an address at the conference to reiterate the Biden administration's promise to hit Russia with economy-jarring sanctions if it invades Ukraine again, following the 2014 seizure of Crimea.

“Let me be clear, I can say with absolute certainty: If Russia further invades Ukraine, the United States, together with our allies and partners, will impose significant and unprecedented economic costs,” Harris said.

Harris addressed the annual Munich conference the day after President Joe Biden said he was “convinced” that Russia's Vladimir Putin has made the decision to invade neighboring Ukraine.

Harris made the case to a largely European audience that the West has “strength through unity” and that an invasion would likely lead to an even bigger NATO presence on Russia’s doorstep.

Later, at the start of the meeting with Ukraine's leader, Harris called it “a decisive moment in history" and told Zelenskyy, “Any threat to your country we take seriously.”

He responded: “We clearly understand what is going on. This is our land. We want peace.”

He said he needs Western allies to take “specific steps,” alluding to Ukraine’s requests for even more military and economic assistance. Zelenskyy also noted that with Russian troops at his country’s borders, Ukraine’s army is in fact “defending all of Europe.”

Harris herself remarked about the perilousness of the moment in her address at the conference, noting that “not since the end of the Cold War has this forum convened under such dire circumstances.”

“Today, as we are all well aware, the foundation of European security is under direct threat in Ukraine,” she said.

Russia annexed Ukraine’s Crimean Peninsula in 2014 and fomented a rebellion in eastern Ukraine, where pro-Russia separatists have been fighting Ukrainian forces for almost eight years. The United States and the European Union previously sanctioned Russia over its seizure of Crimea.

Western fears of an invasion have escalated in recent months as Russia amassed more than 150,000 troops near Ukraine's borders.

Harris said the Biden administration, along with its allies, had tried to engage with Moscow in good faith to find a diplomatic resolution but that effort was not reciprocated by the Kremlin.

“Russia continues to say it is ready to talk while at the same time it narrows the avenues for diplomacy,” Harris said. “Their actions simply do not match their words.”

Harris credited European allies for speaking with a largely unified voice as the latest Ukraine crisis has unfolded. The vice president said Republicans and Democrats in Washington — who rarely agree on major issues — are generally in agreement on the necessity of confronting Putin.

“We didn’t all start out in the same place,” Harris said. “We came together and are now speaking with a unified voice. And that voice was a function of not only dialogue and debate, some concessions, but also the practical realization of the moment that we are in, which is that we are looking at a sovereign nation that may very well be on the verge of being invaded yet again.”

Harris on Friday met in Munich with the leaders of Estonia, Latvia and Lithuania, who stressed that an increase in the U.S. troop presence on the eastern edge of NATO is necessary.

The White House has not yet said whether it will fulfill those requests, but Harris suggested in her address on Saturday that an invasion could lead to a bolstered American presence.

“The imposition of these sweeping and coordinated measures will inflict great damage on those who must be held accountable. And we will not stop with economic measures,” Harris said. “We will further reinforce our NATO allies on the eastern flank.”

Biden and other U.S. officials have offered increasingly dire warnings that the window for diplomacy is narrow.

Biden told reporters Friday that he believes Putin has decided to invade in the coming days, taking military action that could go far beyond the disputed Donbas region in eastern Ukraine and include the capital, Kyiv.

Hundreds of artillery shells exploded along the contact line between Ukrainian soldiers and Russia-backed separatists, and thousands of people evacuated eastern Ukraine, further increasing fears Sunday that the volatile region could spark a Russian invasion.

Ukrainian President Volodymyr Zelenskyy called on Russian President Vladimir Putin to choose a place to meet where the two leaders could meet to try to resolve the crisis. Russia has denied plans to invade.

“Ukraine will continue to follow only the diplomatic path for the sake of a peaceful settlement,” Zelenskyy said Saturday at an international security conference in Munich, Germany. There was no immediate response from the Kremlin.

“We cannot forever offer an olive branch while Russia conducts missile tests and continues to amass troops,” Michel, the president of the European Council, said at the Munich Security Conference. He said, “One thing is certain: if there is further military aggression, we will react with massive sanctions.”

Separatist leaders in eastern Ukraine on Saturday ordered a full military mobilization and sent more civilians to Russia, which has issued about 700,000 passports to residents of the rebel-held territories. Claims that Russian citizens are being endangered might be used as justification for military action.

Germany and Austria told their citizens to leave Ukraine. German air carrier Lufthansa canceled flights to the capital, Kyiv, and to Odesa, a Black Sea port that could be a key target in an invasion.

NATO’s liaison office in Kyiv said it was relocating staff to Brussels and to the western Ukraine city of Lviv.

“They are uncoiling and are now poised to strike, ” U.S. Defense Secretary Lloyd Austin said Saturday of Russia's readiness to launch an attack.

U.S. President Joe Biden said late Friday that based on the latest American intelligence, he was now “convinced” that Putin has decided to invade Ukraine in coming days and assault the capital.

A U.S. military official said an estimated 40% to 50% of those ground forces have moved into attack positions closer to the border. The official, who spoke on condition of anonymity to discuss internal U.S. assessments, said the change has been underway for about a week and does not necessarily mean Putin has settled on an invasion.