Sharpton: Without No-Knock Warrant Amir Locke Would be Alive 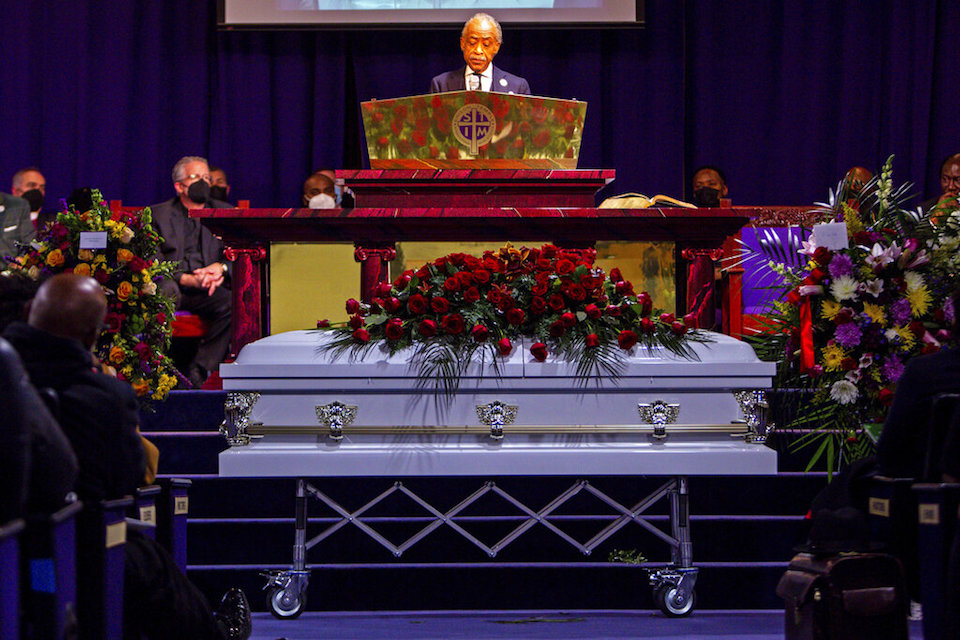 MINNEAPOLIS (AP) — The Rev. Al Sharpton told the hundreds gathered Thursday for Amir Locke's funeral that the 22-year-old Black man would still be alive if Minneapolis had banned no-knock warrants.

Sharpton was among several speakers who paid tribute to Locke and other Black people who have died in encounters with police. Along with song and prayer, the service at Shiloh Temple International Ministries included strong condemnations of racism in policing and emphatic demands for change.

"Amir was not guilty of anything but being young and Black in America," Sharpton said. He said if Minneapolis had banned no-knock warrants “we wouldn’t be at a funeral this morning.”

Sharpton also noted that February is Black History Month and he spoke about the history of slavery, detailing how slaves had their names taken away from them and were forced to take the names of their masters. He said Black people for too long have been seen as “nameless suspects.”

"Enough is enough. We are no longer going to be your nameless suspects,” Sharpton said, as the crowed applauded.

Earlier in the service, funeral-goers were prompted to “Say his name.” They responded: “Amir Locke."

Locke’s aunt, Linda Tyler, denounced racism in policing and demanded that officers stop talking about the need for more training, and instead start using de-escalation techniques on white and Black people alike.

“If it is something you simply cannot do, we just ask that you resign today instead of resigning another brother or sister to her grave,” she said. She also said she doesn’t want to hear about how policing is a difficult job.

“If you think being a police officer is a difficult profession, try to be a Black man,” she said, as the crowd cheered.

A large portrait of Locke was displayed at the front of the church, with a white casket topped with roses and bouquets of flowers nearby. Minnesota Democratic Gov. Tim Walz and St. Paul Mayor Melvin Carter were among those in attendance.

Locke's death has prompted an outcry against no-knock warrants, with a push by his family and others to ban them in Minnesota and beyond.

Minneapolis Mayor Jacob Frey, who has come under scrutiny for the city’s use of such warrants, and Minneapolis Interim Police Chief Amelia Huffman did not attend. Shiloh Temple Bishop Richard Howell Jr. told the Star Tribune before the service that Frey would not attend without an invitation from the family.

As the service began, hundreds of people sang the hymn “Lift Every Voice and Sing” before Howell led the church in prayer. Members of the Grammy Award-winning group Sounds of Blackness also performed. They later sang their song, “Black Lives Matter.”

Wrapped in a comforter and holding a handgun

The service was held in the same church where Daunte Wright was remembered after he was killed by a suburban Minneapolis police officer in April. Sharpton, while presiding over Wright’s funeral, decried “the stench of police brutality.”

Locke was shot by a SWAT team member shortly before 7 a.m. on Feb. 2 as officers served a no-knock search warrant in a St. Paul homicide case. Body camera video shows at least four officers using a key to quietly enter the downtown apartment where he was staying, then shouting their presence. The video shows Locke, wrapped in a comforter, stirring and holding a handgun right before an officer shot him.

Locke wasn’t named in the warrant and did not live at the apartment. Family members called his killing an “execution,” noting the video shows an officer kicking the sofa, and suggested Locke was startled awake and disoriented. They have also pushed back against police saying Locke was shot after he pointed his gun at officers.

Frey has imposed a moratorium on such warrants while the city reexamines its policy. The state Bureau of Criminal Apprehension is investigating Locke's shooting.

While the funeral was happening, the House Public Safety Committee heard legislation that would significantly limit the use of no-knock warrants.

The bill, authored by Rep. Athena Hollins of St. Paul, only allows such warrants in a handful of exigent circumstances, such as kidnapping and human trafficking. It goes further than measures passed last year, which made it more difficult for officers to seek no-knock warrants.

Last year's legislation requires that applications for no-knock warrants be approved by a chief law enforcement officer and another supervisor. It also requires officers to say whether the warrant can be executed in daytime hours and explain why officers can’t detain a suspect or search a residence by other means.

Several activists who testified in support of the new bill urged lawmakers to pass it, calling last year’s legislation a “watered down” version of what the state needs. When asked if they have spoken with Senate Republicans, they shook their heads “no.”

“They patted themselves on the back and claimed that they had passed some police accountability bills,” civil rights attorney Nekima Levy Armstrong said. “It’s really laughable, it’s an insult to our intelligence and now another Black family has lost their son, their nephew, their cousin, our community member through the nonsensical use of a no-knock warrant.”