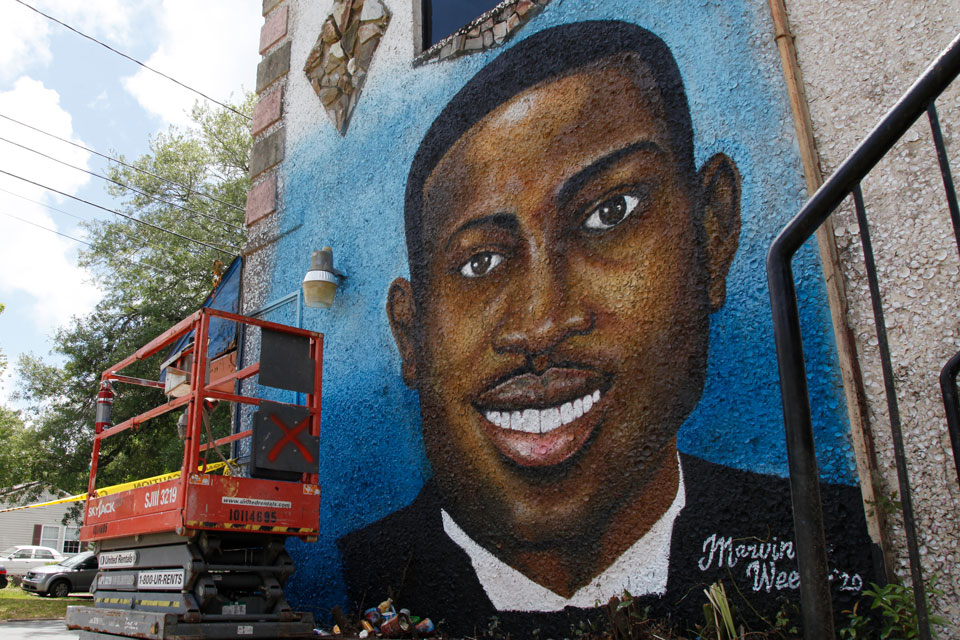 BRUNSWICK, Ga. (AP) — Neighbors of the three white men convicted of murdering Ahmaud Arbery testified at their hate crimes trial Tuesday that they were shocked to hear shotgun blasts ring out in their neighborhood and to see a young man’s body sprawled in the street.

“I felt guilty that it happened outside my house,” said Dan Allcott, who was home with his wife and their baby when Arbery fell dead a few feet from Allcott's driveway on Feb. 23, 2020.

Police found bloodstains and shotgun shells in Allcott's yard. He said he later met Arbery's parents when they came to inspect the scene and let them place a wooden cross with a wreath in his yard. He moved his family to a different neighborhood months afterward.

Father and son Greg and Travis McMichael armed themselves and used a pickup truck to chase Arbery after spotting him running in their coastal Georgia neighborhood that day, a Sunday. A neighbor, William “Roddie” Bryan, joined the chase in his own truck and recorded cellphone video of Travis McMichael shooting Arbery.

No arrests were made until the video leaked online two months later.

Both McMichaels and Bryan were convicted of murder last fall in a Georgia state court and sentenced to life in prison.

All three are now standing trial in a separate case in U.S. District Court, where they are charged with violating Arbery's civil rights and with targeting him because he was Black. They have pleaded not guilty, with defense attorneys saying the deadly chase was motivated by an earnest, though erroneous, suspicion that the 25-year-old Black man had committed crimes — not by racial hostility.

A jury of eight white members, three Black people and one Hispanic person was sworn in Monday to hear the case. The judge in the case on Monday filed a written order requiring the jurors to be sequestered throughout the trial to protect them from “trial publicity, extraneous influences and harassment” and to ensure a fair trial.

On the day of the shooting, another neighbor, Matt Albenze, called police using a nonemergency number when he spotted Arbery entering a home under construction where security cameras had previously recorded Arbery.

Albenze was on the phone with police when Arbery ran from the house toward the home of the McMichaels. Albenze said he saw their truck back out of the driveway as they gave chase.

Pete Theodocion, Bryan's defense attorney, asked Albenze if he still would have called police had the man entering the unfinished home been white or Hispanic.

“Nothing you did that day, none of the words or actions, were based on Mr. Arbery being African American, is that correct?” Theodocion asked.

He said he heard the gunshots minutes later, and rode his bike to the scene of the shooting but kept his distance after seeing the man he'd reported to police lying dead in the road. Albenze said he went home and poured himself a vodka.

Albenze testified that when he grabbed his cellphone to call police he also slipped a handgun into the pocket of his overalls. Asked by prosecutor Bobbi Bernstein if he ever shouted at Arbery to stop, drew his gun or pointed it at Arbery, Albenze said no.

Jurors sat silently as they watched graphic, bloody images from the killing displayed on individual monitors installed at each seat in the jury box.

They saw close-up crime scene photos of Arbery lying dead in the street with gaping wounds in his torso. And jurors viewed three different versions of the cellphone video of Arbery getting shot, including one that was slowed down and another that was zoomed in with the image stabilized.

The jury also saw a clip from the body camera of the first officer on the scene, which showed the McMichaels standing in the road where Arbery lay after being shot. The clip shows Arbery’s head and right leg move. The video was shown without sound, but Georgia Bureau of Investigation agent Richard Dial testified that, if the sound was on, Arbery’s “dying gasps” would be audible.

Dial also walked the jury through excerpts of interviews the McMichaels gave police after the shooting, in which they acknowledged they never saw Arbery commit any crimes. Travis McMichael said the shooting wouldn't have happened had Arbery followed his commands to stop running.

“I'm more pissed off that the guy put me in this situation,” Travis McMichael said in a recorded police interview.