GOP Positions to Grab Left-Leaning Nashville in US House Map 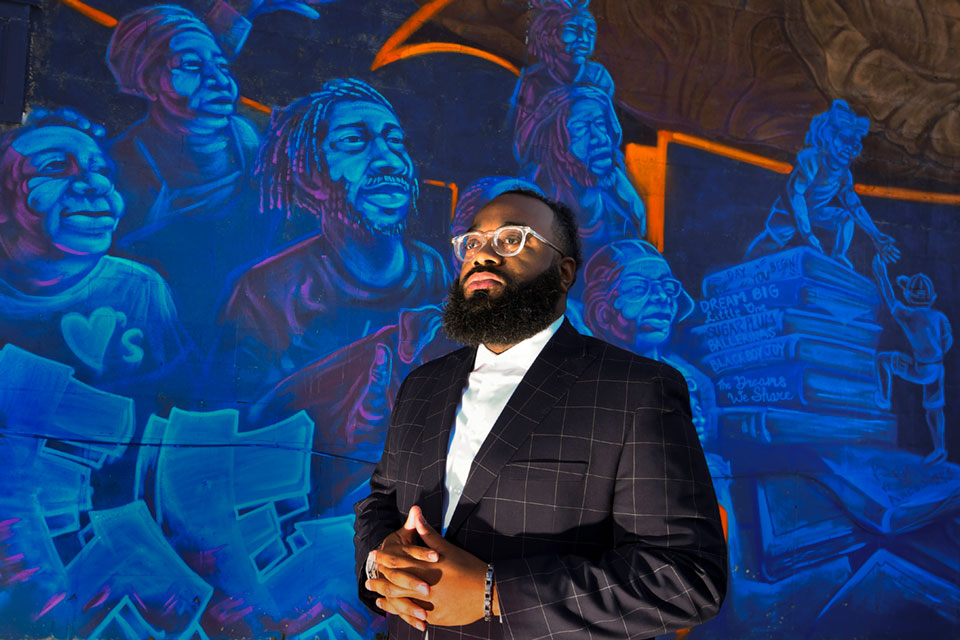 Reality set in for Marble when longtime U.S. Rep. Jim Cooper, a white moderate Democrat, said he wouldn't run again because even he couldn't win any of the three new Nashville seats drawn by Republicans during the once-a-decade redistricting process

The new maps will amount to a stark shift for Nashville, which encompasses Davidson County. As one of three Tennessee counties that backed President Joe Biden in 2020, it's home to the type of coalition of younger progressives, white moderates and African Americans that Democrats have increasingly relied on. 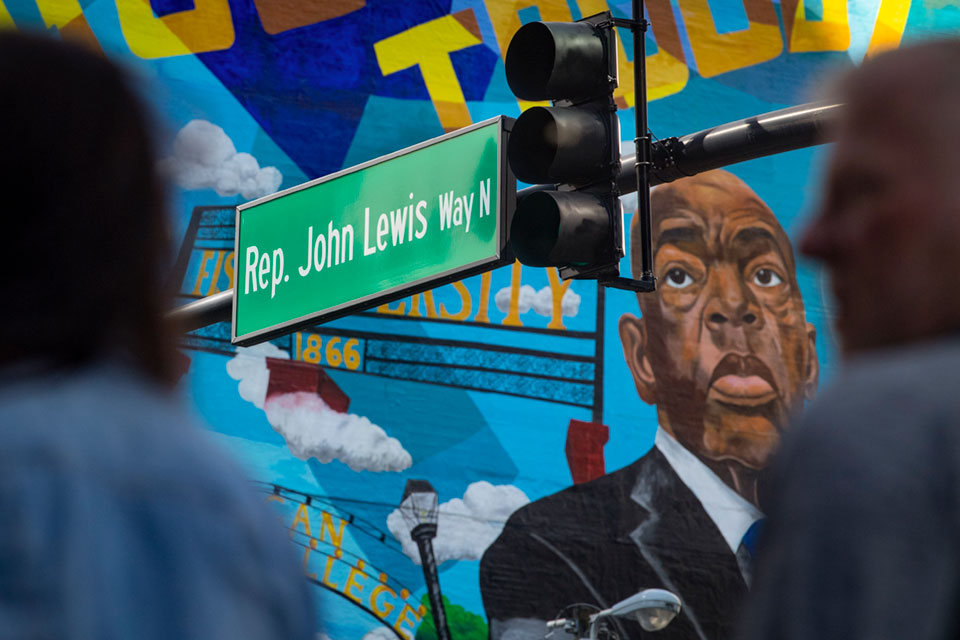 edestrians walk past a mural of Rep. John Lewis on a street named after him, Friday, Feb.11, 2022, in Nashville, Tenn. The late Representative was part of a student movement that once marched downtown from the historically black neighborhood of North Nashville to take part in civil rights lunch counter sit-ins. That same neighborhood now being re-districted into a mostly white congressional district which some democrats are comparing to decades past civil rights violations. (AP Photo/John Amis)

Now, voters there face the potential of representation mostly at odds with their political views, including broad-based support for greater health care access and immigrant rights. There’s particular concern that the new lawmakers will be hostile to protecting voting rights, an issue especially resonant in the city where John Lewis, Diane Nash and other civil rights leaders got their start.

“Black Nashvillians have been feeling the weight of living in a red state for quite some time. But I think this redistricting will have deep and lasting adverse impacts on some of Tennessee’s most vulnerable populations," said Marble, Jefferson Street Missionary Baptist Church’s senior pastor.

The once sleepy Southern city has fueled much of Tennessee's population growth through thriving health care and tech industries. Construction cranes hover over new steel-and-glass structures that sprout up into a Nashville skyline that looks dramatically different from the one Bob Dylan turned into an album title in 1969. The cost of living has skyrocketed.

Navigating that will be a challenge for lawmakers who will also represent rural and suburban communities, where the prevailing politics range from moderate to conservative Republican.

“I think that Nashvillians are going to get more whiplash, culture shock, regret than the residents of almost any city in America, because to go from 100 years of Democratic representation to three varieties of Trump representation is going to be quite a shock,” Cooper said in an interview. 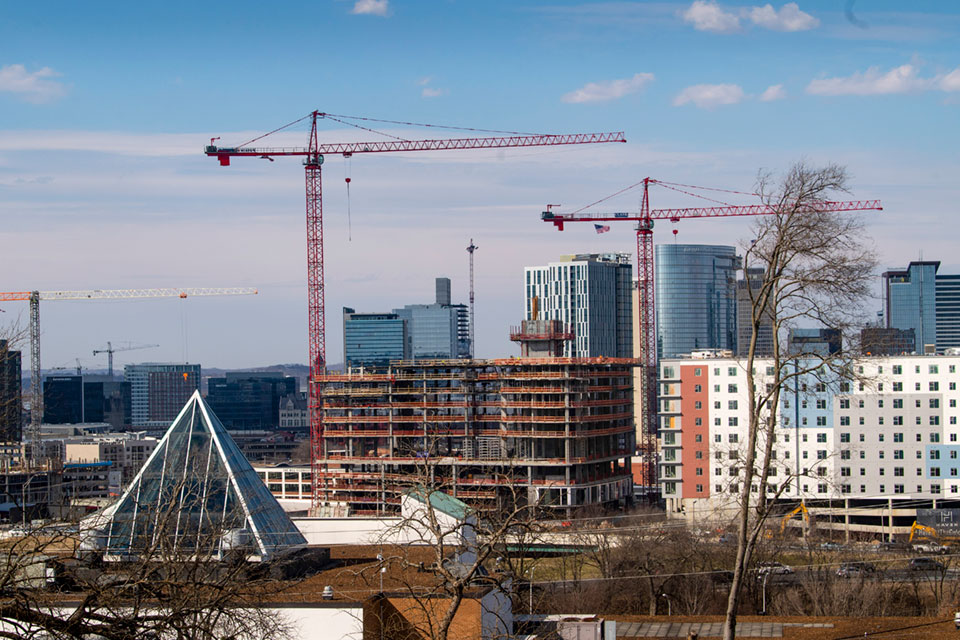 Multiple construction cranes hover over structures rising on the skyline, Friday, Feb.11, 2022, in Nashville, Tenn. Gov. Bill Lee approved a proposal to split the fast growing city into multiple congressional seats, during the once a decade redistricting process, which will combine a historically black community into a mostly white congressional district, a move democrats believe will unfairly affect black voters. (AP Photo/John Amis)

What Tennessee Republicans did in Nashville is a standard gerrymandering technique known as cracking, which dilutes a party's power by spreading its voters among multiple districts. The prototype for this approach last decade was Austin, which Texas Republicans split into six congressional districts.

This cycle, Republicans’ attempts to crack Democratic cities like Charlotte and Cincinnati have run afoul of anti-gerrymandering laws in North Carolina and Ohio, leading the states' supreme courts to reject their maps. Tennessee, however, lacks similar provisions.

The pattern works in Democrats' favor sometimes, too. Portland, Oregon, is divided four ways in the new, Democratic-drawn map to create as many liberal-leaning districts as possible.

This time around, Republicans control the line-drawing process in states representing 187 House seats compared with 75 for Democrats. Others use independent commissions, have split government control or have only one congressional seat.

Additionally, Nashville likely doesn't have enough minority voters to make up a district's majority, a key argument under federal voting rights protections. A recent U.S. Supreme Court ruling in Alabama further dampens Nashville's prospects in court, with justices deciding that elections were too imminent to consider changes to the state's congressional map.

Republican Rep. Mark Green, from the Clarksville area about 50 miles from Nashville, will draw Marble's majority-Black north Nashville neighborhood, plus downtown and elsewhere. In an interview, Green said Democratic policies “are not serving anyone in the state of Tennessee" and “conservative principles are just better.”

He sought to counter criticisms that Republican representation within meandering new districts could short Nashville's needs. It’s unclear which Democrats might seek the Nashville seats.

“What I’ve got to do is get in and listen to people and understand the challenges, and then I’ll put my brain to it,” Green said. "I mean, I’m a smart guy. If I look at the problem and see the problem, I’ll help find a solution to it.” 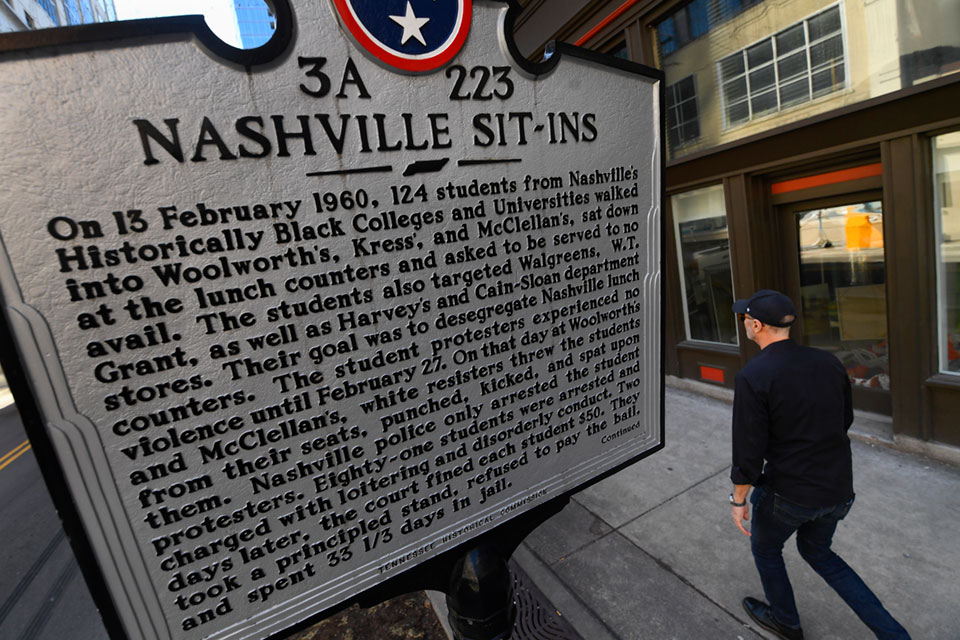 A man walks past a downtown historic marker paying homage to black student sit-ins in 1960, Friday, Feb.11, 2022, in Nashville, Tenn. The protesters marched downtown from the historically black neighborhood of North Nashville which is now being re-districted into a mostly white and rural congressional district which some democrats are comparing to decades past civil rights violations. (AP Photo/John Amis)

The crowded-and-growing field for the recast version of Cooper's seat includes Morgan Ortagus, a Nashville resident and former State Department spokesperson under President Donald Trump, who has endorsed her. Her first video attacks the media, “Sleepy Joe” Biden and “radical socialists.”

“There may be some people that have differing opinions. That’s OK,” Ortagus told The Associated Press. “I want to meet them. I want to knock on their door. I want to talk to them. ... I really think you can have common ground with people.”

Green's and Rose's records, and the rhetoric of those seeking Cooper's seat, make any relationship with Nashville complicated.

Both support Trump's tough tone on immigration, including building out the U.S.-Mexico border wall. They'll represent a growing Nashville immigrant community — it has the nation's largest Kurdish population — and will be asked to help people navigate immigration services.

“I think that the price is going to be much higher for cheap nativist tactics for some of these folks,” she said. "They could rise to the occasion, truly representing a district that is going to be increasingly diverse.”

“We’re fiscally challenged with our debt right now. It’s part of the problem,” Green said. "We just have to be smart about it. But yeah, if there’s an infrastructure need, we go find the money and we build it.”

Cooper, leaning more fiscally conservative than his party, has spent years navigating Nashville's political complexities. A 2022 challenge from the left was awaiting him if the district wasn't severed. He also shifted some policy positions leftward over the years, following his city. He was vocal about the need to shore up voting rights protections.

Cooper predicted that Republicans aren't prepared for what awaits them representing Nashville.

“They’ll pay lip service. They’ll engage in tokenism. They’ll try to put oil on the waters," Cooper said. “But they won’t be able to hide their voting records, current, past or future. And those will not go down well.”