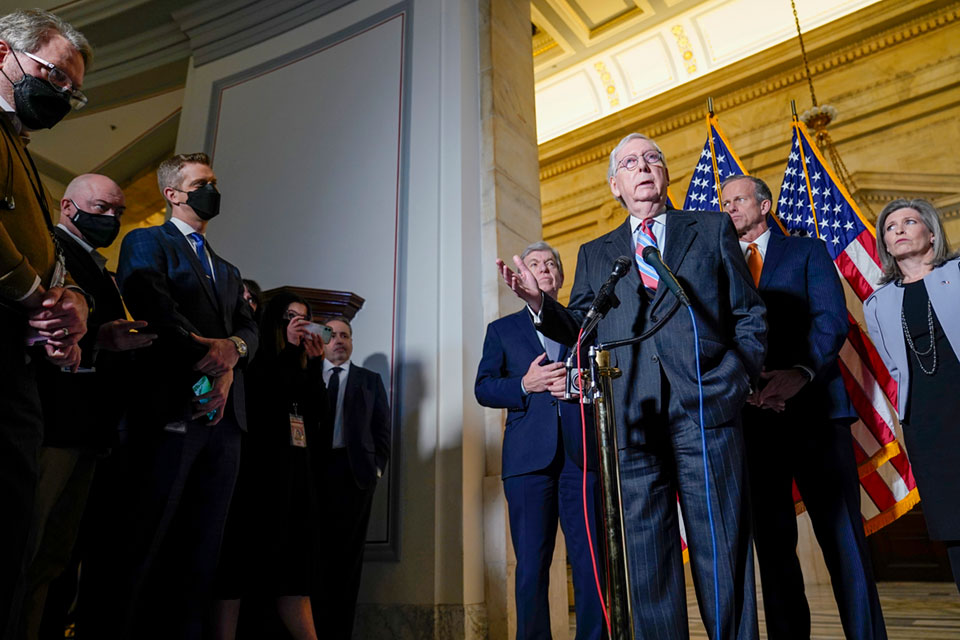 WASHINGTON (AP) — Senate Minority Leader Mitch McConnell is criticizing the Republican National Committee for censuring two House Republicans who are investigating the “violent insurrection” at the Capitol on Jan. 6, 2021, and says it's not the party’s job to police the views of lawmakers.

While Donald Trump has played down the attack by his supporters that was the worst against the Capitol in two centuries, the RNC last week took a voice vote to approve censuring Reps. Liz Cheney of Wyoming and Adam Kinzinger of Illinois at the party’s winter meeting. The Republicans sit on a Democrat-led House committee that is aggressively investigating the riot and has subpoenaed many in the former president’s inner circle.

The RNC resolution accused the committee of leading a “persecution of ordinary citizens engaged in legitimate political discourse” — words that drew outrage from Democrats and firm pushback from several GOP senators. The rioters who broke into the Capitol through windows and doors brutally beat law enforcement officers and interrupted the certification of Joe Biden’s election victory.

“It was a violent insurrection for the purpose of trying to prevent the peaceful transfer of power after a legitimately certified election from one administration to the next,” said McConnell, R-Ky. He said he still has confidence in RNC Chair Ronna McDaniel, but “the issue is whether or not the RNC should be sort of singling out members of our party who may have different views than the majority.

McConnell and others would prefer to talk about issues in this election year such as inflation versus the discourse over the insurrection and Trump’s lies about the 2020 vote.

The rioters were repeating Trump’s false claims of widespread voter fraud and a stolen win, even after election officials and courts across the country repeatedly dismissed those claims. McConnell and his closest allies have said for months that they want to look forward to this November's elections, when they have a chance of taking back the Senate, and not back to what happened in January 2021.

Sen. John Cornyn, R-Texas, said the RNC has said it wants the party to be unified, “and that was not a unifying action.” Sen. Richard Shelby, R-Ala., said he believes the GOP should be a “big tent.” Republican Sens. Lindsey Graham of South Carolina and Mitt Romney of Utah contacted McDaniel to discuss the censure.

Romney, who is McDaniel’s uncle, told reporters that it “could not have been a more inappropriate" message from the party.

“Anything that my party does that comes across as being stupid is not going to help us,” he said.

Sen. Susan Collins, R-Maine, said the rioters who “broke windows and breached the Capitol were not engaged in legitimate political discourse, and to say otherwise is absurd.”

Collins said the GOP started out the year with an advantage on issues that could decide the election, but "every moment that is spent relitigating a lost election or defending those who have been convicted of criminal behavior moves us further away from the goal of victory this fall.”

McDaniel denied that the “legitimate political discourse” wording in the censure resolution was referring to the violent attack on the Capitol. She said it had to do with other actions taken by the House committee investigating the riot. But the resolution drew no such distinction.

Cheney said Monday that she had been receiving a “tremendous amount of support” in the wake of the censure vote. “I think every American who watched the video of that attack and who watched that attack unfold knows that it was really shameful to suggest that that what happened that day might be legitimate political discourse," she said.

McConnell has maintained his criticism of Trump over the insurrection, though he voted to acquit Trump after the House impeached the then-president one week after the attack. In a speech after the Senate vote, McConnell said “there is no question that President Trump is practically and morally responsible for provoking the events of that day,” and that “a mob was assaulting the Capitol in his name. These criminals were carrying his banners, hanging his flags, and screaming their loyalty to him.”

His use of the word “insurrection” — the act of rising up against established authority — is significant. Many in his party have insisted that it was not an insurrection, trying to portray it as a peaceful protest.

Still, the GOP leader doesn't often mention Jan. 6 and did not participate in remembrance ceremonies on the anniversary of the attack last month. Last summer, he rallied his conference to vote against a bipartisan commission that would have independently investigated the siege, emphasizing to GOP colleagues that they should focus on the future and issues that will help them win back the Senate.

Similarly, former Vice President Mike Pence has mostly avoided talking about the insurrection, even though he was in the building as it happened and some rioters were calling for his death. But on Friday, he addressed Trump's repeated criticism that he could have “overturned” the election in his ceremonial role overseeing the electoral count.

“President Trump is wrong,” Pence said to a gathering of the conservative Federalist Society. “I had no right to overturn the election.”

While few Republicans openly defended the RNC’s move, several said it was the party’s prerogative to take the vote.

“The RNC has any right to take any action and the position that I have is that you’re ultimately held accountable to voters in your district,” said New York Rep. Elise Stefanik, the No. 3 Republican in the House. “We’re going to hear the feedback and the views of voters pretty quickly here this year.”

Texas Sen. Ted Cruz said Cheney and Kinzinger’s role on the House committee is “not helpful.” Sen. Josh Hawley, R-Mo., who along with Cruz led objections to the certification of Biden’s victory on Jan. 6, 2021, said it is a distraction to have Republicans in Washington like McConnell “bashing other Republicans.”

“If you come to the state of Missouri and talk to Republicans, people who are going to be voting in our primary, they probably agree with what the RNC did,” Hawley said.

Trump issued a statement on Wednesday saying that that McConnell “does not speak for the Republican Party.”

As Republicans fought among themselves, Democrats piled on. House Speaker Nancy Pelosi, D-Calif., said Wednesday that the GOP “cannot hide” from what happened on Jan. 6.

“They seem to have reached rock bottom” with the censure resolution, she said.