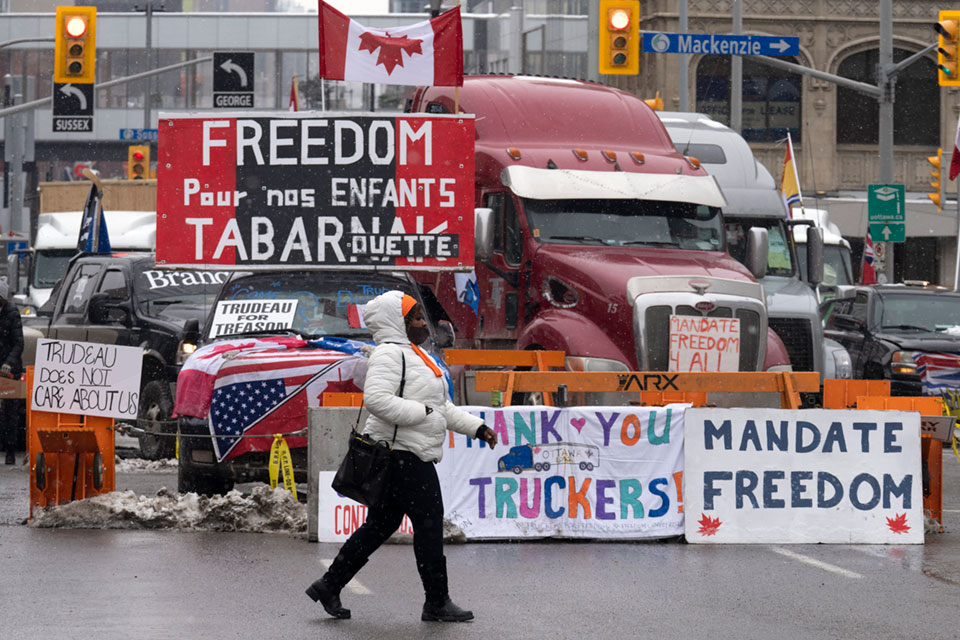 The blockade at the Ambassador Bridge between Detroit and Windsor, Ontario, prevented traffic from entering Canada while some U.S.-bound traffic was still moving, Public Safety Minister Marco Mendicino said, calling the bridge “one of the most important border crossings in the world." It carries 25% of all trade between Canada and the United States.

Canadian Transport Minister Omar Alghabra said such blockades will have serious implications on the economy and supply chains. “I've already heard from automakers and food grocers."

"This is really a serious cause for concern,"

he said in Ottawa, the capital.

Added Mendicino: “Most Canadians understand there is a difference between being tired and fatigued with the pandemic and crossing into some other universe.”

Speaking in an emergency debate late Monday in Parliament, Prime Minister Justin Trudeau said the protesters are “trying to blockade our economy, our democracy.”

The daily demonstrations staged by the so-called Freedom Truck Convoy are centered in Ottawa, where demonstrators have used hundreds of parked trucks to paralyze parts of the capital for more than 10 days.

Ottawa’s city manager said all tow-truck companies on contract with the city have refused to haul away the big rigs. The protests have infuriated people who live around downtown, including neighborhoods near Parliament Hill, the seat of the federal government. 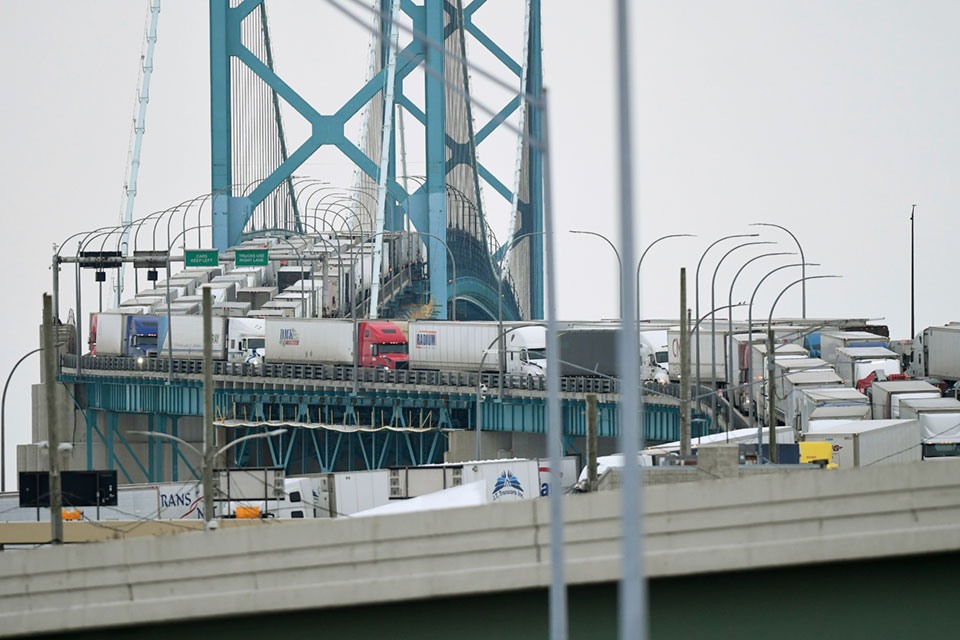 Trucks are backed up heading to and from Canada on the Ambassador Bridge, due to protests on the Windsor side, in Detroit on Monday, Feb. 7, 2022. Canada's public safety minister said Monday that U.S. officials should stay out of his country's domestic affairs, joining other Canadian leaders in pushing back against prominent Republicans who offered support for the protests of COVID-19 restrictions that have besieged downtown Ottawa for more than a week. (Daniel Mears /Detroit News via AP)

Dave Weatherall, a federal civil servant, lives near the truckers’ prime staging area in a city-owned parking lot outside of the downtown core. “They’re using the lot to terrorize people in Centretown,” he said, asking why the city has allowed the convoy to remain parked on its property for free and without intervention.

“It’s the first time since having kids that I’ve seriously wondered about the world we brought them into. I always figured they could handle most things the world will throw at them, but this feels different," he said.

Demonstrations have spread to locations on or near the Canadian border, including the Ambassador Bridge, where a protest caused long backups and at one point stopped traffic in both directions. The bridge remains blocked on the road to Canada.

At a news conference after Trudeau spoke, trucker spokesman Tom Marrazo reiterated that the protesters want to overthrow the government. Marrazo said he is willing to meet with the opposition parties and the nation's governor general, the representative of Britain’s Queen Elizabeth II as head of state.

All three opposition parties technically could join together and defeat the government because Trudeau does not have the majority of seats in Parliament, but that is highly unlikely because lawmakers from the opposition New Democrats and the Bloc Quebecois have condemned the protests.

“The border at Coutts continues to open and close at the discretion of a group of protesters who believe they are above the law. It has to stop,” tweeted Rachel Notley, Alberta’s former premier and current opposition New Democrat leader.

Protesters have said they will not leave until all vaccine mandates and COVID-19 restrictions are lifted. They also called for the removal of Trudeau’s government, though it is responsible for few of the restrictive measures, most of which were put in place by provincial governments.

François Laporte, the president of Teamsters Canada, which represents over 55,000 drivers, including 15,000 long-haul truck drivers, said the protests do not represent the industry in which 90% of drivers are vaccinated.

"The Freedom Convoy "and the despicable display of hate led by the political Right and shamefully encouraged by elected conservative politicians does not reflect the values of Teamsters Canada, nor the vast majority of our members, and in fact has served to de-legitimize the real concerns of most truck drivers today,” Laporte said in a statement.

“Vaccination at TFI is not an issue at all," he said. The company's few unvaccinated drivers are kept in Canada.

Joel Lightbound, a lawmaker for Trudeau’s Liberal Party, rebuked his leader Tuesday for dividing Canadians and said his government needs to create a road map for when coronavirus measures should be lifted.

“It is time we stopped dividing people, to stop pitting one part of the population against each other,” Lightbound said. 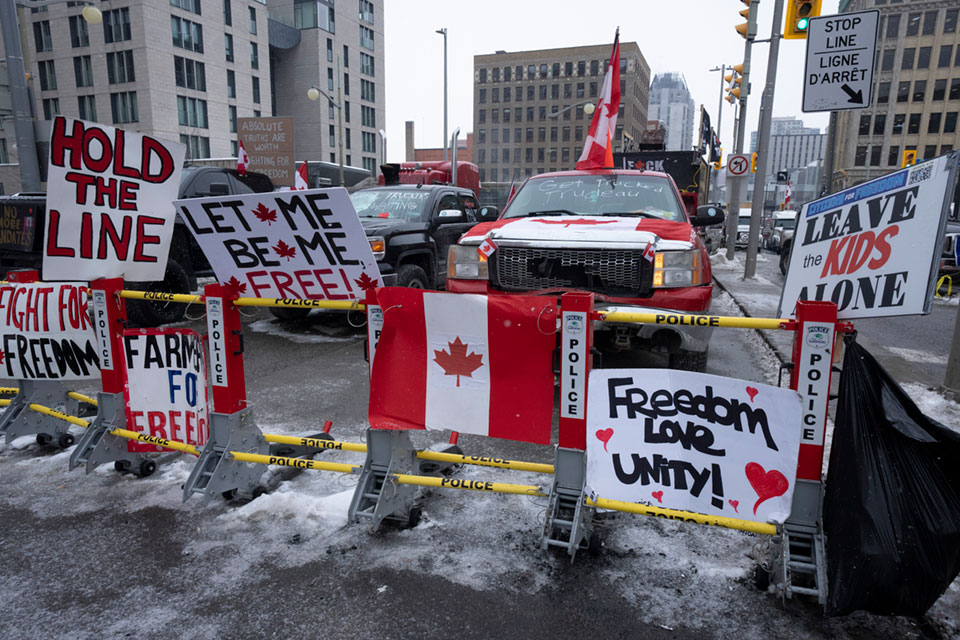 Signs sit on a barricade in front of parked vehicles as part of the trucker protest, Tuesday, Feb. 8, 2022 in Ottawa's downtown core. Canadian lawmakers expressed increasing worry about protests over vaccine mandates other other COVID restrictions after the busiest border crossing between the U.S. and Canada became partially blocked. (Adrian Wyld /The Canadian Press via AP)

Trudeau continues to take a hard line against the protesters. The prime minister said everyone is tired of COVID-19, and that the restrictions will not last forever. He noted that Canada has one of the highest vaccination rates in the world.

“This government has been focused every step of the way on following the best science, the best public health advice, to keep as many people as safe as possible. Frankly, it’s worked," Trudeau said Tuesday.

“I can understand frustrations with mandates,” he added. "But mandates are the way to avoid further restrictions.”

Meanwhile, the Canadian province of Saskatchewan became the first in the country to announce a plan to lift all COVID-19 restrictions. Saskatchewan officials said they will no longer require COVID-19 vaccine passports starting Monday. The province with a population of almost 1.2 million people is also ending its indoor mask mandate at the end of the month.

Saskatchewan Premier Scott Moe, a Conservative, said the benefits of providing proof of vaccination to enter businesses such as restaurants no longer outweigh the cost. He said the passport has created deep divisions.

In Alberta, another Conservative stronghold, the premier planned later Tuesday to announce a plan "to lift damaging restrictions if pressure on our hospitals continues to decline.”

The Quebec government said most COVID-19 restrictions would be lifted across the province by March 14, except for mask mandates and the vaccine passport system.