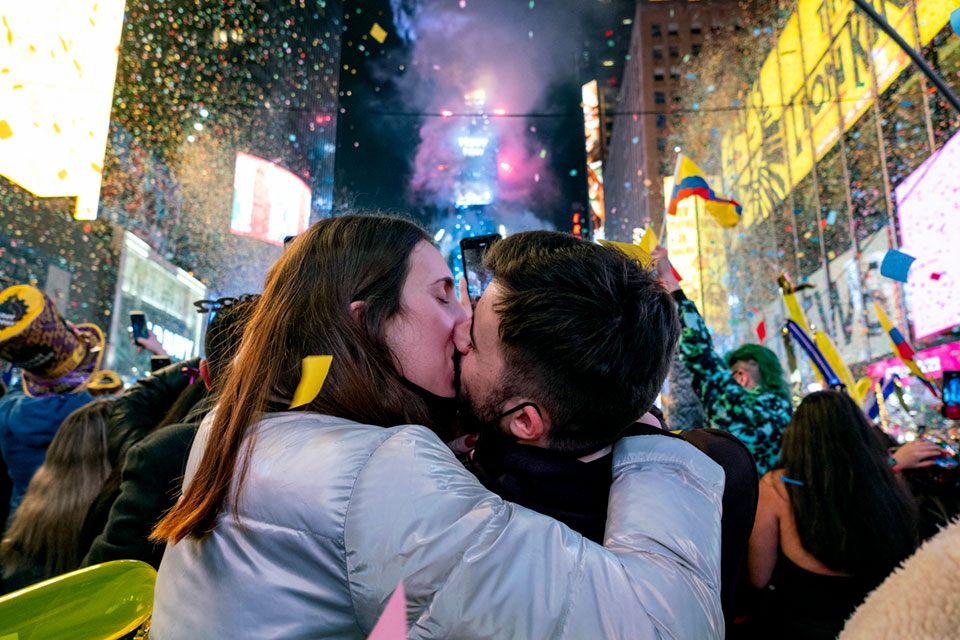 NEW YORK (AP) — New York City welcomed the new year — and bid good riddance to 2021 — as confetti and cheers spread across Times Square as a New Year's Eve tradition returned to a city beleaguered by a global pandemic.

The new year marched across the globe, time zone by time zone, and thousands of New Year's revelers stood shoulder to shoulder in a slight chill to witness a 6-ton ball, encrusted with nearly 2,700 Waterford crystals, descend above a crowd of about 15,000 in-person spectators — far fewer than the many tens of thousands of revelers who usually descend on the world-famous square to bask in the lights and hoopla of the nation’s marquee New Year’s Eve event.

It did so as an uneasy nation tried to muster optimism that the worst days of the pandemic are now behind it — even as public health officials cautioned Friday against unbridled celebrations amid surging COVID-19 infections from the omicron variant.

Last year’s ball drop was closed to the public because of the pandemic.

As the ball dropped and euphoria filled the streets, Maya Scharm, a dog trainer visiting from New Jersey, felt 2021 slide away.

“It's symbolic of getting back to normal,” she said, just minutes after the stroke of midnight.

“Hopefully it's different this year,” said her companion, Brandon Allen. “We already have that sense of stability. We know what’s going on — there’s a new strain going around now — but it’s like we’ve kind of been through it for two years at this point.” 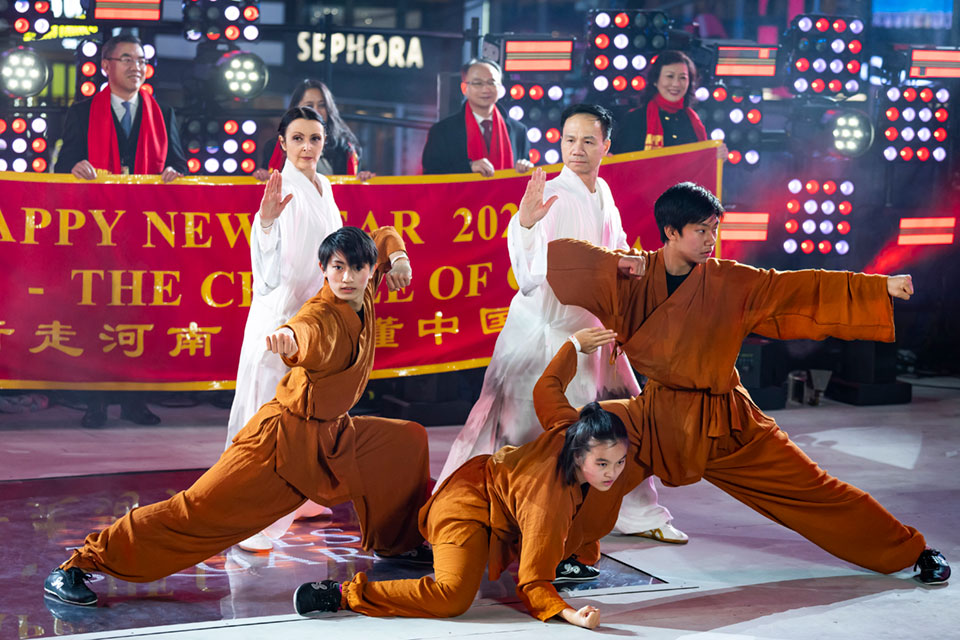 Though the crowds were smaller, the throngs nevertheless stretched for blocks to soak in the celebration, with many traveling from afar to take part. Confetti lit up by electronic billboards swirled in a light wind on a mild winter night in New York City.

Mary Gonzalez stood a few feet behind a crowd, wanting to keep her distance from anyone unwittingly carrying the virus.

“I’m happy that 2021 is over because it caused a lot of problems for everybody,” said Gonzalez, who was visiting from Mexico City and wanted to take in an American tradition. “We hope that 2022 is much better than this year.”

The annual ball drop took place as the clock ticked into midnight and ushered in the new year, an occasion usually commemorated with the uncorking of Champagne, clinking of pints, joyous embraces and renewed hope for better times ahead. 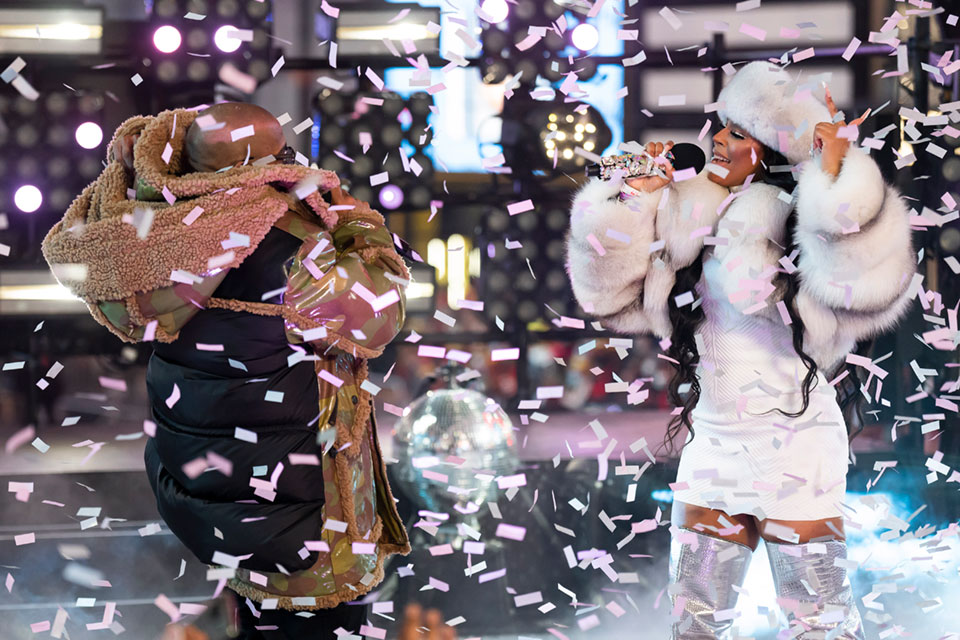 Times Square is often referred to as the crossroads of the world, and city officials insisted on holding the marquee New Year’s Eve event to demonstrate the city's resiliency even amid a resurgence of the coronavirus.

But 2022 begins just as the year prior began — with the pandemic clouding an already uncertain future.

Doubts swirled about whether the city would have to cancel this year’s bash, as the city posted record numbers of COVID-19 cases in the days leading to it, even as some cities like Atlanta had decided to cancel their own celebrations. 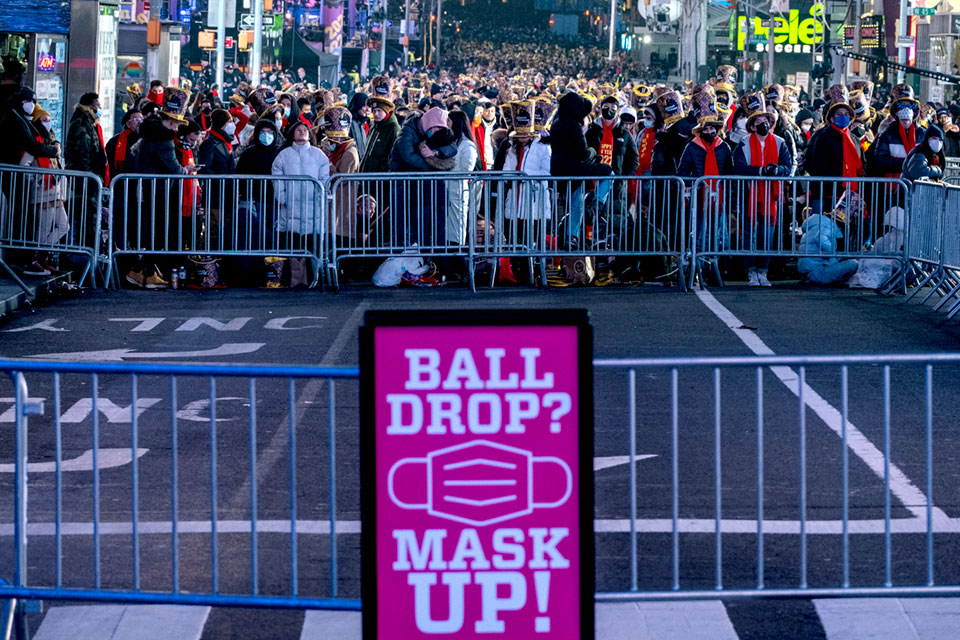 COVID-19 cases in the U.S. have soared to their highest levels on record at over 265,000 per day on average. New York City reported a record number of new, confirmed cases — nearly 44,000 — on Wednesday and a similar number Thursday, according to New York state figures.

Officials required those attending the spectacle would have to wear masks and show proof of vaccination. Organizers had initially hoped that more than 50,000 revelers would be able to join in, but plans were dramatically scaled back because of widespread infections.

Rap artist and actor LL Cool J was supposed to be among the performers taking the stage in Times Square on Friday night, but announced he would pull out of the event because he had tested positive for COVID-19.

But Mayor Bill de Blasio, who relinquished oversight of the nation's most populous city at the stroke of midnight, said the festivities at Times Square would “show the world that New York City is fighting our way through this.”

New York City’s incoming mayor, Eric Adams, took his oath in Times Square soon after the ball drop. He made a brief appearance earlier on the main stage to affirm the city's resiliency.

“It’s just great when New York shows the entire country how we come back,” he said. “We showed the entire globe what we’re made of. We’re unbelievable. This is an unbelievable city and, trust me, we’re ready for a major comeback because this is New York.” 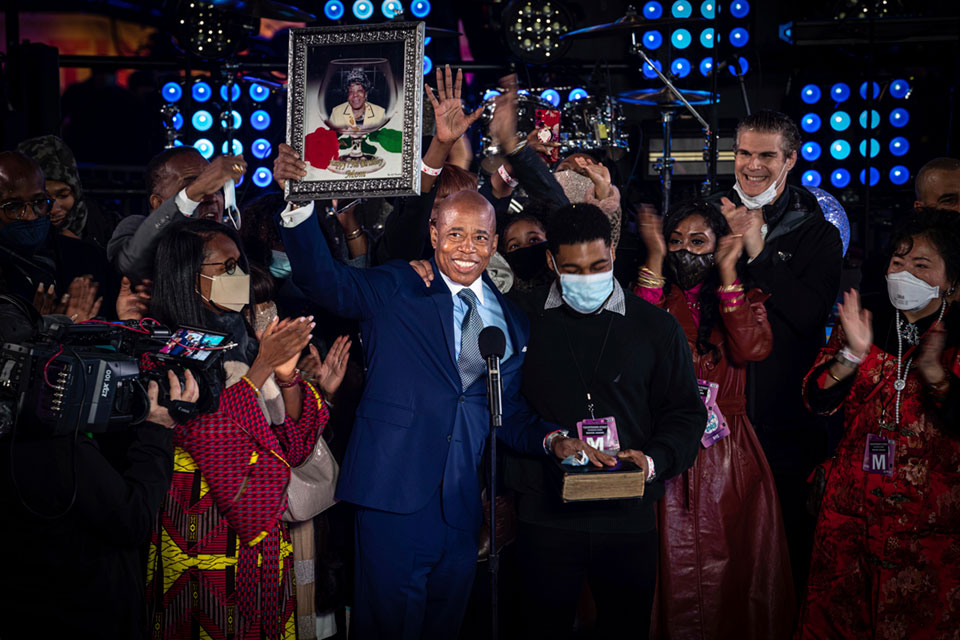 Eric Adams is sworn in as mayor of New York City on the stage of the New Year’s Eve celebration in New York’s Times Square on Saturday, Jan. 1, 2022. (AP Photo/Robert Bumsted)

That hopeful sentiment was shared by ordinary people.

“I look back and I see it as a sort of a stressful year, but it wasn’t a terrible year,” said Lynn Cafarchio, who braved the crowds to attend the festivities with her husband Pete.

A New York City tour guide, she was unemployed for a spell as the economy was shuttered and tourism tanked.

“We're standing here glad that 2021 will soon be over,” she said, "but really positive about next year.”

Even if the crowds were considerably smaller, people gathered across block after block to witness the ball drop.

Nursing student Ashley Ochoa and her boyfriend, Jose Avelar, traveled from the central valley of California specifically to be at Times Square.

“COVID did hold a lot of stuff back for me," Ochoa said, “but I mean, I’m here today, so that’s what I'm thankful for.”