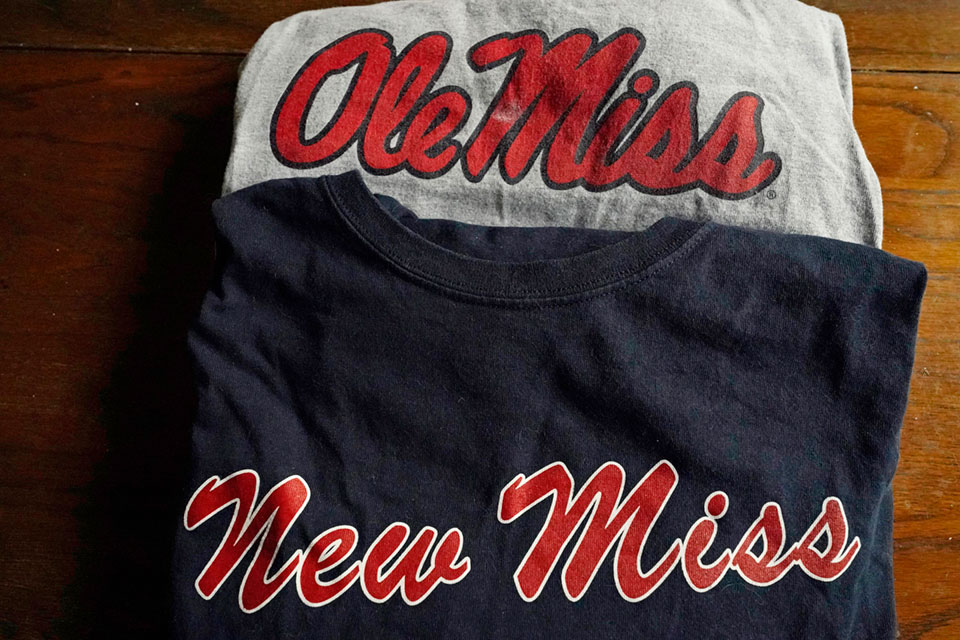 JACKSON, Miss. (AP) — James Meredith says he conquered white supremacy and created a new Mississippi 59 years ago when he became the first Black student to enroll in the University of Mississippi — a school whose longstanding nickname, Ole Miss, is rooted in plantation vernacular of the Confederacy.

Now, a person close to Meredith is selling “New Miss” merchandise and trying to trademark a logo with cursive script that is nearly identical to the university's Ole Miss logo. The university is fighting the trademark effort, arguing that the New Miss merchandise is “confusingly similar” to its ubiquitous brand.

Suzi Altman is a photographer who often follows Meredith to document his public appearances. She applied for the New Miss trademark in July 2020, soon after she sold the first T-shirts and other merchandise. Altman said she’s using the brand to try to raise money for a museum that would preserve Meredith’s legacy — a project that still has a long way to go. She said that as of mid-November, she still had not earned a profit on the merchandise.

Meredith was already a military veteran when he integrated the University of Mississippi in 1962 under a federal court order and amid resistance from a race-baiting governor. Federal marshals protected him as mob violence erupted under the oaks and magnolias on the Oxford campus.

A few years ago, one of his friends gave Meredith a baseball cap emblazoned with a logo that looked like the Ole Miss one but said “New Miss." That friend, the Rev. Robert West, said the phrase more accurately symbolized how Meredith had changed a state with a tarnished legacy of slavery and segregation.

“We were inspired by James’ story,” Altman told The Associated Press during a conversation about why she started selling New Miss items. 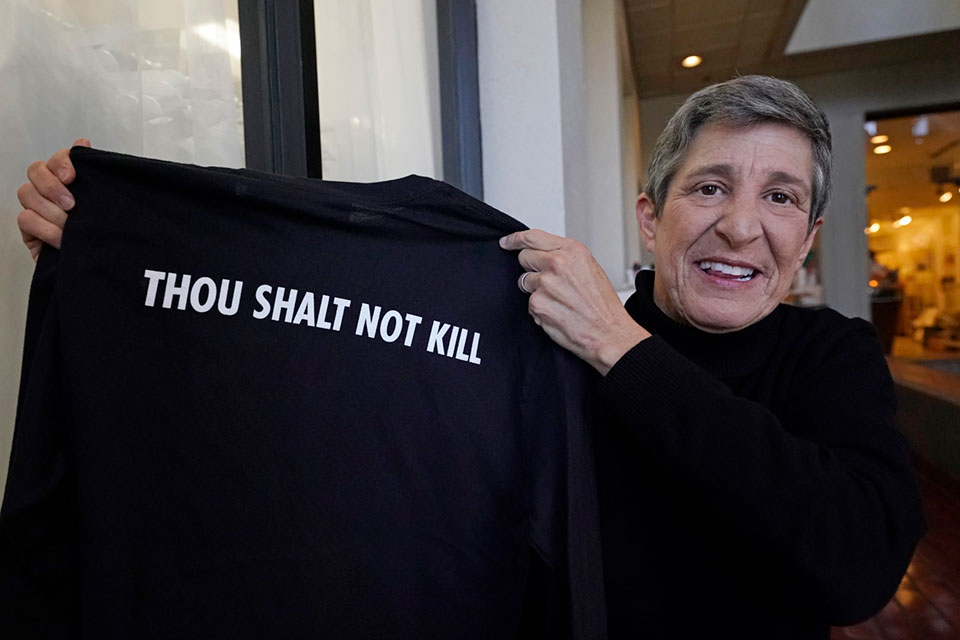 Suzi Altman holds a "New Miss" shirt, Nov. 23, 2021, in Jackson, Miss. The shirt and hats she produces, uses the same the cursive script as the Ole Miss logo that appears on football helmets, sports jerseys, marketing materials and all manner of bags, clothing and other merchandise licensed by the University of Mississippi. Altman applied for the New Miss trademark in July 2020, but the school has filed papers trying to block her from trademarking the "New Miss" logo. (AP Photo/Rogelio V. Solis)

Altman's New Miss T-shirts, hats and flags use the same script as the Ole Miss logo that appears on football helmets, sports jerseys, marketing materials and all manner of merchandise licensed by the University of Mississippi. Many of her products also use the same colors as the university's: cardinal red, navy blue and powder blue.

Altman uses photos of Meredith on her New Miss Brand website. The backs of some baseball caps are embroidered with "James H. Meredith 1962.”

The 88-year-old Meredith himself was elusive when asked whether he has given his blessing to Altman's business venture.

“I'm glad somebody wants to do something,” he told the AP, before adding, “Everybody done made money on James Meredith except James Meredith.”

Meredith is touring Mississippi on what he calls his last mission from God, urging people to abide by the Ten Commandments. Some days, he wears an Ole Miss baseball cap. Other days, he swaps that for one with a New Miss logo.

“I don’t see no reason why the Ole Miss and the New Miss can’t coexist,” Meredith said.

The university doesn't see it that way. In a development first reported by the Clarion Ledger, the university said in its objection to Altman's trademark application that the New Miss items “are identical in some instances and confusingly similar in all instances” to Ole Miss merchandise.

The university declined to make anyone available for an interview with the AP but said in a statement that it had tried unsuccessfully to resolve the issue with Altman.

“The University of Mississippi is affectionately known by our students, alumni and others across the country as Ole Miss, and identifies the university with the script Ole Miss logo,” said the university’s communications officer, Jim Zook. “The University has an obligation to protect its brand against confusingly similar marks.”

The university says the Ole Miss nickname arose from a university yearbook contest in the late 1800s. The phrase “Ole Miss” had been used by enslaved people to refer to a plantation owner’s wife.

The university's chancellor issued a report in 2014 on efforts to promote diversity on the mostly white campus in the state with the nation’s highest percentage of Black residents. It said the university would continue calling itself Ole Miss but should consider limiting the nickname to the context of athletics and school spirit. 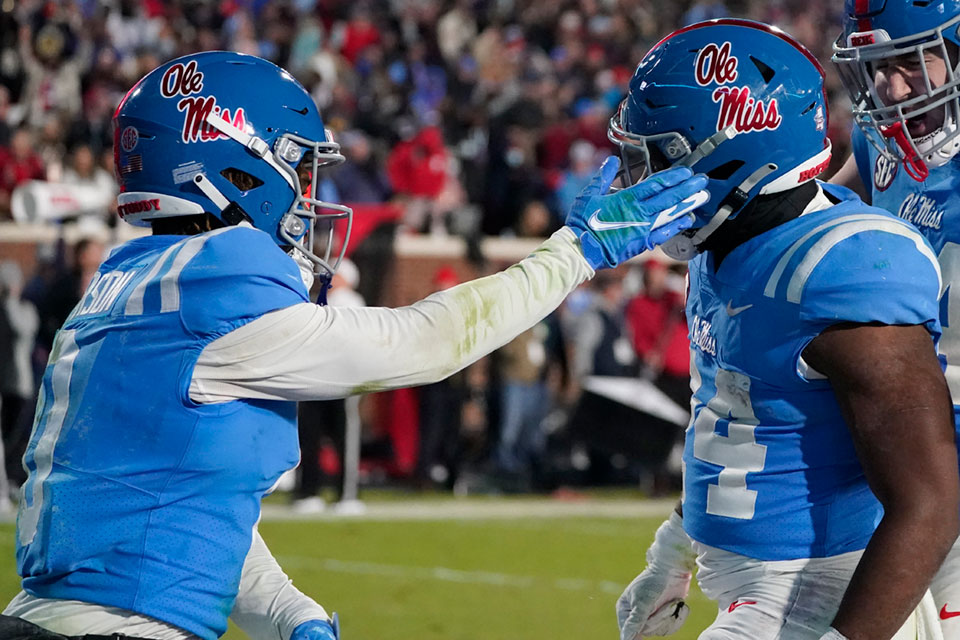 “Regardless of its origin, the vast majority of those associated with our university (have) a strong affection for ‘Ole Miss’ and do not associate its use with race in any way,” the 2014 report said.

The university still uses Ole Miss for websites and email addresses, although some students and faculty object. The most popular people on campus, chosen in a student election, are Mr. and Miss Ole Miss.

Dee Rhymes, a 2021 University of Mississippi graduate, ran for Mr. Ole Miss in the fall of 2020 promising “Truth, Justice and the New Miss Way.” Rhymes, who is Black, didn’t win but said he wanted to inspire fellow students to think about a campus culture that could feel more equitable and compassionate. Altman has given him New Miss merchandise and he volunteers as a brand ambassador.

Rhymes said embracing New Miss over Ole Miss should not be controversial.

“New Miss is simply a new Mississippi or a new way of thinking — out with the old, in with the new,” he said. 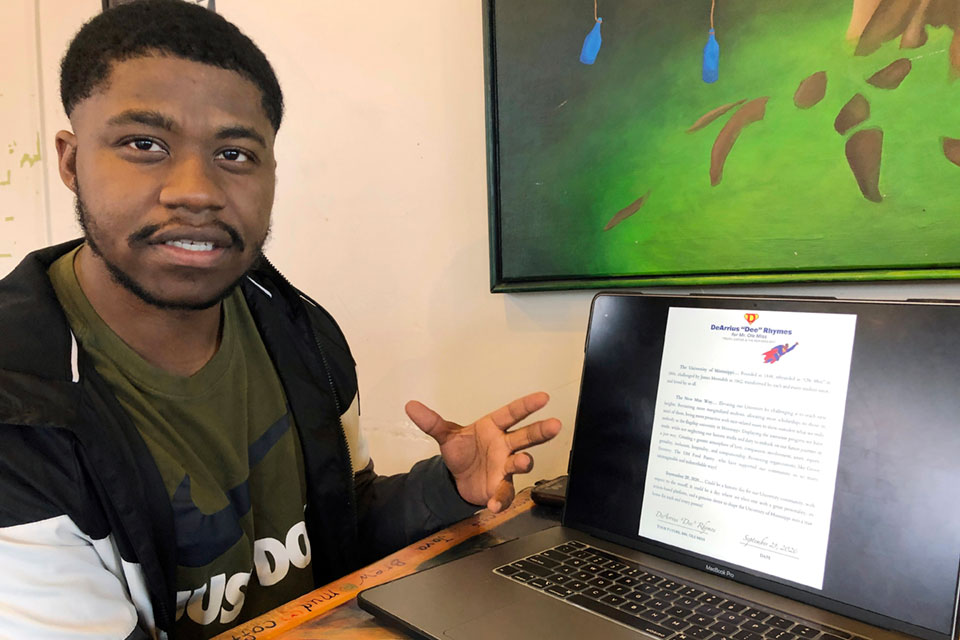 Dee Rhymes speaks Monday, Nov. 15, 2021, in Jackson, Miss., about running for a campus position in 2020 at the University of Mississippi with a focus on recreating the university's image as "New Miss" rather than Ole Miss. Rhymes, a 2021 graduate of the university, said he wants a new Mississippi that focuses on equity and compassion. (AP Photo/Emily Wagster Pettus)

Altman said she has “no personal animosity” toward the university or the nickname Ole Miss.

“I don’t care if they change their name. That’s not my fight,” she said. "We are all about a new Mississippi and changes that cut across the state.”

The University of Mississippi has worked to distance itself from Confederate imagery during the past generation.

In 1997, the university effectively stopped sports fans from bringing Confederate battle flags to games. Sports teams are still called the Rebels, but in 2003 the university retired the Col. Reb sideline mascot. During the AP interview, Meredith wore shoes with a Col. Reb logo, saying he had conquered the colonel and could wear it if he wanted. 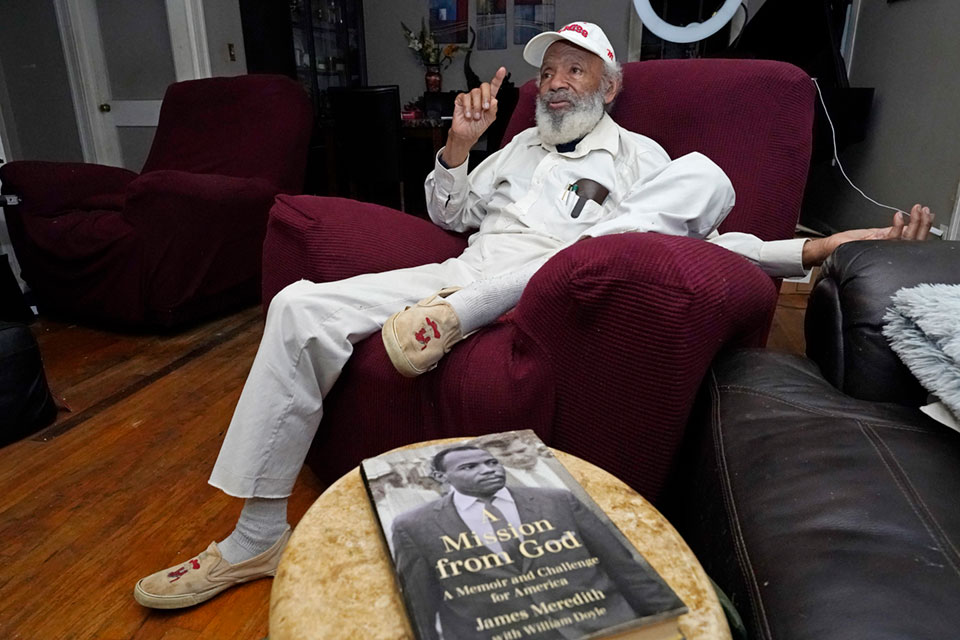 James Meredith, who integrated the University of Mississippi as its first Black student in 1962, reflects on his efforts to dismantle white supremacy and his mission to promote religious revival, at his home in Jackson, Miss., Thursday, Oct. 28, 2021. A person close to Meredith is selling “New Miss” merchandise and trying to trademark a logo with cursive script that is nearly identical to the university's Ole Miss logo. The university is fighting the trademark effort. (AP Photo/Rogelio V. Solis)

In 2006, the university dedicated a statue of Meredith on campus and in 2020, the school moved a Confederate soldier monument that had stood for more than a century in a central part of campus to somewhere more remote. The monument had been a rallying point for rioters when Meredith enrolled.

Meredith now has two grandchildren at the University of Mississippi. He said one of his most rewarding moments on the Oxford campus happened about a dozen years ago, when he saw young Black sorority pledges “marching across Ole Miss like they own the place.”

“To me, that was the new Ole Miss,” Meredith said with a smile.