Fighting Gas Prices, US to Release 50 Million Barrels of Oil 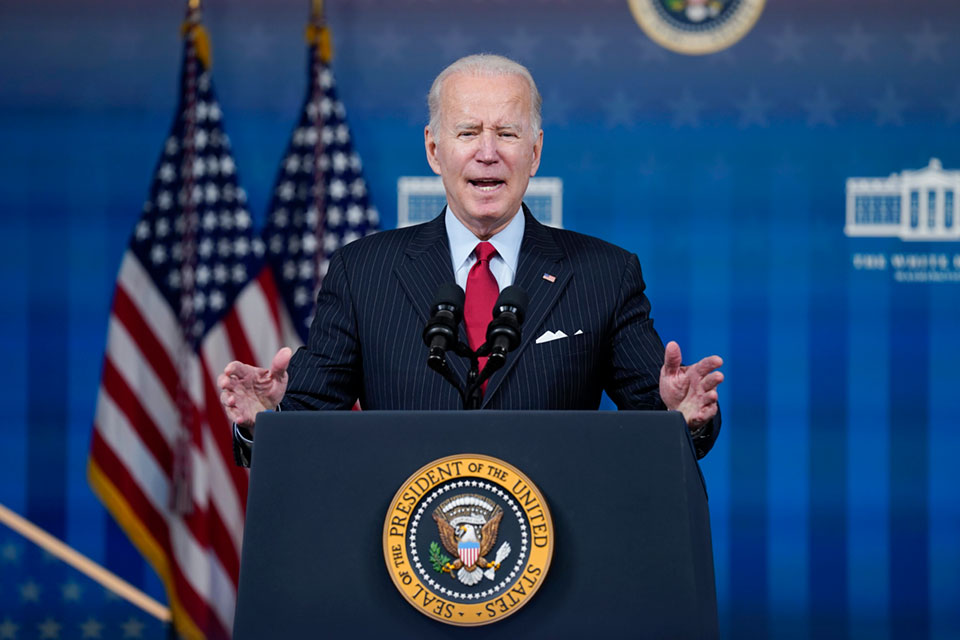 WASHINGTON (AP) — President Joe Biden on Tuesday ordered a record 50 million barrels of oil released from America's strategic reserve, aiming to bring down gasoline and other costs, in coordination with other major energy consuming nations including India, the United Kingdom and China.

The U.S. action is focused on helping Americans coping with higher fuel and other prices ahead of Thanksgiving and winter holiday travel. Gasoline prices are at about $3.40 a gallon, more than 50% higher than a year ago, according to the American Automobile Association.

“While our combined actions will not solve the problems of high gas prices overnight, it will make a difference,” Biden promised in remarks at the White House. "It will take time, but before long you should see the price of gas drop where you fill up your tank.”

The government will begin to move barrels into the market in mid- to late-December. Gasoline usually responds at a lag to changes in oil prices, and administration officials suggested this is one of several steps toward ultimately bringing down costs. 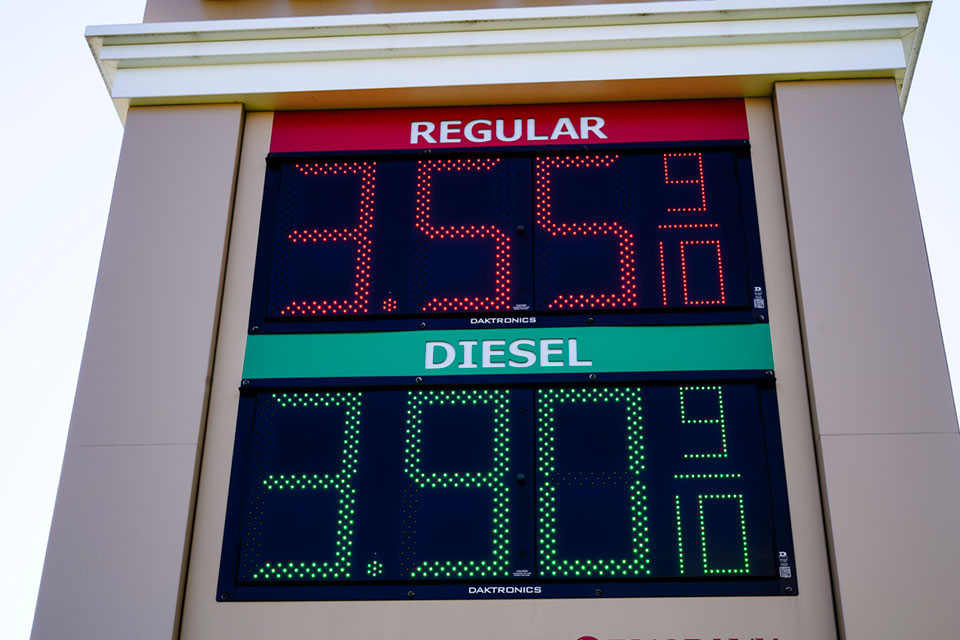 A motorist fills up at a Shell station on Monday, Nov. 22, 2021, in San Francisco, where regular unleaded gasoline was selling for $5.85 per gallon. President Joe Biden on Tuesday, Nov. 23, 2021, ordered 50 million barrels of oil released from America's strategic reserve to help bring down energy costs, in coordination with other major energy consuming nations, including India, the United Kingdom and China. (AP Photo/Noah Berger)

Oil prices had dropped in the days ahead of the announced withdrawals, a sign that investors were anticipating the moves that could bring a combined 70 million to 80 million barrels of oil onto global markets. But in trading after the announcement, prices shot up roughly 2% instead of falling.

The market was expecting the news, and traders may have been underwhelmed when they saw the details, said Claudio Galimberti, senior vice president for oil markets at Rystad Energy.

“The problem is that everybody knows that this measure is temporary,” Galimberti said. “So once it is stopped, then if demand continues to be above supply like it is right now, then you’re back to square one.”

British Prime Minister Boris Johnson’s spokesman, Max Blain, said it was “a sensible and measured step to support global markets” during the pandemic recovery. Blain added that the country's companies will be authorized but not compelled to participate in the release.

Despite all the optimistic statements, the actions by the U.S. and others risk counter moves by Gulf nations, especially Saudi Arabia, and by Russia. Saudi Arabia and other Gulf countries have made clear they intend to control supply to keep prices high for the time being. 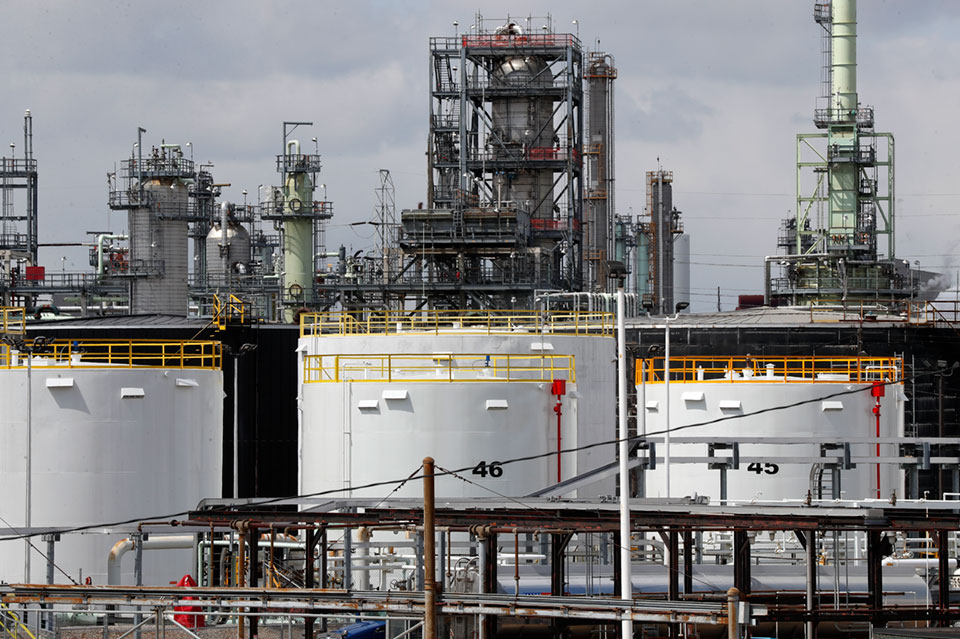 FILE - Storage tanks are shown at a refinery in Detroit, Tuesday, April 21, 2020. The White House on Tuesday said it had ordered 50 million barrels of oil released from strategic reserve to bring down energy costs. (AP Photo/Paul Sancya, File)

As word spread in recent days of a coming joint release from U.S. and other countries’ reserves, there were warnings from OPEC interests that those countries may respond in turn, reneging on promises to increase supplies in coming months.

Wyoming Sen. John Barrasso was among Republicans who criticized Biden's announcement. The No. 3 Senate Republican said the underlying issue is restrictions on domestic production by the administration.

Biden has scrambled to reshape much of his economic agenda around the issue of inflation, saying that his recently passed $1 trillion infrastructure package will reduce price pressures by making it more efficient and cheaper to transport goods.

Republican lawmakers have hammered the administration for inflation hitting a 31-year high in October. The consumer price index has soared 6.2% from a year ago — the biggest 12-month jump since 1990.

The Strategic Petroleum Reserve is an emergency stockpile to preserve access to oil in case of natural disasters, national security issues and other events. Maintained by the Energy Department, the reserves are stored in caverns created in salt domes along the Texas and Louisiana Gulf Coasts. There are roughly 605 million barrels of petroleum in the reserve.

The Biden administration argues that it is the right tool to help ease the supply problem. Americans used an average of 20.7 million barrels a day during September, according to the Energy Information Administration. That means that the release equals about two-and-a-half days of additional supply. 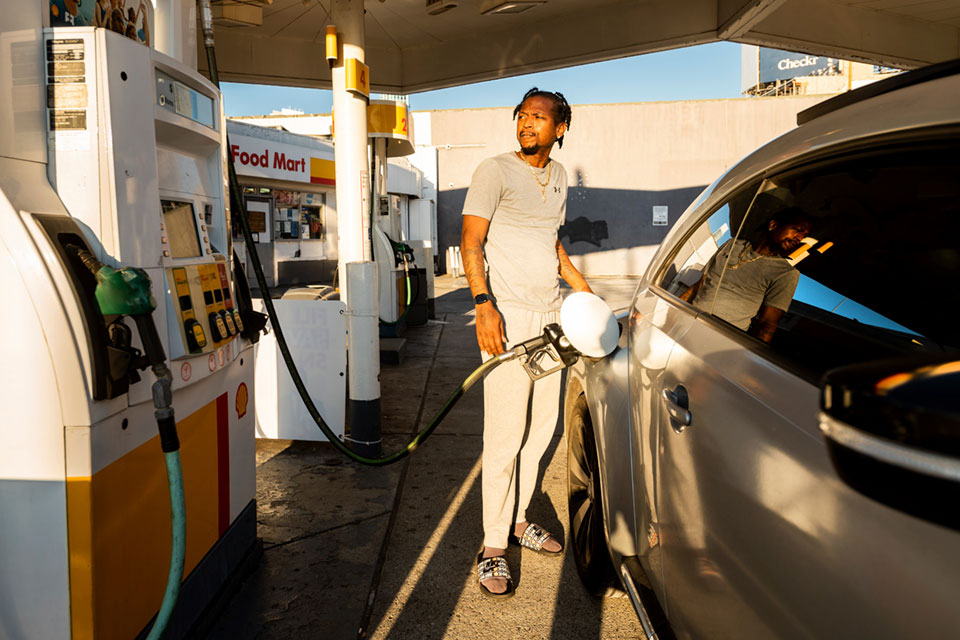 A motorist fills up at a Shell station on Monday, Nov. 22, 2021, in San Francisco, where regular unleaded gasoline was selling for $5.85 per gallon. President Joe Biden on Tuesday, Nov. 23, 2021, ordered 50 million barrels of oil released from America's strategic reserve to help bring down energy costs, in coordination with other major energy consuming nations, including India, the United Kingdom and China. (AP Photo/Noah Berger)

"Right now, I will do what needs to be done to reduce the price you pay at the pump," Biden said at the White House.

He said the administration also is looking into potential price gouging by gas companies squeezing customers while making money off the lowered oil costs. Energy Secretary Jennifer Granholm, too, said U.S. companies are part of the problem, keeping production below pre-pandemic levels in order to increase profits.

The coronavirus pandemic roiled energy markets everywhere. As it bore down and economic activity sank in April of last year, energy demand collapsed and oil futures prices turned negative. Energy traders did not want to get stuck with crude that they could not store. But as the economy recovered, production lagged and prices jumped to a seven-year high in October.

U.S. production has not recovered. Energy Information Administration figures indicate that domestic production is averaging roughly 11 million barrels daily, down from 12.8 million before the pandemic.

Americans are feeling the squeeze. For Matt Hebard of Agoura Hills, Calif., it’s taking $80 to gas up his SUV. “Gas prices are definitely on everyone’s minds right now,” he said as he filled up at a station in his suburb northwest of Los Angeles.

He hoped the president’s move has a good long-term effect.

Sy Amber, meanwhile, was en route to Las Vegas from his California home. Unhappily spending more money filling up his car, he said he didn't expect Biden's action to work and didn't agree with them.

“I'm not happy with our president,” he said.

Republicans in Congress are pointing to Biden’s efforts to minimize drilling and support renewable energy as a reason for the decreased production, though there are multiple market dynamics at play as fossil fuel prices are higher around the world.

Biden and administration officials insist that tapping more oil from the reserve does not conflict with his climate goals, because this short-term fix meets a specific problem, while climate policies are a long-term answer over decades.

They argue that the administration's push to boost renewable energy will eventually mean less dependence in the U.S. on fossil fuels. But that’s a politically convenient argument — in simple terms, higher prices reduce usage, and significantly higher gasoline prices could force Americans into less reliance on fossil fuels.

The White House decision came after weeks of diplomatic negotiations. Biden and President Xi Jinping of China talked over steps to counter tight petroleum supplies in their virtual meeting earlier this month and “discussed the importance of taking measures to address global energy supplies,” according to the White House.