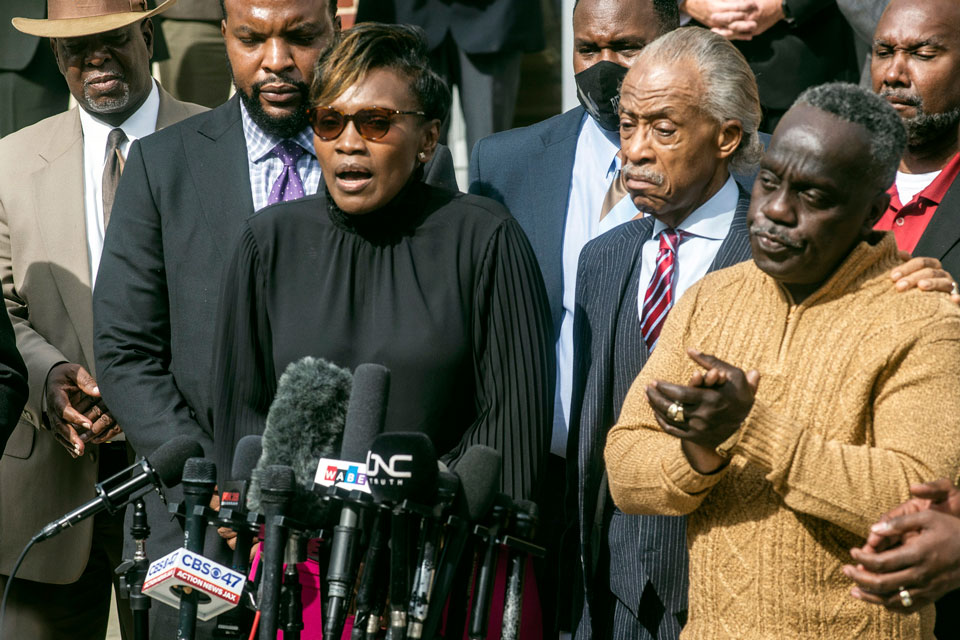 BRUNSWICK, Ga. (AP) — The Rev. Jesse Jackson joined Ahmaud Arbery’s parents Monday at the trial of three white men charged with murdering their son, prompting an unsuccessful request by a defense attorney to have the civil rights leader removed.

Father and son Greg and Travis McMichael armed themselves and pursued the 25-year-old Black man in a pickup truck after spotting him running in their neighborhood on Feb. 23, 2020.

Their neighbor William “Roddie” Bryan joined the chase and told police he ran Arbery off the road with his own truck before taking cellphone video of Travis McMichael shooting him three times with a shotgun. 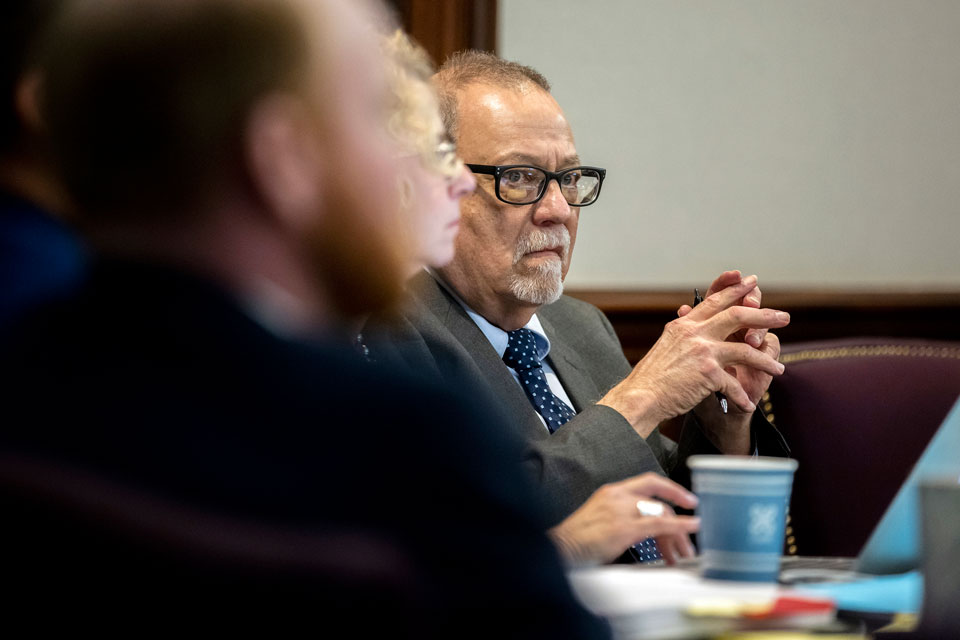 Greg McMichael, center, sits with his attorneys during his trial in the Glynn County Courthouse, Tuesday, Nov. 9, 2021, in Brunswick, Ga. Greg McMichael along with his son Travis McMichael and a neighbor, William "Roddie" Bryan are charged with the February 2020 slaying of 25-year-old Ahmaud Arbery. (AP Photo/Stephen B. Morton, Pool) 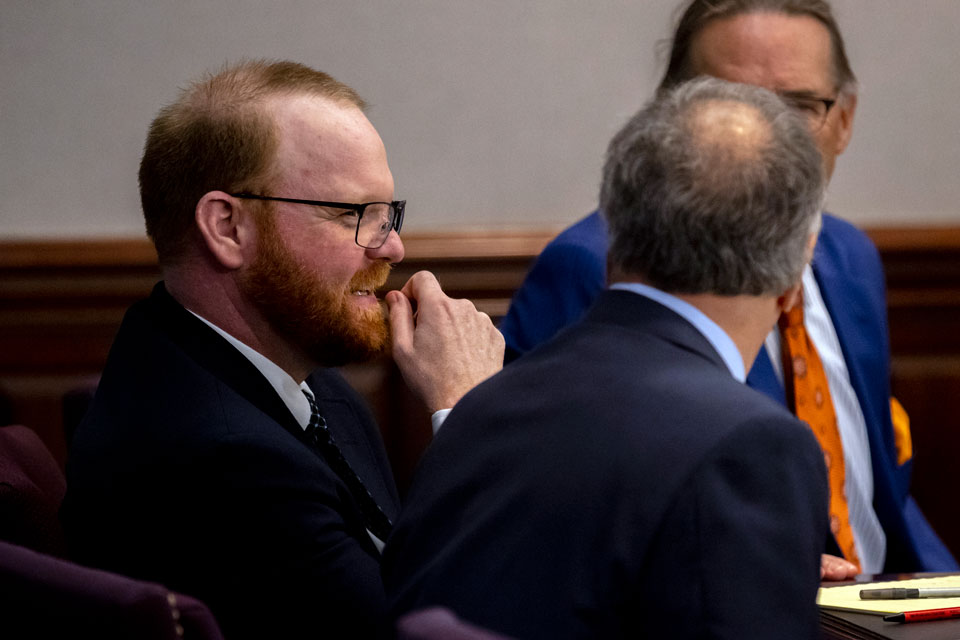 Travis McMichael, left, listens to his attorney Robert Rubin during a recess in his trial in the Glynn County Courthouse, Tuesday, Nov. 9, 2021, in Brunswick, Ga. Travis McMichael along with his father Greg McMichael and a neighbor, William "Roddie" Bryan are charged with the February 2020 slaying of 25-year-old Ahmaud Arbery. (AP Photo/Stephen B. Morton, Pool)The same defense lawyer complained last week when the Rev. Al Sharpton joined Arbery’s mother and father inside the Glynn County courtroom. Attorney Kevin Gough said he feared Sharpton was trying to influence the jury, telling the judge “we don’t want any more Black pastors coming in here."

Gough renewed his concern Monday when Jackson sat in the back of the courtroom gallery between Arbery's mother, Wanda Cooper-Jones, and father, Marcus Arbery Sr. The civil rights leader wore a mask, but at one point pulled it down beneath his chin while speaking with Cooper-Jones. 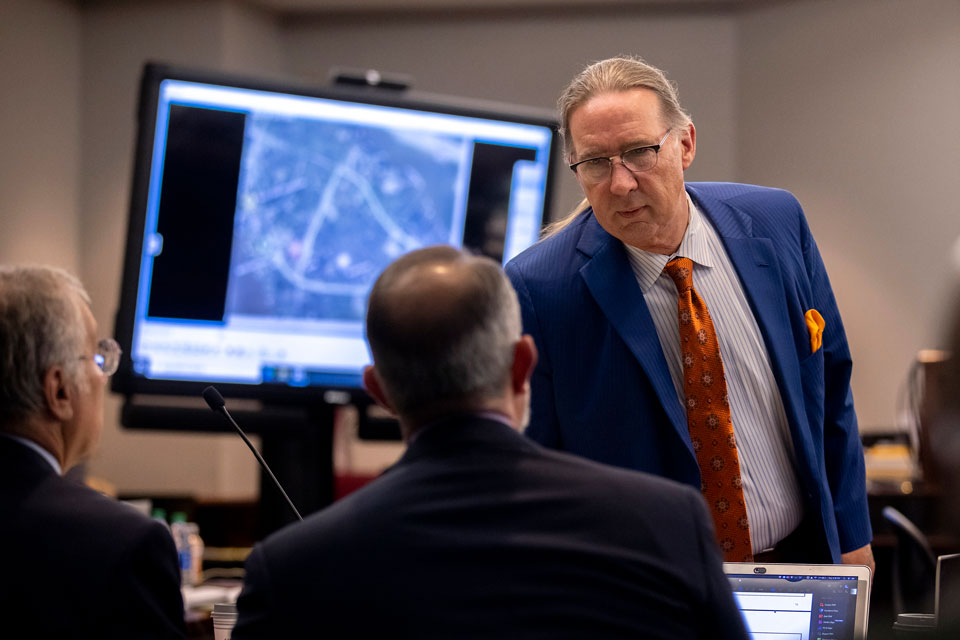 Defense attorney Franklin Hogue speaks with other defense attorney's during the trial of Greg McMichael and his son, Travis McMichael, and a neighbor, William "Roddie" Bryan in the Glynn County Courthouse, Tuesday, Nov. 9, 2021, in Brunswick, Ga. The three are charged with the February 2020 slaying of 25-year-old Ahmaud Arbery. (AP Photo/Stephen B. Morton, Pool)“In the context of this trial, we object to his presence in the public gallery,” Gough told the judge while the jury was outside the courtroom.

“How many pastors does the Arbery family have? We had the Rev. Al Sharpton last week.” 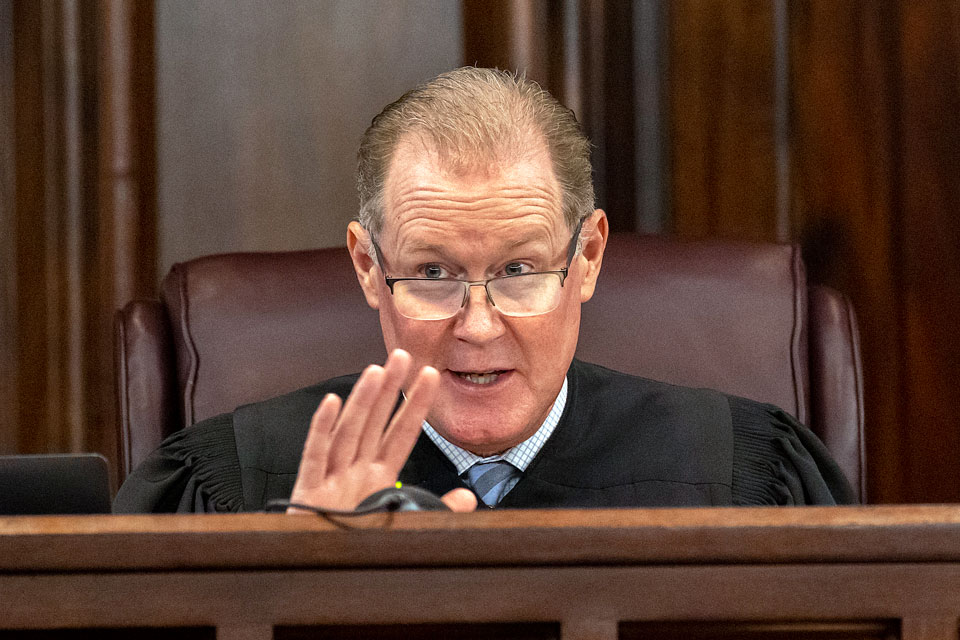 Superior Court Judge Timothy Walmsley addresses an objection by the defense during the trial of Greg McMichael and his son, Travis McMichael, and a neighbor, William "Roddie" Bryan in the Glynn County Courthouse, Tuesday, Nov. 9, 2021, in Brunswick, Ga. (AP Photo/Stephen B. Morton, Pool)He added: “There is no reason for these prominent icons in the civil rights movement to be here. With all due respect, I would suggest, whether intended or not, that inevitably a juror is going to be influenced by their presence in the courtroom."

Superior Court Judge Timothy Walmsley declined to ask Jackson to leave. Courtrooms are generally open to the public, although the judge has limited seating in the public gallery because of the coronavirus pandemic.

“The court is not going to single out any particular individual or group of individuals as not being allowed into his courtroom as a member of the public,” Walmsley said. “If there is a disruption, you’re welcome to call that to my attention.”

Over 100 Black Pastors to form 'Wall of Prayer'

Rev. Al Sharpton has called for 100 or more Black pastors to stand in solidarity and prayer with Auhmed Arbery's family this Thursday at noon in front of the Glynn County Courthouse.

Sharpton commented on Gough's request for his removal: “There is no way to clarify his insult. It shows basic bias- the same bias that killed Ahmaud Arbery.”

Among Thursday’s co-conveners are Bishop Reginald Jackson, AME Church (African Methodist Episcopal), Rev. Jamal Bryant of New Birth Missionary Baptist Church and others, and more are signing up to Sharpton’s appeal. The attorneys for the family Attorney Benjamin Crump and Lee Merritt, Esquire will be among those standing with the clergy and family.

Georgia Bureau of Investigation Agent Jason Seacrist returned to the witness stand Monday and was questioned by a defense lawyer about his interviews with Bryan. Gough pressed Seacrist about his client's claims that Arbery tried to get into Bryan's truck during the chase. Investigators testified they found Arbery's fingerprints on the truck near one of the door handles.

“Is it fair to say the first identifiable crime Mr. Bryan personally witnessed that day would be Mr. Arbery trying to get in his truck?” Gough asked. 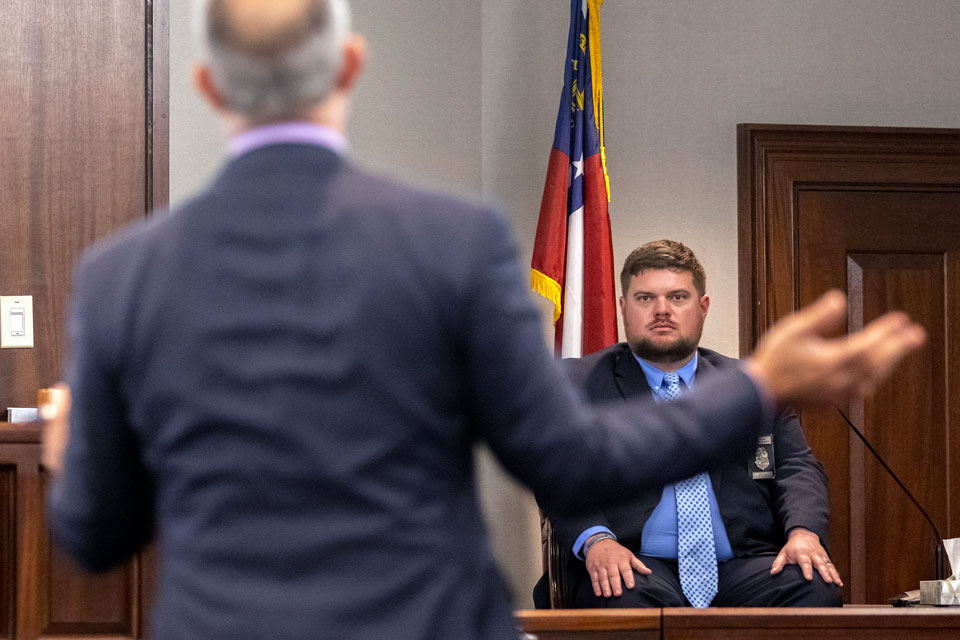 ravis McMichael's attorney Jason B. Sheffield, center, questions Glynn County Police Department Investigative Detective Parker Marcy, right, during the trial of Greg McMichael and his son, Travis McMichael, and a neighbor, William "Roddie" Bryan in the Glynn County Courthouse, Tuesday, Nov. 9, 2021, in Brunswick, Ga. (AP Photo/Stephen B. Morton, Pool)Seacrist replied: “Unless you discount the fact that somebody was trying to chase Mr. Arbery down while he was legally running, jogging in the road.”

Bryan and the McMichaels are charged with murder and other crimes. Prosecutors say they chased Arbery for five minutes to keep him from exiting the Satilla Shores subdivision outside the port city of Brunswick. The chase ended when Arbery, trailed by Bryan's truck, tried to run around the McMichaels' truck as it idled in the road ahead. The video shows Travis McMichael confronting Arbery and then shooting him as he throws punches and grapples for the gun.

The McMichaels told police they suspected Arbery was a burglar after security cameras several times recorded him inside the unfinished home five doors from their own house. Defense attorneys say Travis McMichael opened fire in self-defense.