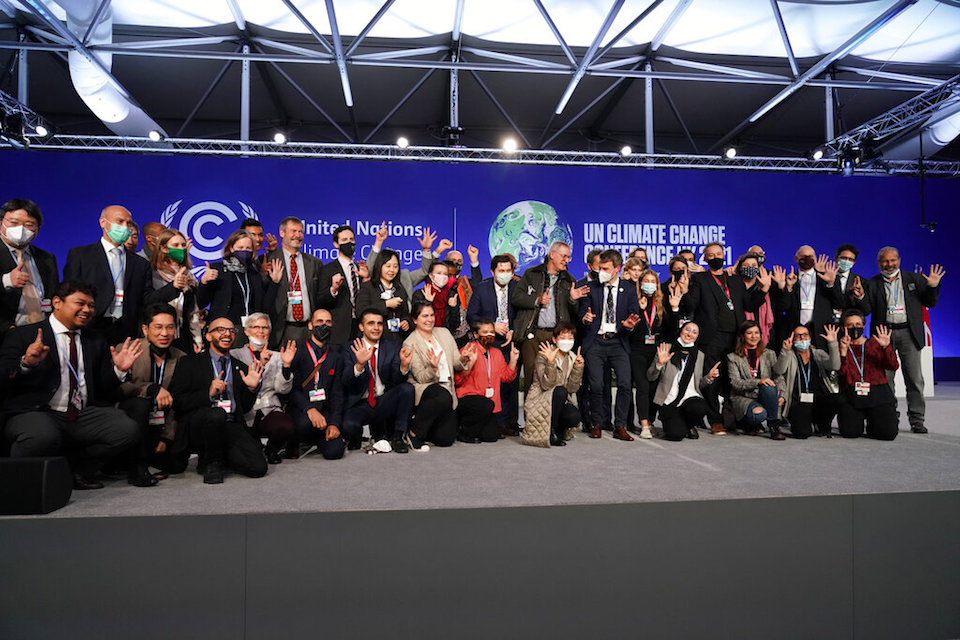 GLASGOW, Scotland (AP) — After two years of preparation and 13 days of tough talks, did negotiators at the U.N. climate meeting in Glasgow save the planet?

But they were hardly expected to do so. The annual Conference of the Parties, just held for the 26th time, is all about getting countries to gradually ratchet up their measures to defuse global warming.

The focus of the Glasgow talks was not to forge a new treaty but to finalize the one agreed to in Paris six years ago and to build on it by further curbing greenhouse gas emissions, bending the temperature curve closer to levels that don't threaten human civilization.

Here's a look at what was achieved in Glasgow:

Going into the Glasgow talks, most countries, including the United States, China and the 27 members of the European Union, declared new, more ambitious targets for reducing emissions.

Some, such as India, announced additional measures at the meeting itself. Side deals brokered by host country Britain covered issues such as reversing deforestation, boosting electric vehicles, phasing out coal, clamping down on methane emissions and unlocking investor cash for the fight against climate change.

Within the official negotiations, countries agreed to firmly focus on the most ambitious goal in the 2015 Paris accord, of keeping global warming from going beyond 1.5 degrees Celsius (2.7 Fahrenheit). Experts and vulnerable countries have long advocated for this, but some nations previously held onto the option of aiming for “well below 2 C (3.6 F).”

They also agreed to explicitly target coal use and fossil fuel subsidies, though the original proposals were greatly watered down.

In a bid to spur further ambition, major emitters will be asked to present new targets at the 2022 U.N. climate conference in Egypt.

There was bad blood going into the meeting because rich countries have failed to meet their pledge of providing $100 billion each year by 2020 to help poor nations cope with climate change.

The final agreement expressed “deep regret” about the funding failure and urges rich nations to come up with the money as soon as possible.

The share and amount of money earmarked for poor countries to adapt to rising sea levels and other impacts of climate change was also increased, though not by as much as they had demanded.

Wealthy nations such as the United States and European Union members rejected demands to establish a fund to compensate poor countries for the destruction wrought by climate change, which developed countries are significantly responsible for because of their past emissions.

Many vulnerable countries were angered by the decision but nevertheless backed the agreement in the hope of making progress on the “loss and damage” issue next year in Egypt.

Fixing the rules on international cooperation for reducing emissions, including carbon markets, had eluded nations since Paris. Six years on, it remained one of the hardest-fought issues in the negotiating room over the past two weeks.

The rules covering what’s known as Article 6 will become increasingly important as countries and companies aim to cut their emissions to “net zero” by 2050 by balancing out any remaining pollution they produce with an equal amount of carbon captured elsewhere.

While a compromise was found that proponents say could add trillions of dollars to the battle against climate change, some countries and environmental groups fear the deal left significant loopholes which could undermine the integrity of the system by allowing certain emissions cuts to be counted twice.

A shift by Brazil, under pressure by some of its major companies, proved decisive in clinching the deal. In return, the country gets to keep some carbon credits it amassed under an older system that experts say wasn't credible.

A small surcharge on carbon trades will go toward a fund to help poor countries adapt to global warming, but campaigners had hoped for the levy to be applied more broadly and blamed U.S. opposition for that happening in Glasgow.

Countries agreed to several tweaks to the rules on how and how often they need to report what they are doing to reduce emissions. While this may seem technical, experts argue that greater transparency and more frequent accounting are important for building trust because nations are closely watching what others do.

China has been particularly wary of having others scrutinize its efforts too closely. Along with other developed and emerging economies, it is now expected to report every five instead of every 10 years.