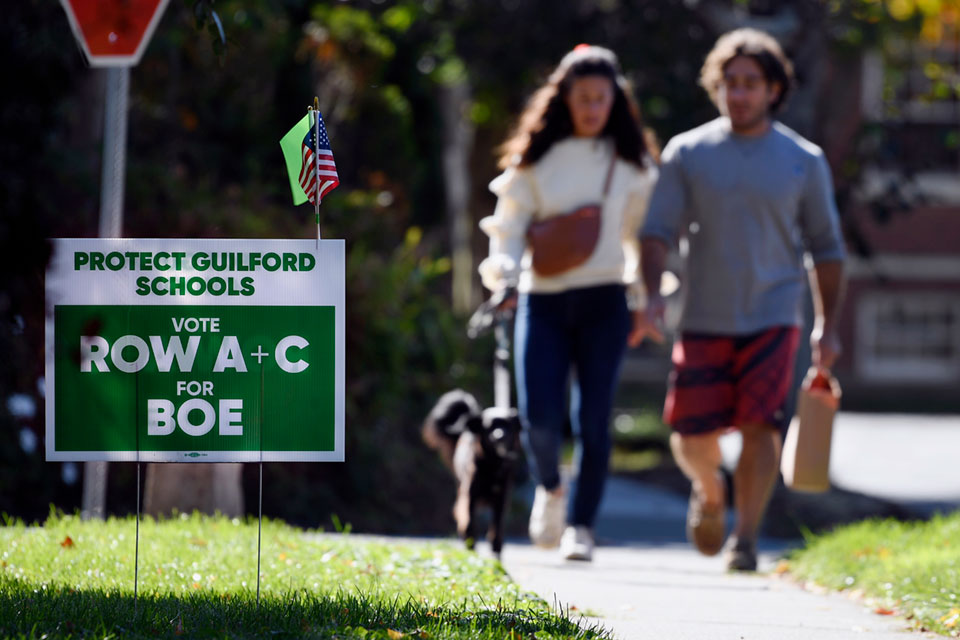 GUILFORD, Conn. (AP) — A racial reckoning began years ago for the Guilford school system, first with an episode in which a student wore blackface makeup to a home football game and then a fraught debate over the elimination of its mascot, the Indians. After the killing of George Floyd, district leaders announced they were doubling down on efforts to address social justice and racism in schools and teaching materials.

But an organized pushback in the overwhelmingly white community began last year with a petition for the superintendent’s removal. This summer, conservative activists won the GOP’s endorsement for school board, knocking out three incumbents in the Republican caucus. In next week’s elections, their slate aims to seize control of the school board.

The top issue on their platform is to fight critical race theory, which has become a rallying cry for activist candidates in the Nov. 2 elections all over the country who take issue with how schools have addressed diversity and inclusion.

“It was a surprise to me to be lumped in that national conversation,” Superintendent Paul Freeman said. “There have been direct accusations in Guilford that teachers are bullying and indoctrinating children in leftist political agenda. That could not be more wrong.”

The school board elections will test the durability of conservative efforts to attack equity initiatives, with much at stake. Where opponents see efforts to stop liberal indoctrination, incumbents and school administrators fear takeovers could result in school board members becoming thorns in the side of professional educators. 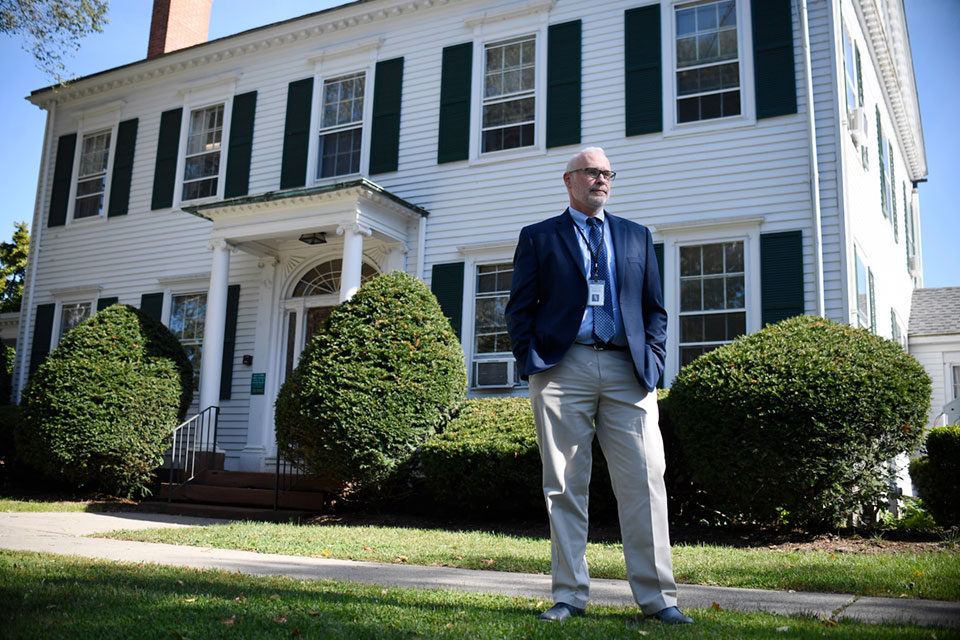 Guilford Public Schools Superintendent Paul Freeman stands outside of Guilford Board of Education offices, in Guilford, Conn., on Tuesday, Oct. 19, 2021. The Nov. 2 school board elections will test the durability of conservative efforts to attack equity initiatives. Where opponents see efforts to stop liberal indoctrination, incumbents and school administrators fear takeovers could result in school board members becoming thorns in the side of professional educators. (AP Photo/Jessica Hill)

Interest in school board seats has surged, with national conservative groups and state-level efforts encouraging challenges by right-learning newcomers amid debates over COVID-19 mask mandates, gender-neutral bathrooms, and teachings on race.

Schools have been addressing issues of diversity and culturally responsive teaching for years without stirring much controversy, but flames of frustration in some communities have been fanned by groups with bigger agendas, said Jeffrey Henig, a professor of political science and education at Columbia University.

Some Republicans, he said, see it as an issue that can help them win suburban votes in midterm elections.

“It’s in the current context where I think this is being deliberately exploited by national actors that this is getting the energy and attention it does,” he said.

Critical race theory is a way of analyzing American history through the lens of racism. While the term has been applied broadly by some to any efforts toward inclusion, the theory itself is not a fixture of K-12 instruction.

In Guilford, a New Haven suburb of 22,000 on Connecticut’s shoreline, Freeman said the district's work on race and equity intensified after last year's debate over the mascot, which is now the Grizzlies, and the 2019 blackface episode at a game against a team from Hartford. Students and young alumni, he said, called on the school system to do more on topics of race and equity so graduates would not feel sheltered.

The work has included a self-audit of curriculum to ensure materials do not reflect implicit bias and include authors with diverse experiences and backgrounds. In eighth grade, for one example, students learn about enslaved people who lived in Guilford so they do not see the Colonial period in an idealized way, Freeman said.

Opponents criticized Freeman for assigning administrators to read books including “White Fragility: Why It’s So Hard for White People to Talk About Racism.” One national group, No Left Turn in Education, organized a June forum in Guilford on what they see as the threat of critical race theory. 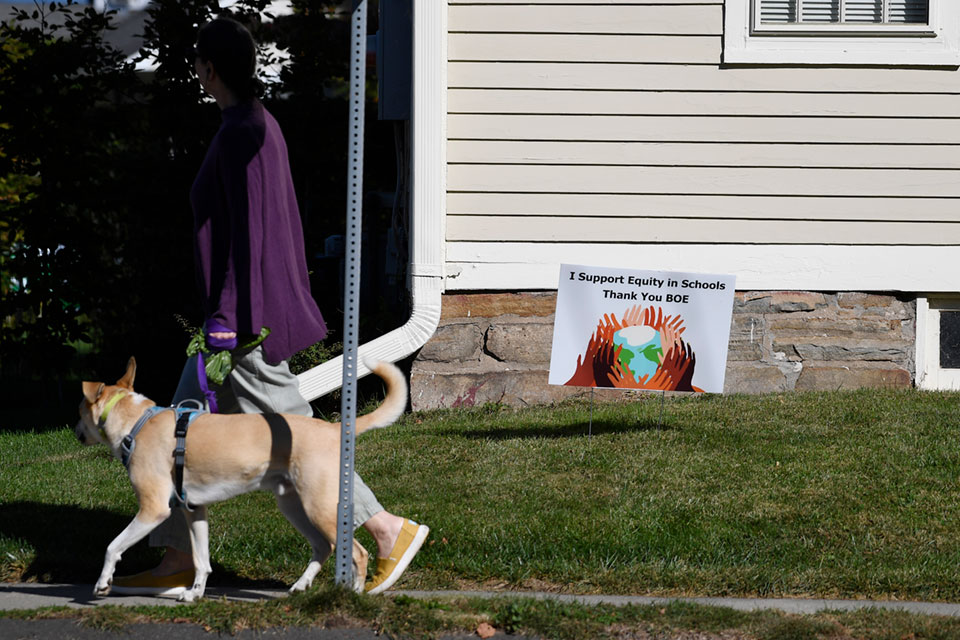 A woman walks her dog past a sign supporting equity in schools, in Guilford, Conn., on Tuesday, Oct. 19, 2021. (AP Photo/Jessica Hill)

One of the five candidates on the slate opposed to critical race theory, Danielle Scarpellino, a local business owner, said in an appearance on “ Fox & Friends First ” in July that it was district leaders who were introducing politics into schools, saying students were “being used as political pawns.” None of the candidates responded to interview requests from The Associated Press.

Another candidate, Tim Chamberlain, said on a campaign website that his child's teachers have “tried to persuade him to abandon his conservative viewpoint” during discussion of topics ranging from global warming to affirmative action.

Independent and Democratic candidates have joined forces to campaign against the slate of anti-critical race theory candidates. Among them is Kristy Faulkner, a molecular biologist and zoning board of appeals member who said she signed up to run after seeing equity and inclusion turned into bad words by her rivals.

She said she also worries that if the newcomers win, they would not find any middle ground with the existing school board members.

“I’m just envisioning basically a total meltdown of productivity on the board,”

It’s unclear how many of the thousands of U.S. school board races include agenda-driven newcomers, but there are examples around the country.

In Ohio, the number of school board candidates has ballooned by 50% from four years ago, according to the Ohio School Boards Association. Almost half of the 2,600 candidates are political newcomers, including many whose anger has been stoked by critical race theory.

Seven candidates are running for just three seats on the school board in Chagrin Falls, a suburb of Cleveland where some parents have objected to racial inclusion policies. In nearby Rocky River, a conservative slate taking aim at critical race theory is running on the slogan: “Education not activism."

In communities where mask mandates are attracting the most attention in school board races, as in Dover, New Hampshire, some candidates have also questioned approaches to diversity and inclusion. Several newcomers in Dover have said discussions of diversity should be broadened beyond race, and one candidate has spoken out against critical race theory. 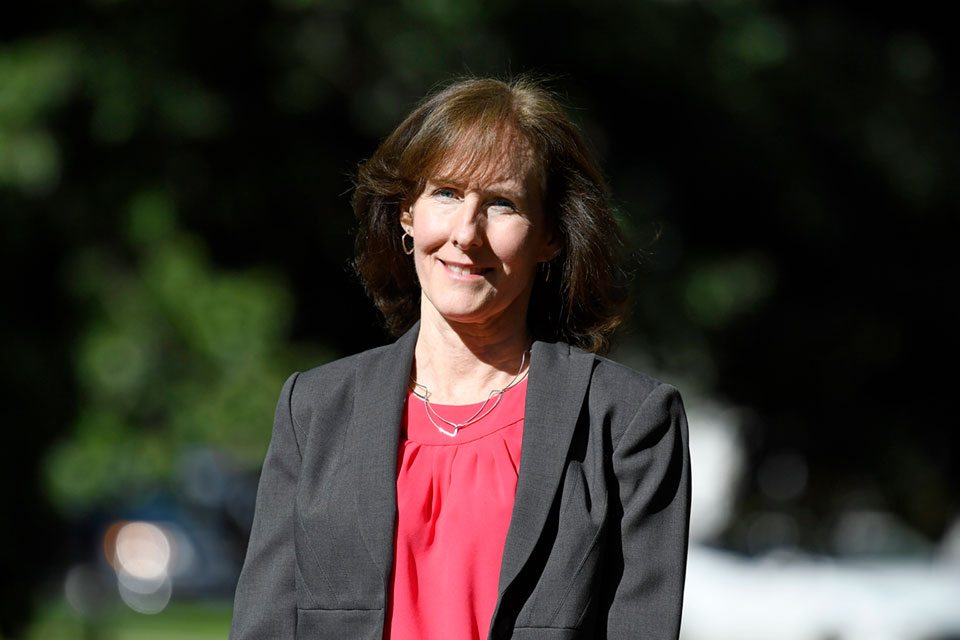 Guilford Public Schools Board of Education chair Kathleen Balestracci stands outside of BOE offices, in Guilford, Conn., on Tuesday, Oct. 19, 2021. Balestracci, a Democrat, said initiatives on equity and inclusion are important work that the district was asked to take on by students and community members. (AP Photo/Jessica Hill)

Guilford's nine-member school board is chaired by Kathleen Balestracci, a Democrat, who said initiatives on equity and inclusion are important work that students and community members asked the district to take on. Balestracci, who is not up for reelection, said she often has heard from parents seeking clarity on policies during her 10 years on the board — but nothing like the acrimony she has seen lately.

“I don’t think I’ve experienced a situation in which we have thoroughly explained what we’re trying to do and the approach we’re trying to take and then have the response be, ‘You’re lying,'" said Balestracci, a research faculty member at the Yale School of Medicine.