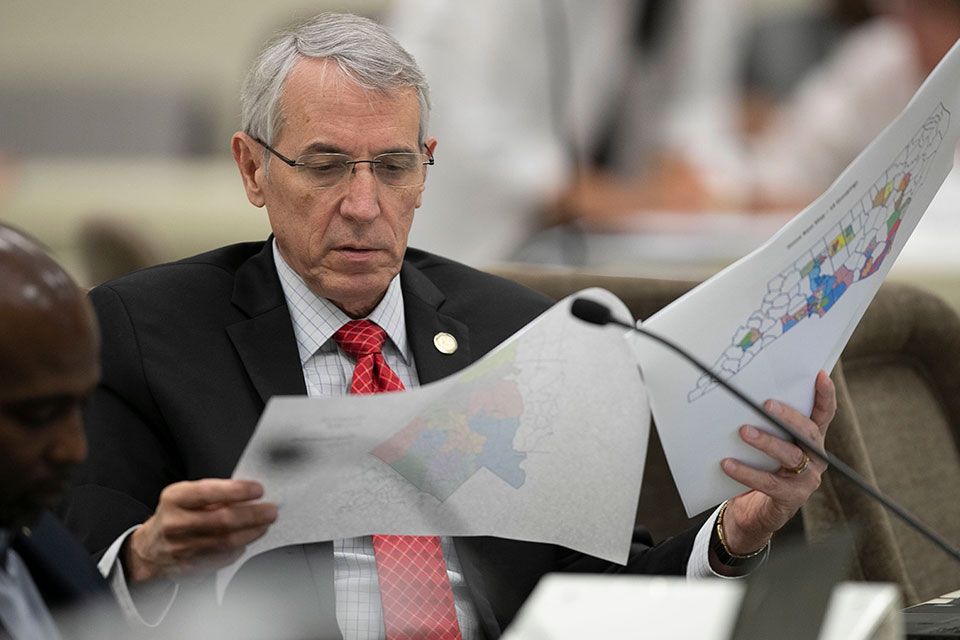 RALEIGH, N.C. (AP) — A decade ago, North Carolina Republicans redrew their legislative districts to help their party in a way that a federal court ruled illegally deprived Black voters of their right to political representation. A state court later struck down Republican-drawn maps as based on pure partisanship.

So, as the GOP-controlled legislature embarks this year on its latest round of redistricting, it has pledged not to use race or partisan data to draw the political lines. Still, the maps Republicans are proposing would tilt heavily toward their party. Several publicly released congressional maps dilute Democratic votes by splitting the state's biggest city, Charlotte — also its largest African American population center — into three or four U.S. House districts and giving the GOP at least a 10-4 advantage in a state that Donald Trump narrowly won last year.

As the once-a-decade redistricting process kicks into high gear, North Carolina is one of at least three states where Republicans say they are drawing maps without looking at racial and party data. But those maps still happen to strongly favor the GOP.

Democrats and civil rights groups are incredulous, noting that veteran lawmakers don't need a spreadsheet to know where voters of various races and different parties live in their state. Plus, under certain scenarios, the Voting Rights Act requires the drawing of districts where the majority of voters are racial or ethnic minorities.

“This is the first redistricting round I've ever heard of this," said Thomas Saenz, president of the Mexican American Legal Defense and Educational Fund, which is suing Texas Republicans over maps that the GOP said it drew without looking at racial data. “I suspect they're trying to set up a defense for litigation.

Jason Torchinsky, general counsel to the National Republican Redistricting Trust, said ignoring racial data is proper in certain circumstances, as in the cases of North Carolina and Texas.

“It depends on where you are,” Torchinsky said.

The drawing of legislative lines is often a raw partisan fight because whichever party controls the process can craft districts to maximize its voters' clout — and scatter opposing voters so widely they cannot win majorities.

In 2019, the U.S. Supreme Court ruled that federal courts cannot overturn unfair maps on the basis of partisanship. But state courts still can void maps for being too partisan and race remains a legal tripwire in redistricting.

If mapmakers explicitly try to weaken voters' power based on race, they may violate the U.S. Constitution's guarantee of equal protection under the law. But the Voting Rights Act requires them to consider race if the state has “racially polarized” voting, in which white people consistently vote against candidates backed by a minority racial or ethnic group. The mapmakers must then create a district in which that minority comprises a plurality or majority of voters so they can elect their preferred candidates.

“It’s truly a conundrum and has been for the last decade for the GOP, because when we look at race, we were told we shouldn’t have, and those maps were struck down,” said North Carolina state Sen. Paul Newton, who co-chairs that state's redistricting committee.

North Carolina's redistricting legal fight is part of why the new race-blind approach caught on.

The Republican-controlled legislature has complete control of redistricting; its maps cannot be vetoed by its Democratic governor. A federal court in 2016 found North Carolina Republicans improperly crammed Black voters into two congressional districts to dilute African American votes elsewhere. It ordered the map redrawn, and in a separate case another panel of judges found that dozens of state legislative districts were illegal racial gerrymanders as well. The updated congressional map was the basis of the 2019 Supreme Court case.

But, barely two months later, a North Carolina state court found the GOP advantage in some of the redrawn state legislative maps still violated the state constitution. Based on this and other rulings, Republicans redrew the maps once again in late 2019, this time saying they weren't looking at racial or partisan data, and they passed legal muster.

Then, in August, the legislature formally adopted a rule that it wouldn't consider race or partisanship in its latest line-drawing that would begin after the U.S. Census Bureau released data on population changes over the past decade. Lawmakers noted that, during the epic litigation of the prior decade, a federal court had found the state didn't have racially polarized voting and didn't require special attention to racial data.

Democrats and civil rights groups strenuously objected. The Southern Coalition for Social Justice wrote Republicans a letter warning they would be disenfranchising Black and Latino voters.

Other GOP-controlled states have followed North Carolina's example. For the past five decades, Texas has been found to have violated federal law or the U.S. Constitution in redistricting, including by shortchanging Black and Latino voters. This time, Republicans who control the state Legislature said they wouldn't consider racial data and their lawyers said that was OK.

“I’ve stated it, and I’ll state it again — we drew these maps race blind,” Texas state Sen. Joan Huffman, a Republican who drew that state's maps, said in one Senate hearing.

Although almost all of Texas' population growth has come from Latinos, African Americans and Asian Americans, the maps do not create any new majority Black or Latino districts. That latter omission is at the heart of suits by Latino civil rights groups last week as Texas approved its maps.

“The only time that communities of color can get justice is going to the courthouse,” said Democratic state Rep. Rafael Anchia, chair of the Mexican American Legislative Caucus.

Ohio Republicans are also enmeshed in litigation over their state legislative plan, which they said was drawn with no racial or partisan data. “It’s illegal to use race in drawing districts. That’s a violation of federal law,” Republican state Senate President Matt Huffman told reporters last month.

Ohio Republicans said that even though they didn't use partisan data, they were targeted in a suit by several community and anti-gerrymandering groups for drawing a partisan map anyway.

“The way the map performs is to really skew partisan outcomes in Ohio,” said Freda Levenson, legal director of the ACLU of Ohio, one of the plaintiffs. “It's very likely they did use partisan data.”

Anderson is a corps member for the Associated Press/Report for America Statehouse News Initiative. Report for America is a nonprofit national service program that places journalists in local newsrooms to report on undercovered issues.