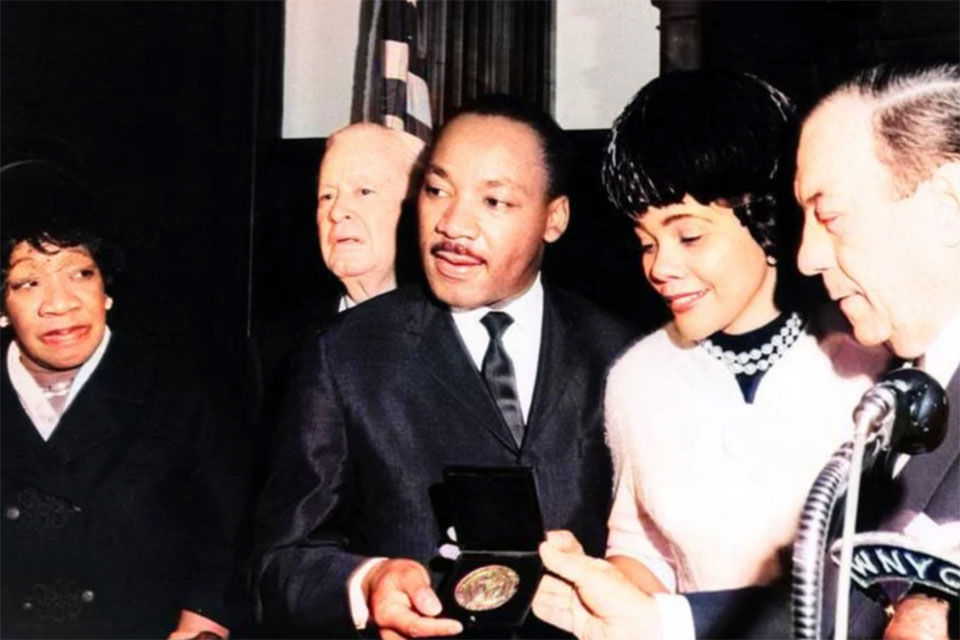 On October 14, 1964, Dr. Martin Luther King Jr. was awarded the Nobel Peace Prize "for his non-violent struggle for civil rights for the Afro-American population," according to the website. He was only 35, the youngest man to have received the prestigious award at the time. When he was notified that he'd won, he declared that he would donate his prize money of $54,123 to the Civil Rights Movement.

The Nobel Prize was set up by Alfred Nobel, an inventor, businessman and artist, who established prizes for achievements in peace, arts, and sciences to be awarded to “those who, during the preceding year, shall have conferred the greatest benefit to humankind.” Since 1901, the awards have been given annually except for during World War I and II.

Below you can watch, and read, his iconic speech given in Oslo, Norway on December 10, 1964.

I accept the Nobel Prize for Peace at a moment when 22 million Negroes of the United States of America are engaged in a creative battle to end the long night of racial injustice. I accept this award on behalf of a civil rights movement which is moving with determination and a majestic scorn for risk and danger to establish a reign of freedom and a rule of justice. I am mindful that only yesterday in Birmingham, Alabama, our children, crying out for brotherhood, were answered with fire hoses, snarling dogs and even death. I am mindful that only yesterday in Philadelphia, Mississippi, young people seeking to secure the right to vote were brutalized and murdered. And only yesterday more than 40 houses of worship in the State of Mississippi alone were bombed or burned because they offered a sanctuary to those who would not accept segregation. I am mindful that debilitating and grinding poverty afflicts my people and chains them to the lowest rung of the economic ladder.

After contemplation, I conclude that this award which I receive on behalf of that movement is a profound recognition that nonviolence is the answer to the crucial political and moral question of our time – the need for man to overcome oppression and violence without resorting to violence and oppression. Civilization and violence are antithetical concepts. Negroes of the United States, following the people of India, have demonstrated that nonviolence is not sterile passivity, but a powerful moral force which makes for social transformation. Sooner or later all the people of the world will have to discover a way to live together in peace, and thereby transform this pending cosmic elegy into a creative psalm of brotherhood. If this is to be achieved, man must evolve for all human conflict a method which rejects revenge, aggression and retaliation. The foundation of such a method is love.

The tortuous road which has led from Montgomery, Alabama to Oslo bears witness to this truth. This is a road over which millions of Negroes are travelling to find a new sense of dignity. This same road has opened for all Americans a new era of progress and hope. It has led to a new Civil Rights Bill, and it will, I am convinced, be widened and lengthened into a super highway of justice as Negro and white men in increasing numbers create alliances to overcome their common problems.

I refuse to accept the cynical notion that nation after nation must spiral down a militaristic stairway into the hell of thermonuclear destruction. I believe that unarmed truth and unconditional love will have the final word in reality. This is why right temporarily defeated is stronger than evil triumphant. I believe that even amid today’s mortar bursts and whining bullets, there is still hope for a brighter tomorrow. I believe that wounded justice, lying prostrate on the blood-flowing streets of our nations, can be lifted from this dust of shame to reign supreme among the children of men. I have the audacity to believe that peoples everywhere can have three meals a day for their bodies, education and culture for their minds, and dignity, equality and freedom for their spirits. I believe that what self-centered men have torn down men other-centered can build up. I still believe that one day mankind will bow before the altars of God and be crowned triumphant over war and bloodshed, and nonviolent redemptive good will proclaim the rule of the land. “And the lion and the lamb shall lie down together and every man shall sit under his own vine and fig tree and none shall be afraid.” I still believe that We Shall overcome!

This faith can give us courage to face the uncertainties of the future. It will give our tired feet new strength as we continue our forward stride toward the city of freedom. When our days become dreary with low-hovering clouds and our nights become darker than a thousand midnights, we will know that we are living in the creative turmoil of a genuine civilization struggling to be born.

Today I come to Oslo as a trustee, inspired and with renewed dedication to humanity. I accept this prize on behalf of all men who love peace and brotherhood. I say I come as a trustee, for in the depths of my heart I am aware that this prize is much more than an honor to me personally.

Every time I take a flight, I am always mindful of the many people who make a successful journey possible – the known pilots and the unknown ground crew.

So you honor the dedicated pilots of our struggle who have sat at the controls as the freedom movement soared into orbit. You honor, once again, Chief Lutuli of South Africa, whose struggles with and for his people, are still met with the most brutal expression of man’s inhumanity to man. You honor the ground crew without whose labor and sacrifices the jet flights to freedom could never have left the earth. Most of these people will never make the headline and their names will not appear in Who’s Who. Yet when years have rolled past and when the blazing light of truth is focused on this marvelous age in which we live – men and women will know and children will be taught that we have a finer land, a better people, a more noble civilization – because these humble children of God were willing to suffer for righteousness’ sake.

I think Alfred Nobel would know what I mean when I say that I accept this award in the spirit of a curator of some precious heirloom which he holds in trust for its true owners – all those to whom beauty is truth and truth beauty – and in whose eyes the beauty of genuine brotherhood and peace is more precious than diamonds or silver or gold.

Kings contribution to the civil rights movement, and humankind, can never be unstated. We are standing on his shoulders as we lift and as we climb.