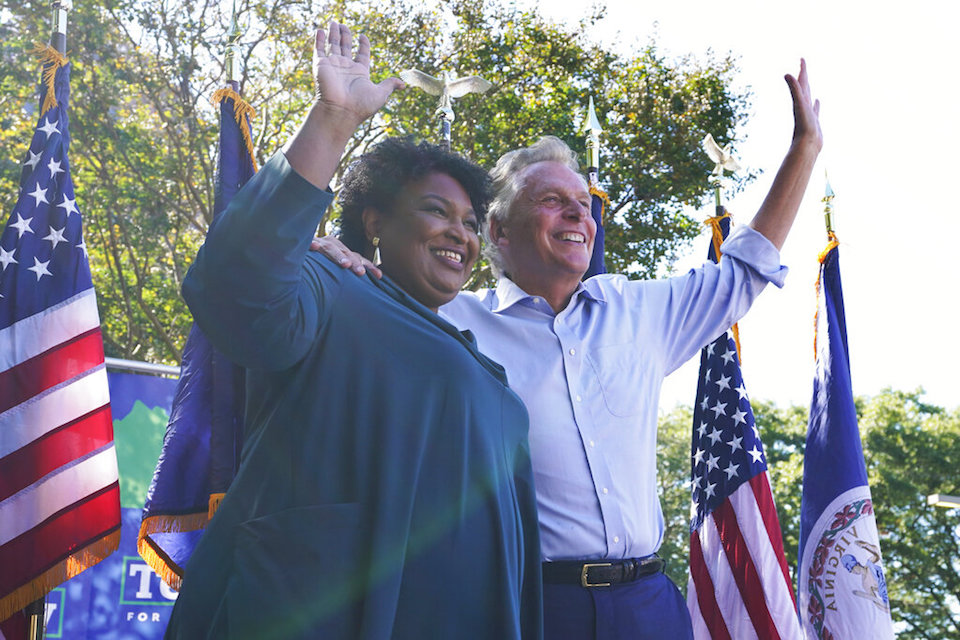 NORFOLK, Va. (AP) — Voting rights advocate Stacey Abrams on Sunday urged Black churchgoers to turn out for Democrat Terry McAuliffe in next month's Virginia governor's election, saying that what happens in the most watched race this year will “show the world who we are" in future contests with even higher stakes.

McAuliffe, governor from 2014 to 2018 and a former Democratic National Committee chairman, visited separate churches and later led a rally with Abrams outside an early voting station. “We gotta get everybody out to vote,” he said.

Abrams is a leading voice

Abrams has become a leading national voice in the party since narrowly losing the 2018 race for governor in Georgia. With her appearances at three churches in Norfolk, Abrams is joining other political heavyweights in trying to ensure that a state trending increasingly Democratic in recent years does not flip back to the Republican column on Nov. 2.

“I am the daughter of not one, but two pastors,” said Abrams, who like all attendees entering Second Calvary Baptist Church showed a card indicating that she was fully vaccinated against the coronavirus.

The pastor, Geoffrey Guns, wore a black T-shirt emblazoned with “VOTE” and told the congregation that what's “coming up is a very important election.” He repeated the phrase to louder applause and cries of ”Amen."

President Joe Biden won Virginia by 10 percentage points over Donald Trump in 2020, but the McAuliffe-Youngkin race appears to be coming down to the wire. To shore up a contest they hope will give them momentum heading into next year’s midterms, when the party’s narrow control of Congress is at stake, national Democrats are turning out in force for McAuliffe.

First lady Jill Biden campaigned with him on Friday. Former President Barack Obama is coming this week. Atlanta Mayor Keisha Lance Bottoms visited three Black churches in Richmond on Sunday. Vice President Kamala Harris, in a video to be seen at 300 churches statewide for the next two-plus weeks, calls McAuliffe "the leader Virginia needs at this moment.” Biden is planning his own visit.

Youngkin has largely shied away from outside Republican stalwarts, hoping to attract independents disillusioned by Trump. Youngkin has not campaigned personally with Trump, though they both phoned into a Virginia rally hosted last week by Steve Bannon, a longtime Trump strategist.

Abrams told the congregations that in McAuliffe's first term as governor, he increased funding for education and ensured that tens of thousands of former felons and others who had been removed from voter rolls had their right to the ballot box restored.

"I know you get tired of being called a bellwether state but I’m going to tell you — as someone from one of those newly purplish states — we’ve got to look to you for wisdom,” she said, referring to once reliably Republican Georgia backing Biden and two Democratic senators last cycle.

At Faith Deliverance Christian Center, where congregants gathered in a gymnasium, the pastor, Sharon Riley, thanked Abrams for not being elected Georgia governor because “we now see that God had a plan” and that Abrams' work since in defense of voting rights has made her one of the “most significant” people in the nation.

Abrams said when she first began running for office, she felt mixing politics and church was bad. But, she said, her mother eventually reminded her that “politics is always in the church” and her father said that the Bible “is one of the most intense political texts ever written.”