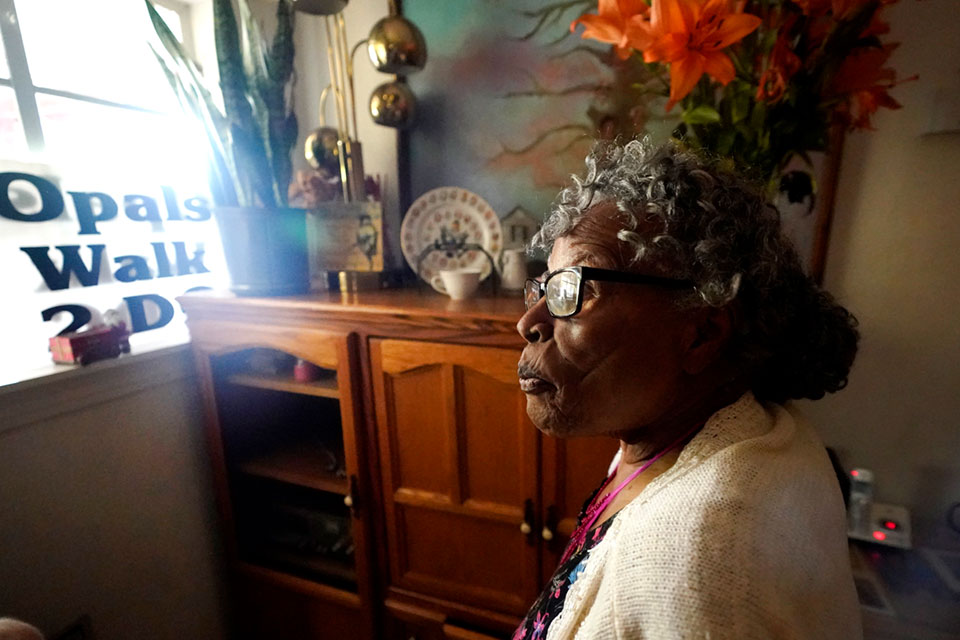 FORT WORTH, Texas (AP) — Opal Lee's dream of seeing Juneteenth become a federal holiday was finally realized over the summer, but the energetic woman who spent years rallying people to join her push for the day commemorating the end of slavery is hardly letting up on a lifetime of work teaching and helping others.

Lee, who celebrated her 95th birthday Thursday, has devoted decades to making a difference in her Texas hometown of Fort Worth. She then saw her legacy in recent years stretch far beyond the city as she worked to get national recognition for Juneteenth, and stood beside President Joe Biden as he signed into law the bill making June 19 a federal holiday that commemorates when Union soldiers brought the news of freedom to enslaved Black people in Galveston, Texas, after the Civil War.

“We don’t want people to think that Juneteenth is a stopping point, because it isn’t,”

Lee, who worked for over two decades as a teacher and counselor in the Fort Worth school district, told The Associated Press. “It’s a beginning, and we’re going to address some of the disparities that we know exist.”

Her recent work in Fort Worth has included establishing a large community garden that produced 7,700 pounds of fruits and vegetables last year, delivering food to people who can’t leave their homes and working alongside others to transform a former Ku Klux Klan auditorium into a museum and center for the arts.

As for Juneteenth, she’d like to see festivities span until the Fourth of July — and incorporate events to provide resources to help people with finances, health and other issues.

Lee was born in 1926 in Marshall, nestled in the Piney Woods of East Texas near the border with Louisiana. Her family later moved to Fort Worth when her father took a job there working on the railroad, but her Juneteenth memories stretch back to her celebrations in Marshall as a young girl.

Her memories of Juneteenth also include a harrowing attack on her family on that day in 1939, when a white mob of hundreds descended on their Fort Worth home days after the Black family moved into a white neighborhood. She, her parents and two brothers all managed to escape, but her parents never talked about that day again. The mob smashed windows and furniture, according to newspaper reports from the time.

“We would have been good neighbors, but they didn’t give us the chance to let them know how good we could have been,” Lee said.

Lee’s childhood came in the shadow of widespread white-on-Black violence in the U.S. In 1921, a white mob went on a deadly rampage in Tulsa, Oklahoma, burning over 1,000 homes and destroying a thriving business district known as Black Wall Street. Two years prior, hundreds of Black people were beaten, hanged, shot and burned to death by white mobs around the U.S. in what’s known as the “Red Summer.”

Lee is among numerous people who have pushed for a national Juneteenth holiday over the years. 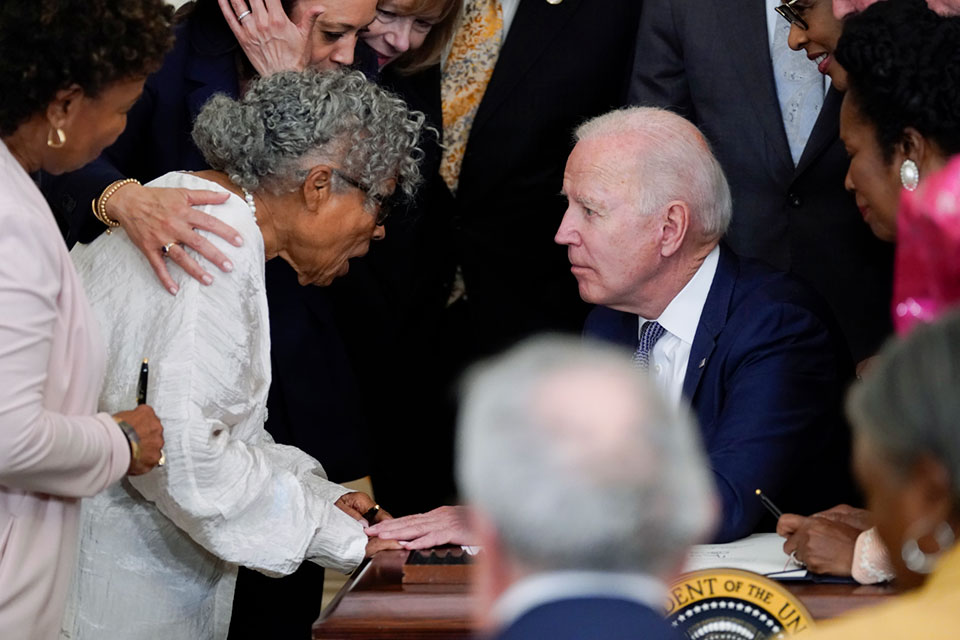 FILE - In this Thursday, June 17, 2021 file photo, President Joe Biden speaks with Opal Lee after he signed the Juneteenth National Independence Day Act, in the East Room of the White House in Washington. Opal Lee's dream of seeing Juneteenth become a federal holiday was finally realized over the summer, but the energetic woman who spent years rallying people to join her push for the day commemorating the end of slavery is hardly letting up on a lifetime of work teaching and helping others. (AP Photo/Evan Vucci, File)

Her granddaughter, Dione Sims, said it was in 2016 that Lee decided the effort to was taking too long. “She said, ‘It just needs some attention,’” Sims said.

Reasoning that “somebody would notice a little old lady in tennis shoes,” Lee planned to walk from Fort Worth to Washington, D.C. That morphed into Lee doing walks in cities before traveling to the nation’s capital. She went on to organize more walks, meet with politicians and gather signatures. Her efforts drew recognition from celebrities, including Sean “Diddy” Combs, Lupita Nyong’o and Usher.

“You have to have people who are dedicated to making things happen, and she was certainly dedicated to that and pulling things forward,” said Annette Gordon-Reed, a Harvard University professor and Pulitzer Prize-winning historian whose book “On Juneteenth” was published this year.

Educating young people remains a focus for Lee, who earned a master’s degree in education from what is now the University of North Texas in Denton. She wants to make sure that students’ textbooks tell the full history of racial injustices in the U.S. so that “we can heal from it and not let it happen again.”

Recently, what schools teach about race and racism has become a political lightning rod, with some Republican-led states, including Texas, banning or limiting the teaching of certain concepts.

“I’m adamant about schools actually having the truth told,” said Lee, who has written a children’s book titled “Juneteenth” that helps teach the history of slavery.

In one of her most recent projects, Lee is a founding member of a coalition called Transform 1012 N. Main Street, which is working to turn that Fort Worth building — a former KKK auditorium — into the Fred Rouse Center and Museum for Arts and Community Healing, carrying the name of a Black man lynched in 1921.

“Let’s make it where people can come and see this reconciliation and all kinds of things that need to be done,” Lee said. 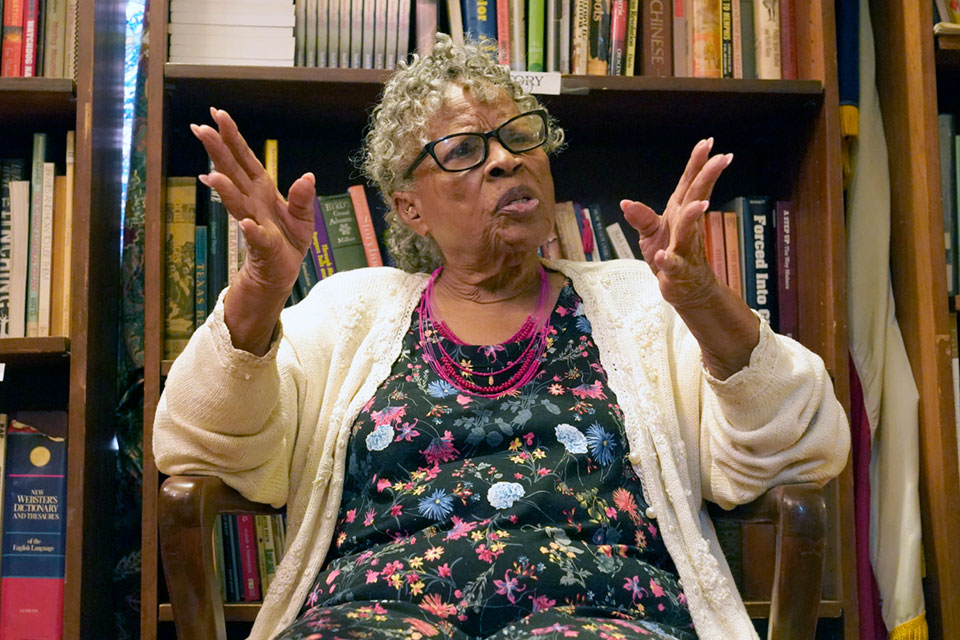 Opal Lee answers a question during an interview at her home Thursday, July 1, 2021, in Fort Worth, Texas. Opal Lee's dream of seeing Juneteenth become a federal holiday was finally realized over the summer, but the energetic woman who spent years rallying people to join her push for the day commemorating the end of slavery is hardly letting up on a lifetime of work teaching and helping others.(AP Photo/LM Otero)

Adam W. McKinney and Daniel Banks, co-founders of the arts and service organization DNAWORKS, brought together local activists for the project. McKinney said Lee has a way of leading that invites others to join.

“I learn so much from her in every one of our interactions,” McKinney said.

Brenda Sanders-Wise, executive director of the Tarrant County Black Historical and Genealogical Society, a group that Lee was a charter member of, said Lee has a penchant for describing herself as “just a little old lady in tennis shoes getting in everybody’s business.” Sanders-Wise can think of a few other ways to describe her.

“She’s an advocate, an activist, a leader, a strategist and a shrewd tactician, that’s who Opal Lee is to me,” Sanders-Wise said.

“I call her an agent of change.”