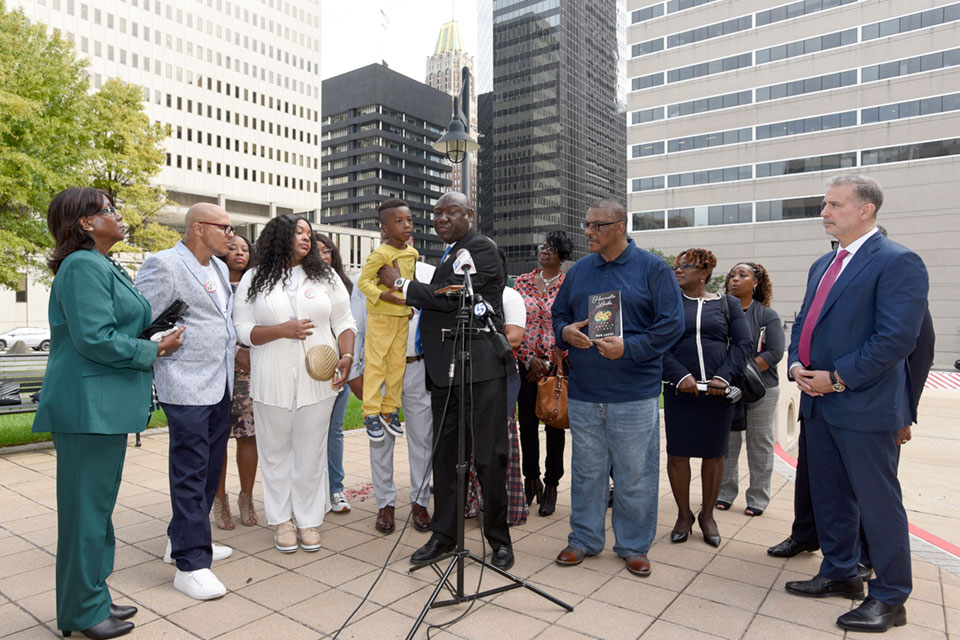 COLLEGE PARK, Md. (AP) — The estate of Henrietta Lacks sued a biotechnology company on Monday, accusing it of selling cells that doctors at Johns Hopkins Hospital took from the Black woman in 1951 without her knowledge or consent as part of “a racially unjust medical system."

Tissue taken from the woman's tumor before she died of cervical cancer became the first human cells to be successfully cloned. Reproduced infinitely ever since, HeLa cells have become a cornerstone of modern medicine, enabling countless scientific and medical innovations, including the development of the polio vaccine, genetic mapping and even COVID-19 vaccines.

Lacks’ cells were harvested and developed long before the advent of consent procedures used in medicine and scientific research today, but lawyers for her family say Thermo Fisher Scientific Inc., of Waltham, Massachusetts, has continued to commercialize the results well after the origins of the HeLa cell line became well known.

“It is outrageous that this company would think that they have intellectual rights property to their grandmother’s cells. Why is it they have intellectual rights to her cells and can benefit billions of dollars when her family, her flesh and blood, her Black children, get nothing?” one of the family's attorneys, Ben Crump, said Monday at a news conference outside the federal courthouse in Baltimore.

Johns Hopkins said it never sold or profited from the cell lines, but many companies have patented ways of using them. Crump said these distributors have made billions from the genetic material “stolen” from Lacks' body. 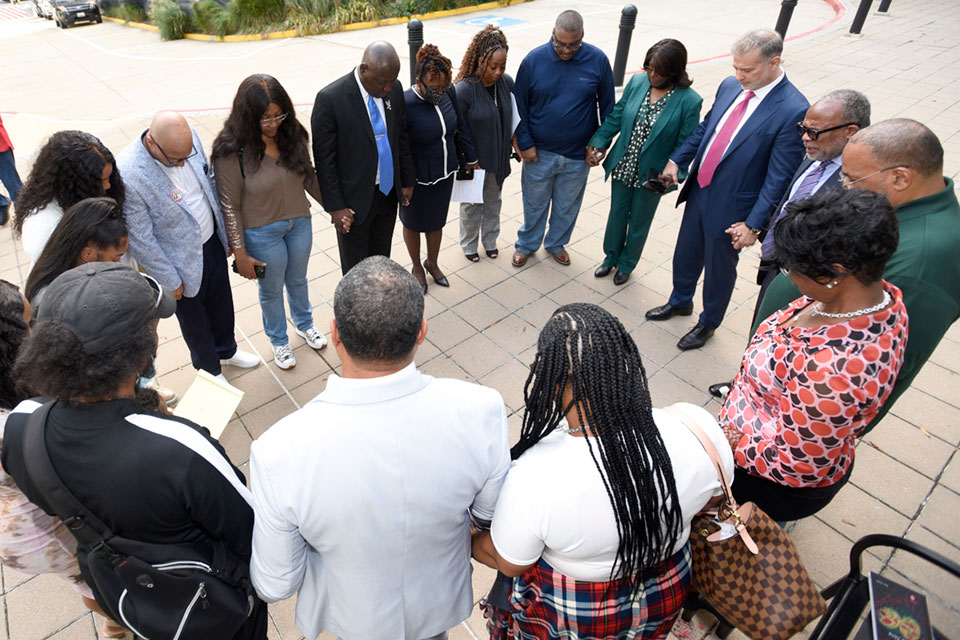 Descendants of Henrietta Lacks, whose cells, known as HeLa cells, have been used in medical research without her permission, say a prayer with attorneys outside the federal courthouse in Baltimore, Monday, Oct. 4, 2021. They announced during a news conference that Lacks' estate is filing a lawsuit against Thermo Fisher Scientific for using HeLa cells. (AP Photo/Steve Ruark)

Another family attorney, Christopher Seeger, hinted at related claims against other companies.

Thermo Fisher Scientific "shouldn’t feel too alone because they’re going to have a lot of company soon,” Seeger said.

On its website, the company says it generates approximately $35 billion in annual revenue. A company spokesman reached by telephone didn’t immediately comment on the lawsuit.

HeLa cells were discovered to have unique properties. While most cell samples died shortly after being removed from the body, her cells survived and thrived in laboratories. This exceptional quality made it possible to cultivate her cells indefinitely — they became known as the first immortalized human cell line — making it possible for scientists anywhere to reproduce studies using identical cells.

The remarkable science involved — and the impact on the Lacks family, some of whom suffered from chronic illnesses without health insurance — were documented in a 2010 bestselling book, “The Immortal Life of Henrietta Lacks.” Oprah Winfrey portrayed her daughter in an HBO movie about the story. The lawsuit was filed exactly 70 years after the day she died, on Oct. 4, 1951.

“The exploitation of Henrietta Lacks represents the unfortunately common struggle experienced by Black people throughout history,”

the suit says. “Indeed, Black suffering has fueled innumerable medical progress and profit, without just compensation or recognition. Various studies, both documented and undocumented, have thrived off the dehumanization of Black people.”

Shobita Parthasarathy, a University of Michigan professor of public policy who has researched issues around intellectual property in biotechnology, said the lawsuit comes at a time when Lacks’ family is likely to have a sympathetic audience for their claims.

“We are at a moment, not just after the murder of George Floyd but also the pandemic, where we have seen structural racism in action in all sorts of places,” she said. “We keep talking about a racial reckoning, and that racial reckoning is happening in science and medicine, as well.”

A group of white doctors at Johns Hopkins in the 1950s preyed on Black women with cervical cancer, cutting away tissue samples from their patients’ cervixes without their patients’ knowledge or consent, the lawsuit says.

Johns Hopkins Medicine says it reviewed its interactions with Lacks and her family over more than 50 years after the 2010 publication Rebecca Skloot’s book. It says it “has never sold or profited from the discovery or distribution of HeLa cells and does not own the rights to the HeLa cell line,” but it has acknowledged an ethical responsibility.

Crump, a Florida-based civil rights attorney, has risen to national prominence representing the families of Trayvon Martin, Michael Brown, Breonna Taylor and George Floyd -- Black people whose deaths at the hands of police and vigilantes helped revitalize a national movement toward police reform and racial justice.

Seeger, a New Jersey-based corporate litigator, has represented thousands of former NFL players in a class action settlement over concussions and was a lead negotiator of Volkswagen's $21 billion diesel emissions settlement with car owners. 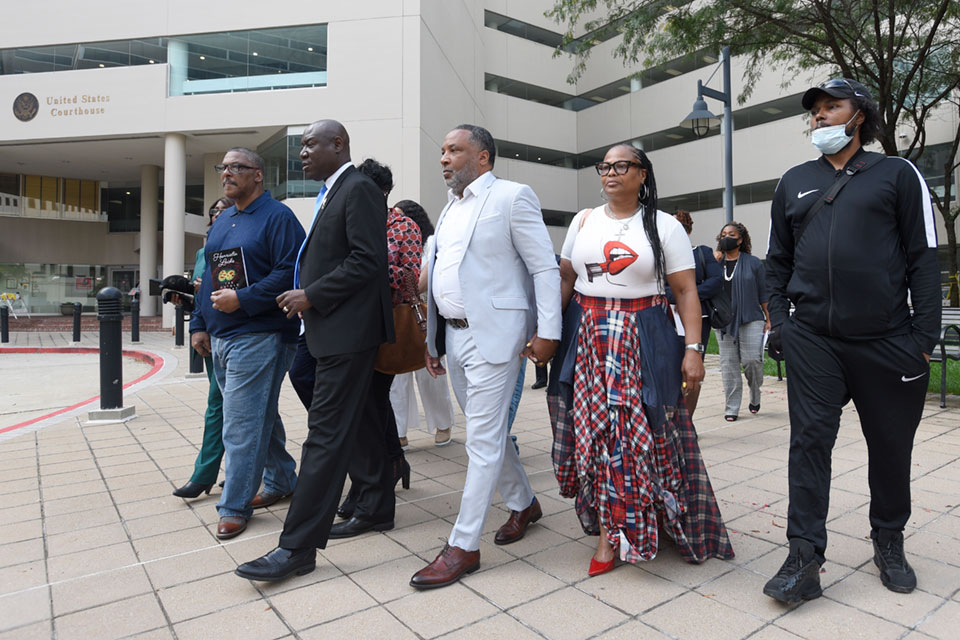 Attorney Ben Crump, second from left, walks with Ron Lacks, left, Alfred Lacks Carter, third from left, both grandsons of Henrietta Lacks, and other descendants of Lacks, whose cells have been used in medical research without her permission, outside the federal courthouse in Baltimore, Monday, Oct. 4, 2021. They announced during a news conference that Lacks' estate is filing a lawsuit against Thermo Fisher Scientific for using Lacks' cells, known as HeLa cells. (AP Photo/Steve Ruark)

One of Henrietta Lacks’ grandsons, Lawrence Lacks Jr., said at Monday’s news conference that the family is “united” behind the case.

“It’s about time,” said another grandson, Ron Lacks. “Seventy years later, we mourn Henrietta Lacks, and we will celebrate taking back control of Henrietta Lacks’ legacy. This will not be passed on to another generation of Lackses.”