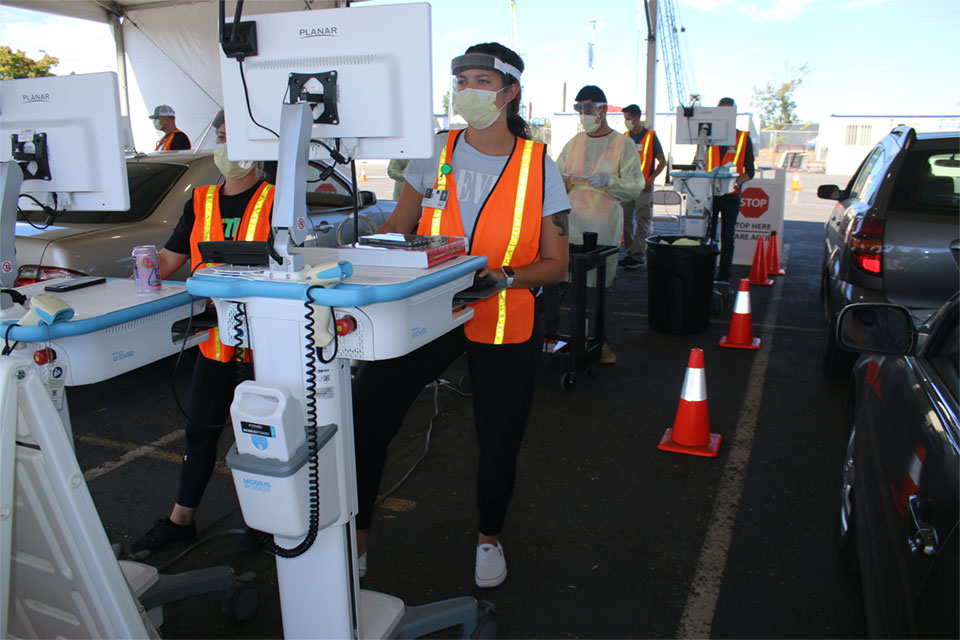 BOISE, Idaho (AP) — A constant barrage of misinformation has Idaho health care workers facing increased animosity from some patients and community members, officials say. It's gotten so bad in northern Idaho that some Kootenai Health employees are scared to go to the grocery store if they haven't changed out of their scrubs, said hospital spokeswoman Caiti Bobbitt on Tuesday.

Some doctors and nurses at the Coeur d'Alene hospital have been accused of killing patients by grieving family members who don't believe COVID-19 is real, Bobbitt said. Others have been the subject of hurtful rumors spread by people angry about the pandemic.

“Our health care workers are almost feeling like Vietnam veterans, scared to go into the community after a shift,” Bobbitt said.

Similar instances are happening across the state, said Brian Whitlock, president of the Idaho Hospital Association.

“We've had reports of physical violence, verbal abuse, demands for alternative treatment that are not acceptable or approved. And those become very difficult conversations to have as the patient continues to decompensate," Whitlock said. “We’re not frustrated with the misinformed."

"We’re frustrated with those who propagate the misinformation because it’s costing people their lives."

Misinformation remains rampant in Idaho. Some far-right state lawmakers, political organizations and local leaders — including a pathologist who was recently appointed to the public health board for the state's most populated region — have been dismissive of COVID-19 vaccines, pushed the use of an anti-parasitic drug to treat coronavirus despite potentially harmful side effects and little evidence it helps, and wrongly claimed that coronavirus case numbers are being inflated.

The effects of misinformation

Meanwhile, the entire state entered “crisis standards of care” earlier this month, authorizing health care rationing for hospitals overwhelmed by a flood of COVID-19 patients. On Sept. 25, the state hit new records with 757 hospitalized COVID-19 patients, including 202 in intensive care unit beds and 131 on ventilators.

“It's something that we worry about every day,” Idaho Department of Health and Welfare Director Dave Jeppesen said.

The agency works to debunk coronavirus-related misinformation through weekly briefings, social media and through meetings with other agencies and organizations, he said.

He added: “We have people that are needlessly suffering in hospitals and being sick, and frankly we have people dying because of misinformation that’s out there.”

It all leads to hostility against health care providers, said Susie Keller, the CEO of the Idaho Medical Association.

“Misinformation is causing people to not get vaccinated, and then when they get very sick, misinformation is increasing animosity toward health care providers because they believe lies about what is the proper treatment for COVID,” Keller said. “I've heard some of our physicians say, they're not mad at the patients, they're angry at the folks who are spreading the misinformation — those folks absolutely bear responsibility for the deaths and disability we're seeing.”

The Idaho Department of Health and Welfare and other state agencies like the Idaho State Police have plans in place to help boost security at hospitals if necessary, Shaw-Tulloch said.

Some health care facilities have already beefed up security measures on their own. Kootenai Health recently increased security at its medical clinics because patients were becoming belligerent with staffers when they were asked to wear masks, said chief of staff Dr. Robert Scoggins.

“We also have an increased security presence around the hospital campus, especially during protests,” Scoggins said. “I mean, we had a protest outside the hospital against masks and vaccines a couple of weeks ago that the patients that were dying of COVID inside could see. I think that was awful.”

COVID-19 case numbers are expected to continue to increase in the near future, as is the number of hospitalized patients, according to projections used by the Idaho Department of Health and Welfare. The state could see as many as 1,900 hospitalizations in a single week by late November, said deputy state epidemiologist Dr. Kathryn Turner, and deaths could peak at 305 in a week.

Turning the tide is possible, said Scoggins, "but it's going to take people being able to change their minds and change their deep-seated beliefs that are based on a lot of misinformation."

It's not fun to wear a mask and avoid large groups and get vaccinated, but those measures work, Scoggins said.

“If instead of fighting against each other, everyone would follow the good science and the recommendations we have now, we wouldn't be where we are," Scoggins said. “It's a tragedy that we have health care workers who are scared to go out in the community because they are accosted by these people who are holding onto these beliefs. Until you've walked into an ICU and watched somebody suffocate to death from COVID, that's when you know it's real.”