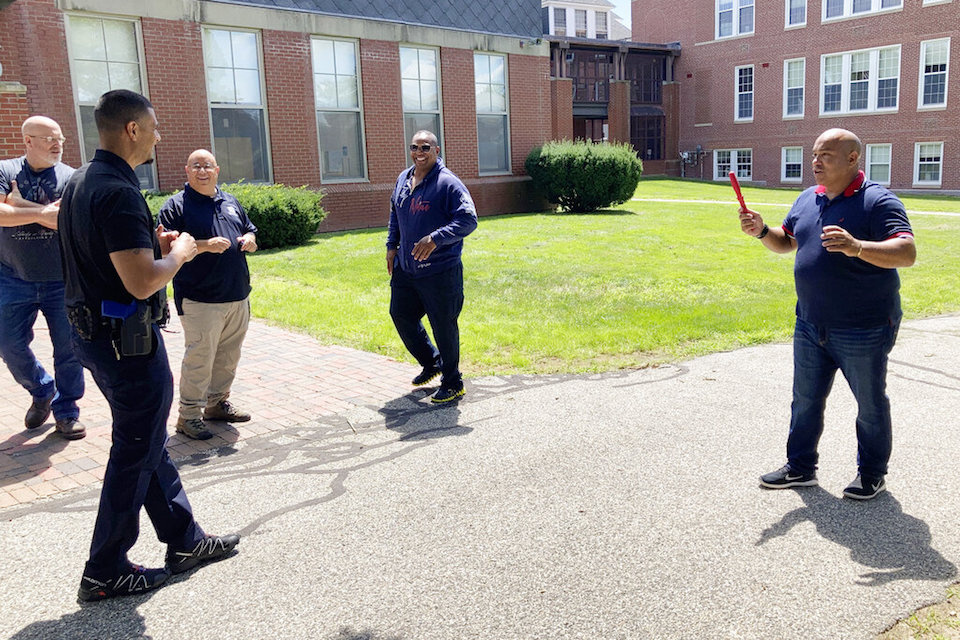 SACO, Maine (AP) — Angry over being fired, a former employee slashed the tires of his boss’ vehicle and still held the knife when police officers arrived.

Three officers positioned themselves at a safe distance as the man yelled and ranted. One officer had a stun gun, another a handgun.

The third used the most important tool — a willingness to talk.

Here in a school parking lot in Maine, the emergency was fake, but the strategies were very real.

Slow it down; stay safe

The officers were going through a training course offered by the Police Executive Research Forum that thousands of police officers around the country are receiving this year. Officers are taught: keep a safe distance, slow things down.

The organization based in Washington, D.C., is the foremost policing think tank in the country. Its two-day training now has a long waiting list.

“The most common mistake is rushing a situation that you don’t need to rush,” said Steven Stefanakos of New York City Police Department, who was brought in to help train the officers. “When you compress time and space, it usually does not go the way we want it to go.”

Goal to train all U.S. police

Police department requests for training on how to better deal with the public have skyrocketed since the death of George Floyd and the protests that followed, particularly as calls to defund police rise and cities pass reforms aimed at cracking down on police brutality.

The Police Executive Research Forum's training effort began five years ago after the shooting of Michael Brown, an unarmed black man, in Ferguson, Missouri, and has been updated since with fresh techniques. The idea had its genesis in the United Kingdom, where most officers don’t carry handguns, forum director Chuck Wexler said. It's a mix of classroom training and scenarios played out with actors to give officers time to work through what they've learned.

The goal is to take the training to as many of the nation's 18,000 law enforcement agencies as possible.

New York City announced all 36,500 officers will get the training, and all 35,000 police officers in New Jersey are being trained, as well. Smaller departments are reaching out, and the agency is doing regional sessions.

The first regional session was held in late July for officers from 90 police departments in New England, who are then expected to take what they've learned back to their departments and train other officers. There was also a session in Colorado. The latest training wrapped up Friday in Tampa.

Police officers are asked to do a lot. They’re asked to be roadside psychologists, family counselors, mental health workers — and even soldiers in an active-shooter event, said Saco Police Chief Jack Clements, whose agency hosted the event in New England.

That’s why it’s important to rehearse.

“Rather than rushing in and winding up in an encounter that’s deadly force, let’s back up, slow down, talk, formulate a plan. Then engage. If it takes an hour to de-escalate this guy, that’s fine. Take the time,” the chief said.

Some officers say the training is already saving lives.

In Texas, a police officer responded to a call for a suicidal woman with a knife a couple of weeks after receiving the training in Harris County.

The woman had rammed a vehicle in which her boyfriend was sitting and nearly hit a deputy before fleeing and locking herself in an apartment.

The first deputies on the scene kicked in the door, but Sgt. Pete Smith slowed things down and initiated a conversation when he arrived. Assured that he was there to help, the woman dropped her knife.

Instead of a violent arrest, or worse, she was taken for a mental health evaluation, said Sgt. Jose Gomez, part of the department's behavioral health training unit, who was responsible for securing the training.

In Saco, the officers spent the first day in the classroom before working through role-playing exercises on the second day. The scenarios focused on the vast majority of encounters with the public where no gun is present, but may involve knives or weapons.

In the tire-slashing scenario, the three officers kept a distance from the man who was displaying a knife. The man was a threat, they said, but not an imminent one as long as he remained at a safe distance. The three of them quickly designated the officer who would do the speaking.

Long minutes dragged by as the officer and assailant talked and commiserated, allowing the focus of the conversation to shift away from the boss. They ended up talking about customizing cars. The man put down his knife.

After the exercise, a police officer from New Haven, Connecticut, said during the debriefing that he kept the "21-foot rule” in mind.

The 21-foot distance is sometimes referred to as the “kill zone.” It’s drilled into officers that at that distance someone armed with a knife, baseball bat or other weapon can quickly close the distance and inflict deadly injuries.

Officers who want to protect themselves and survive to go home at the end of the shift are more likely to use deadly force simply because that's what they were trained to do once that distance limit is broken.

After listening in on the post-training conversation, Wexler said he was troubled by the results he's seen from what believes to be an arbitrary rule taught in police training.

“These are what you would call the lawful but awful kinds of shootings,” Wexler said.

Sometimes, he said, winning means backing away to keep a distance, instead of charging into a situation or standing one’s ground. It means taking time to assess and communicate, he said.

Raphael Thornton, who played the role of the knife-wielding assailant, said officers aren’t always sold on textbook training. But, he said, that changes with the role-playing.

“That’s when we really get the buy-in," said Thornton, who works for the Camden County Police Department in New Jersey.

"If we have any naysayers when they leave the classroom, they really buy in when they get out there. They get to put what they learned into action.”