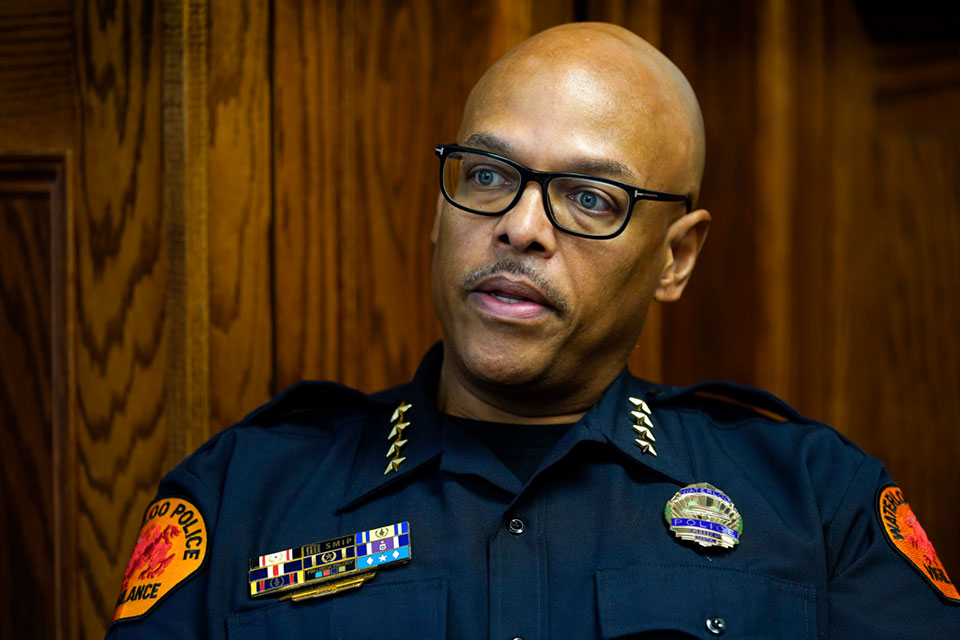 WATERLOO, Iowa (AP) — The first Black police chief in Waterloo, Iowa, is facing intense opposition from some current and former officers as he works with city leaders to reform the department, including the removal of its longtime insignia that resembles a Ku Klux Klan dragon.

Joel Fitzgerald says his 16-month tenure in Waterloo, a city of 67,000 with a history of racial divisions, is a “case study” for what Black police chiefs face as they seek to build community trust and hold officers to higher standards. In an interview with The Associated Press, he said the attacks were driven by misinformation and racism toward him and his boss, the city's first Black mayor.

“I don’t think there’s been any police chief in America in a small- or medium-sized department that have endured this for the reasons I have endured it and I think the reasons have to do with race,” said Fitzgerald, who previously served as the chief of larger departments in Fort Worth, Texas and Allentown, Pennsylvania. “This is my fourth job being the first Black police chief."

"I’ve dealt with pushback in other places but never so overt. Never so nonfactual.”

Jacinta Gau, a University of Central Florida professor and expert on race and policing, said new, reform-minded chiefs always face backlash, and that is intensified when they are Black leaders of historically white forces.

“The power dynamic in America has always been that Black people are subordinate to white people."

"When Black people acquire leadership positions, that power dynamic is flipped on its head and white people who were comfortable with the status quo are now feeling very threatened,” she said.

The backlash against Fitzgerald has intensified since last fall when the City Council began pushing to remove the department’s emblem — a green-eyed, red-bodied, winged creature known as a griffin that had adorned patches on officers' uniforms since the 1960s.

After a messy process, the council voted 5-2 last week to order the department to remove the symbol from its uniforms by the end of September.

It was the latest among several changes the department has made under Fitzgerald that have won praise from Mayor Quentin Hart, most City Council members and some community leaders — while angering the police union, retired officers and conservatives.

A white City Council member running to unseat Hart in November has portrayed herself as a champion of police while vowing to oust Fitzgerald if elected. A political action committee supporting her and other “pro-law enforcement candidates” called Cedar Valley Backs the Blue has attacked Fitzgerald and Hart on Facebook, claiming they are mismanaging the department.

Three of Fitzgerald’s predecessors as chief released a letter saying they were outraged at what the department had become under his leadership, claiming it was “imploding” and that morale had hit an all-time low. 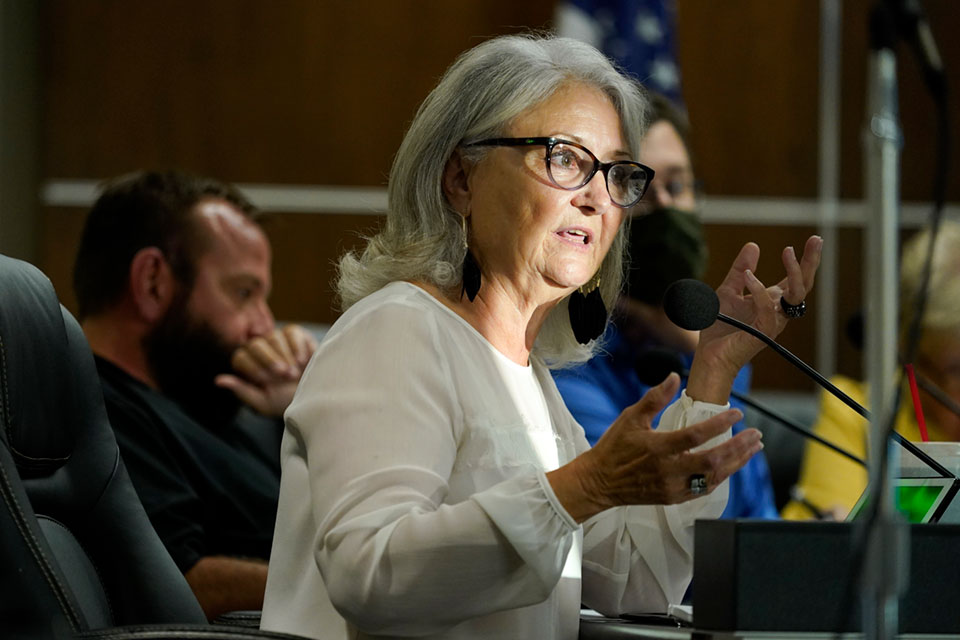 City Council member Margaret Klein speaks during a City Council meeting, Tuesday, Sept. 7, 2021, in Waterloo, Iowa. Joel Fitzgerald, the first Black police chief in Waterloo, is facing intense opposition from some current and former officers as he works with city leaders to reform the department, including the removal of its longtime insignia that resembles a Ku Klux Klan dragon. Klein, who is running for mayor, has called for Fitzgerald's resignation. (AP Photo/Charlie Neibergall)

Adding to the backlash is that Fitzgerald is an outsider to Waterloo with academic degrees some critics mock as elitist. He acknowledges “it didn't look good” when news emerged that he was a finalist for chief openings in bigger cities during his first year.

Opponents have attacked everything from Fitzgerald’s salary — which is in line with similar chiefs in Iowa — to his off-duty trips to visit family in Texas, where his teenage son continues treatment for a brain tumor that was removed in 2019.

Last year, he took over a department that has long experienced tension with the city’s Black community, which comprises 17% of the city population.

Hart said Waterloo could have been a hotbed of racial unrest after George Floyd’s death given its history, but Fitzgerald helped ease tensions the day before he was sworn on June 1, 2020, in by meeting with protesters for hours to hear their concerns.

“It was a resetting of the clock moment,” Fitzgerald said. 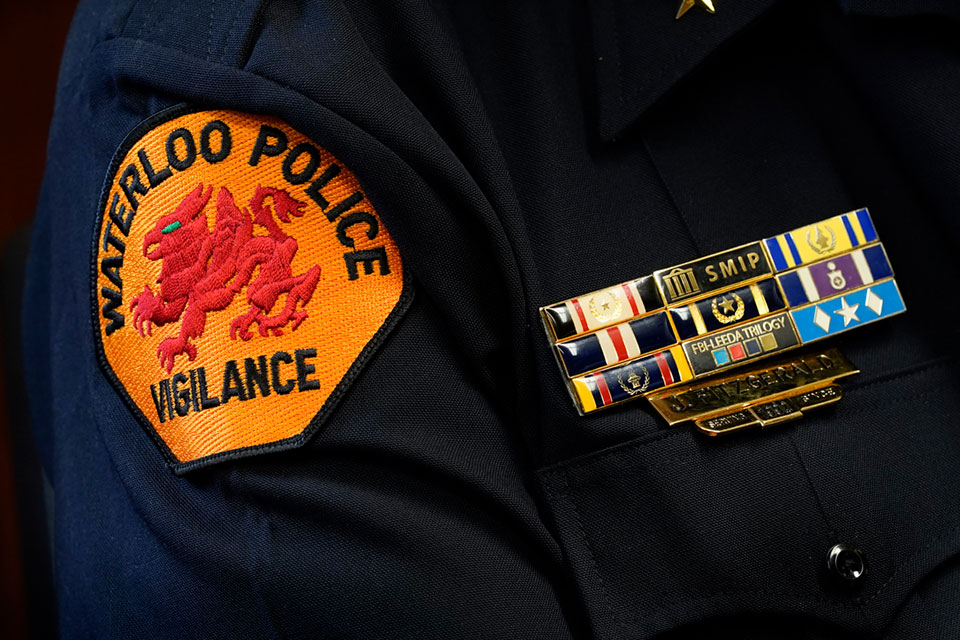 The Waterloo Police Dept. patch is seen on the arm of Chief Joel Fitzgerald as he speaks during an interview with The Associated Press, Tuesday, Sept. 7, 2021, in Waterloo, Iowa. Fitzgerald, the first Black police chief in Waterloo, is facing intense opposition from some current and former officers as he works with city leaders to reform the department, including the removal of its longtime insignia that resembles a Ku Klux Klan dragon. (AP Photo/Charlie Neibergall)

The Waterloo Commission on Human Rights called for the removal of the griffin emblem, saying it evoked fear and distrust among some given its resemblance to the KKK symbol.

But generations of Waterloo officers had seen it as a symbol of their vigilance. The Waterloo Police Protective Association, which represents officers, denied it had racist intent and mobilized against its removal.

Dealing with the opposition

Fitzgerald, one of a handful of officers of color in the 123-member department, said he was met with fierce pushback when he suggested the department rebrand itself voluntarily before the council acted.

Supporters of the griffin, including the Back the Blue group, framed its removal as an affront to officers.

“The beatdown of our police officers continues,” City Council member Margaret Klein, who is running for mayor, wrote on Facebook, citing the “devastating impact of removing the beloved 50-year patch design.” She has called for Fitzgerald's resignation. 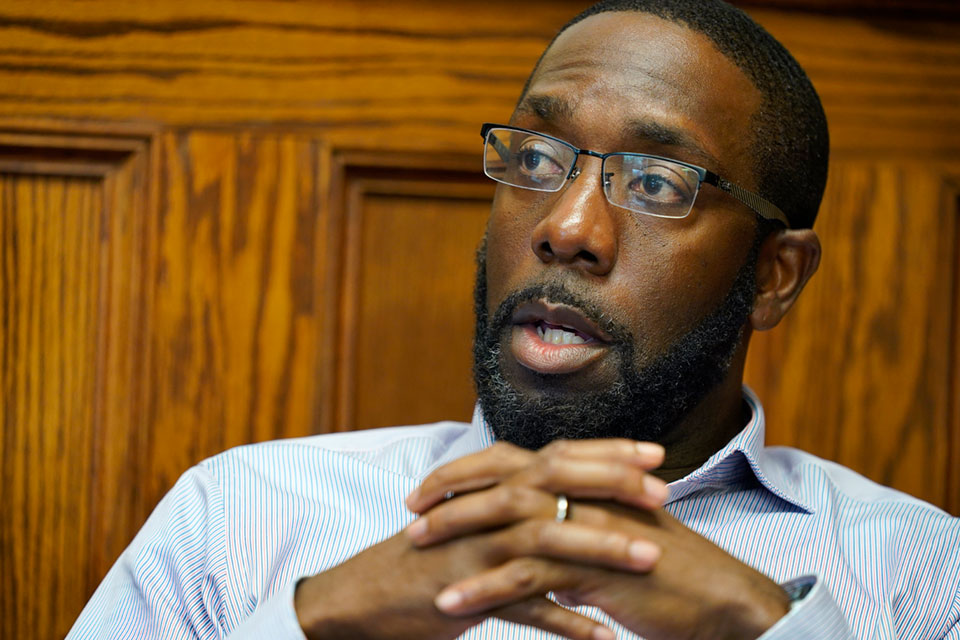 Waterloo Mayor Quentin Hart speaks during an interview with The Associated Press, Tuesday, Sept. 7, 2021, in Waterloo, Iowa. Joel Fitzgerald, the first Black police chief in Waterloo, is facing intense opposition from some current and former officers as he works with city leaders to reform the department, including the removal of its longtime insignia that resembles a Ku Klux Klan dragon. Several of the changes the department has made under Fitzgerald have won praise from Hart, most city councilors and some community leaders — while angering the police union, some retired officers and conservatives. (AP Photo/Charlie Neibergall)

Hart said the debate over the griffin missed the bigger picture. He said the department has undergone a “complete paradigm shift,” adopting a community policing model that has been popular.

The Back the Blue group has labeled Hart a “radical mayor” and released an anonymous survey taken by half the current officers and dozens of retirees showing all 98 believed Fitzgerald was the wrong man for the job. Officers complained that they didn't feel supported by the community or the administration.

“It’s sad and it’s pathetic but this is what’s going on at the Waterloo Police Department,” said group chairman Lynn Moller, a retired investigator.

Fitzgerald said officer morale is a national problem and Waterloo has eight vacancies after some officers retired or left for other jobs. He proposed a strategic plan to improve morale and hire more officers in coming years.

“We are grappling with the very real issues that have long been embedded of race and force and policing,” he said. “I get that some people have never had to reckon with that until now. I get that it's uncomfortable."