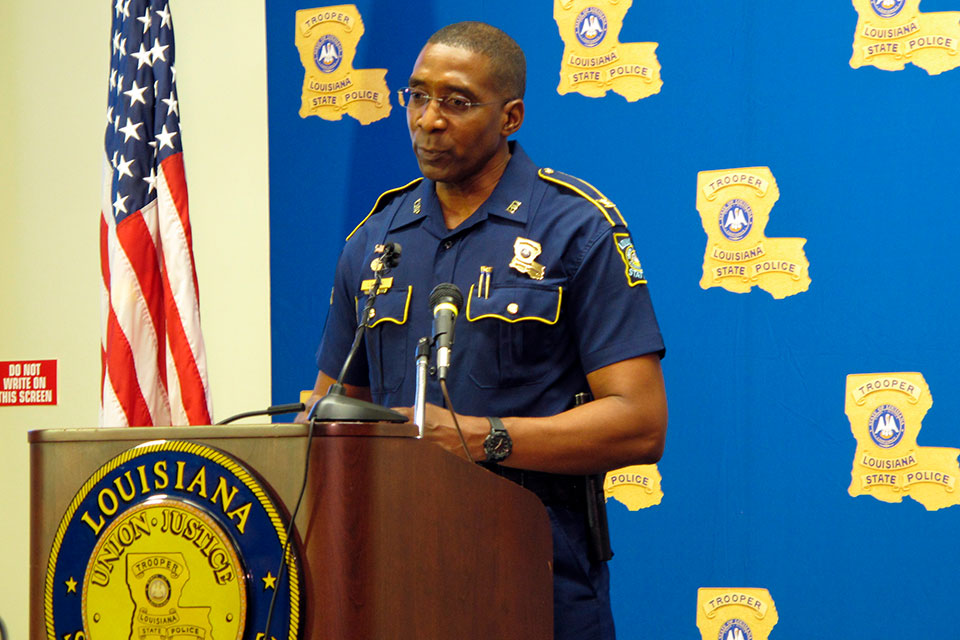 BATON ROUGE, La. (AP) — The head of the Louisiana State Police said Friday he wants to know why 67% of his agency’s uses of force in recent years have been directed at Black people, and would welcome a U.S. Justice Department “pattern and practice” probe into potential racial profiling if that is deemed necessary.

Davis’ comments came a day after an AP investigation identified at least a dozen cases over the past decade in which state police troopers or their bosses ignored or concealed evidence of beatings, deflected blame and impeded efforts to root out misconduct. It included several newly obtained body camera videos of violent arrests that had been locked away for years.

“It challenged me emotionally, not just from a law enforcement perspective but as a citizen,” Davis said of viewing the footage. "But I have to put my emotions in check and understand what my duties are.”

“I don’t want the community thinking we’re going to ‘get them.’

"Those are the types of things I’m trying to get to the root of.”

At an earlier news conference in Baton Rouge, Davis pointed to a series of reforms he has pushed through during his 11 months as state police superintendent, including new policies and practices for how his agency handles cases of excessive force. He also said he’s looking to hire an outside agency to carry on the work of a secret panel the state police had set up to determine whether troopers systematically abused Black motorists. He acknowledged the panel was shut down in July following leaks about its work.

Feds not necessary, but welcome

Davis, in the interview, said he did not believe excessive force has become widespread enough among state troopers to warrant a pattern and practice investigation by the Justice Department. However, he said he wants the opportunity to correct the agency’s issues before federal authorities intervene, pointing to the benefits of hiring an outside firm to conduct a comparable review.

“With regards to the Justice Department, if they decide that they’re going to come in and assess us on that then I welcome it,” Davis said in the news conference. “I’m not going to wait on them.

"I’m already in contact with other organizations to look at my agency and help us become better.”

Soon after Davis's news conference, U.S. Rep. Troy Carter joined a growing chorus of officials and activists calling on Attorney General Merrick Garland to to intervene. The Justice Department launched pattern and practice investigations earlier this year in Minneapolis, Louisville and Phoenix but has not said whether it’s considering a similar probe in Louisiana.

“It is clear that the LSP will not clean up its own house ... I have no faith they are capable of policing themselves,” Carter, a New Orleans Democrat, said in a statement.

The state police have been under intense scrutiny since May when the AP published previously unreleased body camera footage of the fatal 2019 arrest of Ronald Greene on a north Louisiana roadside, a death troopers initially blamed on injuries from a car crash. The footage showed troopers stunning, punching and dragging the Black motorist and leaving him prone on the ground for more than nine minutes.

Davis also confirmed Friday that an internal investigation resulted in no discipline against Lt. John Clary, the highest ranking official at the scene of Greene’s death, who was accused of denying the existence of his own body camera video for nearly two years. Davis said the agency “could not say for sure whether” he “purposefully withheld” the footage. 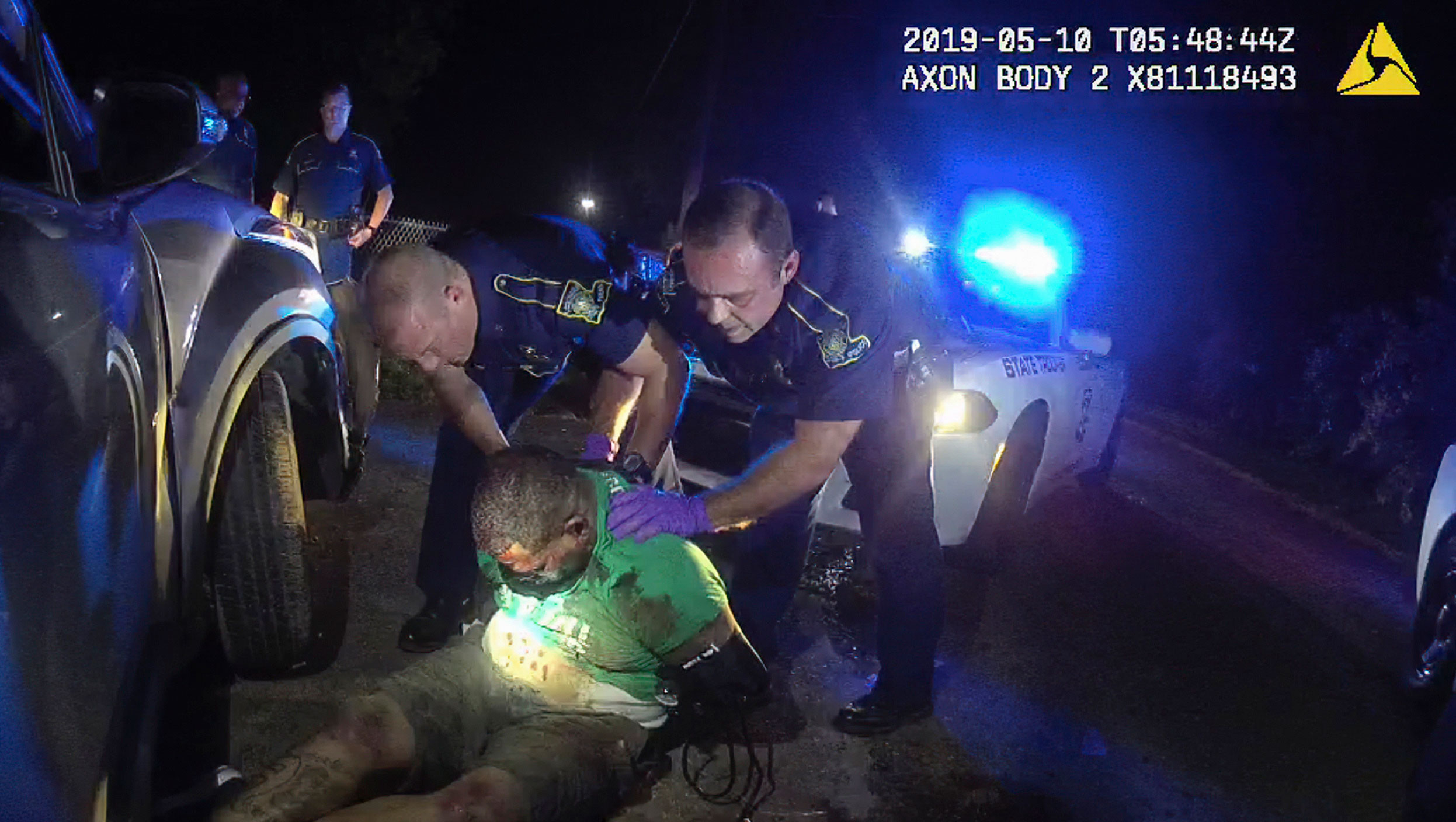 In this May 10, 2019 image from Louisiana State Trooper Dakota DeMoss’ body camera, troopers hold Ronald Greene before paramedics arrived outside of Monroe, La. The video shows Louisiana state troopers stunning, punching and dragging Greene as he apologizes for leading them on a high-speed chase. (Louisiana State Police via AP, File)State police this week also removed Clary from the duty of escorting the Louisiana Tech football coach at games as the FBI investigates the role in Greene’s deadly arrest.

Clary served in the unpaid role for at least nine years, according to the university, and escorted the Bulldogs’ head coach Skip Holtz on Saturday during a televised game against Mississippi State. His appearance at the game, first reported by WBRZ-TV, drew criticism from civil rights activists who accused Louisiana Tech of overlooking the severity of the allegations Clary faces.

Clary and his attorney did not return messages seeking comment.

Davis also sought to play down a meeting on May 20 — the day after AP published graphic footage of Greene’s death -- in which state police brass traveled to Ruston to review the long-concealed body camera video with John Belton, the Union Parish district attorney. Belton became so concerned with the circumstances of Greene’s death two years ago that he referred the case to federal authorities, who began a civil rights investigation.

The command staff made the case during the meeting that the troopers’ actions had been justified during Greene’s arrest, according to several people familiar with the meeting, which itself has become the subject of a federal investigation into possible obstruction of justice. But Davis on Friday insisted he had not asked Belton “or any other official to not pursue charges on any of my employees” in Greene’s death.

“I would never do that,” Davis said. “I have never done that.”

Bleiberg reported from Dallas and Mustian from New York.