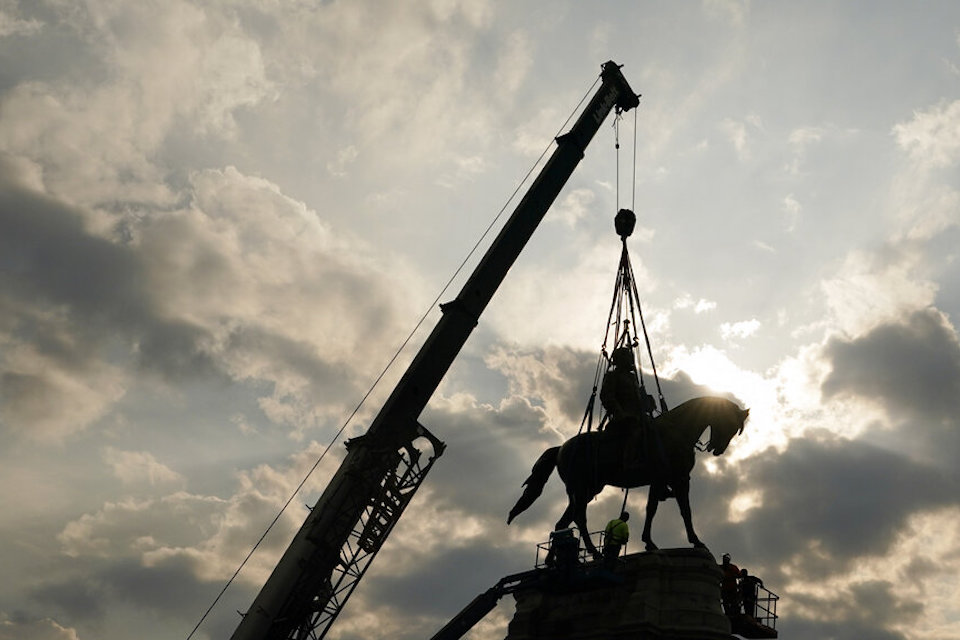 RICHMOND,, Va. (AP) — Workers at the site in Virginia's capital where a statue of Confederate Gen. Robert E. Lee was taken down this week installed a new time capsule Saturday within the statue's massive pedestal, after efforts to locate an 1887 capsule were suspended.

The capsule's installation, which a state government official confirmed was completed Saturday morning, contains remembrances of current events, including those related to COVID-19 and protests over racial injustice.

It was demonstrations last year over racism and police brutality nationwide — including in Richmond — following the police killing of George Floyd in Minneapolis that led Virginia Gov. Ralph Northam to order the removal of the enormous Lee statue. The statue was taken down Wednesday, almost a week after the Virginia Supreme Court cleared the way with a decision involving litigation that had blocked the removal.

Crews had spent much of Thursday locating without success the late-19th century capsule that state officials believe was buried within the pedestal, removing massive stones. The search didn't continue. The reassembly of the pedestal was completed by Saturday afternoon, according to Dena Potter, a spokeswoman for the state agency managing the job.

The Lee statue was one of five Confederate tributes along Richmond’s Monument Avenue and the only one that belonged to the state. The four city-owned statues were taken down last summer. State officials plan to leave the Lee pedestal in place, at least for now, with the expectation that a community-involved rethinking of Monument Avenue will kick off soon.

The new capsule contained items such as an expired vial of the Pfizer COVID-19 vaccine, a Black Lives Matter sticker and a photograph of a Black ballerina with her fist raised near the Lee statue during last summer’s protests in Richmond.