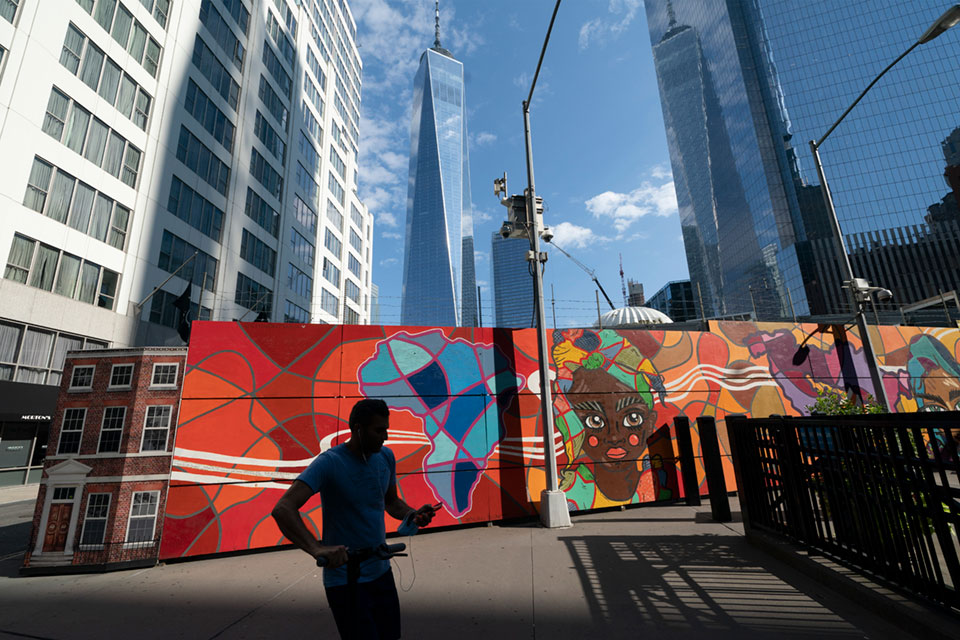 NEW YORK (AP) — Two decades after its destruction in the Sept. 11 attacks, the work to rebuild the World Trade Center complex remains incomplete.

Two planned skyscrapers, a performing arts center and a church are still unfinished at the site, which plays host Saturday to the annual ceremony honoring nearly 3,000 people killed in the attacks.

Visitors to the commemoration will find a place that no longer has the feel of a construction zone, though, even as the work continues.

The memorial plaza with its twin reflecting pools opened in 2011. One World Trade Center — the spire originally known as the Freedom Tower — opened in 2014, as did the National Sept. 11 Memorial and Museum. An underground transit hub and shopping mall opened in 2016. Three other glassy towers built to replace those lost in the attack are open.

Cranes and construction fences, however, can still be seen around the site. Here is a look at the unfinished work:

Planned as the second tallest skyscraper at the site, 2 World Trade Center, might someday reach 80 stories. But for now, just a low stump of a building exists as a placeholder, covered with colorful graffiti-style murals at the northeast corner of the Trade Center site.

Developer Larry Silverstein has said he wants to sign an anchor tenant for the tower before starting construction. 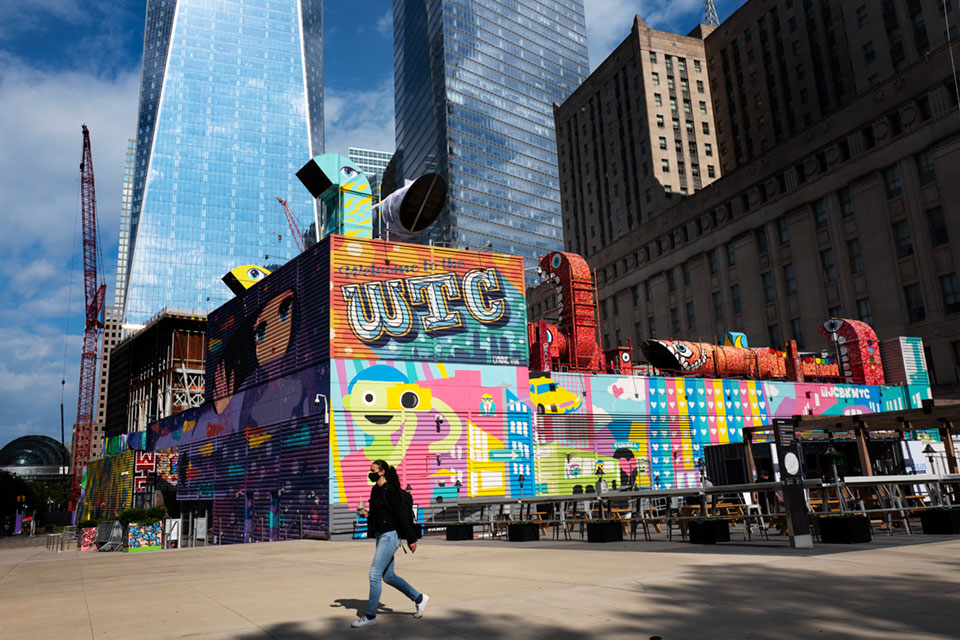 A woman walks by the colorful murals that surround the foundation for 2 World Trade Center, Wednesday, Sept. 8, 2021 in New York. Planned as the second tallest skyscraper at the site, 2 World Trade Center, might someday reach 80 stories. Developer Larry Silverstein has said he wants to sign an anchor tenant for the tower before starting construction. (AP Photo/Mark Lennihan)

Despite the coronavirus pandemic emptying out office buildings, the now-90-year-old says he is confident a tenant will be found so the Norman Foster -designed tower can be built in his lifetime.

“At the end of the day, my goal is to put the shovel in the ground as soon as possible, and complete the rebuilding project we started 20 years ago,” Silverstein said in an emailed statement.

After years of delays, the Ronald O. Perelman Performing Arts Center is under construction just to the west of 2 World Trade Center's future site and is scheduled to open in 2023.

While a performance center was part of World Trade Center master planner Daniel Libeskind's original scheme, disputes over its budget and design threatened its viability in the years after Frank Gehry and the Norwegian firm Snøhetta were tapped to design it in 2004.

In 2015, the center's leaders announced a new team of architects, Joshua Ramus of Rex Architecture P.C. plus the firm Davis Brody Bond, who have designed a translucent glass and marble cube. 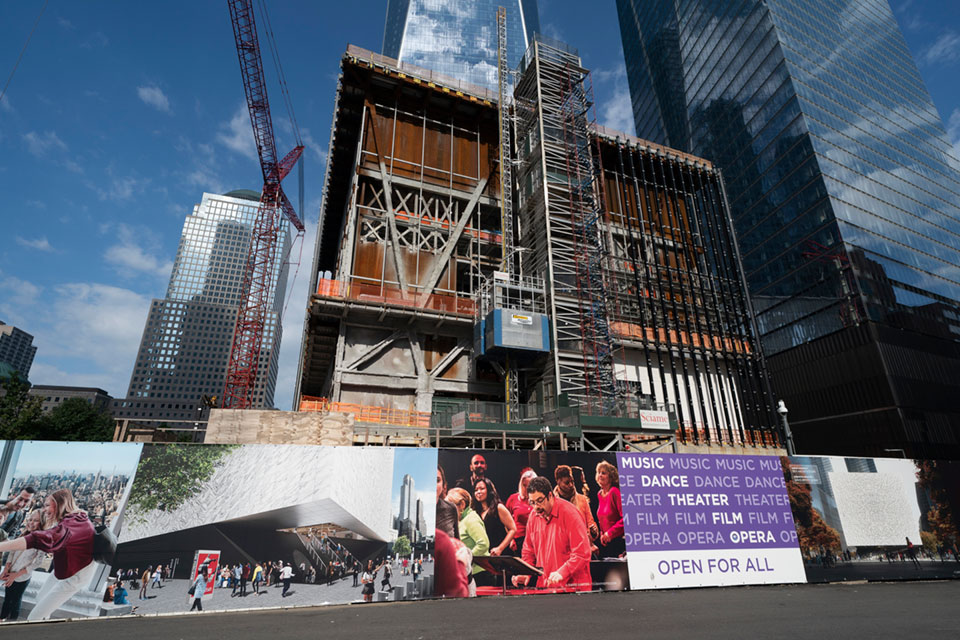 The Ronald O. Perelman Performing Arts Center is under construction, Wednesday, Sept. 8, 2021, at the World Trade Center in New York. After years of delays it is scheduled to open in 2023. (AP Photo/Mark Lennihan)

Once finished, the arts center's top floor will house a flexible set of spaces that can be configured into one, two or three theaters for drama, dance, film and music. Free performances will take place on a small stage on the lobby level.

“All of the components are automated, so the walls move, the floor and the seats move,” said the center’s president, Leslie Koch.

Perelman, the banker and investor, secured naming rights with a $75 million donation. Besides that gift, the $500 million center is being built with private donations and $100 million from the Lower Manhattan Development Corp., the agency created after the attacks to spur redevelopment. Former New York City Mayor Mike Bloomberg is the chair of the board and a donor.

The long-delayed construction of the St. Nicholas Greek Orthodox Church and National Shrine, replacing the only house of worship destroyed in the attacks, is now proceeding briskly after years of delays.

The building, designed by architect Santiago Calatrava, is going up near the southeast corner of ground zero and will look down on the memorial plaza from a perch atop another building that holds the entrance to the World Trade Center's underground garage. 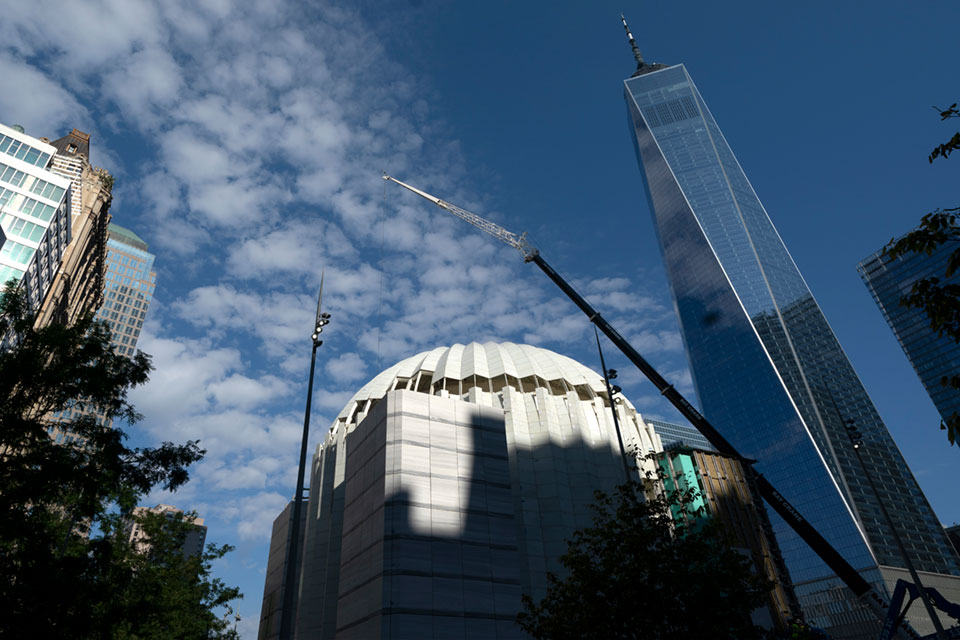 The St. Nicholas Greek Orthodox Church and National Shrine, center, is nearing completion, Wednesday, Sept. 8, 2021, at the World Trade Center in New York. The construction of the only house of worship destroyed in the attacks of September 11, 2001, is now proceeding briskly after years of delays. (AP Photo/Mark Lennihan)

Slated for completion next year, the church is surrounded by a small public park and features a Byzantine-style dome and marble cladding that can be lit from within.

The project was first delayed by a dispute over location between the Greek Orthodox Archdiocese of America and the Port Authority of New York and New Jersey, which owns the trade center. Then, project costs soared and construction halted in late 2017 after the archdiocese fell behind on payments.

A new entity, Friends of St. Nicholas, led by a core of wealthy Greek Americans, assumed management on behalf of the archdiocese and raised the remaining funds. Construction resumed in August 2020, with final cost estimates of close to $85 million.

The archdiocese plans a lighting ceremony on Sept. 10 at the unfinished building.

Construction has yet to begin on the tower that will replace an office building, occupied by Deutsche Bank, that was was damaged and contaminated by debris from the collapsing twin towers. The original building was demolished between 2007 and 2011 — a job that came with its own tragedy. Two firefighters died in the building during a 2007 fire.

The LMDC and the Port Authority of New York and New Jersey in recent years chose a partnership led by Brookfield Properties and Silverstein Properties to develop the now-cleared land as a 900-foot (270-meter) tower with office and retail space in addition to 1,325 apartments.

“We expect if everything goes according to plan that that building should be complete within about five years,” said Silverstein Properties' marketing executive Dara McQuillan.