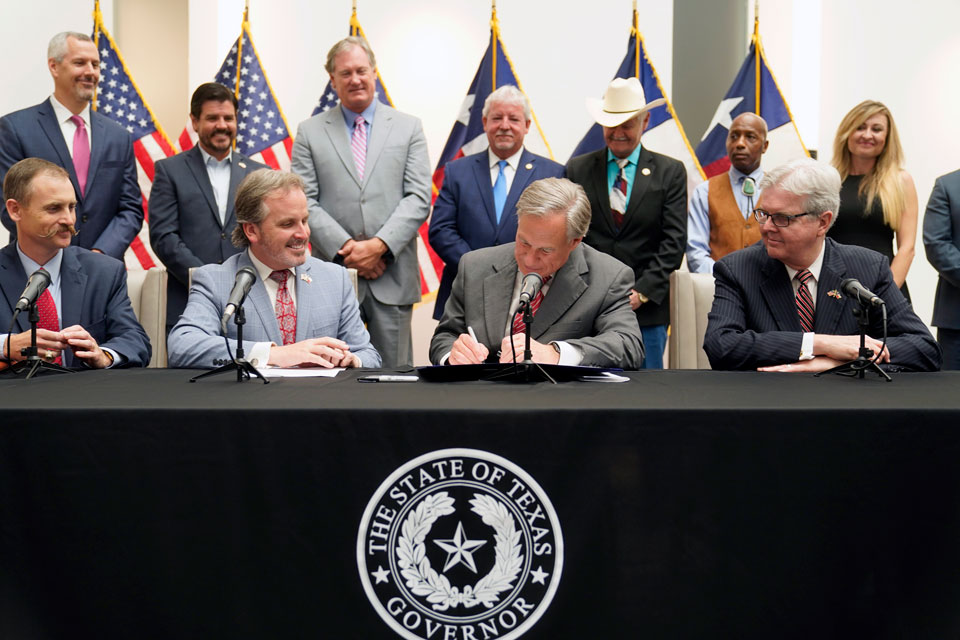 Abbott signed the sweeping changes during a ceremony in the East Texas city of Tyler, where the surrounding county went for former President Donald Trump by a more than 2-to-1 margin last year. But it was far closer in Texas overall, with Trump carrying the state by 5 1/2 points, the thinnest margin of victory by a GOP presidential nominee here in decades.

The bill signing again underlined the hard right turn Texas Republicans made this year, including a new state law that took effect last week banning most abortions. Abbott said he chose Tyler because it was home to the bill's author, Republican Sen. Bryan Hughes, who also carried the new abortion restrictions.

Already, the rewrite of Texas' voting laws are the target of at least three federal lawsuits — including another filed Tuesday — and all contend the changes will have a disproportionate impact on minorities. Abbott and other Republicans say it expands access by increasing the minimum number of early voting hours, but the law also puts new restrictions on late-night voting.

“I feel extremely confident that when this law makes it through the litigation phase, it will be upheld," Abbott said. “Because exactly what we've said, it does make it easier for people to be able to go vote. No one who is eligible to vote will be denied the opportunity to vote.”

Texas is among at least 18 states that have enacted new voting restrictions since the 2020 election, according to the Brennan Center for Justice.

The laws are part of a national GOP campaign, including in Florida, Georgia and Arizona, to tighten voting laws in the name of security, partly driven by Trump's false claims that the election was stolen.

Opponents did not wait for Abbott's signature to begin filing lawsuits against the new Texas law known as Senate Bill 1. The American Civil Liberties Union, minority rights groups and disability advocates are part of a broad coalition that filed separate lawsuits last week in federal court in Texas, accusing Republican lawmakers of violating the federal Voting Rights Act and intentionally discriminating against minorities.

Some changes squarely take aim at Harris County in the Houston area, where President Joe Biden carried the county of 1.6 million voters last year by a 13-point margin. Amid the COVID-19 pandemic last year, Harris County elections officials offered 24-hour polling places and drive-thru voting, which are now outlawed under the new law. The county also tried sending mail-in ballot applications to more than 2 million registered voters, but going forward in Texas, any elections officials who tries sending an application to someone who doesn't request one could face criminal charges.

Partisan poll watchers are now also entitled to more movement, and election judges who obstruct them could also face criminal penalties, which Democrats argue could lead to voter intimidation.

"Texas Governor Greg Abbott has intentionally signed away democracy for so many. We are disgusted," NAACP President Derrick Johnson said in a statement.

In response to new voting restrictions in GOP-controlled statehouses, Democrats in Congress want to pass new federal voting rights protections at the federal level but have been unable to overcome opposition form Senate Republicans.

White House press secretary Jen Psaki defended Biden’s approach on voting rights, saying the president had used his bully pulpit and made Vice President Kamala Harris the point person on the issue. But Psaki said the administration planned to take additional but unspecified steps to address concerns from voting rights groups. “We would say to these advocates: we stand with you,” Psaki told reporters Tuesday aboard Air Force One. “There’s more we’re going to keep working on together.”

Abbott signed the bill 100 days after Democrats kicked off a summer of last-ditch maneuvers by walking out of the state Capitol to temporarily block the measure. That was followed by more than 50 Democrats flying to Washington, D.C., in July to thwart the bill for a second time, which led to Republicans issuing civil arrest warrants in an effort to compel Democrats to return, although no one wound up being forced to come back.

But the protests did not wind up significantly changing the bill, underscoring Republicans' determination to pass the measure and the strength of their commanding majority in the Texas Capitol.