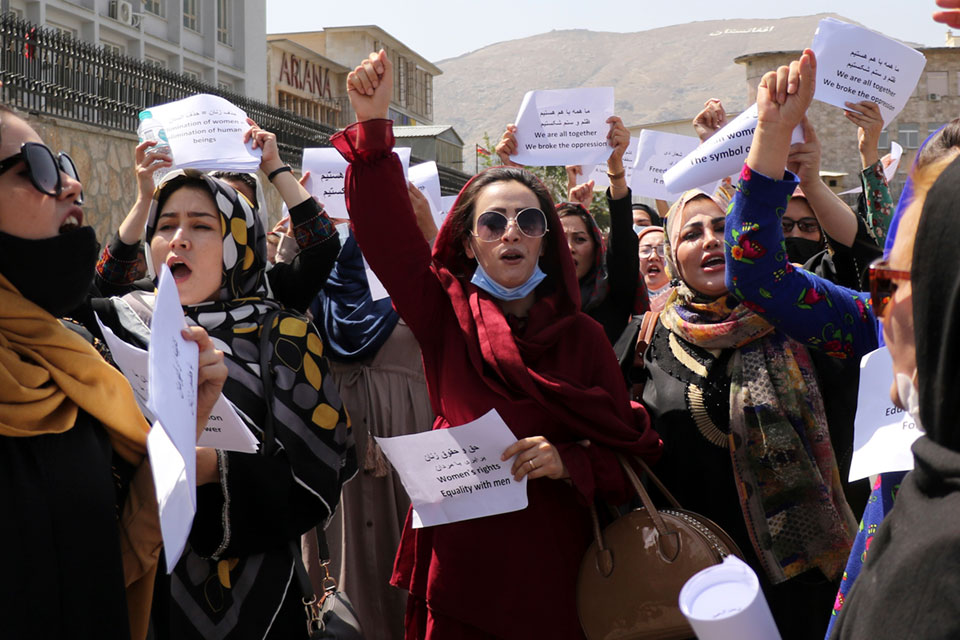 KABUL, Afghanistan (AP) — A small group of Afghan women protested near the presidential palace in Kabul on Friday, demanding equal rights from the Taliban as Afghanistan's new rulers work on forming a government and seeking international recognition.

The Taliban captured most of the country in a matter of days last month and celebrated the departure of the last U.S. forces after 20 years of war. Now they face the urgent challenge of governing a war-ravaged country that is heavily reliant on international aid.

The Taliban have promised an inclusive government and a more moderate form of Islamic rule than when they last ruled the country from 1996 to 2001. But many Afghans, especially women, are deeply skeptical and fear a rollback of rights gained over the last two decades.

The protest in Kabul was the second women's protest in as many days, with the other held in the western city of Herat. Around 20 women with microphones gathered under the watchful eyes of Taliban gunmen, who allowed the demonstration to proceed.

The women demanded access to education, the right to return to work and a role in governing the country. "Freedom is our motto. It makes us proud,” read one of their signs.

A Taliban fighter ventured into the crowd at one point, but witnesses said he was angry at the bystanders who had stopped to watch the demonstration and not the protesters themselves. 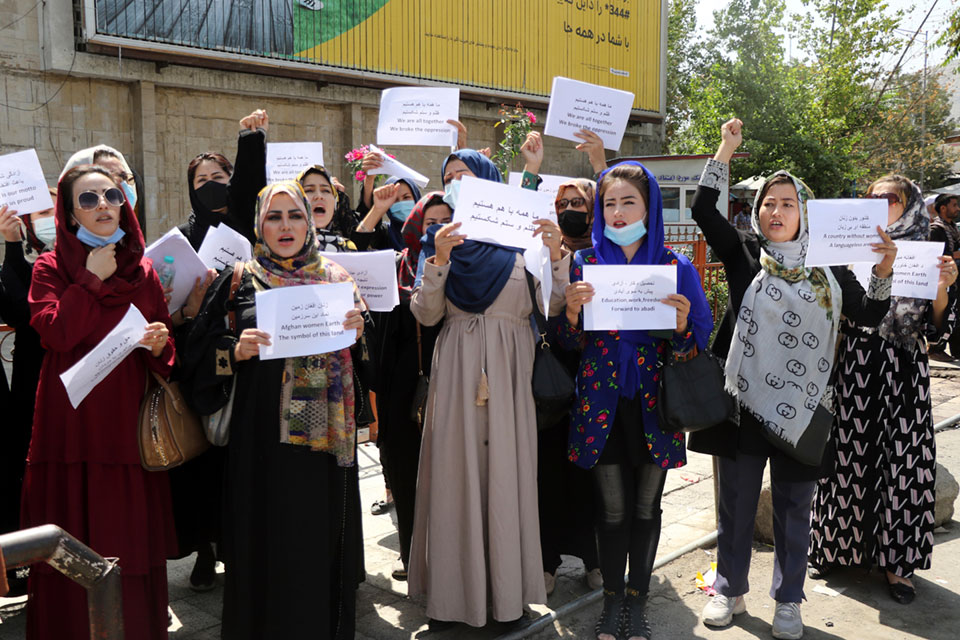 Women gather to demand their rights under the Taliban rule during a protest in Kabul, Afghanistan, Friday, Sept. 3, 2021. As the world watches intently for clues on how the Taliban will govern, their treatment of the media will be a key indicator, along with their policies toward women. When they ruled Afghanistan between 1996-2001, they enforced a harsh interpretation of Islam, barring girls and women from schools and public life, and brutally suppressing dissent. (AP Photo/Wali Sabawoon)

The Taliban have said women will be able to continue their education and work outside the home, rights denied to women when the militants were last in power. But the Taliban have also vowed to impose Sharia, or Islamic law, without providing specifics.

Interpretations of Islamic law vary widely across the Muslim world, with more moderate strains predominating. The Taliban's earlier rule was shaped by Afghanistan's unique tribal traditions, under which women are not to be seen in public. Those customs endure, especially in the countryside, even during 20 years of Western-backed governments.

A potentially more pressing concern for the Taliban is the economy, which is mired in crisis. Civil servants haven't been paid for months, ATM's have been shut down and banks are limiting withdrawals to $200 per week, causing large crowds to form outside them. Aid groups have warned of widespread hunger amid a severe drought.

The Taliban said Western Union, which halted service after the militants entered Kabul last month, will resume transfers, which may help Afghans to receive cash from relatives living abroad. But most of Afghanistan's foreign reserves are held abroad and frozen while Western nations consider how to engage with the Taliban, putting pressure on the local currency.

There was no immediate comment from Western Union on the resumption of service.

The Taliban say they want good relations with all countries, even the United States, and have held a string of meetings with foreign envoys in recent days in the Gulf nation of Qatar, where they have long maintained a political office.

Western nations are expected to demand the Taliban live up to their promises to form an inclusive government and prevent Afghanistan from being a haven for terrorist groups. They may also press the Taliban on women's rights, though that could be a harder sell for the group's hard-line base, which is steeped in Afghanistan's deeply conservative, tribal culture.

Ahmadullah Muttaqi, a spokesman for the Taliban's cultural commission, said a senior official from the United Arab Emirates flew into Kabul's international airport on Friday to meet with Taliban officials, without naming him. Afghanistan's TOLO TV reported that the aircraft was also carrying 60 tons of food and medical aid.

Sher Mohammad Stanikzai, a senior Taliban official based in Qatar, recently met with British and German delegations, according to the Taliban, which said another official, Abdul Salam Hanafi, had a phone call with Chinese deputy foreign minister Wu Jianghao. 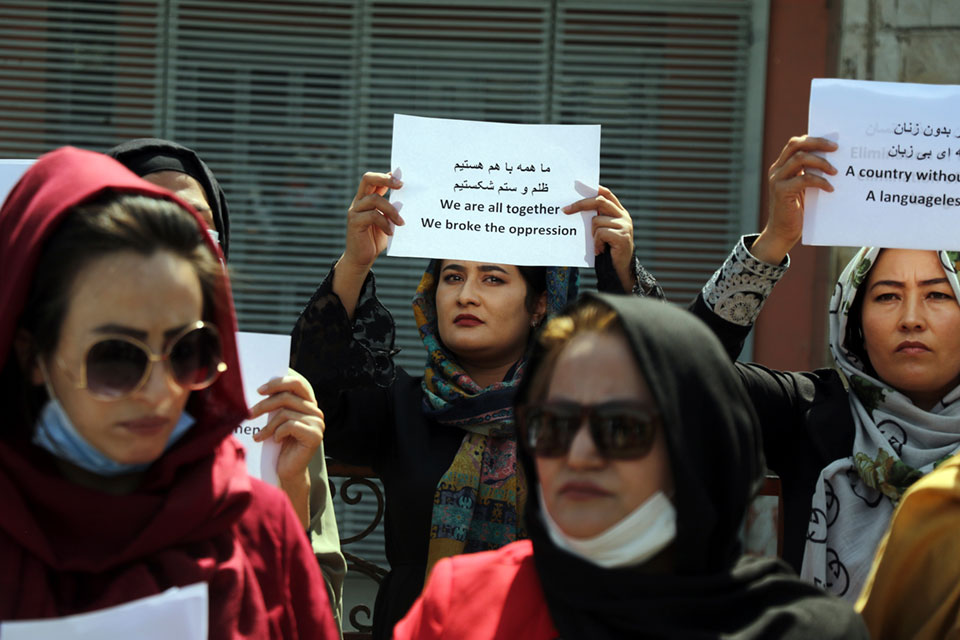 Women gather to demand their rights under the Taliban rule during a protest in Kabul, Afghanistan, Friday, Sept. 3, 2021. As the world watches intently for clues on how the Taliban will govern, their treatment of the media will be a key indicator, along with their policies toward women. When they ruled Afghanistan between 1996-2001, they enforced a harsh interpretation of Islam, barring girls and women from schools and public life, and brutally suppressing dissent. (AP Photo/Wali Sabawoon)

Most Western embassies were evacuated and shuttered in the days after the Taliban rolled into Kabul on Aug. 15. The Taliban have urged diplomats to return.

Taliban political leaders have gone on TV to say the world has nothing to fear from them. But many Afghans, as well as Western nations that spent two decades fighting the group, remain deeply skeptical.

Tens of thousands of Afghans fled the country after the Taliban takeover in a massive U.S.-led airlift out of Kabul international airport. The scenes of chaos, from Afghans clinging to military aircraft as they took off before falling to their deaths, to a suicide bombing that killed 169 Afghans and 13 U.S. service members, marked a bitter end to America's longest war.

The Taliban assumed control of the airport after the last American forces flew out and are now working to restore operations with technical experts from Qatar and Turkey. The Taliban say they will allow free travel for anyone with proper documents, but it remains to be seen whether any commercial airlines will offer service.

Officials from Pakistan International Airlines have met with Afghanistan's still-independent civil aviation administration. But Abdullah Hafeez, a spokesman for the airline, said it will take “some time” to clean up the debris and restore normal operations.

“There is still a lot of work to be done before international flights can come into the airport,” he said.