US Faith Groups Unite to Help Afghanistan Refugees After War 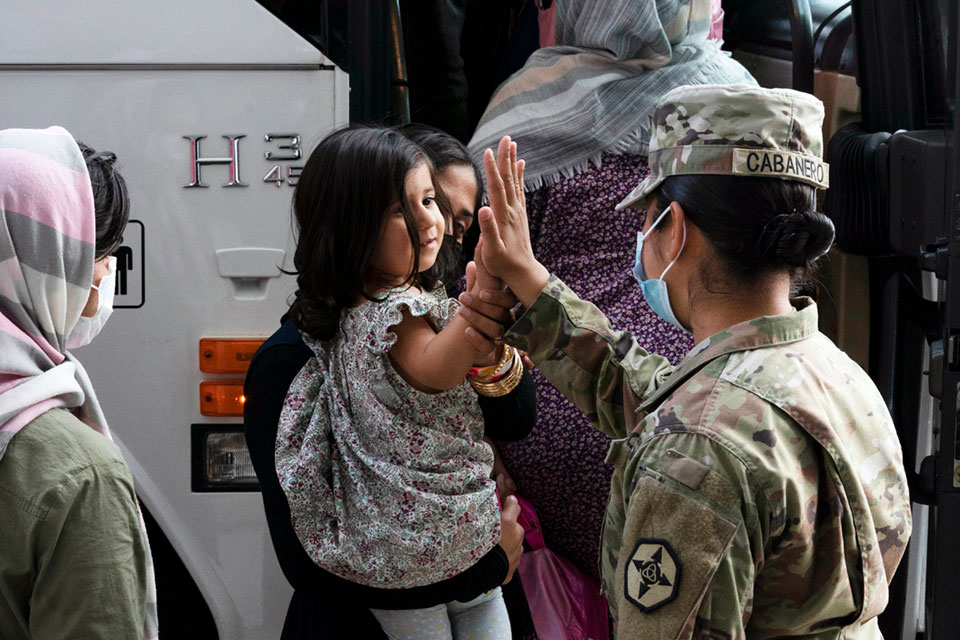 America’s major religions and denominations, often divided on other big issues, have united behind the effort to help receive an influx of refugees from Afghanistan following the end of the United States’ longest war and one of the largest airlifts in history.

Among those gearing up to help are Jewish refugee resettlement agencies and Islamic groups; conservative and liberal Protestant churches; and prominent Catholic relief organizations, providing everything from food and clothes to legal assistance and housing.

“It’s incredible. It’s an interfaith effort that involved Catholic, Lutheran, Muslim, Jews, Episcopalians ... Hindus ... as well as nonfaith communities who just believe that maybe it’s not a matter of faith, but it’s just a matter of who we are as a nation,” said Krish O’Mara Vignarajah, president and CEO of Lutheran Immigration and Refugee Service. 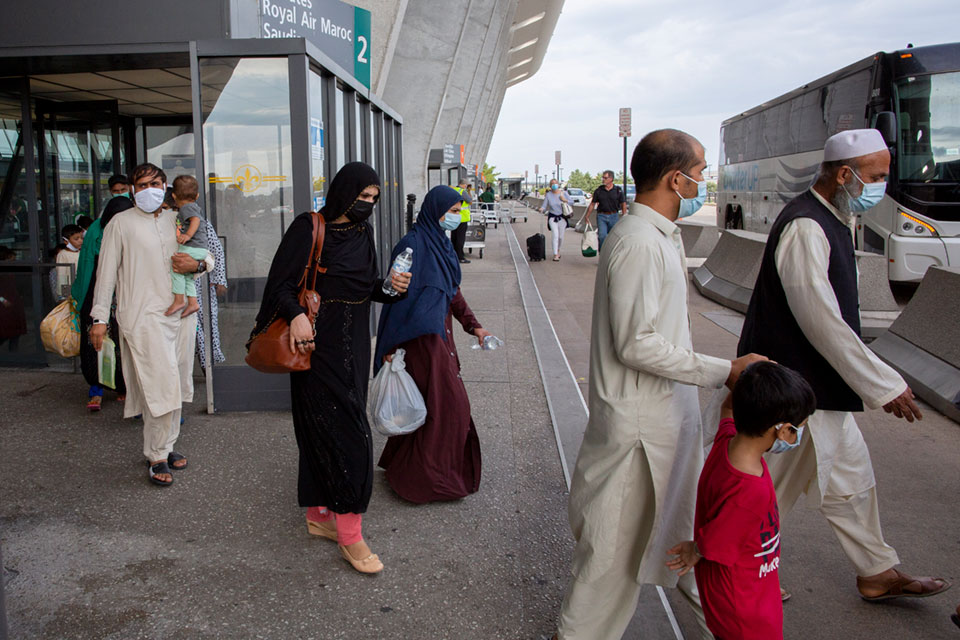 FILE - In this Tuesday, Aug. 31, 2021, file photo, families evacuated from Kabul, Afghanistan, walk to board a bus after they arrived at Washington Dulles International Airport, in Chantilly, Va. U.S. religious groups of many faiths are gearing up to assist the thousands of incoming refugees. (AP Photo/Gemunu Amarasinghe, File)

The U.S. and its coalition partners have evacuated more than 100,000 people from Afghanistan since the airlift began Aug. 14, including more than 5,400 American citizens and many Afghans who helped the U.S. during the 20-year war.

The effort by faith groups to help resettle them follows a long history of religious involvement in refugee policy, said Stephanie Nawyn, a sociologist at Michigan State University who focuses on refugee issues.

Decades before the U.S. Refugee Resettlement Program was created in 1980, faith organizations advocated for the resettlement of Jewish refugees during World War II. Religious groups also helped receive people who fled wars in Vietnam, the Balkans and elsewhere.

Besides helping distribute government resources, the groups mobilize private assets such as donations and volunteers and work with other private entities to provide supplies and housing, Nawyn said.

U.S. resettlement agencies were gutted under former President Donald Trump, who slashed refugee admissions yearly until they reached a record low. Now agencies are scrambling to expand capacity so they can handle the influx from Afghanistan.

“It’s a historic effort, and there are and have been challenges — especially after rebounding from four years of what was a war on immigration, which decimated the refugee resettlement infrastructure,” O’Mara Vignarajah said.

“Some of our local offices might have resettled 100 families throughout the entirety of last year, and they may now be looking at 100 families in the next few weeks,” she said. 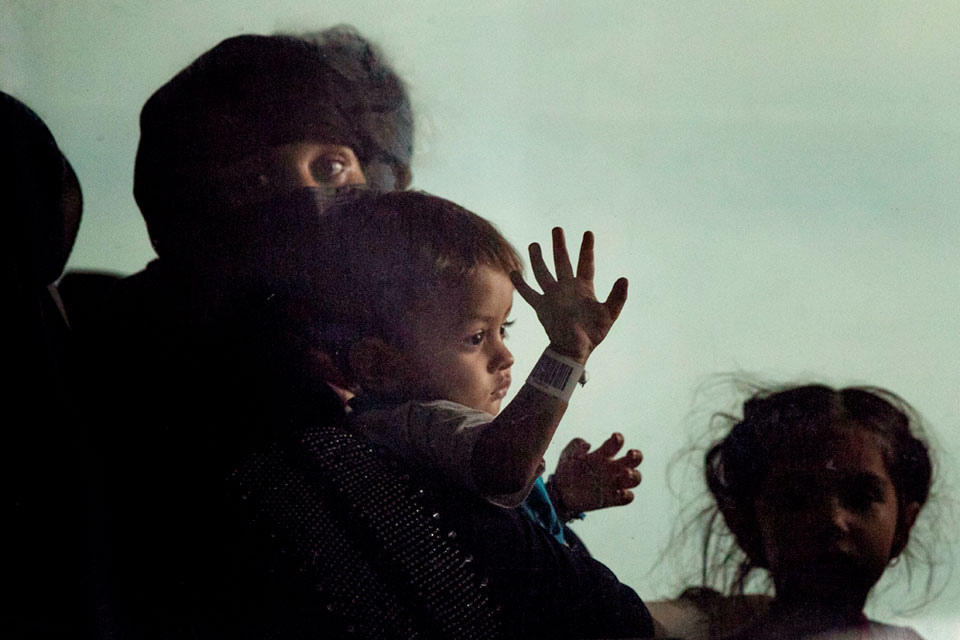 FILE - In this Tuesday, Aug. 31, 2021, file photo, families evacuated from Kabul, Afghanistan, sit onboard a bus after they arrived at Washington Dulles International Airport, in Chantilly, Va. U.S. religious groups of many faiths are gearing up to assist the thousands of incoming refugees. (AP Photo/Gemunu Amarasinghe, File)

The U.S. Conference of Catholic Bishops, Catholic Charities and other agencies have been welcoming Afghan families at U.S. military bases where they're being housed temporarily.

A major challenge is finding affordable housing in areas where Afghans have typically resettled, including California and the Washington, D.C., region.

“I’m very concerned about children, getting them into schools,” said Bill Canny, executive director of the USCCB's Migration and Refugee Services program.

World Relief, a global Christian humanitarian organization, has helped resettle about 360 Afghans in the past month and is expecting many more, said Matthew Soerens, the group's U.S. director of church mobilization.

“These are individuals in many cases who have put their lives at risk and their families' lives at risk for the people of the United States of America,” he said. “Now that they're facing the risk of retribution and retaliation from the Taliban ..."

"I think most Americans of all religious traditions see it as a moral imperative for us to keep our promise.”

Will the Taliban keep thier promise

Among the evacuees are Afghans who obtained special immigrant visas after working with the U.S. or NATO as interpreters or in some other capacity; people who have applied for the visas but not yet received them; and those who might have been particularly in danger under the Taliban.

But thousands of others who also qualified for visas have been left behind because of a backlog of applications, and faith-based groups have called on President Joe Biden’s administration to get them safely to the U.S.

“Some of the cases we are involved with have gotten out, but many have not,” said Mark Hetfield, president and CEO of the Jewish refugee agency HIAS, one of nine groups that contract with the State Department on resettlement.

“We have a girl who was literally shot by the Taliban and is now severely disabled who can’t get out," he said. "We are aware of many, many others who are trapped — and the U.S. has left them behind.”

Biden says he has tasked Secretary of State Antony Blinken to coordinate with international partners to hold the Taliban to their promise of safe passage for those who want to leave in the days ahead.

The president has historically supported receiving refugees, co-sponsoring legislation that created the government’s program in 1980. This June, for World Refugee Day, Biden said that “resettling refugees helps reunite families, enriches the fabric of America and enhances our standing, influence and security in the world.”

Ardiane Ademi, director of the Refugee Resettlement Program for Catholic Charities in the Archdiocese of Galveston-Houston, said it recently resettled several families who left Afghanistan before the airlift and is bracing for hundreds more.

John Koehlinger, executive director of Kentucky Refugee Ministries, said his agency has received two families through the special immigrant visa program and has begun receiving additional evacuees. But other families the agency had been expecting have not yet arrived.

“Hopefully some or all of them are on a U.S. military base being processed,” he said. 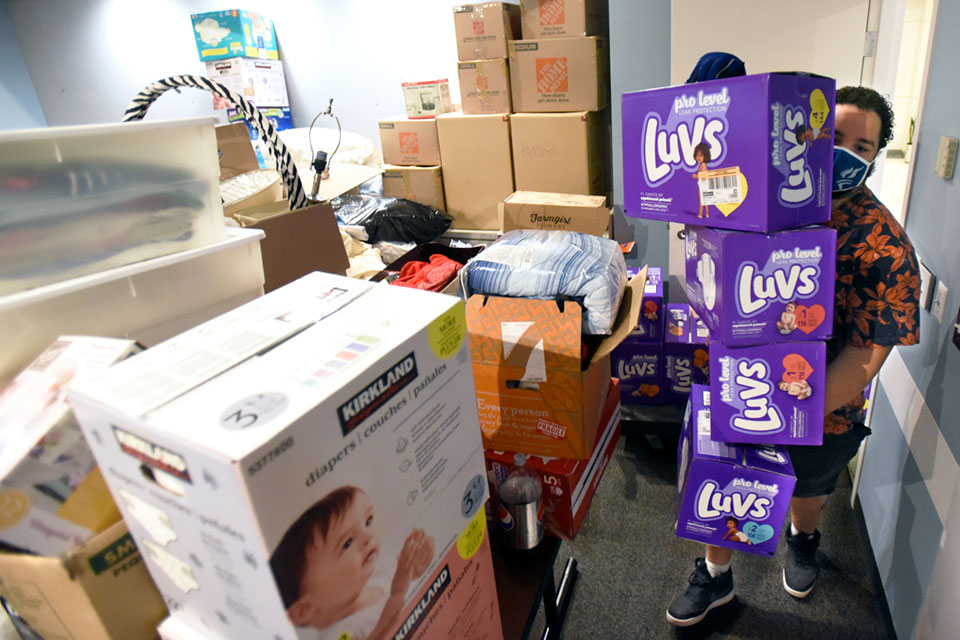 FILE - In this Tuesday, Aug. 31, 2021, file photo, Berny Lopez, an operations specialist for Lutheran Immigration and Refugee Service, moves donated diapers at the organization's drop-off site for items to help refugees from Afghanistan, in Baltimore. Many different religion groups across the U.S. are gearing up to assist the thousands of incoming refugees. (AP Photo/Steve Ruark, File)

Ademi and Koehlinger said individuals and local congregations have volunteered to help with resettlement. Some have worked with refugees before, while others are newcomers motivated by the desperate news out of Afghanistan.

The humanitarian arm of The Church of Jesus Christ of Latter-day Saints has been providing personal hygiene items, underwear, sandals and toys to refugees at an air base in Qatar, church spokesman Doug Anderson said.

Widely known as the Mormon church, it has also been distributing supplies to the thousands of Afghans temporarily sheltered at Ramstein Air Base in Germany. And it is working with the U.S. military to provide aid to the 10,000 refugees expected to arrive at Fort McCoy in Wisconsin, from where they will be relocated in communities across the country.

The nonprofit recently furnished three apartments in the Dallas area with everything from the “doormat to the food in the fridge,” Halabi said, and is collecting supplies from pots and microwaves to pasta, sugar and cleaning agents as it prepares for additional arrivals.

Beyond the response from Muslim Americans, Halabi said she is heartened by how different faith groups have mobilized to help refugees: “It’s amazing from everybody.”