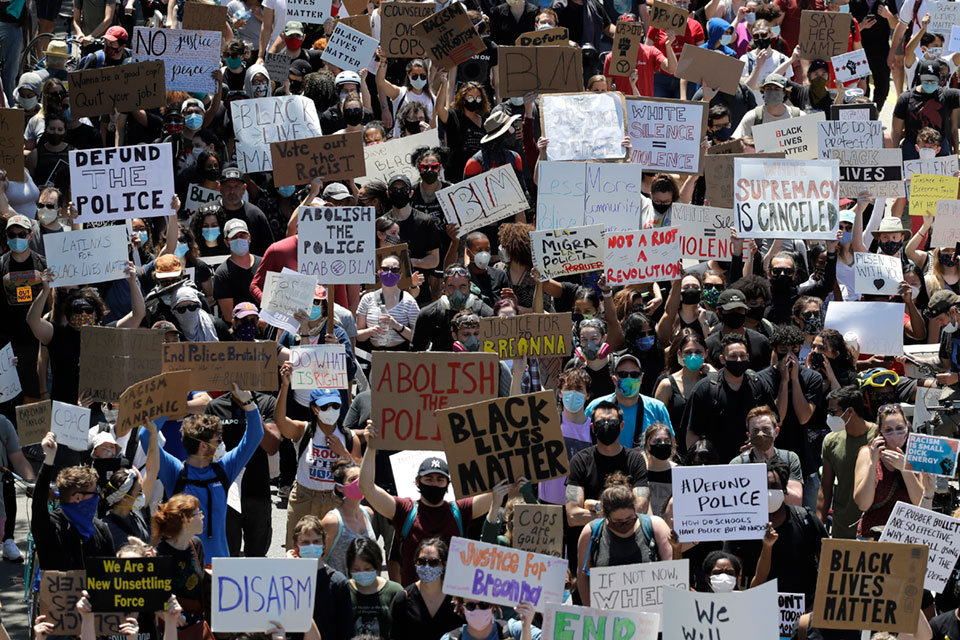 The federal government deliberately targeted Black Lives Matter protesters via heavy-handed criminal prosecutions in an attempt to disrupt and discourage the global movement that swept the nation last summer in the wake of the Minneapolis police killing of George Floyd, according to a new report released Wednesday by The Movement for Black Lives.

Movement leaders and experts said the prosecution of protesters over the past year continues a century-long practice by the federal government, rooted in structural racism, to suppress Black social movements via the use of surveillance tactics and other mechanisms.

“The empirical data and findings in this report largely corroborate what Black organizers have long known intellectually, intuitively, and from lived experience about the federal government’s disparate policing and prosecution of racial justice protests and related activity,” the report stated.

The report, which was first shared with The Associated Press, argues that as the uprisings in the summer of 2020 increased, so did police presence, the deployment of federal agents and prosecution of protesters.

Titled “Struggle For Power: The Ongoing Persecution of Black Movement By The U.S. Government," the report details how policing has been used historically as a major tool to deter Black people from engaging in their right to protest and weaken efforts to draw attention to issues impacting Black Americans. It also drew a comparison to how the government used Counterintelligence Program techniques to “disrupt the work of the Black Panther Party and other organizations fighting for Black liberation.” 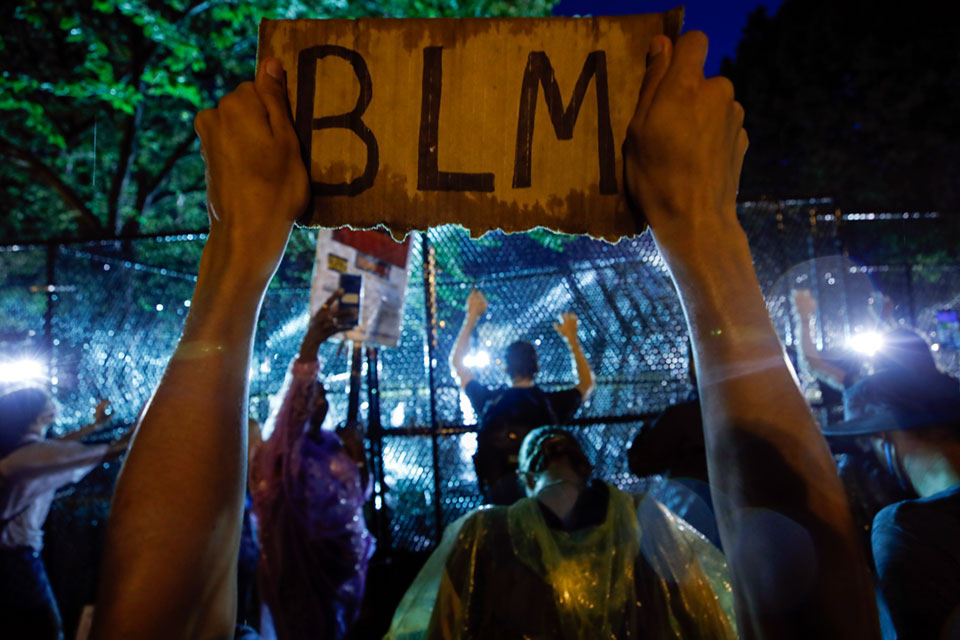 FILE - In this June 4, 2020, file photo, demonstrators protest near the White House in Washington, over the death of George Floyd, a black man who was in police custody in Minneapolis. The federal government deliberately targeted Black Lives Matter protesters via heavy-handed criminal prosecutions in an attempt to disrupt and discourage the global movement that swept the nation last summer in the wake of the police killing of George Floyd, according to a new report released Wednesday, Aug. 18, 2021, by The Movement for Black Lives. (AP Photo/Alex Brandon, File)

“We want to really show how the U.S. government has continued to persecute the Black movement by surveillance, by criminalizing protests, and by using the criminal legal system to prevent people from protesting and punishing them for being engaged in protests by attempting to curtail their First Amendment rights,” said Amara Enyia, The Movement for Black Lives' policy research coordinator.

“It is undeniable that racism plays a role,"

In the report, published in partnership with the Creating Law Enforcement Accountability & Responsibility clinic at City University of New York School of Law, The Movement for Black Lives is calling for amnesty for all protesters involved in the nationwide protests.

The group, also known as M4BL, is demanding reparations from the government that includes an acknowledgment and an apology for the long history of targeting movements “in support of Black life and Black liberation.” It also is pushing for passage of the BREATHE Act, proposed federal legislation that would radically transform the nation’s criminal justice system, and ending the use of Joint Terrorism Task Forces in local communities.

The report also points to the stark difference in how the government handled the COVID-19 protests against local government shutdowns and mask mandates amid the pandemic during the same period. It analyzes 326 criminal cases initiated by U.S. federal prosecutors over alleged conduct related to protests in the wake of Floyd's murder and the police killings of other Black Americans, from May 31, 2020, to Oct. 25, 2020.

A key finding of the report was that the push to use federal charges against protesters came from top-down directives from former President Donald Trump and former Attorney General William Barr. M4BL and the Creating Law Enforcement Accountability & Responsibility clinic, also known as CLEAR, found that in 92.6% of the cases, there were equivalent state level charges that could have been brought against defendants.

Among those cases where comparable state level charges could have been brought, 88% of the federal criminal charges carried more severe potential sentences than the equivalent state criminal charges for the same or similar conduct.

“We saw U.S. Attorney General Bill Barr overnight go from expressing some level of sympathy for racial justice protesters to labeling them as radical and violent agitators with absolutely no basis for that sort of characterization,” said Ramzi Kassem, founding director of CLEAR and a law professor at the City University of New York, adding that Barr and Trump used the arrests and prosecutions to justify the “hostile rhetoric” aimed at protesters. “All of this was very transparently aimed at disrupting a Black-led movement for social justice that was happening both spontaneously and in an organized fashion nationwide.” 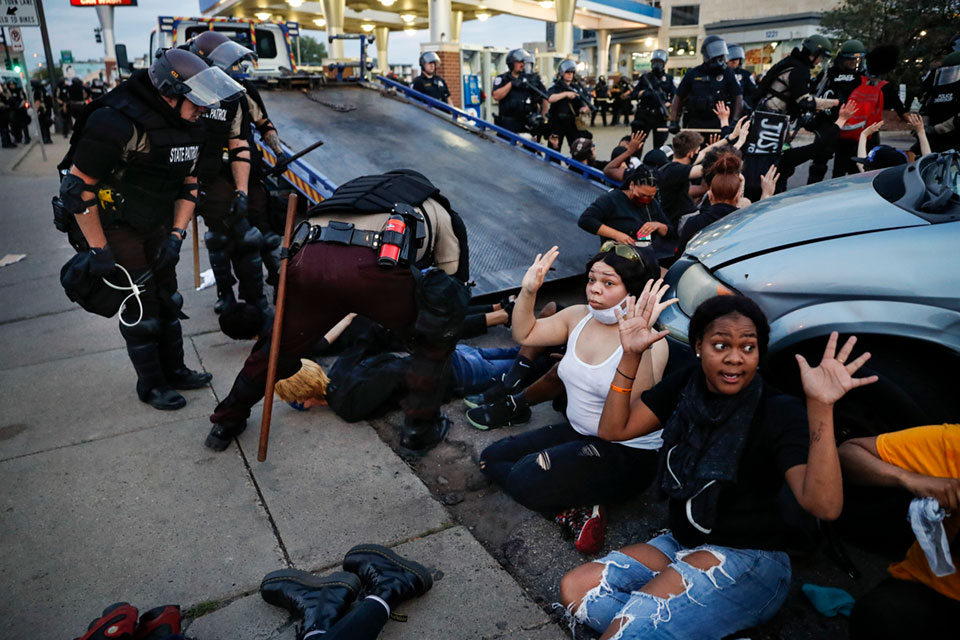 FILE - In this May 31, 2020, file photo, protesters raise their hands on command from police as they are detained prior to arrest and processing at a gas station on South Washington Street in Minneapolis. The federal government deliberately targeted Black Lives Matter protesters via heavy-handed criminal prosecutions in an attempt to disrupt and discourage the global movement that swept the nation last summer in the wake of the police killing of George Floyd, according to a new report released Wednesday, Aug. 18, 2021, by The Movement for Black Lives. (AP Photo/John Minchillo, File)

Seventy-two cases, or 22.1%, involved charges with mandatory minimum sentences. And 67 cases, or 20.6%, involved offenses where defendants are alleged to “have attempted, conspired, or aided and abetted an underlying crime without having actually committed the underlying criminal conduct.”

Richard Wallace, founder of Equity and Transformation in Chicago, said over the past summer he witnessed overly aggressive policing by law enforcement officers who levied accusations of rioting and looting at protesters who were peacefully protesting. Wallace said he is deeply concerned for those who have been charged. 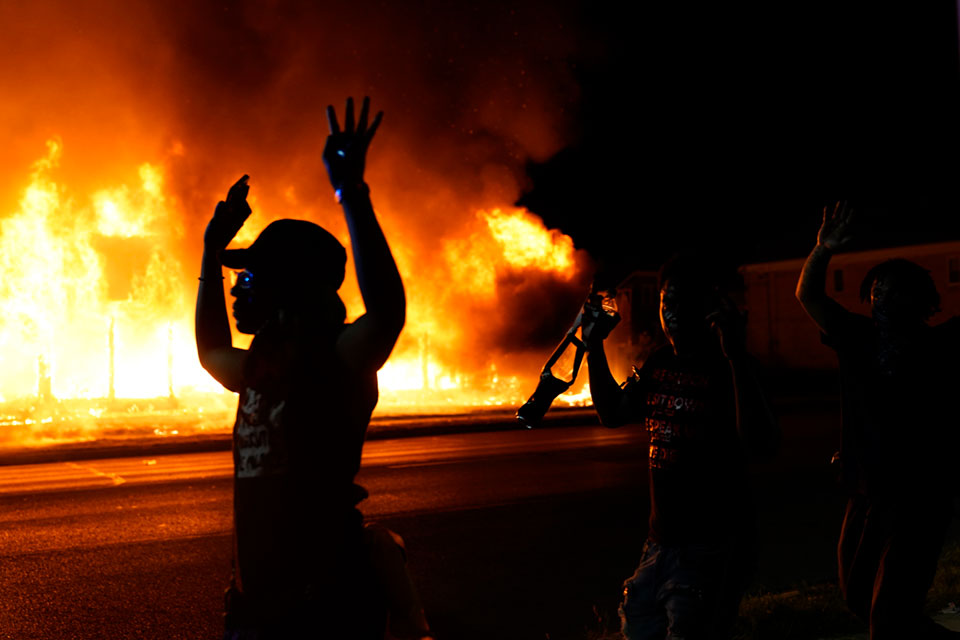 FILE - In this Aug. 24, 2020, file photo, protesters walk past police with their arms up, in Kenosha, Wis., as a building burns in the background. The federal government deliberately targeted Black Lives Matter protesters via heavy-handed criminal prosecutions in an attempt to disrupt and discourage the global movement that swept the nation last summer in the wake of the police killing of George Floyd, according to a new report released Wednesday, Aug. 18, 2021, by The Movement for Black Lives. (AP Photo/David Goldman, File)

“Coming from Chicago, where (Black Panther Party leader) Fred Hampton was killed and where, Martin Luther King came and said this is one of the most segregated cities he ever saw, we have a very keen historic lens as it relates to state violence, and Black movement,” said Wallace, whose organization, also known as EAT, was founded by and for formerly incarcerated and marginalized Black people and focuses on individuals who operate within the informal economy.

“What we saw in Illinois and across the country was this reverberation of Black power. And so, at all costs, the state is about dismantling that right, dismantling that in every possible way," he said.

The report also raises concerns about the involvement of Joint Terrorism Task Forces and found 20 cases that explicitly referenced task force involvement. The government “greatly exaggerated” the threat of violence from protesters, the report says.

“Regardless of how we are often painted, activists are people who have the audacity to believe that we can live in a better world, where people are safe, where people are not afraid of being murdered by the police,” Green said. “There are attempts to stifle our movement but it is truly a reflection to our supporters, to our allies, and to the folks who showed up in the streets last year, of how beautiful and powerful this movement is.”