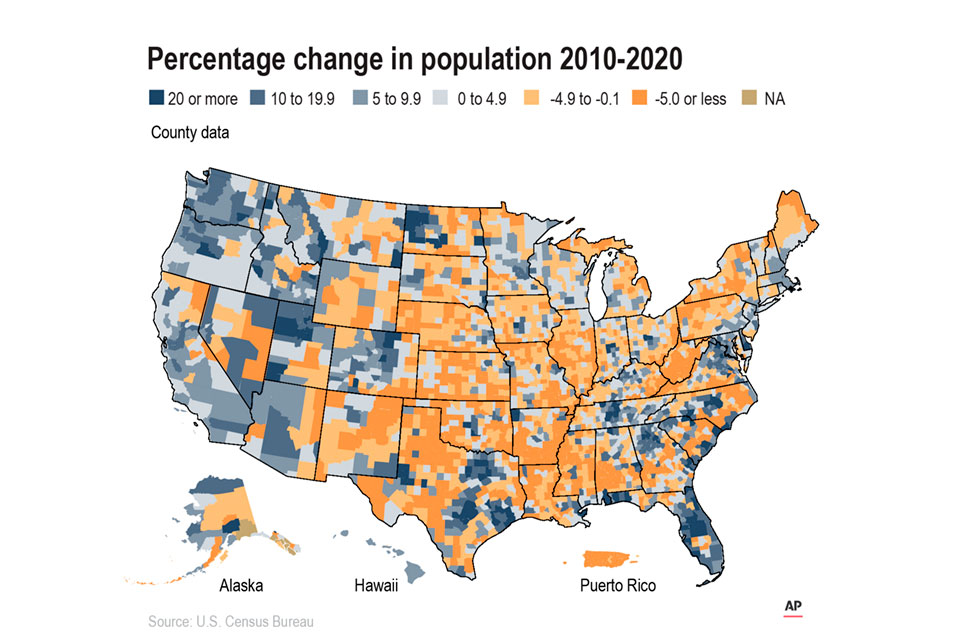 No racial or ethnic group dominates for those under age 18, and white people declined in numbers for the first time on record in the overall U.S. population as the Hispanic and Asian populations boomed this past decade, according to the 2020 census data.

The figures released Thursday by the U.S. Census Bureau offered the most detailed portrait yet of how the country has changed since 2010 and will also be instrumental in redrawing the nation's political maps.

The numbers are sure to set off an intense partisan battle over representation at a time of deep national division and fights over voting rights. The numbers could help determine control of the House in the 2022 elections and provide an electoral edge for years to come.

The data also will shape how $1.5 trillion in annual federal spending is distributed.

The data offered a mirror not only into the demographic changes of the past decade, but also a glimpse of the future. To that end, they showed there is now no majority racial or ethnic group for people younger than 18, as the share of non-Hispanic whites in the age group dropped from 53.5% to 47.3% over the decade.

The share of children in the U.S. declined because of falling birth rates, while the share of adults grew, driven by aging baby boomers. Adults over 18 made up more than three-quarters of the population in 2020, or 258.3 million people, an increase of more than 10% from 2010. However, the population of children under age 18 dropped from 74.2 million in 2010 to 73.1 million in 2020.

“If not for Hispanics, Asians, people of two or more races, those are the only groups underage that are growing,” said William Frey, a senior fellow at Brookings’ Metropolitan Policy Program. “A lot of these young minorities are important for our future growth, not only for the child population but for our future labor force.” 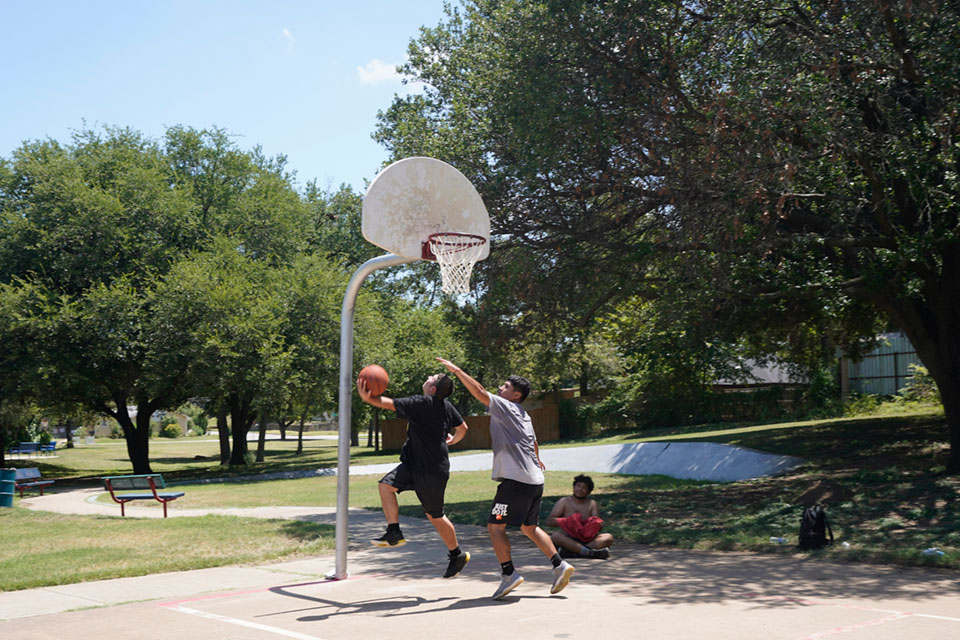 Oscar Benitez, left, goes for layup against his friend Renaldo Banderas while playing ball in a park in Fort Worth, Texas, Tuesday, Aug. 10, 2021. The Census Bureau is due to release new data on the nation's changing population. The numbers scheduled to come out Thursday, Aug. 12 will show that dozens of counties across 18 states no longer have a majority racial or ethnic group. (AP Photo/LM Otero)

“The 2020 Census confirmed what we have known for years — the future of the country is Latino,” said Arturo Vargas, CEO of the National Association of Latino Elected and Appointed Officials Educational Fund.

The share of the white population fell from 63.7% in 2010 to 57.8% in 2020, the lowest on record, driven by falling birthrates among white women compared with Hispanic and Asian women. The number of non-Hispanic white people shrank from 196 million in 2010 to 191 million.

White people continue to be the most prevalent racial or ethnic group, though that changed in California, where Hispanics became the largest racial or ethnic group, growing from 37.6% to 39.4% over the decade, while the share of white people dropped from 40.1% to 34.7%. California, the nation’s most populous state, joined Hawaii, New Mexico and the District of Columbia as a place where non-Hispanic white people are no longer the dominant group.

“The U.S. population is much more multiracial and much more racially and ethnically diverse than what we have measured in the past,” said Nicholas Jones, a Census Bureau official. 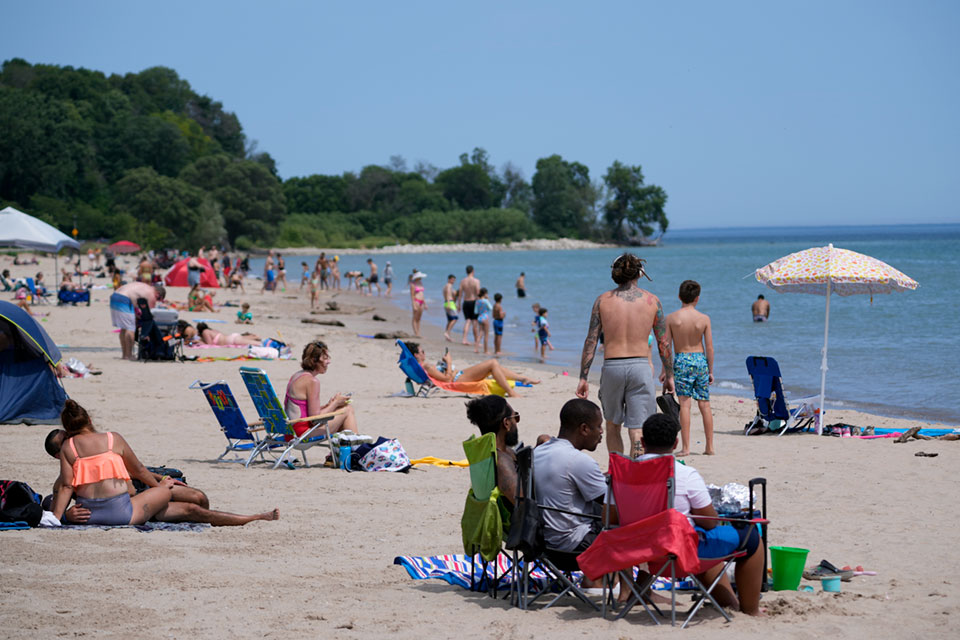 People enjoy a hot summer day Thursday, Aug. 12, 2021, at Bradford Beach in Milwaukee. The Census Bureau has issued its most detailed portrait yet of how the U.S. has changed over the past decade. The agency on Thursday released a trove of demographic data that will used to redraw political maps across an increasingly diverse country. (AP Photo/Morry Gash)

Some demographers cautioned that the white population was not shrinking as much as shifting to multiracial identities. The number of people who identified as belonging to two or more races more than tripled from 9 million people in 2010 to 33.8 million in 2020. They now account for 10% of the U.S. population.

People who identify as a race other than white, Black, Asian, American Indian, Native Hawaiian or Pacific Islander — either alone or in combination with one of those races — jumped to 49.9 million people, surpassing the Black population of 46.9 million people as the nation’s second-largest racial group, according to the Census Bureau.

But demographers said that may have to do with Hispanic uncertainty about how to answer the race question on the census form, as well as changes the Census Bureau made in processing responses and how it asked about race and ethnicity in order to better reflect the nation's diversity.

The data release offers states the first chance to redraw their political districts in a process that is expected to be particularly brutish since control over Congress and statehouses is at stake. 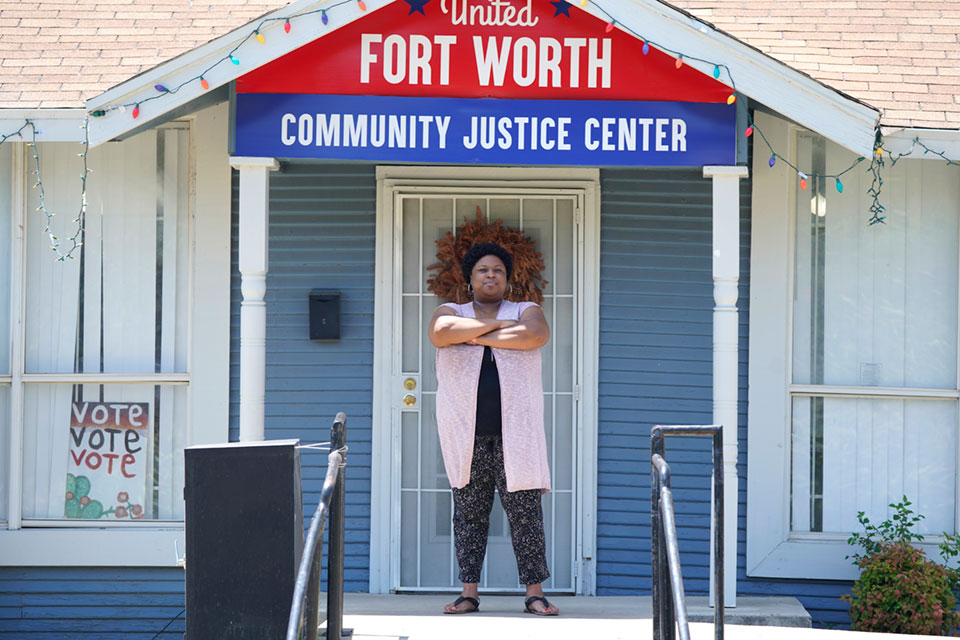 Pamela Young, lead criminal justice organizer for United Fort Worth, a grassroots community organization poses for a photo in Fort Worth, Texas, Tuesday, Aug. 10, 2021. The Census Bureau is due to release new data on the nation's changing population. The numbers scheduled to come out Thursday, Aug. 12 will show that dozens of counties across 18 states no longer have a majority racial or ethnic group. (AP Photo/LM Otero)

It also provides the first opportunity to see, on a limited basis, how well the Census Bureau fulfilled its goal of counting every U.S. resident during what many consider the most difficult once-a-decade census in recent memory. Communities of color have been undercounted in past censuses. The agency likely will not know how good a job it did until next year, when it releases a survey showing undercounts and overcounts.