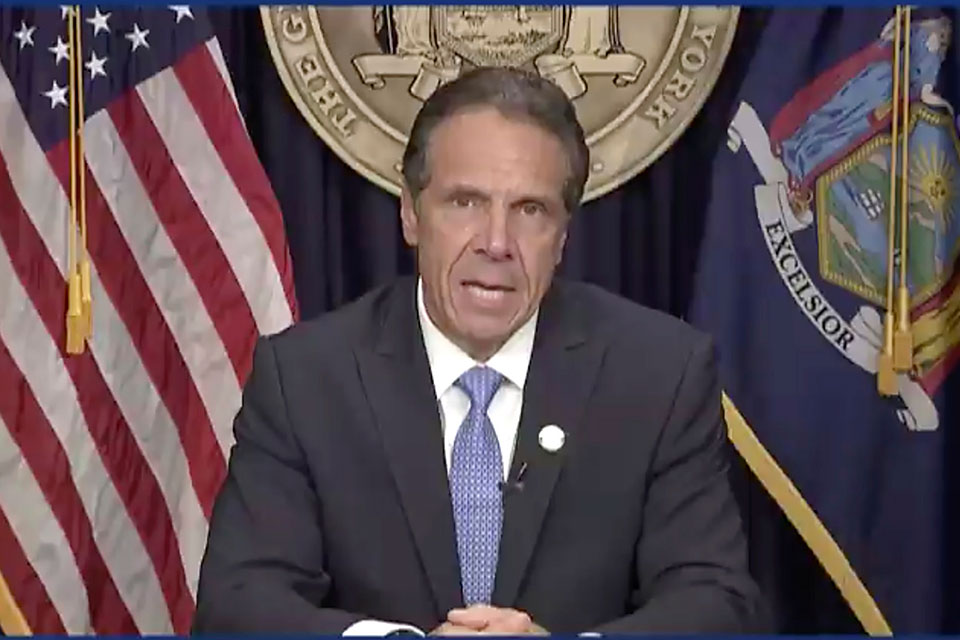 NEW YORK (AP) — Gov. Andrew Cuomo announced his resignation Tuesday over a barrage of sexual harassment allegations in a fall from grace a year after he was widely hailed nationally for his detailed daily briefings and leadership during some of the darkest days of the COVID-19 pandemic.

In a televised address, the 63-year-old Democrat emphatically denied intentionally showing any disrespect toward women but said that fighting back against what he called the “politically motivated” attack on him would subject the state to months of turmoil, and “I cannot be the cause of that.”

“The best way I can help now is if I step aside and let government get back to government,” Cuomo said.

The three-term Democratic governor’s decision, which will take effect in two weeks, was announced as momentum built in the Legislature to remove him by impeachment. It came after New York’s attorney general released the results of an investigation that found Cuomo sexually harassed at least 11 women.

Investigators said he subjected women to unwanted kisses; groped their breasts or buttocks or otherwise touched them inappropriately; made insinuating remarks about their looks and their sex lives; and created a work environment “rife with fear and intimidation.”

First woman to step in as Governor of New York

Lt. Gov. Kathy Hochul, a 62-year-old Democrat and former member of Congress from the Buffalo area, will become the state’s 57th governor and the first woman to hold the post. 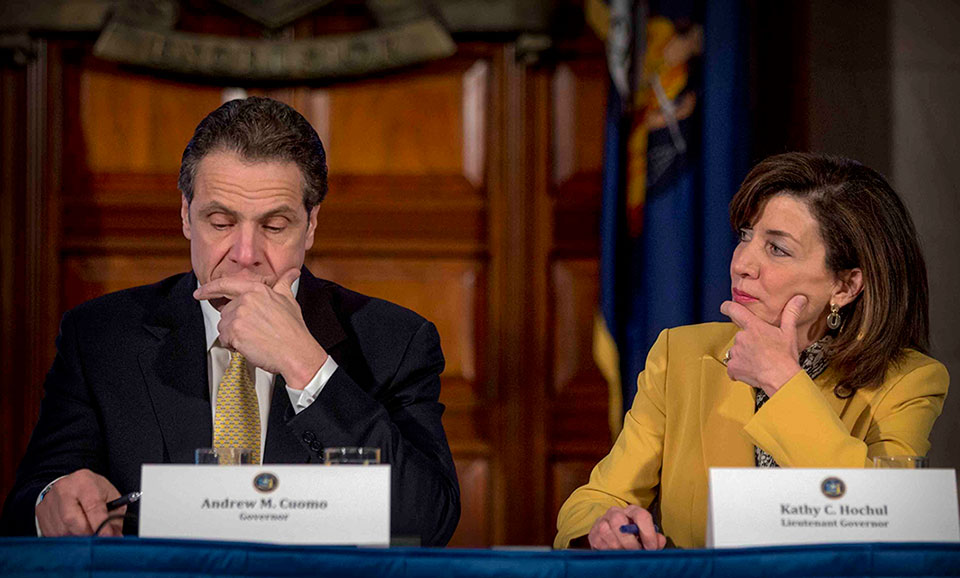 This photo from Wednesday, Feb. 25, 2015, shows New York Gov. Andrew Cuomo, left, and Lt. Gov. Kathy Hochul during a cabinet meeting at the Capitol in Albany, N.Y. Cuomo faces possible impeachment following findings from an independent investigation overseen by state Attorney General Letitia James. If the governor resigns or is impeached, Hochul stands poised to become New York's first female governor in a state whose last three male governors have been marred by scandal. (AP Photo/Mike Groll, File)"I agree with Governor Cuomo’s decision to step down. It is the right thing to do and in the best interest of New Yorkers," Hochul tweeted.

The #MeToo-era scandal cut short not just a career but a dynasty: Cuomo’s father, Mario Cuomo, was governor in the 1980s and ’90s, and the younger Cuomo was often mentioned as a potential candidate for president, an office his father famously contemplated seeking. Even as the scandal mushroomed, Cuomo was planning to run for reelection in 2022.

Cuomo still faces the possibility of criminal charges, with a number of prosecutors around the state moving to investigate him.

The string of accusations that spelled the governor’s downfall began to unfold in news reports last December and went on for months.

Cuomo called some of the allegations fabricated, forcefully denying he touched anyone inappropriately. But he acknowledged making some aides uncomfortable with comments he said he intended as playful, and he apologized for some of his behavior.

He portrayed some of the encounters as misunderstandings attributable to “generational or cultural” differences, a reference in part to his upbringing in an affectionate Italian American family.

As a defiant Cuomo clung to office, state lawmakers launched an impeachment investigation, and nearly the entire Democratic establishment in New York deserted him — not only over the accusations, but also because of the discovery that his administration had concealed thousands of COVID-19 deaths among nursing home patients.

The harassment investigation ordered up by the attorney general and conducted by two outside lawyers corroborated the women’s accounts and added lurid new ones. The release of the report left the governor more isolated than ever, with some of his most loyal supporters abandoning him and President Joe Biden joining those calling on him to resign.

His accusers included an aide who said Cuomo groped her breast at the governor’s mansion. Investigators also the governor’s staff retaliated against one of his accusers by leaking confidential personnel files about her.

Read also: What Gov. Andrew Cuomo’s Accusers Felt, in Their Own Words

As governor, Cuomo touted himself as an example of a “progressive Democrat” who gets things done: Since taking office in 2011, he helped push through legislation that legalized gay marriage, began lifting the minimum wage to $15 and expanded paid family leave benefits. He also backed big infrastructure projects, including airport overhauls and construction of a new bridge over the Hudson River that he named after his father.

At the same time the behavior that got him into trouble was going on, he was publicly championing the #MeToo movement and surrounding himself with women’s rights activists, signing into law sweeping new protections against sexual harassment and lengthening the statute of limitations in rape cases.

His national popularity soared during the harrowing spring of 2020, when New York became the epicenter of the nation’s coronavirus outbreak.

His tough-minded but empathetic response made for riveting television well beyond New York, and his stern warnings to people to stay home and wear masks stood in sharp contrast to President Donald Trump’s brush-off of the virus. His briefings won an international Emmy Award, and he went on to write a book on leadership in a crisis.

But even those accomplishments were soon tainted when it was learned that the state’s official count of nursing home deaths had excluded many patients who had been transferred to hospitals before they succumbed. A Cuomo aide acknowledged the administration feared the true numbers would be “used against us” by the Trump White House.

The U.S. Justice Department is investigating the state’s handling of data on nursing home deaths. In addition, the state attorney general is looking into whether Cuomo broke the law in using members of his staff to help write and promote his book, from which he stood to make more than $5 million.

The governor had also increasingly come under fire over his rough and sometimes vindictive treatment of fellow politicians and his own staff, with former aides telling stories of a brutal work environment.

Cuomo has been divorced since 2005 from the author and activist Kerry Kennedy, a member of the Kennedy family, and was romantically involved up until 2019 with TV lifestyle personality Sandra Lee. He has three adult daughters.

During his resignation speech, he directly addressed his daughters, saying: “I want them to know, from the bottom of my heart: I never did, and I never would, intentionally disrespect a woman or treat a woman differently than I would want them treated.

"Your dad made mistakes. And he apologized.

"And he learned from it. And that’s what life is all about.”

He gained political experience early on as his father’s hard-nosed and often ruthless campaign manager, and went on to become New York attorney general and U.S. housing secretary under President Bill Clinton before getting elected governor in 2010.

New York has seen a string of high-level political figures brought down in disgrace in recent years.

Gov. Eliot Spitzer resigned in 2008 in a call-girl scandal. Rep. Anthony Weiner went to prison for sexting with a 15-year-old girl. Attorney General Eric Schneiderman stepped down in 2018 after four women accused him of abuse. And the top two leaders in the Legislature were convicted of corruption.