Weary US Businesses Confront New Round of Mask Mandates 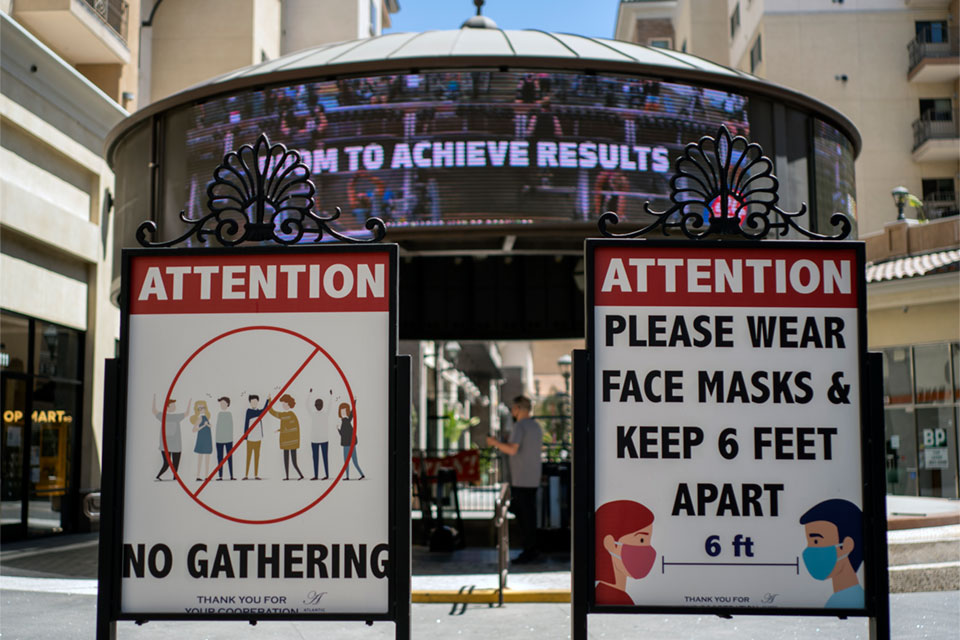 Businesses large and small, from McDonald’s and Home Depot to local yoga studios, are reinstituting mask mandates as U.S. coronavirus cases rise. Bars, gyms and restaurants across the country are requiring vaccines to get inside.

After a largely mask-free summer, it's a reversal no one wanted to see, brought on by the fast-spreading delta variant and new guidance from the U.S. Centers for Disease Control. But business owners and workers say they will do what they can to keep their doors open and not slow the economic gains of the last few months.

“We’ve already been through the worst of the challenges when we shut down the indoors last year,”

said Brack May, the chef and owner of Cowbell, a New Orleans burger joint. “Let’s just get ahead of the curve here.”

May recently began requiring customers to show their vaccine cards for indoor dining. He said he wants to protect his workers, who are required to be vaccinated but have young children at home, as well as his neighborhood, where some musicians recently contracted the coronavirus.

May expects that eventually, vaccine rules like his will be commonplace. Next month, New York City will start requiring vaccinations to enter restaurants, gyms and theaters. 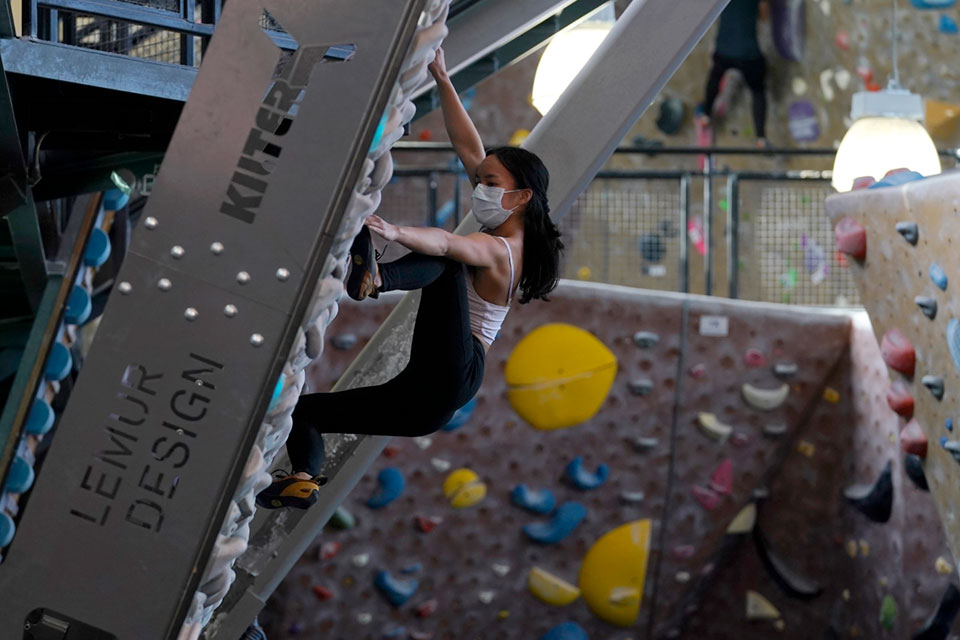 FILE — In this March 4, 2021 file photo Gen Til wears a protective face mask while working out at Planet Granite climbing gym in San Francisco. Health officials in San Francisco and six other Bay Area counties announced Monday, Aug. 2, 2021 that they are reinstating a mask mandate for all indoor settings as COVID-19 infections surge because of the highly contagious delta variant. (AP Photo/Jeff Chiu, File)

The shifting guidance has caused confusion over which rules to enforce and how. Walmart and Target, for instance, recently began requiring masks for employees __ but not customers __ in areas where virus transmission rates are high. McDonald’s is requiring masks for both employees and customers. Home Depot’s mask mandate is nationwide.

A handful of places, like Louisiana, the San Francisco Bay area and Las Vegas, are mandating masks indoors.

Many business owners didn’t wait for the CDC or their local governments before acting. In mid-July, Tamra Patterson reinstituted a mask mandate and reduced seating capacity from 200 to 65 at Chef Tam’s Underground Cafe, the restaurant she owns in Memphis, Tennessee.

“I need every dollar and dime and penny I can get, but if I don’t have employees healthy, I don’t have a business. If customers are sick, I have nothing,” Patterson said.

Customers are generally receptive to the mask mandate, Patterson said. Only one has walked out.

A matter of time 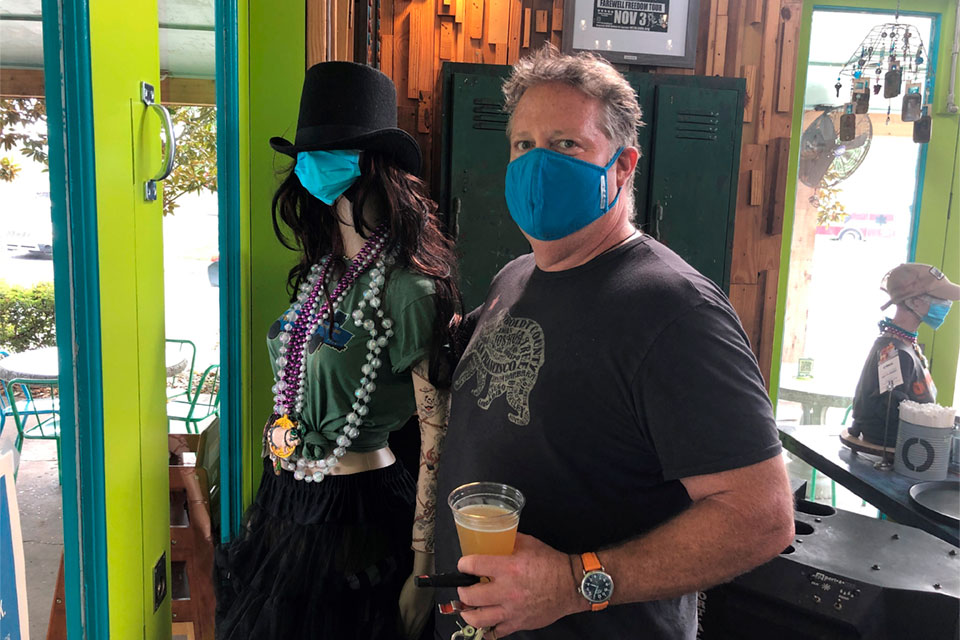 Brack May poses with a masked mannequin in his New Orleans restaurant, Cowbell, on Friday, Aug. 6, 2021. May’s eatery is among the first in New Orleans to require proof of vaccination against COVID-19 for indoor diners. He said some have been angered by the requirement but others welcome it. (AP Photo/Kevin McGill)

“We’re a tourist town, so it was just a matter of time before it reached us again,” said Lisa Wines, a PanTerra employee. Most people are fine with the new mandate, she said, but some turn around and stomp out of the store.

Not every business supports the mandates. Basilico's Pasta e Vino, a restaurant in Huntington Beach, California, has railed against masks on social media. A sign on its door requires patrons to prove that they're unvaccinated.

Dru W., a grocery employee in Houston who asked not to use his full name for fear of reprisals at work, said he was fully vaccinated months ago and enjoys the freedom it gives him to go without a mask. Few stores around him are enforcing the new CDC guidelines, he said, and he won’t either.

“I didn’t get both my doses and deal with the rather gnarly side effects only to be told to go back to the way things were during the pandemic,” he said.

But other retail workers see masks as an important way to end the pandemic. Austin Ray Shanks, who works at a Walmart in Monroe, Washington, said he finds masks uncomfortable but necessary. He's disappointed that many customers at his store refuse to wear them.

Marshall Crawley said his gym in Morrisville, North Carolina, recently announced that it would require masks for both vaccinated and unvaccinated patrons. But the rule isn’t being enforced, he said. 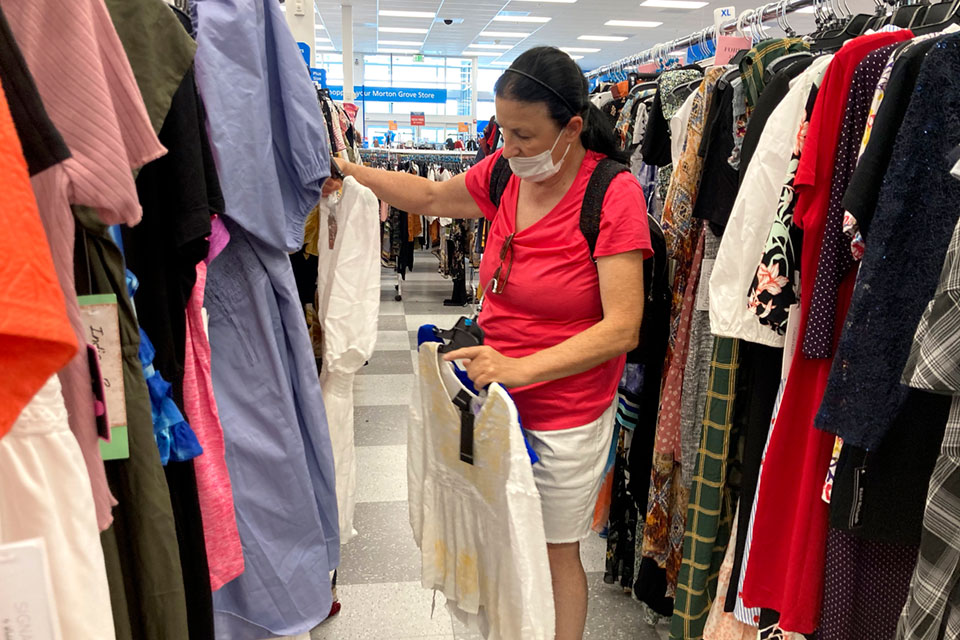 A consumer shops as she wears a mask at a retail store in Morton Grove, Ill., Wednesday, July 21, 2021. Chicago public health officials say that COVID-19 cases caused by the delta variant are rapidly increasing in the city, and that by next month the strain will likely be the dominant form of the virus in the city. (AP Photo/Nam Y. Huh)

“It doesn’t really feel like it is doing much good wearing a mask when everyone around me is not," said Crawley, a client manager for J&J Editorial, a managed services company for scholarly publishing.

Crawley thinks the CDC went too far when it told vaccinated people they could remove their masks this spring. Now, he said, it will be too hard to convince people to put them back on.

Sticking to the basics

Jose Backer, who works in customer service at a food packaging manufacturer in Los Angeles County, said his company began letting vaccinated workers remove their masks earlier this year. But soon everyone stopped wearing them. That angered Backer, who doesn’t want a repeat of a COVID-19 outbreak that sickened him and others at his workplace last year. He's relieved that his county is requiring masks for everyone again.

The new wave of mandates give some comfort to companies that never gave up on masks, even when U.S. cases ebbed earlier this summer.

Liz Manasek, the co-owner of Warner Bodies, a custom truck manufacturer in Elwood, Indiana, kept a mask policy in place after watching other companies struggle with different rules for vaccinated and unvaccinated workers.

About 60% of the company’s 105 employees are now vaccinated, she said. She has told employees she won’t consider removing the mandate until that level reaches 80%. 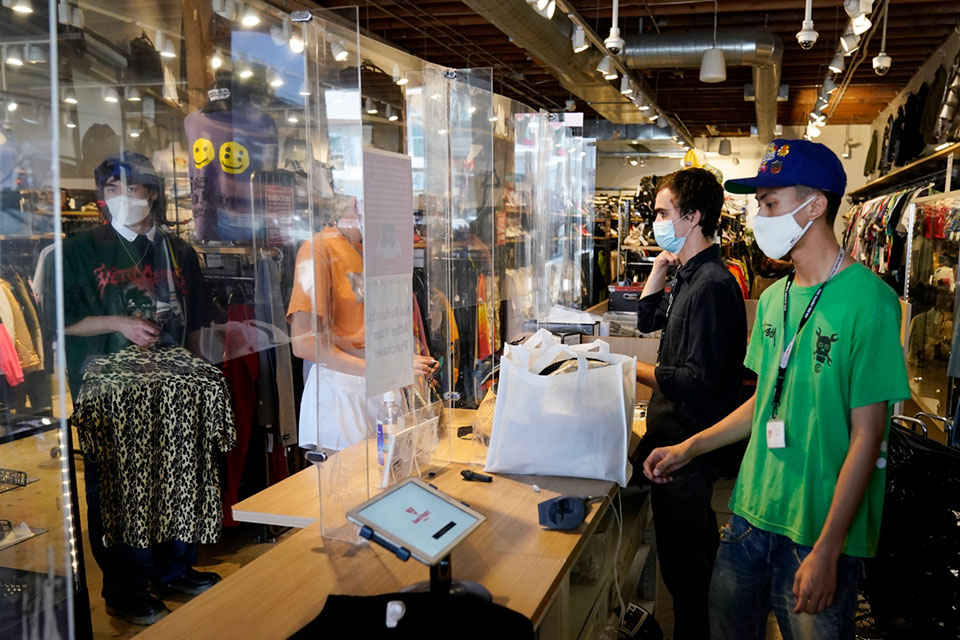 Manasek has gotten some pushback from workers, but she reminds them that the policy has been effective. Only one or two employees have tested positive for COVID-19 since the pandemic began, she said.