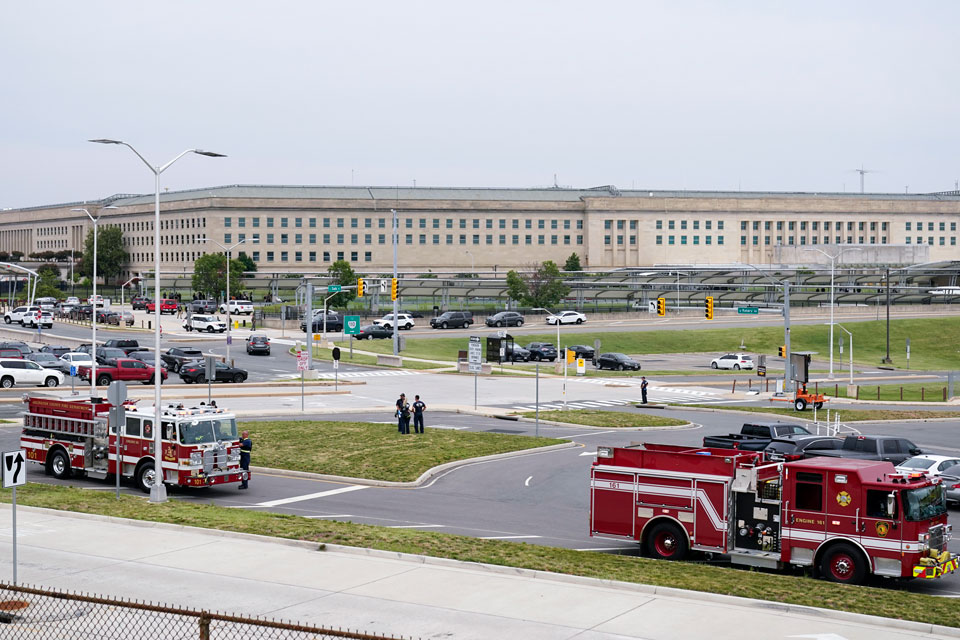 WASHINGTON (AP) — A Pentagon police officer died after being stabbed Tuesday during a burst of violence at a transit center outside the building, and a suspect was shot by law enforcement and died at the scene, officials said.

The Pentagon, the headquarters of the U.S. military, was temporarily placed on lockdown after someone attacked the officer on a bus platform shortly after 10:30 a.m. The ensuing violence, which included a volley of gunshots, resulted in “several casualties,” said Woodrow Kusse, the chief of the Pentagon Force Protection Agency, which is responsible for security in the facility. 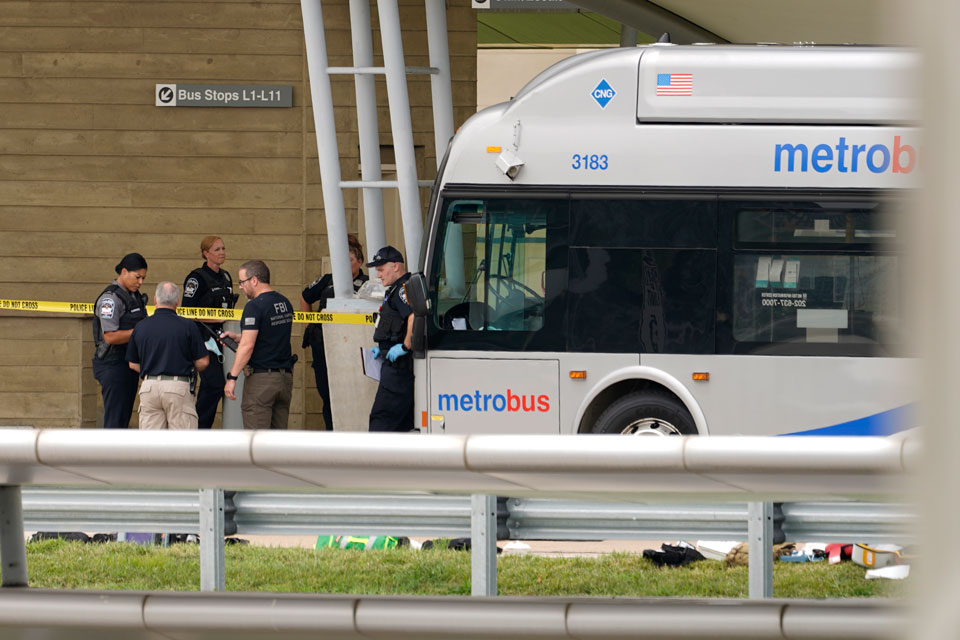 Police are looking at a scene and items are seen on the ground near a Metrobus outside the Pentagon Metro area, Tuesday, Aug. 3, 2021 at the Pentagon in Washington. A Pentagon police officer died after being stabbed Tuesday during a burst of violence at a transit station outside the building. That's according to law enforcement officials. The Pentagon officer was stabbed and later died, according to officials who were not authorized to discuss the matter and spoke to The Associated Press on condition of anonymity. (AP Photo/Andrew Harnik) 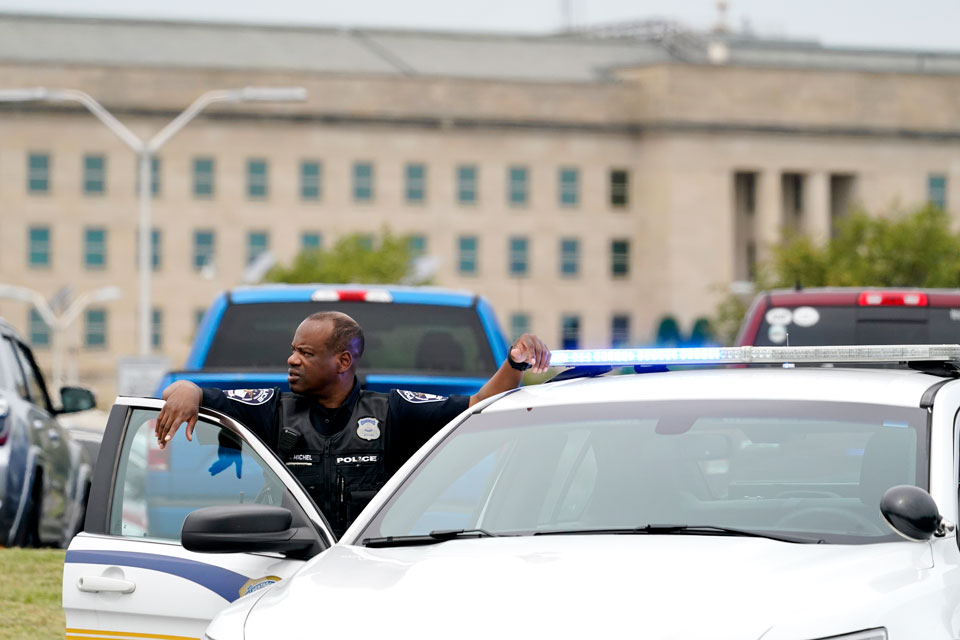 A Pentagon Police officer is seen outside the Pentagon, Tuesday, August 3, 2021 at the Pentagon in Washington. The Pentagon is on lockdown after multiple gunshots were fired near a platform by the facility's Metro station. Two people familiar with the shooting, which occurred on a Metro bus platform at the Pentagon, said at least one person was down. They spoke on condition of anonymity because they were not authorized to release information publicly. (AP Photo/Andrew Harnik) The deaths of the officer and the suspect were confirmed by officials who were not authorized to discuss the matter and spoke to The Associated Press on condition of anonymity. The Fairfax County Police Department also tweeted condolences about the officer's death.

The circumstances remained unclear even hours after the violence had ended,. But the episode on a busy stretch of the Washington area’s transportation system jangled the nerves of a region already primed to be on high alert for violence and potential intruders outside federal government buildings, particularly following the Jan. 6 riot at the Capitol.

At a Pentagon news conference, Kusse declined to confirm that the officer had been killed or provide even basic information about how the violence had unfolded or how many might be dead. He would only say that an officer had been attacked and that “gunfire was exchanged.” 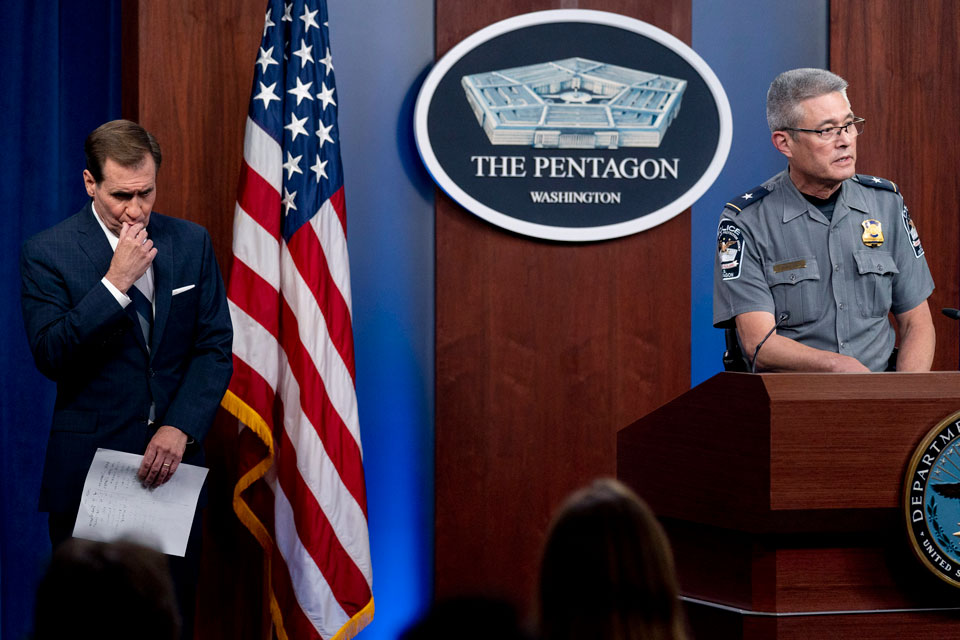 Pentagon Police Chief Woodrow Kusse, right, accompanied by Pentagon spokesman John Kirby, left, speaks during a briefing at the Pentagon in Washington, Tuesday, Aug. 3, 2021. Officials say a Pentagon officer died after being stabbed Tuesday during a burst of violence at a transit station outside the building, and a suspect was shot by law enforcement and died at the scene. (AP Photo/Andrew Harnik) Kusse and other officials declined to rule out terrorism or provide any other potential motive. But, Kusse said the Pentagon complex was secure and "we are not actively looking for another suspect at this time.” He said the FBI was leading the investigation.

The FBI issued a similar statement, confirming only that it was investigating and that there was “no ongoing threat to the public” but declining to offer details or a possible motive.

Tuesday's violence occurred on a Metro bus platform that is part of the Pentagon Transit Center, a hub for subway and bus lines. The station is steps from the Pentagon building, which is in Arlington County, Virginia, just across the Potomac River from Washington.

An Associated Press reporter near the building heard multiple gunshots, then a pause, then at least one additional shot. Another AP journalist heard police yelling “shooter.” 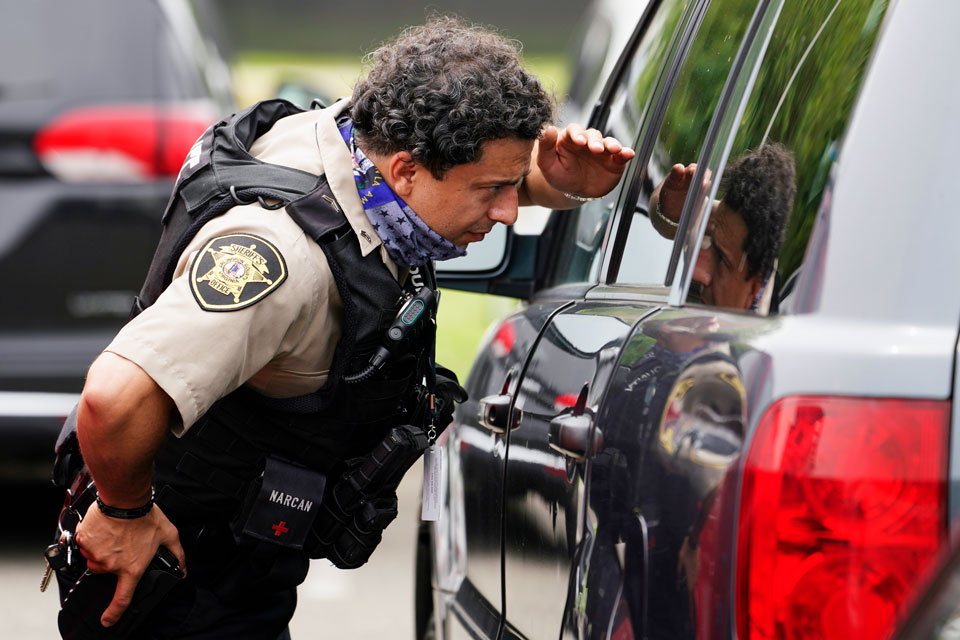 A police officer looks at a vehicle outside the Pentagon, Tuesday, Aug. 3, 2021 in Washington. Gunshots were fired Tuesday morning near the entrance of the Pentagon, resulting in multiple injuries. The facility, the headquarters of the U.S. military, was placed on lockdown. The incident occurred on a Metro bus platform that is part of the Pentagon Transit Center, the Pentagon Protection Force Protection Agency tweeted. (AP Photo/Andrew Harnik) A Pentagon announcement said the facility was on lockdown, but that was lifted after noon, except for the area around the crime scene.

Defense Secretary Lloyd Austin and Gen. Mark Milley, chairman of the Joint Chiefs of Staff, were at the White House meeting with President Joe Biden at the time of the shooting. Pentagon spokesman John Kirby said Austin returned to the building and went to the Pentagon police operations center to speak to the officers there.

It was not immediately clear whether any additional security measures might be instituted in the area.

In 2010, two officers with the Pentagon Force Protection Agency were wounded when a gunman approached them at a security screening area. The officers, who survived, returned fire, fatally wounding the gunman, identified as John Patrick Bedell.

Associated Press writers Colleen Long in Washington and Matthew Barakat and Sagar Meghani in Arlington, Va., contributed to this report.